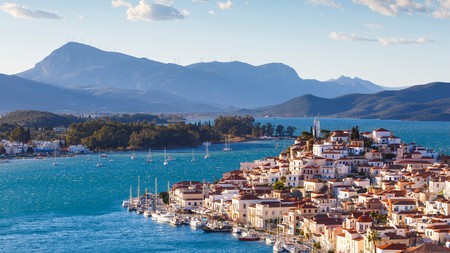 Feel like having an island holiday after discovering Athens? Check out our pick of the eight most beautiful islands within two hours of the Greek capital, all easily reachable by car or public transport from three ports.

Connected via three ports – Piraeus, Rafina and Lavrion – Athens puts travellers right on the doorstep of some of Greece’s most beautiful islands. 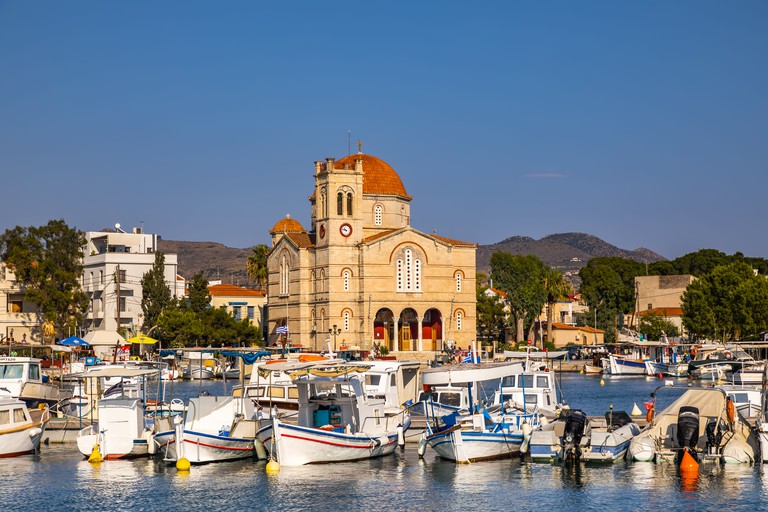 Aegina, part of the Saronic Islands, is one of the closest islands to Athens. After a 40-minute ride on a hydrofoil ferry from Piraeus, you can discover Aegina and its many charms. Explore the Temple of Aphaia, dating back to around 500 BCE, the Monastery of Saint Nektarios and Paleohora, the former medieval capital, now abandoned. The island also has an archeological museum, where you can admire ruins and walls from the Neolithic period. Aegina also has several beaches worth visiting, such as Marathonas, Kleidi and Keri beaches.

In the picturesque village of Vagia, you can book a room for two in this colourful hotel overlooking the Temple of Aphaia and the blue waters of the Saronic Gulf. Built in traditional Aeginian architecture, it’s surrounded by lush gardens and makes for a perfect romantic getaway.

Open In Google Maps
Aegina, 180 10, Greece
Give us feedback 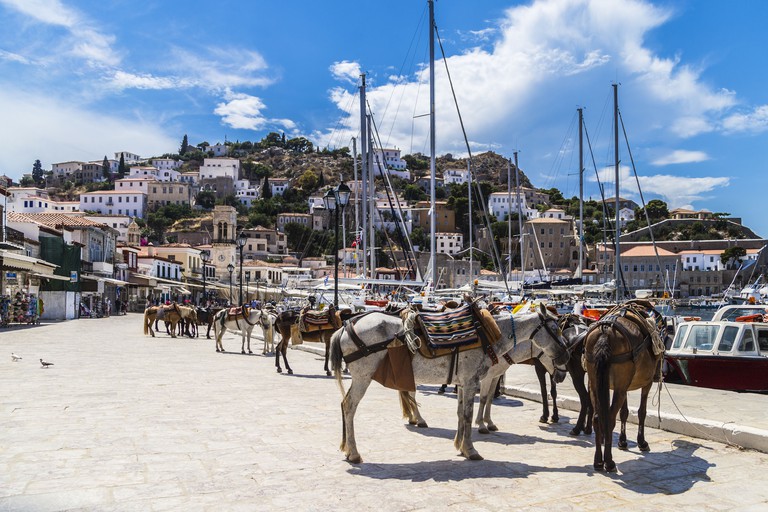 Another island in the Saronic Gulf, Hydra boasts an unspoiled character, as motor vehicles are forbidden on the island. It is therefore an excellent getaway from bustling Athens. With stunning 18th-century villas on the waterfront, little cafés and restaurants and several museums, Hydra is a paradise for hiking enthusiasts. The trek from Hydra’s town to Kamini is a particular must-see, while the secluded beaches of Bisti, Limnioniza and Agios Nikolaos are perfect for a relaxing beach day.

For a scenic stay, check out this traditional Hydra stone house with a stunning sea view. Featuring two bedrooms and accommodating up to six people, the house has been renovated and is fully equipped, making it ideal for families.

Open In Google Maps
180 40, Greece
Give us feedback 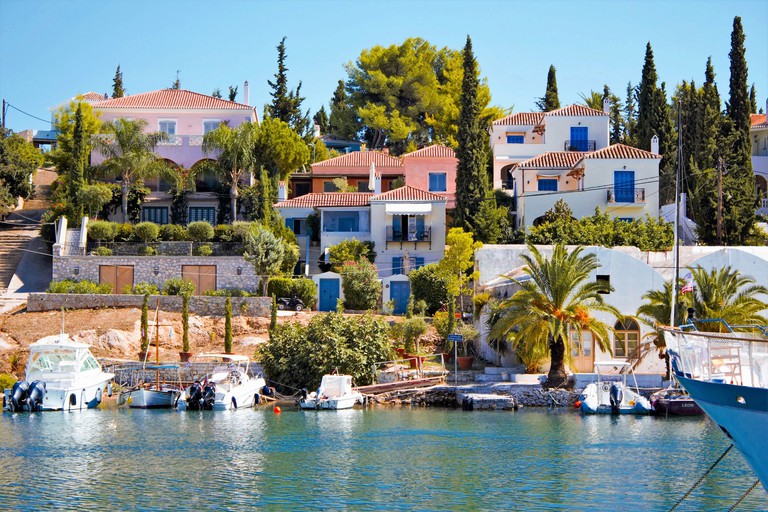 Known for its neoclassical houses, cobblestone streets and role in the Greek War of Independence, Spetses is a charming verdant island where cars are also forbidden. Just rent a scooter and go explore the island to find your little piece of paradise. Agia Anarghiri and Agia Paraskevi beaches, a few kilometres away from the main town, are ideal on hot, summer days. But don’t spend all your time at the beach – Spetses boasts interesting museums, such as the Spetses Museum or Bouboulina’s Museum.

When it comes to places to stay, this seaside maisonette near Kaiki Beach offers stunning sea views and can sleep up to five people comfortably.

Open In Google Maps
Spetses, Greece
Give us feedback 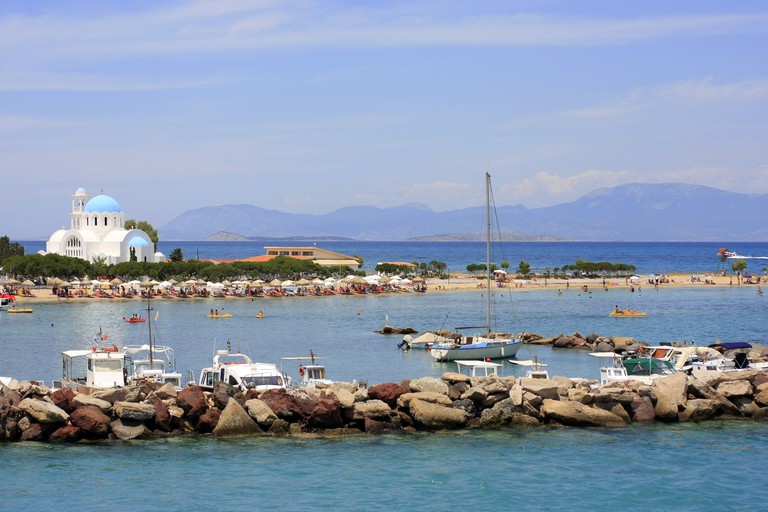 Agistri, or Angistri, is a tiny island in the Saronic Islands, close to Aegina. A short ferry ride from Athens, Agistri is a popular weekend destination. Boasting beautiful waters for swimming or diving and snorkelling alongside tranquil little villages, Agistri is a small paradise where you can relax on pebbly beaches such as Aponisos or Dragonera.

For a truly relaxing holiday, this sea-view studio sleeps up to three guests and puts you in a quiet location just off the beach in Megalochori – sit back and feel the gentle sea breeze while enjoying your wine on the balcony at night.

Open In Google Maps
Megalochori, Greece
Give us feedback 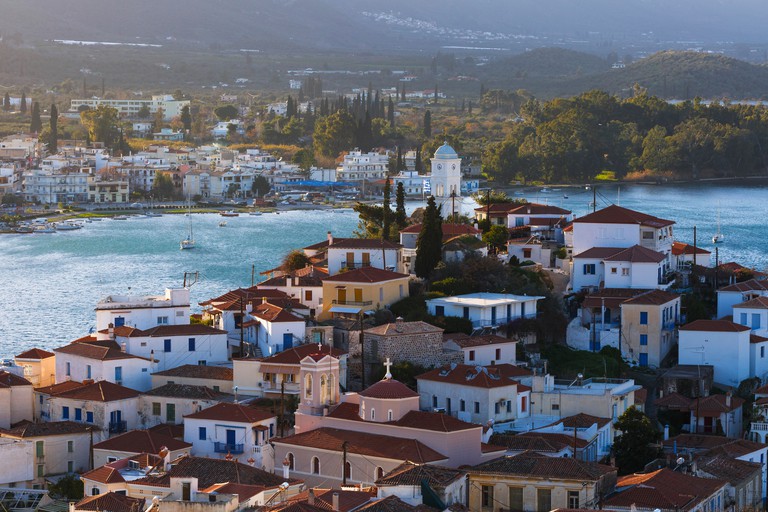 Consisting of two islands, Sferia and Kalavria, connected by an artificial canal, Poros is separated from the Peloponnese by a narrow sea channel. The island of Sferia is occupied by the town of Poros, boasting beautiful Neoclassical houses, while pine-covered Kalavria is where you will find secluded beaches and hotels. Attracting many travelers from Athens for a weekend or a day trip, Poros is home to the ruins of the Temple of Poseidon. Climb up to the clock tower to enjoy all-encompassing views over the bay.

As for where to stay, this adorable stone cottage is surrounded by pine trees and sits next to the sea, with direct access to a semi-private beach. Hosting up to five guests, it’s also a couple of minutes’ walk from Love Bay, one of the island’s most beautiful and well-organised beaches.

Open In Google Maps
180 20, Greece
Give us feedback 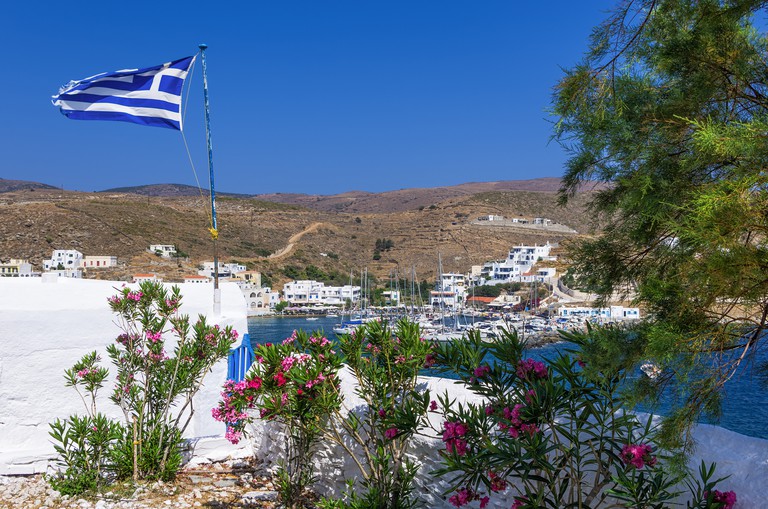 A Cycladic island which sits well under the tourist radar, Kythnos has picturesque villages, crystal-clear waters and golden beaches. The island may not be a touristy destination, but it attracts many visitors with its hot springs. Tranquil and serene, with a traditional character, Kythnos is an unspoiled gem worth discovering.

Book a stay in this charming, airy house only a five-minute drive from the island’s capital, Chora, and a five-minute walk from Loutra’s centre. Ideal for holiday relaxation with its panoramic views of the Aegean, the house can accommodate up to four people.

Open In Google Maps
840 06, Greece
Give us feedback 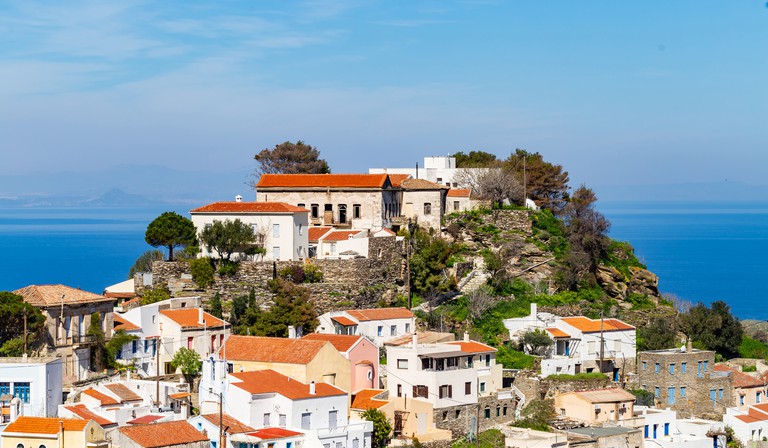 A Cycladic island close to the mainland, Kea, or Tzia, has a particular architecture distinct from the rest of the island group. Popular with Athenians during the summer and all year-round, Kea boasts a rich history, quiet beaches and quaint seaside villages. Visit the Lion of Kea, an ancient sculpture dating from around 600 BCE, still in remarkable condition. Ancient Karthea is a notable archeological site to visit, featuring the ruins of a temple and theatre. Kea is also home to beautiful beaches, where you can enjoy some water fun.

On the east side of the island in Ellinika, book a unique stay at this rural farmhouse, ideally suited for four guests. This is the perfect place for walkers, as it sits on an ancient footpath that leads to the Temple of Karthaia. 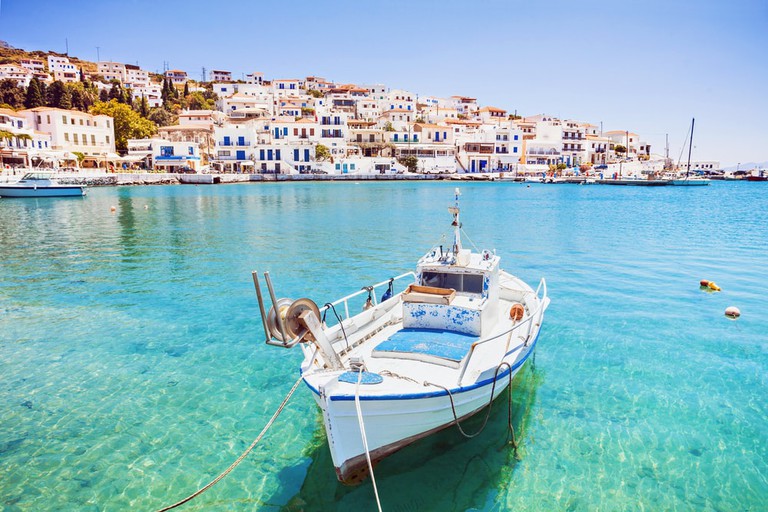 A verdant island in the far north of the Cyclades group, Andros is perfect for hiking enthusiasts, water-sport aficionados and art lovers. Featuring a museum of contemporary art, as well as an archaeological museum and a museum focusing on the olive tree, Andros also boasts remarkable beaches, such as Agios Petros, Ormos, Batsi, Korthi or the iconic beach of Tis Grias To Pidima. A visit to the Byzantine monastery offers a panoramic view over the deep, blue sea.

If you’re looking for romantic surroundings, 10 minutes from Batsi is Capensia Lodge, offering the perfect stay for two people. With an uninhibited view of the Aegean, the lodge also offers private access to Kousti Beach.

Open In Google Maps
Andros, 845 00, Greece
Give us feedback