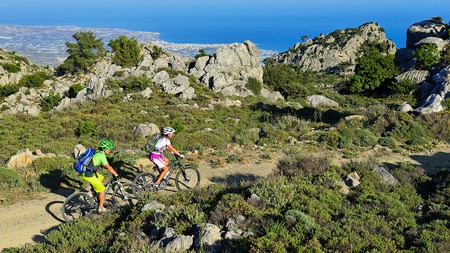 Year-round sun and pristine beaches are the usual reasons we all flock to Greece. But with new museums, restaurants, hotels and even seaplanes on offer, there’s so much more to discover. Here we reveal all that Greece has in store.

The National Gallery in Athens has reopened

In March 2021, the country marked the bicentenary of the Greek Revolution with a series of nationwide festivities and events. Part of the celebrations included the official reopening of the National Art Gallery in Athens, which shut in 2013. Among those who attended the opening ceremony were the Prince of Wales and the Duchess of Cornwall. 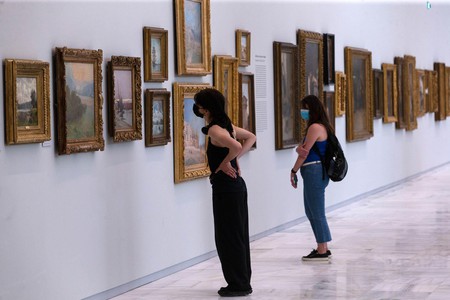 Founded in 1900, the National Gallery-Alexandros Soutsos Museum has undergone dramatic expansion to host a collection focusing on Greek and European art from the 14th to the 20th centuries; it now houses more than 15,000 artefacts and more than 20,000 works by Greek and international artists, including Nikolaos Gyzis, Yannis Tsarouhis, Rodin and Picasso. There’s also a 350-seat amphitheatre, along with workshop areas, that are due to host a variety of events in 2022.

More archaeological museums and cultural spaces are being introduced

Archaeological excavations and historic discoveries happen all the time in Greece, so it comes as no surprise that new museums and cultural spaces are now opening up to house these latest findings. Crete is about to welcome a new archaeological museum in the city of Chania, which will host more than 3,500 artefacts, including 1,000 that were previously unseen by the public. Meanwhile, the old hammam in the city, built in the 17th century during the Ottoman occupation, has been turned into an art gallery and exhibition space. 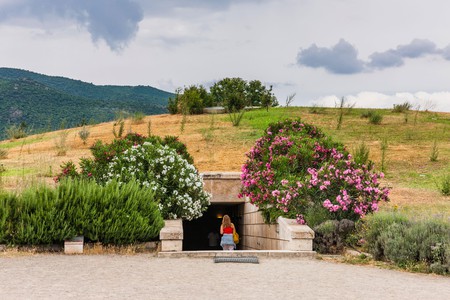 A new archaeological park featuring 530 ancient burial tombs opened in summer 2021 at the archaeological site of Aigai, in northern Greece. Aigai is already a Unesco-protected site, thanks to the tombs and treasures of Philip II of Macedon found in the area.

The restored 16th-century church Agios Dimitrios Palatitsion has reopened to the public, while a new museum, the Polycentric Museum of Aigai, will soon open its doors. Using tools such as virtual reality, the museum aims to merge its exhibits with the site into one holistic cultural experience.

Also, the burial site of the Ambracia Western Necropolis in the city of Arta in northern Greece has reopened to the public after extensive restoration works.

The country will be easier to explore by bike

Greece has been granted permission by the European Cyclists’ Federation, which manages the EuroVelo cycling network, to establish a National EuroVelo Coordination Centre. This means more cycling routes will be developed nationwide, especially in regions of great historic importance and natural beauty, where biking could help acquaint visitors with all the beautiful towns and local traditions; one of these regions is western Macedonia. This would, in turn, contribute to the development of small villages and towns that are still largely unknown by tourists, yet deserve to be explored. 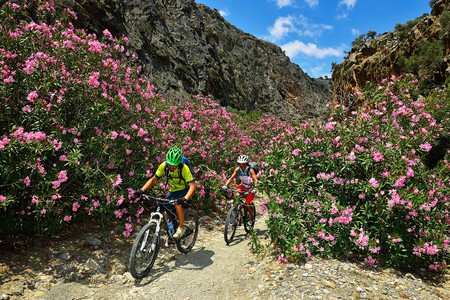 Greece aims to be a role model for sustainable tourism

With more and more countries focusing on sustainable travel, Greece has started taking steps towards a greener mindset, through a number of projects. The Mediterranean: a model sea by 2030 initiative aims to protect biodiversity and reduce overfishing and marine pollution, while there are plans to make islands such as Santorini and Mykonos entirely ecofriendly. The island of Astypalaia is already working towards becoming the first carbon-free tourist destination, by proposing a groundbreaking mobility system where electric vehicles and renewable energy sources will be the norm. 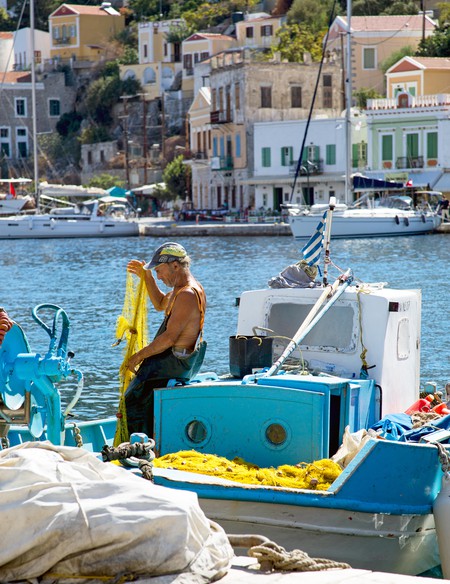 Meanwhile, Athens has re-examined its traffic limitations, allowing only cars with licence plates ending in an odd number to enter the city centre on odd days of the month, and those with even numbers to do so on even days. This measure was on hold during the pandemic but has now been reintroduced. A complete overhaul of the public transport system is also expected, to reduce pollution and traffic in the Greek capital.

The first seaplane flights in Greece take off in summer 2022

Ever wondered what it would be like to travel to a Greek island by seaplane? In 2022, you’ll be able to find out, by taking a seaplane to Tinos or Patmos, and later to Skopelos, Alonissos and Skyros. Hellenic Seaplanes, the company behind the project, wants to help expand the transport services that are now on offer, by introducing more options and launching a new era in air travel. 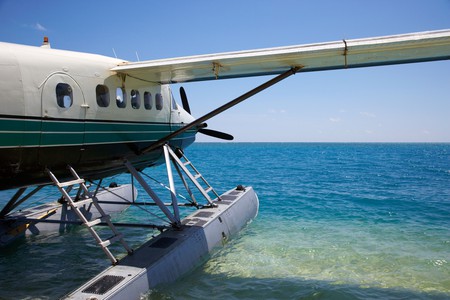 In 2022, you can reach some of the Greek islands by seaplane | © Radharc Images / Alamy Stock Photo

If you’re travelling to Greece from the UK, you’ll be spoilt for choice when it comes to available travel routes. Companies including Sunvil and Planet Holidays are heading to islands such as Lesvos, Skyros, Koufonisia andKos in their summer 2022 programme, while Seafarer Holidays will reintroduce its Saronic Gulf and Corinth Canal flotilla. Sunvil already offers rail trips from St Pancras to certain Ionian islands such as Corfu via the Alps and Milan, and Jet2.com will launch flights from the UK to Athens from April 2022. 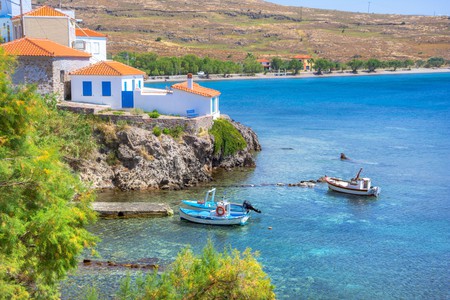 The Greek capital is brimming with new restaurants and hotels

Drinking coffee and dining with friends are two of the things the Greek people love the most, which explains why there are so many cafes and restaurants around the country – especially in Athens. The capital has long been a gastronomic destination and, over the last couple of years, even during the pandemic, it has welcomed new additions, with old classics retaining their loyal fanbase. Two new entries worth checking out are Gastone, popular for its delicious meat dishes such as flat-iron steak or steak tartare, and Dopios, focusing on local flavours with a modern twist, both in the centre of Athens. 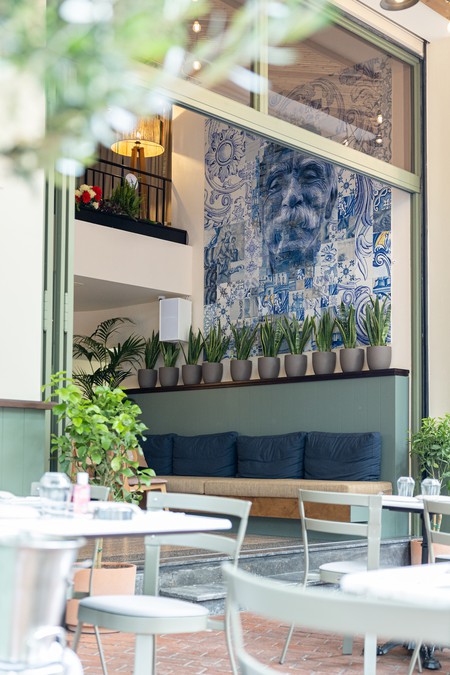 Dopios, in the centre of Athens, focuses on local flavours with a modern twist | Courtesty of Dopios Restaurant

What’s really remarkable, though, is how the city is coming into its own as a hotel destination, too. There are so many characterful hotels and lavish chains constantly popping up, that you will find it very hard to pick just one. From hip boutiques like Sir Athens and foodie retreats such as Ergon House to luxury hotels such as Electra Palace, Athens is a hotel paradise, and it aims to keep it that way well into 2022 and beyond.

But it’s not just Athens; new hotels are opening all over Greece, with many more expected to launch in 2022. Examples include the Sea Breeze Luxury Resort Santorini, Curio Collection by Hilton (the first Hilton on Santorini), due to open in spring 2022, and Cosme Hotel, part of the Kanava Hotels & Resorts, due to open on the island of Paros in May 2022.

Until then, we’ve scoured the country for great places to stay, and here’s what we’ve found – read on to discover some of the Greek hotels we love at prices you love, and book your stay right here, via Culture Trip.

Where to stay in Athens: Ergon House 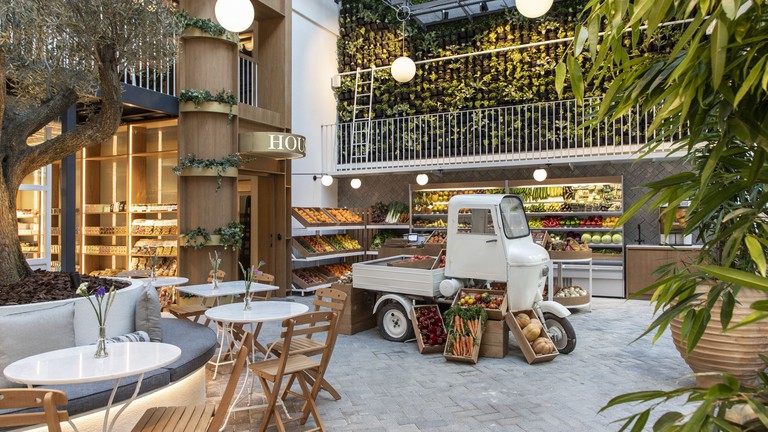 ERGON House, in Athens, has been dubbed the world's first foodie hotel | Courtesy of ERGON House / Expedia
The best place to enjoy Greek flavours paired with a luxury stay is Ergon House, in the centre of Athens. This culinary-themed hotel houses a deli selling produce from local farmers, an onsite butcher’s, fishmonger’s and bakery, as well as 38 elegant rooms echoing the gentle colours and tranquility of the Greek islands in the ‘60s. Cooking lessons with distinguished chefs are also available here, while there’s a rooftop terrace offering mouthwatering cocktails and unbeatable views of the city.

Where to stay in Crete: Domes Zeen Chania, A Luxury Collection Resort 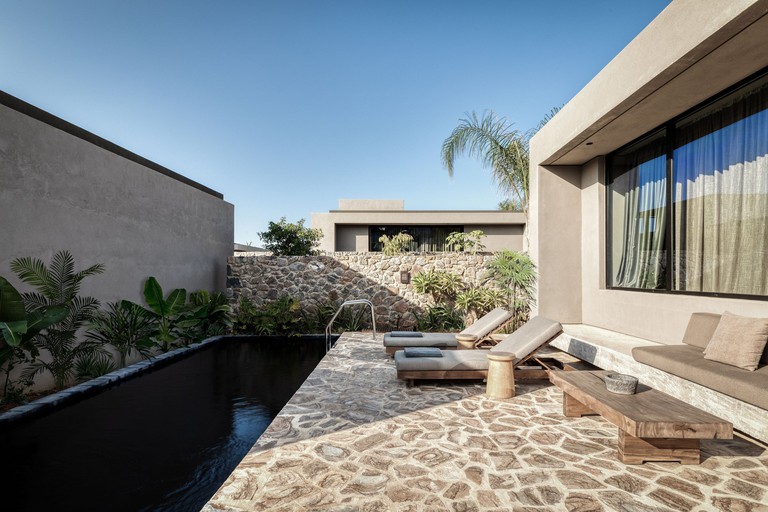 Domes Zeen Chania, A Luxury Collection Resort | Courtesy of Domes Zeen Chania
Sleek interiors in walnut-and-grey hues make up the rustic-chic oasis of Domes Zeen Chania, Crete, where the only thing you’ll worry about is whether you should take a dip in the sea, the outdoor infinity pool or your private mini-pool. The stone details and rattan furniture on the patios and private verandas complete the idyllic setting, as do the spa and the Beach House restaurant overlooking the Aegean – the latter serves fresh Cretan food. Don’t miss the chance to work out at the gym, surrounded by nature.

Where to stay in Santorini: Omma Santorini 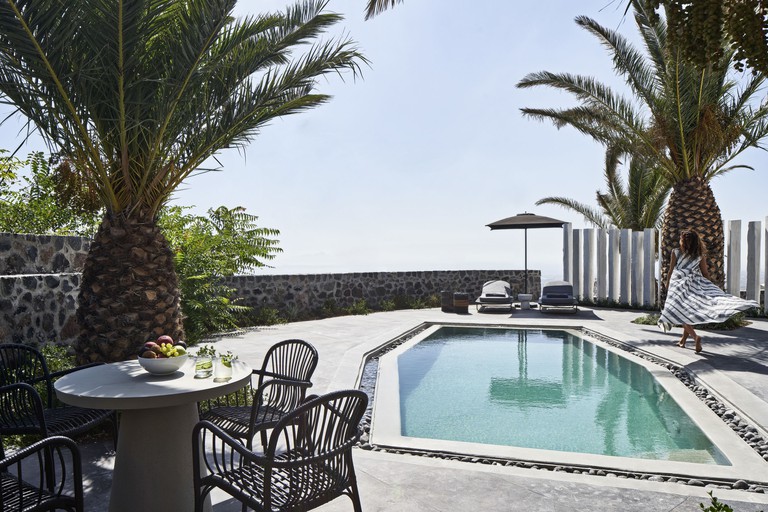 Omma Santorini | Courtesy of Omma Santorini / Expedia
The whitewashed exterior of Omma Santorini sets the minimalist tone in this lovely retreat that feels unpretentious yet refined. Two infinity pools promise to bring you closer to the caldera rim and the deep blue waters of Santorini, as you soak up the sun from your comfy lounger. Pass by the Omma Restaurant for Greek delicacies such as fresh squid and lamb, and the Omma Spa for a soothing hot stone massage – these volcanic, smooth-cut stones are bathed in body oil, releasing any trapped energy within the muscles. The Castle of Oia lies a 15-minute drive away.

Where to stay in Paros: Calme Boutique Hotel 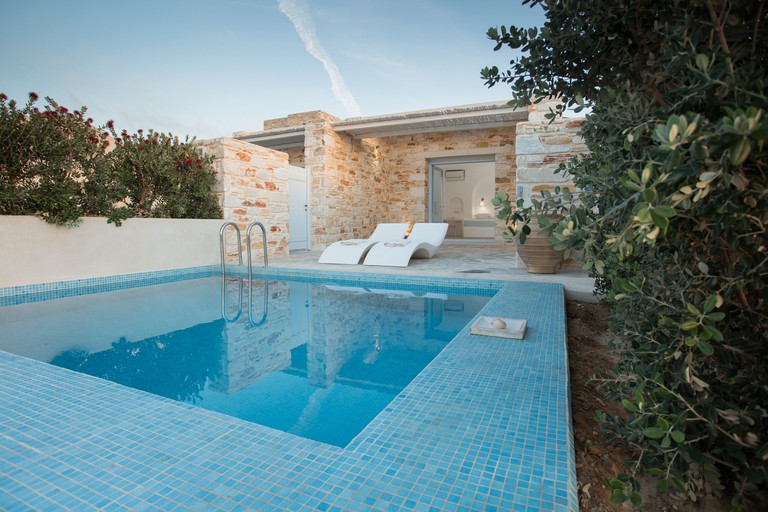 Calme Boutique Hotel | Courtesy of Calme Boutique Hotel / Expedia
Few places truly embrace the laid-back ambience of Greek island life, and Calme Boutique on Paros is one of them. The Cycladic architecture and clean decor meet the blue of the Aegean, while the private swimming pools and designer loungers add a modern touch to the traditional stone setting. Sitting near the quiet village of Drios, Calme is ideal for a honeymoon trip, guaranteeing a relaxing, loved-up stay. If you decide to mingle with the crowds instead, the famous Golden Beach nearby will not disappoint.

Where to stay in Astypalaia: Pylaia Boutique Hotel & Spa 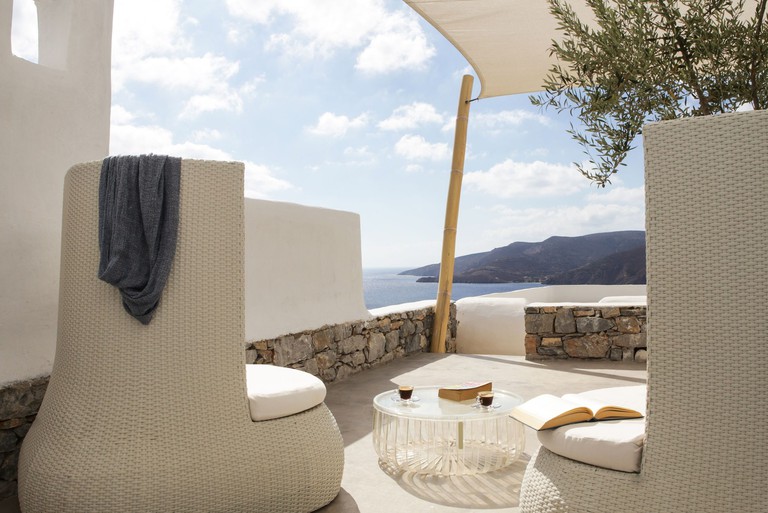 Pylaia Boutique Hotel & Spa | Courtesy of Pylaia Boutique Hotel & Spa / Expedia
One more island gem, Pylaia Boutique comes with rooms straddling different levels, where you can hop out of bed straight into your private pool or enjoy freshly baked goods out of a wood-fired oven – make sure to taste the local yellow flatbreads or the peinirli (pizzas filled with cheese and bacon), best enjoyed at the balcony gazing at the vast sea. Pay a visit to the wine cellar and take a sip of dry white Assyrtiko wine, before indulging in a body treatment with shells and cinnamon at the spa.

Where to stay in Skyros: Ammos Hotel 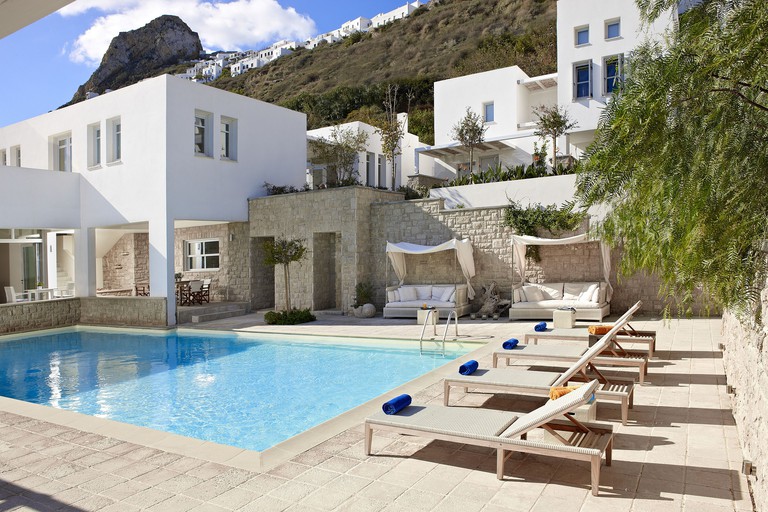 Ammos Hotel | Courtesy of Ammos Hotel / Expedia
A bit further from Skyros town, in the area of Magazia, you’ll find the unassuming Ammos Hotel. You’ll be sure to get a good night’s sleep here, either in the cream-coloured rooms with the traditional furnishings or the deluxe suites with the modern decor and stylish bathrooms. Try succulent local deserts at the restaurant or make a splash in the outdoor saltwater pool that gets all lit up at night. Alternatively, practise some yoga poses against the backdrop of smooth, light-blue waters.
Give us feedback