Why Greek Orthodox Christians Crawl Up a Hill on 15 August 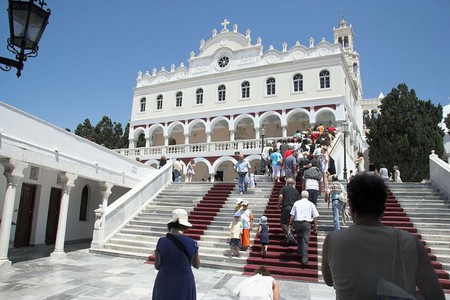 Inside area of pilgrimage basilica, Chora of Tinos | © Wiki/Commons

15 August is a national holiday in Greece and sees a mass departure from the cities to the islands and holiday homes in the mainland. However one island in particular witnesses more activity than most. Culture Trip explores why Tinos is a major religious destination.

Tinos is a Cycladic island situated next to Mykonos. The contrast between the two islands couldn’t be more different. Whereas Mykonos is famously home to hedonism and decadent living, gentle Tinos has a distinctly religious heritage.

Across Tinos are churches and shrines, the most famous of which is Panagia Evangelistria, the most holy church in Greece which houses the ‘Miraculous Icon of Virgin Mary’. In the Greek Orthodox religion, the Icon is considered to be the protector of all of Greece. 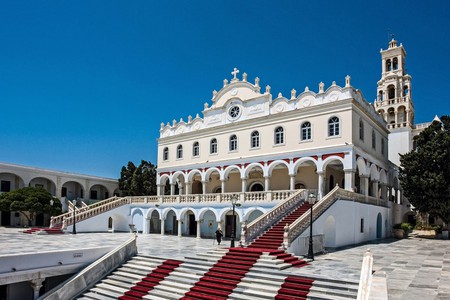 The church of Panagia Megalochari in Tinos | © Good Free Photos

Each year the island welcomes thousands of pilgrims from across Greece and neighbouring countries for the feast of the Virgin Mary on 15 August. In the Orthodox Church the 15th is ‘Virgin Mary Assumption Day’ where the Virgin is believed to have ascended to heaven. In Tinos the celebration of the event transforms the entire island.

The ritual of travelling to pay homage to such a sacred Icon at this time is highly emotional for Pilgrims, with the Holy Icon in Tinos serving as a main passage between the Virgin and the believers who seek comfort and miracles on their trip.

The journey to Tinos is one that Pilgrims have been enacting for centuries. The icon itself was discovered on the island in 1823. The discovery was the result of a series of visions had by a nun who lived on the island. Reportedly the Virgin Mary visited Sister Peraghia and told her where the Holy Icon was. Coming at a time when Greece was still under Ottoman occupation many saw the visions of Sister Peraghia and the consequent discovery of the Icon as truly miraculous. Interestingly some of the first visitors to the Icon and the Church when it was built were revolutionary fighters in the Greek War of Independence.

One of the most striking parts of the day is the level of devotion that pilgrims show to the Virgin Mary. Often pilgrims crawl to the church from the boats that they arrive on on their hands and knees to show their devotion and pray for compassion, good health and healing. The final part of the pilgrimage often happens in the blazing heat which makes the effort even more momentous.

The atmosphere at and around the Church in the days proceeding the event is sincere and intense. Other pilgrims will arrive at Tinos the night before and sleep in front of the Church to ensure they have the opportunity to see and pray to the Holy Icon.

On the day itself the Holy Icon is carried through the streets of Tinos by members of the Greek army and navy, followed by the Greek Orthodox priests, political figures and the public. The procession leads down to the port when the Icon is stationed on a marble podium and speeches are made. The desire of members of the public to touch the icon often leads to a frenetic atmosphere as pilgrims try to touch the Icon itself. After the procession and speeches the Holy Icon is returned to the Church.

So if you’re planning a visit to Tinos this summer, why not choose to witness, and perhaps participate, in one of the most significant rituals in Greece.