What Are The Origins Of The Beloved Moussaka? 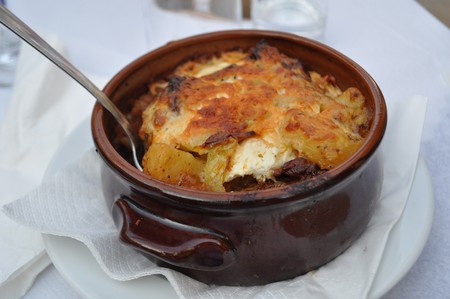 A staple of Greek cuisine, you could argue that there’s nothing better than a real homemade moussaka. But is this dish originally from Greece, or has the Greek diaspora proliferated the association?

Moussaka is a baked meat and eggplant casserole covered with a thick layer of béchamel sauce that turns crispy and golden. There are various versions of it, some which employ the use of other vegetables, such as zucchini or potatoes. Nowadays, moussaka is probably the best known of all Greek foods, next to gyros and souvlaki; however, it is also present in the Balkans and Turkey, but their version is not layered and includes minced beef. The million-dollar question is, where did it originate?

No one knows what the exact origins of moussaka are, although it is widely believed that the Arabs introduced the dish when they brought the eggplant into the area. Research points to a medieval Arabic cookbook, A Baghdad Cookery Book, in which a food historian found a recipe of the ancestor of moussaka, related to the musakhkhan, a variant from the Levant. Here is an excerpt of the recipe, as found in an article on the same subject, written by Clifford A. Wright:

In more recent years, though, Turabi Efendi published the Turkish Cookery Book in 1862, where the first recipe of moussaka can be found.

In 1920, under Ottoman occupation, Nikos Tselementes, a Constantinople-born and France-educated Greek chef from Sifnos who is known for the modernization of Greek cuisine, decided to ‘cleanse’ Greek cuisine from any Turkish influence. With moussaka, he added French béchamel sauce in an attempt to Europeanize the dish.

So the moussaka we know today is a modernized, European version of a dish of Arabic origin, introduced to Greece via Turkey. Who knew? Think about that the next time you have a bite of this flavorful meal.

All this Greek food we're eating is reminding me that I need to make this eggplant moussaka with chickpea bechamel again (and those crispy parmesan edges 😋) * Recipe is in blog archives!