Tsiknopempti: How to Celebrate Barbecue Thursday in Greece 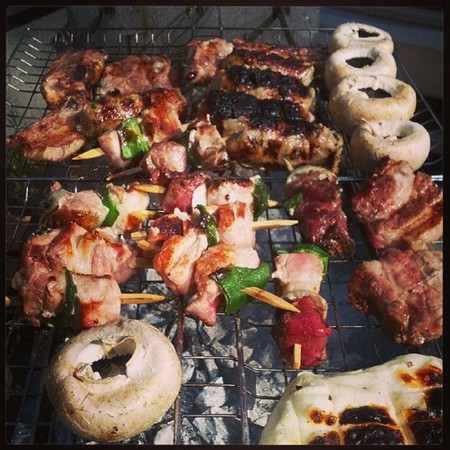 Celebrated 11 days before Clean Monday (or Ash Monday) in the Greek Orthodox calendar, tsiknopempti (Τσικνοπέμπτη, also known as Charred Thursday, or Barbecue Thursday), is a day where Greeks eat meat before entering the Lent season. Here is how to celebrate this unique day in Greece.

Marking the start of the last weekend of Carnival, before the fasting season of Lent leading up to Easter, tsiknopempti is a special day celebrated throughout the nation where Greeks grill and enjoy their favourite meat dishes before entering the fasting period, where certain foods considered luxuries are forbidden. Tsiknopempti comes from tsikna, which refers to the smell of cooked or roasted meat, and pempti, Thursday (or the fifth day of the week starting from Sunday). Though the origin of this tradition remains obscure, it’s safe to say that it is connected to Ancient Greece’s Bacchic celebrations. Thursday was chosen by the Greek Orthodox church as traditionally, Wednesday and Friday are considered days of fasting.

How to celebrate tsiknopempti

Today, tsiknopempti is a day where families and friends get together, catch up and celebrate while eating copious amounts of meat, whether at home or outside. Virtually every restaurant, cafe and taverna, even the most unassuming ones, in the country serve a special menu where meat is the honourable guest. The most popular item is probably souvlaki (skewered meat), but it’s not rare to see traditional sausages, steaks, chops, bacon or any other meat specialties, as well as the occasional meat stew on the menu. Some regions even have their own tsiknopempti traditions, such as in Serres, where men jump over barbecue flames when the meat is done or in Corfu, where locals gather around in squares and gossip.

If you happen to find yourself in Greece during this magical time, you should not be surprised if you see barbecue grills set up in the streets in front of tavernas, kafeneia and restaurants. If you plan on joining the fun, it is highly advised that you book a table somewhere (obviously not in a fish taverna), since they will be crowded as many families and groups of friends take the opportunity to dine out and not worry about cooking. You can also opt to dine in a steakhouse and in any restaurant specializing in quality meat, where you will be able to decide on the cut of meat, the breed of cattle and maybe, most importantly, how you would like your meat to be cooked.

Even if you are not Greek Orthodox, you are more than welcome to take part in the celebration and won’t be excluded. However, if you are vegan or vegetarian, it might be best to stay away. But don’t worry, Lent is undeniably the best period for you in Greece as restaurants and tavernas launch special Lent menus during the entire period (even McDonald’s!).

Throughout the world, similar celebrations resembling tsiknopempti are held before Lent, though for many, the equivalent festival is Mardi Gras or Fat Tuesday.