Top Reasons Why You Should Visit Tinos, Greece 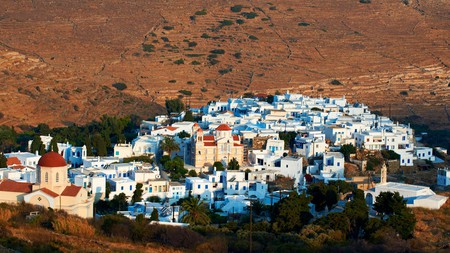 Compared to the tourist hotspots of Mykonos and Rhodes, the island of Tinos remains a largely undiscovered gem. Yet this little Cycladic jewel has so much to offer anyone looking for an authentic Greek holiday away from the crowds.

Despite being so close to Mykonos – around 10km (6mi) at its closest point – Tinos is a world away from the notorious party island. It’s far less developed than many of its neighbouring Greek islands, and herein lies its appeal. From scenic villages and quiet, pristine beaches to cultural events and mouthwatering delicacies, Tinos is sure to amaze you with its unassuming beauty and unique traditions. Here are Culture Trip’s top reasons why you should make Tinos your go-to sanctuary this year. 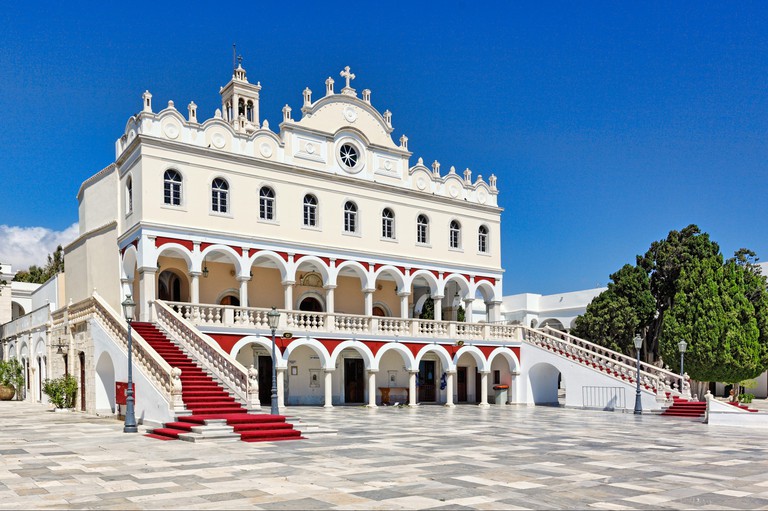 © Constantinos Iliopoulos / Alamy Stock Photo
Locals and travellers gather in Tinos every summer to get a closer look at the miraculous icon of Virgin Mary, and pray at the sumptuous church that houses it. On 15 August, when Greece celebrates the Assumption of the Holy Virgin, pilgrims arrive here on their knees, literally crawling along the red-carpet pathways leading up to the church. It is said that the Virgin Mary fulfills whichever wish you make before her eyes, so the arduous crawl – which can take up to an hour – could be worth it.

Marvel at the beautiful pigeon houses 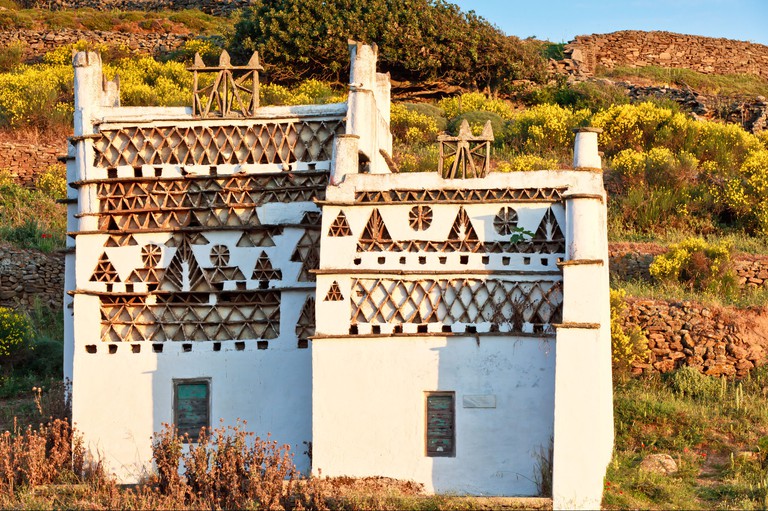 © Kim Petersen / Alamy Stock Photo
Scattered around Tinos are more than 600 whitewashed pigeon houses. These are believed to date back to the 13th century when noble Venetians began breeding and exporting pigeons. Tinian craftsmen have since used these peculiar, two-storey houses as blank canvases, adorning them with elaborate geometric symbols and turning them into fine pieces of folk art. Right next to the village of Tarabados, you will come across a valley with so many of them that it’d be hard to resist a no-filter Instagram post.

The rocky, barren soil of Tinos has provided inspiration to all kinds of artists, from painters to sculptors. Most of the exquisite sculptures that currently grace the island are made with Tinos’ world-famous white and green marble. Make sure to visit the home of Greek sculptor Yannoulis Chalepas, now turned into a museum, and marvel at his 1878 Sleeping Beauty sculpture – a young girl sleeping, symbolising death. This is a copy of the original which is in the First Cemetery of Athens.

Stroll around the one-of-a-kind villages 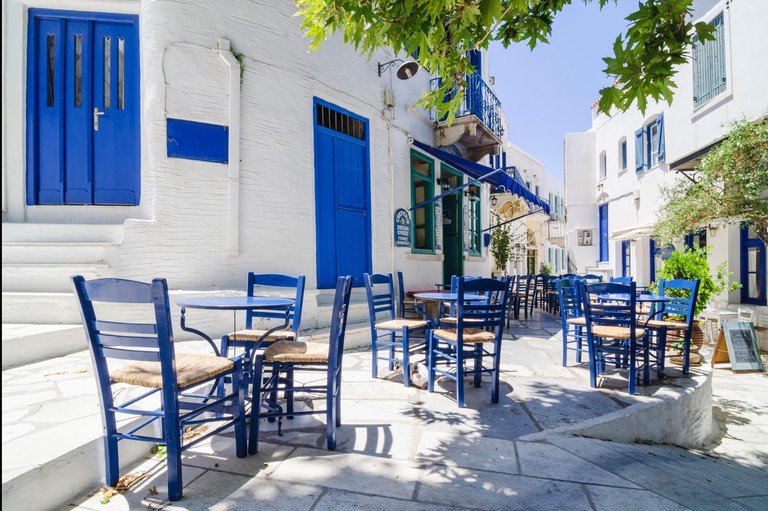 © AegeanPhoto / Alamy Stock Photo
While the capital is where most of Tinos’ restaurants and bars are, it’s the picturesque villages that will win you over. The birthplace of Chalepas, Pyrgos stands out for the abundance of marble, present in every corner – even benches and bus stops are made of marble – and for the charming square where you can taste a delicious galaktoboureko dessert at a local cafe. In Volax, a series of otherworldly granite boulders give way to cute houses whose doors are decorated with lyrics of romantic poems.

Sunbathe on the multitude of pristine beaches 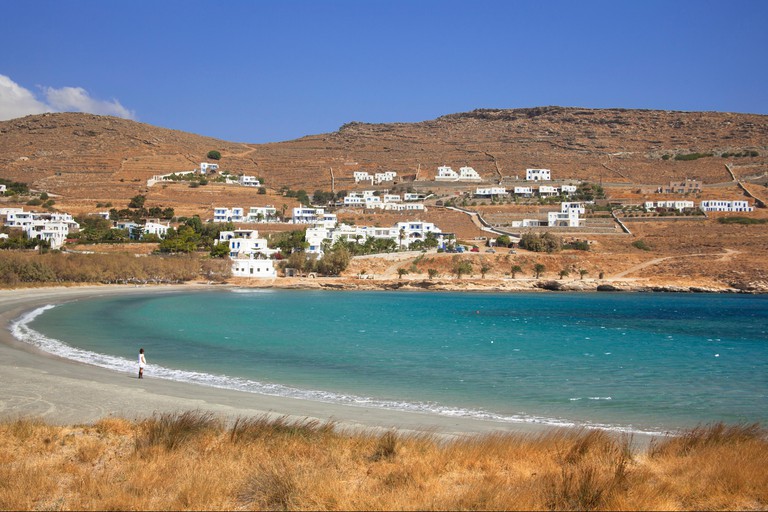 © robertharding / Alamy Stock Photo
As a typical Cycladic island floating in the vast Aegean Sea, Tinos boasts white sand beaches and cerulean waters. In fact, there are so many good beaches – each marvellous in its own right – that you’ll be spoilt for choice. From Agios Ioannis’ crystalline waters and plush amenities – the bar is fully equipped with snacks, and massages are on offer – to Agios Romanos’s cool waters or Kolymbithra’s rocky landscape and wild waves, Tinos is a beachgoer’s paradise.

Windsurf on its windy shores

Tinos is known for the very strong winds which are especially prevalent during the summer. Trying to sunbathe without getting covered in sand is certainly no easy feat, but you can at least make the most of big, spectacular waves. Beaches such as Kolymbithra or Livada are particularly popular among surfers, while others like Agios Fokas or Kionia are ideal for windsurfing. The island has a coastline of 114km (71mi), so you are bound to find your dream spot and catch that perfect wave.

Dance at a local festival

Tinos hosts a range of festivals, mostly during the summer. Tinos Festival, which includes music concerts, theatrical performances and book fairs, is probably the most well-known, but the Revival of the Trawl has to be the most exciting. To honour the old fishermen in the village of Ktikados – one of the very first fish villages of Tinos – people gather at Kionia beach towards the end of August and fish. Afterwards, they feast on seafood and sip on wine, as folk groups dance and play traditional music.

No die-hard foodie will stay unimpressed by Tinos’ culinary delights. The island’s farmer’s markets sell some of the most succulent fresh produce – pass by the one at Pallada and you will find anything from luscious tomatoes to capers and artichokes. Meanwhile, the many quaint taverns on Tinos’ hillside villages serve delectable traditional dishes, some with a gourmet touch. One of the most idyllic is the elegant Exo Meria, guaranteeing unparalleled sea views from its lovely terrace. Don’t miss their oven-baked omelettes.

To explore more of Greece, check out the best hotels in Astypalea, and the best hotels in Zakynthos, all bookable with Culture Trip. During your stay, explore the best things to do in Oia, and relax on the best beaches in Santorini. Make sure you also book a table in at least one of the best restaurants in Oia to sample some delicious Greek dishes.