The Top Things to See and Do on Kos Island, Greece 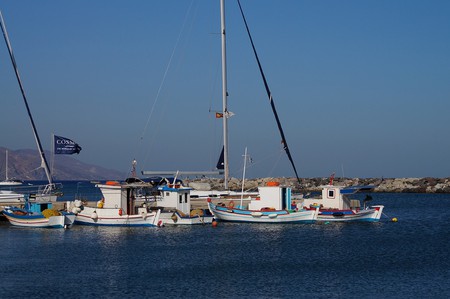 Kos, one of the Dodecanese islands, is known for its sandy beaches, rich Greek and Roman monuments and for being the birthplace of Hippocrates. Discover the best things to do on this Greek island.

If you’re looking for a mixture of ancient ruins and vibrant nightlife, then Kos is the place for your next Greek island holiday. Stroll through centuries-old ruins dating back to the 4th century BCE, before hopping on a boat to nearby Plati or sipping cocktails in the lively bars of Kos town. We’ve collated a rundown of the best attractions on the island.

Explore the origins of medicine at Asclepeion 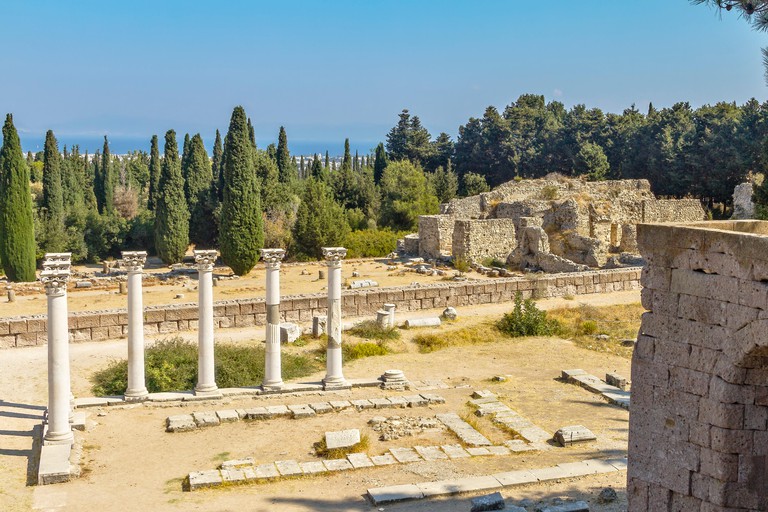 A religious sanctuary devoted to Asclepius, the god of healing, it was built in the 4th century BCE after a school of medicine, according to legend, had been founded by Hippocrates himself, the Kos-born “father” of modern medicine. The ancient site stands on a pine-covered hill 3km (2mi) southwest of Kos town, commanding wonderful views across towards Turkey. A bus runs hourly from Kos town, or hire a bike for a pleasant uphill ride.

Kos is an island of endless ancient treasures, from millennia-old Corinthian columns to the mighty medieval castle watching over the harbour. Head to Kos town for ancient ruins aplenty. The western excavation area, for example, is an open archaeological site holding ancient ruins and mosaics uncovered by an earthquake in 1933. The remains of ancient Agora, a town dating back to the 4th century BCE, were also discovered at this time.

Party the night away in Kos town

Nightlife in Kos rivals Ibiza on a smaller scale. Most of the lively bars and dance-‘til-dawn clubs are based along two streets, Diakon and Nafklirou, in Kos town. A sundowner at the atmospheric Harem beach bar is a good place to start before heading into town for shots and dancing at West Bar, a popular LED-lit club. Alternatively, stop by White Corner on Nafklirou, a glam spot with exposed brick walls, a long cocktail menu and leafy outdoor terrace. Dress to impress.

Visit a castle from the Knights Templar 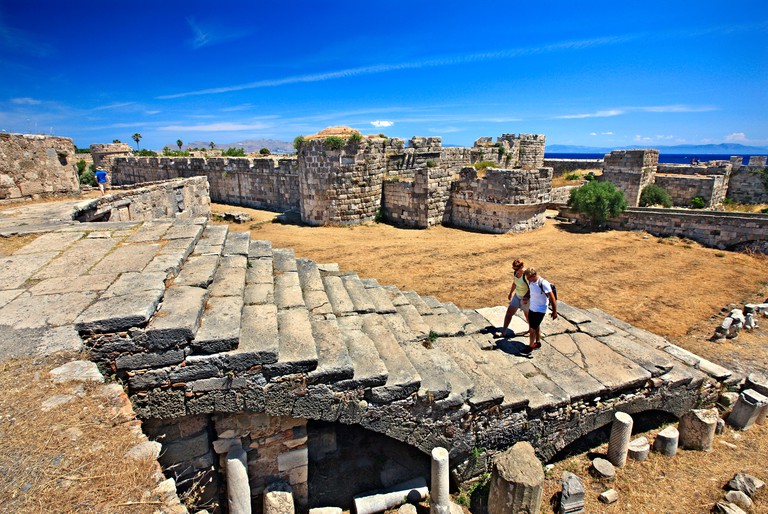 © Hercules Milas / Alamy
The fairytale-friendly Neratzia Castle was built as a fort by the Knights Templar at the end of the 14th century. The castle has an inner and outer wall (the inner is the oldest), four high towers positioned on each corner and a wide moat. The castle owes its name to the Seville orange trees – neratzia – planted all over Kos island by the knights. You are free to roam the grounds, admiring this stately relic of the island’s past. The views out to sea at sunset from its bastions are pretty special.

The sandy Agios Stefanos beach is located in a rocky region of the island, 40km (25mi) southwest of Kos town. It is flanked by beautiful blooms of flowers and lush vegetation, but the main draw is the nearby 15th-century monastery of the same name. It was seriously damaged in World War II, but the museum here holds surviving relics and frescoes. The building is perched on the very edge of a chalky cliff, and capturing it in a photo is a must.

Cycle from Psalidi to Faros Beach

For keen cyclists, Kos is heaven on two wheels. Bikers of all abilities can join locals zipping along the island’s wide variety of natural and newly built cycling trails, plus there’s a great variety of guided and self-guided tours. The route from Psalidi to Faros Beach is spectacular and at 13km (8mi) is manageable in a day. Expect to traverse dirt tracks, climb mountains and enjoy panoramic views of the island along the way. The island has plenty of rental shops.

Swim in the hot springs 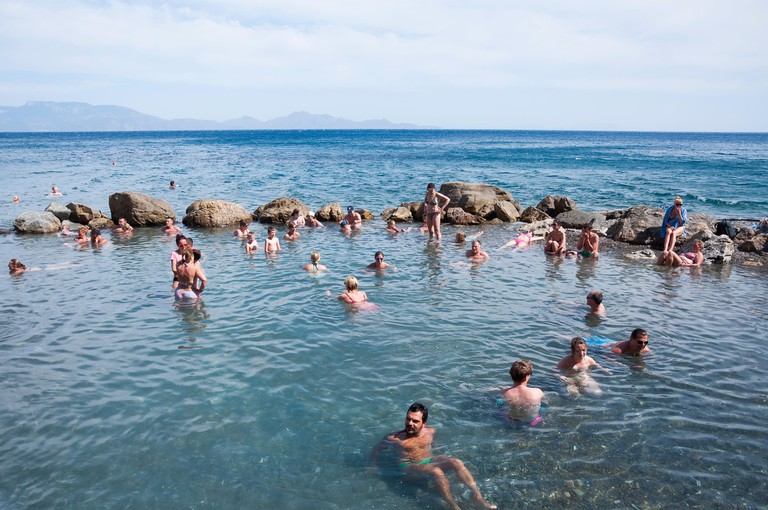 The chance for a deep soak in natural thermal springs should never be passed up. The springs in Kos are in Agios Fokas at the end of a pebble beach on the southeast side of the island. On the way, you will need to travel across Cape Agios Fokas, a steep arm of rock with a small byzantine church on top. The water temperature hovers between 42C (107F) and 45C (113F). Locals say a good entry point is towards the back where the water isn’t quite as steamy. 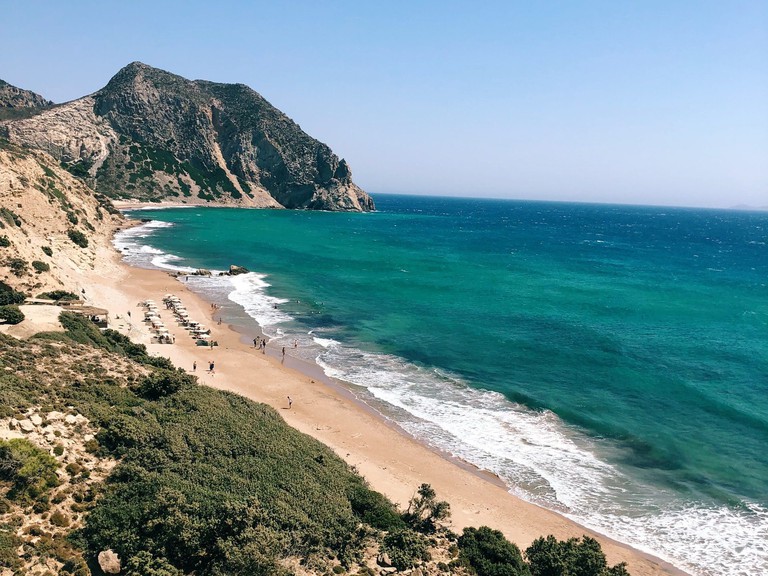 There are two paradise beaches on Kos. One is located northeast of Kefalos, with a bar and crystal-clear waters. The other is southwest of Kefalos, which also has a bar and umbrellas to rent. The latter is a little harder to get to (at the end of a winding first track) and tends to be quieter, but it is clearly signposted. Enjoy sunbathing on either of these beaches with dips in the sea and a Mythos beer or two.

Take a boat trip to Plati 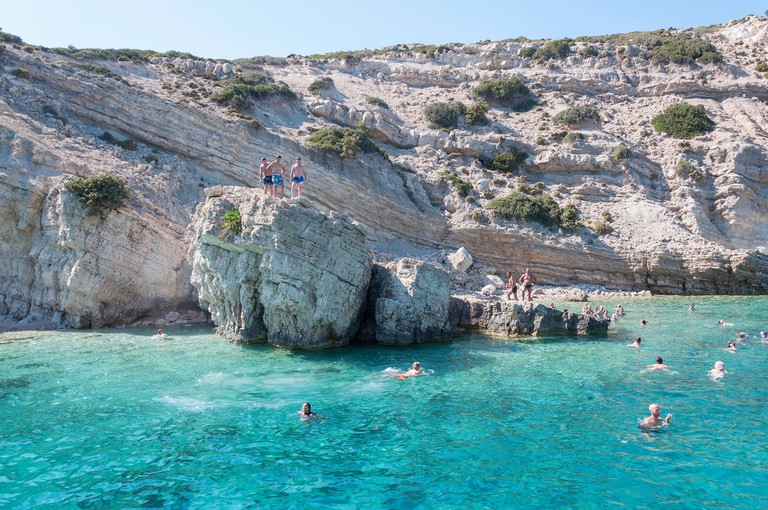 Kos has some beautiful secluded spots, only reachable by boat; the tiny island of Plati is one of them. This dot of an island has a long sandy beach with umbrellas and sunbeds, a small chapel and craggy outcrops of rock – perfect launch pads into the sea for cooling swims. It’s easy to hop on a boat across from Kos on a whim. Alternatively, book a boating tour which will take you to Plati and its neighbouring, and equally small, islands Kalymnos and Psérimos.

Sports Center
Facebook
Email
Twitter
Pinterest
Copy link
Share
There’s only one place in Kos to head for an evening strike: Ten Pin Bowling BO. This six-lane bowling alley has a bar, weekly sushi nights and pool tables. It’s the perfect place for a break from the sun or a quieter evening away from the lively nightlife on Kos. But underpinning the island’s 24/7 living, it is open from 8am until 1am, serving morning coffee through to killer cocktails.

To explore more of Greece, check out the best boutique hotels in Santorini and the best hotels in Mykonos. These are bookable with Culture Trip. During your stay, explore the best things to do in Oia, and relax on the nine best beaches near Athens. Make sure you also have a drink at one of the best restaurants in Syros to sample some delicious Greek cuisine.

This is an updated rewrite of an article by Ethel Dilouambaka.