The Top 10 Things To Do And See In Thessaloniki, Greece 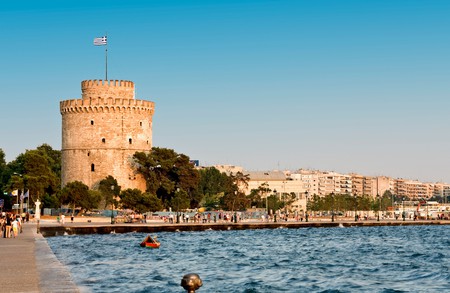 The White Tower, set on the Thessaloniki waterfront, is an emblem of Greece's second city | © PANAGIOTIS KARAPANAGIOTIS / Alamy Stock Photo

Abounding in Ancient Greek and Byzantine history, tavernas and lively nightlife, Thessaloniki is becoming a prime city-break destination. Discover the best things to see and do in Greece’s second city, from wandering the streets of Ano Poli to sampling local wine.

Whether you’re looking to go museum hopping, take in spectacular views from Thessaloniki’s fortress walls, or devour authentic souvlaki skewers, Thessaloniki – the cultural capital of northern Greece – has no shortage of activities to help you fill your itinerary.

Climb your way through history at the White Tower

The emblem of Thessaloniki, the White Tower stands on the city’s seafront and dates back to 1430. Having served as a Byzantine fort during the Ottoman period, it was originally referred to as the ‘Red Tower’ due to its infamous nature as a brutal prison, but was whitewashed around 1890 and renamed as a result. The White Tower is now a museum, and open to the public – follow the spiral steps to the top, stopping in at the various rooms adjoining the staircase, each detailing a different chapter of history. Once at the top, you can enjoy a panoramic view of the city and across the Thermaic Gulf. 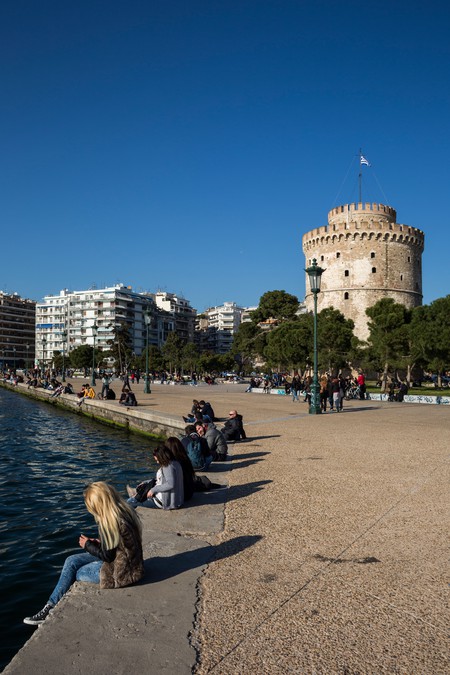 If the White Tower is the historical emblem of Thessaloniki, Thessaloniki’s modern symbol is the OTE Phone Tower. The 76m (250ft)-tall tower, set within the Thessaloniki International Exhibition Centre, first opened in 1966 but underwent renovations in 2005 to restore to life the 360-degree rotating café and restaurant, Skyline Café-Bar. While whirling on the top floor of the tower with a cup of coffee or a glass of wine, you can enjoy the city views from an array of angles. 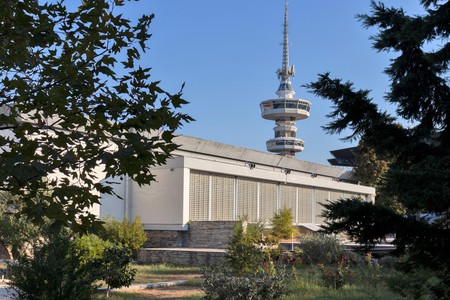 Ano Poli, or the Upper Town, is a historic neighbourhood of Thessaloniki that managed to escape the flames of the Great Fire of 1917, leaving its cobblestoned streets and Ottoman-era houses untouched. If you don’t mind the uphill walk, you can get there on foot from the city centre or hop on bus 22 or 23. Refuel at one of the excellent tavernas (small restaurants serving Greek cuisine) in the area – try Tixo Tixo or Igglis – and end your day sitting on the fortress walls while enjoying the sunset. 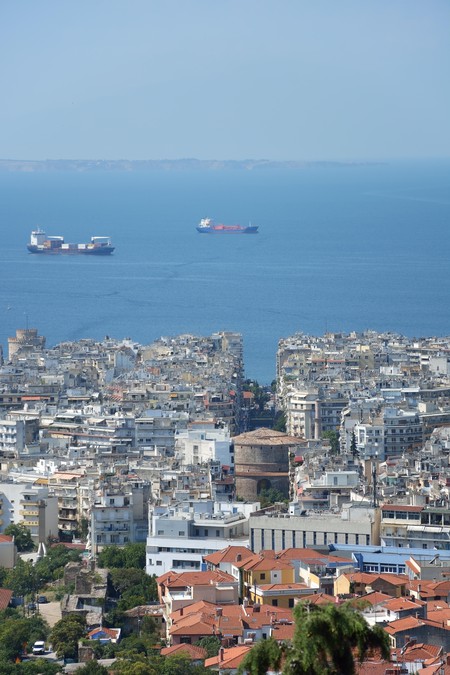 Expect panoramic views of Thessaloniki from Ano Poli, including of the historic ‘rotonda’ and the White Tower | © ATHINA PSOMA / Alamy Stock Photo

Trying street food is an essential part of travelling, offering a fast, cheap introduction to authentic local flavours. Grilled souvlaki, a chicken or pork skewer served either as a wrap, or on its own, is available at eateries throughout the whole city. Add some tzatziki (yoghurt dip with cucumber) or tirokafteri (spicy cheese dip) and you’ll be hooked. Vegetarians need not worry – opt for veggie variations with mushrooms and halloumi cheese. Pro tip: pick up your souvlaki from Laikon in the Ladadika district, which is open all day and night and is famed for using the freshest ingredients, to satisfy your fast-food cravings.

One of the few standing buildings after the great fire of 1917, Bensousan Han served as a guest house until the 1930s. It has seen many uses up until today, but is currently one of the city’s key creative hubs, hosting art exhibits, theatre performances, festivals, art classes and workshops – local Thessaloniki artist Achilleas Messaikos describes it as: “still preserving the essence of an inn”. For any art enthusiasts visiting the city, Messaikos also suggests visiting the Museum of Contemporary Art, and the Teloglion Arts Foundation.

Gain an insight into the city’s Jewish history

Unbeknownst to many, Thessaloniki possesses a rich Jewish history and to this day retains a vibrant (if small) Jewish community. Before World War II, the city’s Jewish population stood at over 50,000 – over half of the total population – with 95 percent of the community killed during the Holocaust. Today, the community numbers around 1,500 people, and visitors can explore a number of key Jewish sites. The Jewish Synagogue on Syggrou Street is the only functioning synagogue in its pre-Holocaust State, due to its use as a warehouse by the Red Cross during the war. Follow a tour of the synagogue with a visit to the Jewish Museum of Thessaloniki, located just a 10-mn walk towards the sea. Additionally, you can visit the Holocaust Memorial on Venizelou Street; the Old Railway Station (the site of Jewish deportations during the Holocaust); and the Villa Bianca, a mansion formerly owned by Jewish community member Dino Fernandez Diaz and now home to the Municipal Art Gallery. 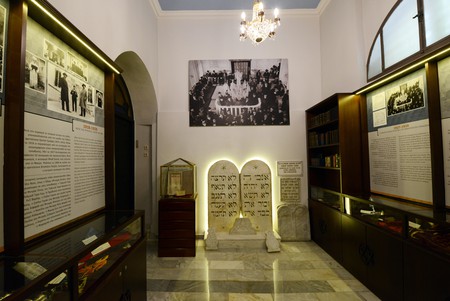 Party all night in the Valaoritou district

Thessaloniki is a nocturnal spot and home to a multitude of bars and clubs. Dispersed throughout the city are pockets of nightlife, open seven days a week late into the night or even just before the sun rises. The Valaoritou district is among the city’s most happening areas during the evening hours – beer bars, cocktail hubs and dance floors can all be found in the area, catering for every breed of partygoer. Local DJ Simeon Mavridis suggests Gorila for superb cocktails and music, as well as Ypsilon for top-notch drinks and a striking, minimalist interior.

Get a taste for local wine at the Ktima Gerovassiliou vineyard

Just a few kilometres outside of the city lies the oasis that is Ktima Gerovassiliou, a vineyard and wine museum, spanning 720 acres (291 hectares) of land. Marketing director of Ktima Gerovassiliou, Vasiliki Gerovassiliou, believes a key draw of the vineyard is the way in which culture, wine and nature all come together on the estate: “During harvest season, the vineyards are flooded with people hand picking grapes which are then made into wine,” she says. As well as producing award-winning wines, Ktima Gerovassiliou also offers daily tours and educational programmes.

Step through the doors of the Museum of Byzantine Culture to travel back in time to the Middle Ages. The museum guides visitors from early Byzantine history up until the Ottoman period in a spectacular space where contemporary architecture meets rich Byzantine culture. Among the finds on display are manuscripts, wooden icons and mosaics, offering insight into the growth and role of Christianity in Thessaloniki’s development. 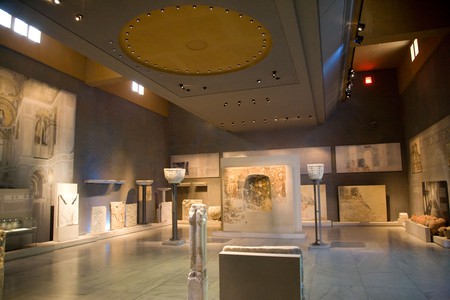 Come together for ‘tsipouro’ and ‘meze’

Make sure you have a strong stomach for this one, because tsipouro is not for the faint of heart. At 40-45% alcohol of distilled spirit you’re going to need a good amount of mezedes (small plates) to keep you grounded while drinking this traditional un-aged brandy. A trip to the tsipouradiko or ouzeri (tsipouro or ouzo tavernas) is a common outing for Greeks of all ages. In Thessaloniki, they can be found both along the waterfront as well as in the city’s more tucked-away cobblestoned streets and alleys. One of the oldest and most renowned ouzeri is Agora on Ionos Dragoumi Street. Here you can indulge in eclectic mezedes for just a couple of euros each and a pitcher of tsipouro. 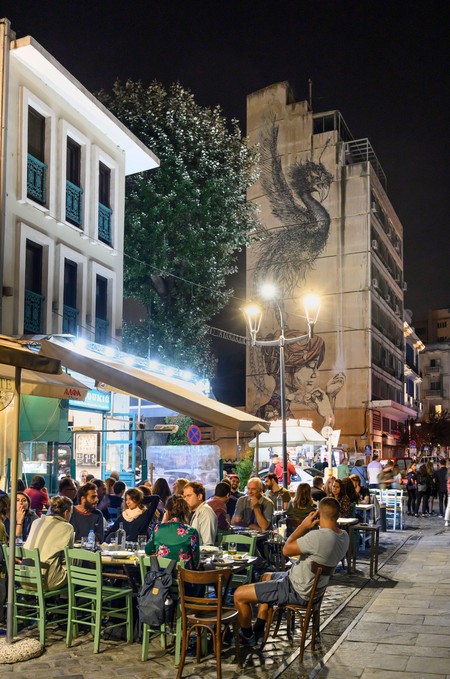 Interested to find out more about Thessaloniki? There are plenty of reasons to visit, even more so when considering the best local dining spots. You can also relax at these nearby beaches if you fancy a slower pace. Alternatively, see some historical sites in the capital and choose between hotels and boutiques hotels that are bookable through Culture Trip.
This is an updated version of an article originally written by Evangelos Tsirmpas