The Stunning Benaki Museum At A Glance 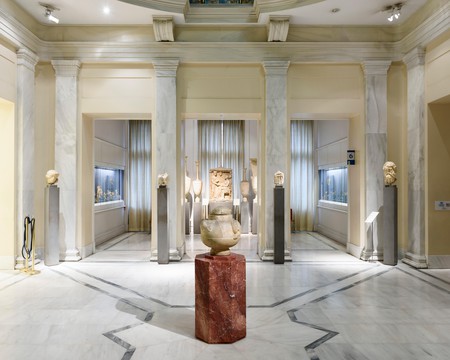 Collections of the Benaki Museum include Greek art objects from all periods, giving a fascinating insight into Greek culture through the ages | © Alastair Philip Wiper-VIEW / Alamy Stock Photo

Ranking among the top cultural institutions in Greece, the Benaki Museum in Athens is the only museum in the country with exhibits from all eras of its culture and history – with a focus on foreign influences.

The Benaki is the longest-established museum in the country that operates as a private foundation. Over the years, as the collections have grown, the building that houses them has been expanded, and the Benaki Museum now extends to other sites in Athens. We look at the growth of the institution from its inception to the present day.

The heart of the Benaki Museum is the magnificent neoclassical building on Vasilissis Sofias (Queen Sofia Avenue) in the centre of Athens, opposite the National Gardens. But the museum’s original home is part of an architectural complex that has undergone a series of additions.

The core of the building was built in 1895 and was known as the Harokopos Mansion. When the family of Emmanuel Benakis, a wealthy cotton merchant, moved in 1910 to Athens from Alexandria, Egypt, a ballroom and additional auxiliary spaces were added. In 1929, it was enlarged with the addition of another wing to transform the house into a museum.

In 1965, the exhibition areas were further enlarged by architect Emmanuel Vourekas to accommodate artefacts relating to Eleftherios Venizelos – credited as the maker of modern Greece – as well as the collection of Greek politician and avid collector Damianos Kyriazis. Then in 1968, further extension works were carried out to make room for the important donation of Eleni Stathatou.

In 1973, funded by the Stamatios Dekozis-Vouros Foundation, the construction of another wing and a small rooftop bar was implemented, again by Vourekas.

The successive additions, both at ground level and in the basement, called for the reorganisation of the whole building. A restructuring project, designed by architect Alekos Kalligas, began in 1989 and was completed in 1997. The usable space was doubled to reach a staggering 7,000 square metres, which, with the addition of two storage basements in the new wing, is distributed over five interior levels.

In 2000, the museum was reopened with great fanfare on 7 June by Konstantinos Stephanopoulos, who was then president of Greece. The Greek collections that were added include works of art from the prehistoric to modern times. Focusing only on Greece, these collections make the Benaki Museum on Vasilissis Sofias an excellent place to discover and learn more about the country.

But some of the Benaki Museum collections are located at other sites in Athens. Over the years, the museum has received donations from generous contributors and today includes: the Kouloura Mansion in the Athens seaside suburb of Palaio Faliro, which houses a children’s toys collection; the Benaki Islamic Art Museum in Kerameikos, with Islamic art and Chinese porcelain relocated from the main museum; the Nikos Hadjikyriakos-Ghikas Gallery in the centre of Athens; and Delta House in Kifissia, which accommodates the Benaki’s Historical Archives.

The Museum of Islamic Art, located in a neoclassical building in the Kerameikos district, features a collection of world-renowned artefacts, one of the top 10 of its kind in the world. It depicts the evolution of Islamic civilisation from the emergence of Islam up to the Ottoman period, and the development of Islamic art up to the 19th century with a collection of more than 8,000 works of art, including ceramics, gold, metalwork, textiles and glass, and other artefacts. Also, a section of the ancient city wall of Athens is now accessible to visitors. It was uncovered during restoration works.

The new Benaki Museum building is at 138 Pireos Street. Organised around a central courtyard, the new building covers an area of 8,200 square metres, with a 300-seat amphitheatre and a bookshop and restaurant at the ground level.

The Delta House, located in the northern suburb of Kifissia, was built at the beginning of the 20th century. Sold in 1912 by owner K Lytsikas to Emmanuel Benakis, the house was given to his daughter, author Penelope – married to Stephanos Delta – who moved into the house in 1916. She lived there for 25 years, until her suicide in 1941, as the German armies arrived in Athens. It was there that she wrote her best-known stories for younger readers such as The Secrets of the Swamp and Crazy Antonis, based on her brother’s childhood adventures. Since 1994, the Delta House has accommodated the Historical Archives.

The Kouloura House dates from the 19th century and is designed in a neo-gothic style. The building is one of few from this era that has survived in Athens. Donated by Athanasios and Vera Kouloura, it is located on Poseidonos Avenue in Palaio Faliro and is the designated home of the collection of toys and games donated to the museum by Maria Argyriadi in 1992.

The Hadjikyriakos-Ghika’s residence was donated to the Benaki Museum during the artist’s lifetime. The original structure is a typical example of an inter-war apartment block. The artist lived on the fifth floor of the building, using the unusually spacious and well-lit space on the sixth floor as a studio and library. He lived and worked there until his death in 1994. In 1991, the Nikos Hadjikyriakos-Ghika Gallery opened across an area of 150 square metres on the fourth floor of the building. Organised by the artist, the permanent exhibition gives a vivid impression of his creative output.

Whether you are interested in modern Greek history, Islamic art or want a perspective on Greek culture through the ages – or if you are looking for a fun place to take your children, nieces, or nephews – the Benaki collections include objects and artefacts to fascinate all of its visitors. Make sure to check the schedule of the site of the museum you want to visit before you go.