The Perfect Greek Island for Every Traveller This Summer 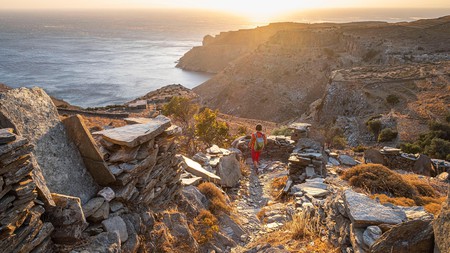 Zagora, on Andros, is the site of Early Iron Age settlement that dates back almost 3,000 years | © Hemis / Alamy Stock Photo

There are more than 200 inhabited islands in Greece, each of them offering visitors a multitude of reasons to put them high on your travel list. But how to choose which is best for you? Here’s our handy guide.

To make things easier, we’ve figured out which island best suits your needs, based on its unique traits. Whether it’s a delicious meal, a hiking adventure or a spiritual experience you’re after, discover your go-to Greek island for the summer through our curated list.

Most Greek islands boast traditional delicacies and individual recipes, with food usually being a big part of their culture. If we had to choose just one, though, it would be Crete. Thanks to a wide range of ingredients that can only be found here, the Cretans’ distinct recipes make for mouth-watering dishes. From the savoury-sweet Sfakiani pita – a pie filled with smooth anthotyro cheese and topped with honey – to the spicy cold meat apaki or the staple gamopilafo (made with pilaf, tender meat and extra butter), the options are endless. 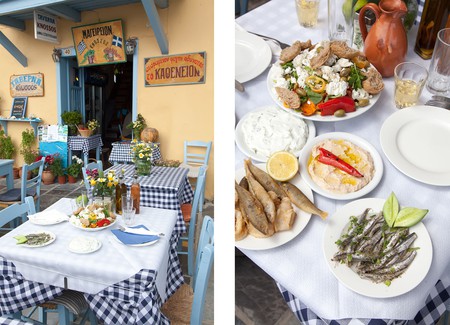 For those adrenaline junkies who would choose adventure over lying on the beach, there are several Greek islands that could do the trick. Milos has some spectacular remote beaches with caves, ideal for snorkelling and further exploration. Some of them can only be accessed by boat, which might encourage you to hop on a canoe and paddle there. For watersports, such as wakeboarding, waterskiing and paddleboarding, Zakynthos is the way to go. Keen bikers will particularly like Nisyros, Symi and Halki, which offer plenty of routes in between villages, beaches and coves. 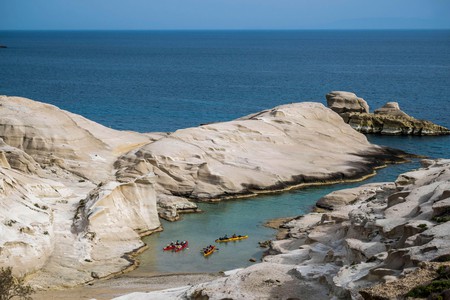 A number of Greek islands offer excellent hiking trails that are worth exploring. There’s the impressive, 18km (11mi) Samaria Gorge in Crete, or the innumerable rocky paths of Ithaca, which lead to the places that Odysseus, Ithaca’s fictional king in Homer’s epic poem Odyssey, was said to have visited. You may also appreciate the trails of Andros that pass through virgin valleys and ancient watermills. Naxos also offers an amazing hiking experience, in Tragaea, a vast valley of olive groves with trails that lead you to charming villages. 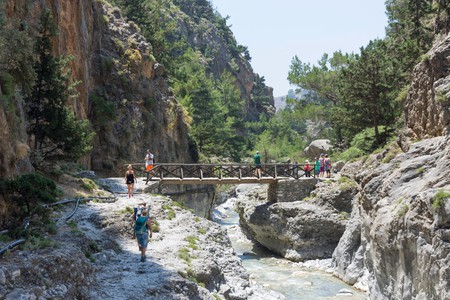 When it comes to beaches, it would be unfair to pick just one island, since most of them have so many great options. The Ionian and Aegean seas are quintessentially Mediterranean: warm and blue. Tinos is a lesser-known spot that will tick any beach-lover’s box. For the more exotic, try Paxi, where the water shimmers bright turquoise, or the black-sand volcanic beaches of Milos, such as Fyriplaka, or Kleftiko beach, which is surrounded by volcanic white rocks. 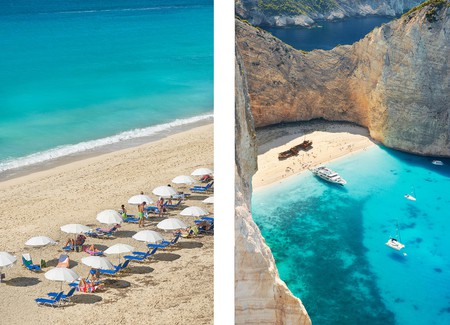 The island group of Sporades includes some of the greenest in the Aegean Sea. If you love the natural world, you’ll be mesmerised by Alonissos and its unspoilt landscape, including pristine beaches, secret coves and lush forests. You might even spot rare animals here, such as the Mediterranean monk seal. To explore the flora and fauna of the island, it’s worth hiking through the imposing Kastanorema Gorge, which starts as a narrow riverbed in Kastania before turning into a full-blown, winding gorge between steep cliffs and rocks. 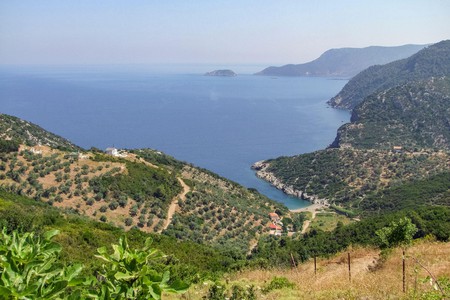 Enjoy the coastal scenery around Alonnisos, one of the greenest and most unspoilt Greek islands | © PRILL Mediendesign / Alamy Stock Photo

It probably doesn’t get more picture-perfect than Santorini. Shaped as a semicircle formed by a half-submerged caldera, this volcanic island is a tourist magnet, thanks to its black-sand beaches, attractive villages and sunset views. Influencers and Instagrammers flock here to snap that perfect selfie against the sunset, or in front of Cycladic white houses and churches. Gorgeous cliff views, otherworldly, black-sand beaches and an accessible, active volcano that constantly exhumes sulphur and ash amount to a unique experience – guaranteed to win you a few more likes. 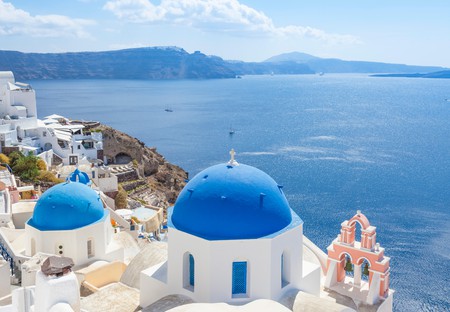 The Argo-Saronic Gulf’s most artistic island, Hydra has for centuries served as a quiet sanctuary for painters, musicians and writers. Its unassuming beauty, with a quaint harbour, serene beaches and cobbled pedestrian-only alleyways, attracted Henry Miller, Pablo Picasso and Leonard Cohen among others, who came here to create some of their best works. Cohen even bought a house on the island and lived here in the 1960s. These days, Hydra hosts exhibitions, art festivals and all kinds of cultural events that draw the next generation of artists here. 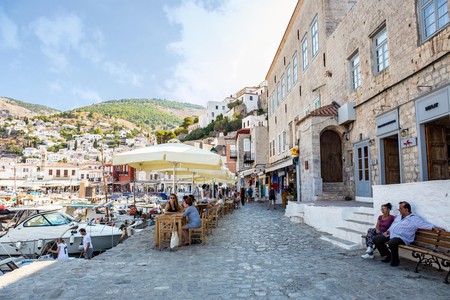 A favourite among the Hollywood set, Mykonos is defined by its cosmopolitan character, with stylish cafés and restaurants, as well as numerous high-end boutiques, lining the cobblestone alleys. There are more than 170 stores to choose from, so fashionistas will never be bored here. From local brands to prestigious fashion houses, these all come in the form of inviting, whitewashed hubs that are hard to resist. For all the chic international brands, try Soho Soho Mykonos, or pass by Greek designer Orsalia Parthenis’s minimalist boutique for a more local, authentic experience. 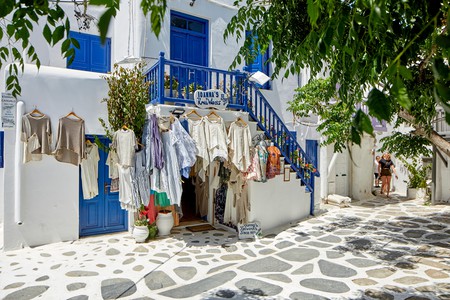 The epicentre of the Minoan civilisation (documented between 3000BCE and 1100BCE), Crete has one the richest histories in Greece. You can marvel at archaeological museums and monuments, notably the sites of Knossos and Phaistos. The palaces in Heraklion remain largely intact, revealing centuries of Crete’s sumptuous past.

The island of Rhodes, with its grand temples, ancient cities and ruins from the Hellenistic and Roman periods, makes for some captivating history tours. Meanwhile, Zagora, on Andros, is the site of Early Iron Age settlement that dates back almost 3,000 years. And the little island of Delos has a museum that hosts an impressive archaeological collection of around 30,000 vases, 8,000 figurines and 3,000 inscriptions. 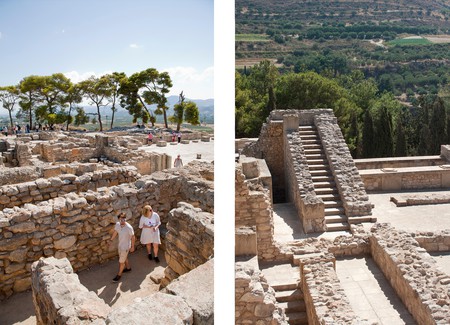 Whether you’re a deeply religious person, or simply someone who’s intrigued by the spiritual world, Patmos should be your go-to Greek island. A Unesco World Heritage Site, Patmos’s Cave of the Apocalypse is where St John (one of the 12 apostles) received the visions that led him to write the holy Book of Revelation around 95CE. Fans of the spiritual will also love the majestic 11th-century monastery of Saint John the Theologian, which houses precious religious artefacts. An important hub of hagiography during the Renaissance, Patmos still carries those holy, spiritual vibes that are bound to pacify even the most anxious of souls. 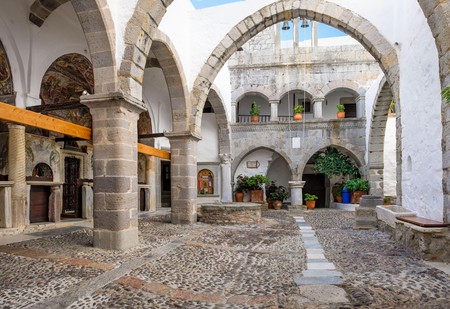 The monastery of Saint John the Theologian, in Patmos, founded in 1088, is a Unesco World Heritage site | © Hemis / Alamy Stock Photo
Give us feedback