Travelling During the Pandemic: What to Expect in Greece 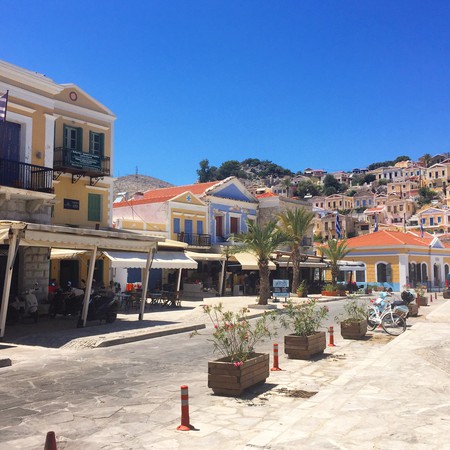 What can tourists expect when they arrive at their chosen holiday destination? | © Gemma Knight / Culture Trip

With restrictions on all-but-essential travel slowly being eased, the great British public is no longer grounded – but what should you expect once your plane touches down? Culture Trip writer Gemma Knight took to the departure lounge with the first wave of post-lockdown holidaymakers to get the latest.

It’s mid-July – five days before the Greek government is expected to lift its ban on direct flights from the UK – and our flight from Hamburg has just touched down in Rhodes, the popular Greek island that sits just off the Turkish coast.

The precautions we’d encountered on the journey – hand-sanitiser stations at the airport, mandatory face coverings on the plane – had been exactly as expected. We’d been inundated with emails from the airlines in the weeks leading up to our departure, each one containing helpful “guidelines for healthy flying” (avoid aisle seats, don’t queue for the toilets, check in online), and the airports had been as fascinatingly empty as we’d hoped. 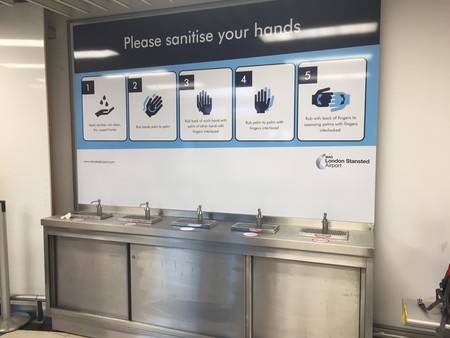 But now we’re on the ground, in a foreign country, during a pandemic, and curious to see first-hand how coronavirus has made its presence felt.

At passport control, our Passenger Locator Forms are taken and inspected. British. We’re sent over to a row of testing stations separated by blue screens with two other Brits (who, like us, seem to have leapfrogged the UK-flight ban by changing planes in Germany), where we show our passports again and are each led into a booth. Swab tests are done, then we’re told we’ll be contacted in the next day or so if there’s a positive result, and sent on our way. 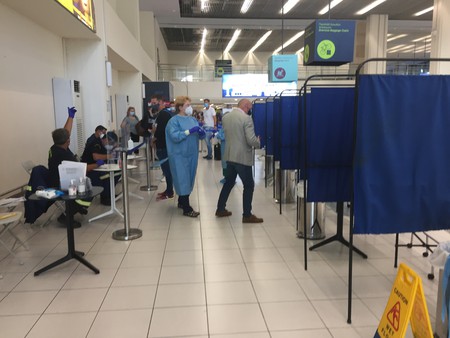 Having heard it was common practice elsewhere, we’d expected to be kept in the airport until they could be sure we weren’t carrying the virus – surely an unwitting carrier could spread the virus like mad in a day or two? But it’s immediately clear that our tourist pennies are a far higher priority. The Greek government wants us out there, buying meals and souvenirs, not stuck in the airport.

And that’s the crux of it. With the government offering most Greeks little or no financial help, and the hospitality industry so central to the economy here, most have found it a serious challenge to weather the pandemic. There have been few – if any – cases on many of the islands, and while locals are keen to protect themselves and their families, they also need to support them. And it’s clear that the focus is on getting tourism up and running again as quickly as possible.

It’s tempting to wonder whether not having witnessed the virus first-hand has stopped some Rhodes residents from grasping its full severity – but talk to the locals, and you soon see their fear of Covid-19 is very real, just not quite so tangible as their fear of another economic collapse. 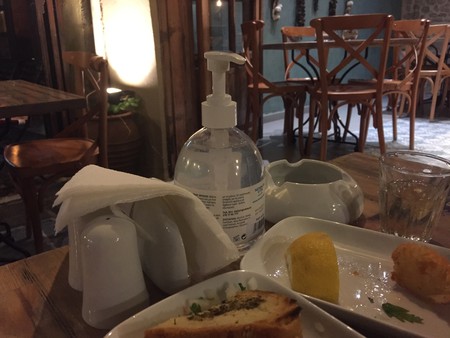 We spend a few days in Rhodes, where large bottles of hand sanitiser sit outside every shop, at the tills of most supermarkets and on the majority of tables at bars and restaurants. Staff all wear masks of some sort, as do most tourists and a smattering of locals. Order a drink, and the usual ramekin of peanuts appears in an individually sealed plastic pot. Some restaurants even bring your cutlery in sealed plastic packets, and every table is emphatically cleansed between customers.

“It’s very quiet this season because of Covid – the tourists are scared,” says Nikos, who drives a taxi on Rhodes. “But here, [Covid] is not a problem. You can see, there are masks and cleaning, and almost no cases. The problem is with the hospitals – they don’t have so much space for Covid on Rhodes, so we have to be careful.”

“I just wish the government would decide one way or another,” says Christos, who works in a jewellery shop in Rhodes Old Town. “I want them to say either ‘everyone can come’ or ‘no one can come’. Like this, most tourists are still staying away, but also we have more risk.”

Next, we island-hop for a few days. The big ferry companies – Blue Star Ferries and Dodekanisos Seaways – insist you provide a Passenger Locator Form when you board, and that all passengers and staff wear a face covering for the duration of the voyage (although, for passengers, this is rarely enforced past embarkation). 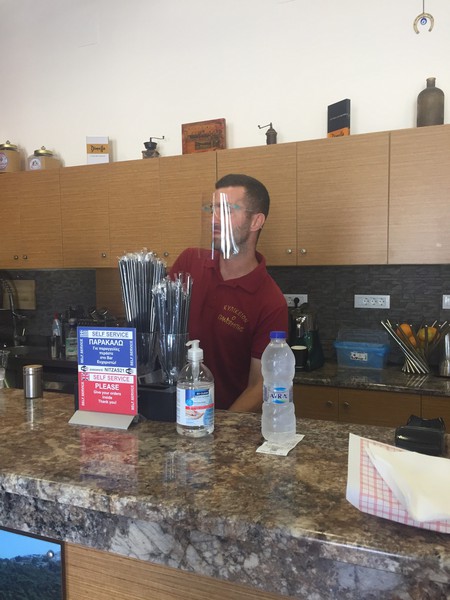 On the island of Symi – Rhodes’ closest neighbour, home to just 2,600 people – it’s a very different story. Symi is almost entirely dependent on tourism, and to date, there have been no cases of Covid-19 reported here. Not having witnessed its gravity first-hand – and feeling the lack of tourist euros even more keenly than her larger and more industrially diverse sister – the island’s attitude is a relaxed one: adhering to government-mandated Covid-19 regulations is a means to an end – ticking a box to get the hospitality sector moving again (and avoid a €5,000 fine) – rather than a deliberate choice.

Masks are worn by staff at most bars, restaurants and shops, but rarely by anyone else, and in many cases, they wear the popular mouth shield, a two-inch-high screen attached at the ears that rests on the chin and is open from above (much more palatable than a surgical mask in 30C-plus temperatures, but far less effective at preventing the spread of germs). There are no individually sealed pots of peanuts here, and the woman who dons her mask as she boards the local bus is immediately distinguishable as a tourist. 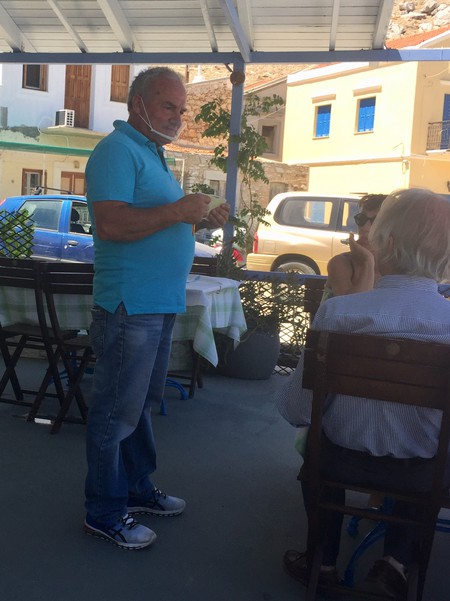 The effectiveness of the mouth shield is up for debate, but it’s certainly more comfortable than fabric masks in the heat | © Gemma Knight / Culture Trip

Back in Rhodes, it feels almost busy in comparison to sleepy Symi. However, we’re told that 50 percent of the hotels in Rhodes won’t open this year, and the tourists coming to those that have are loath to venture outside.

“The people who do come, many of them just stay inside their hotel – they’re too nervous to go out to the bars and the cafés, so it doesn’t help the local people,” says Nikos.

Nevertheless, the increase in tourist numbers over the course of a single week in the Dodecanese is impossible to miss. Ferry companies have started to bulk up their drastically reduced services again, and with each boat that arrives, what was once a trickle of disembarking passengers – often mostly Greek mini-breakers and tradespeople – is now a throng of French, Germans, Scandinavians and a few Brits. Not yet vast numbers, but certainly an improvement.

For many potential holidaymakers, the burning question is whether the reception at their chosen destination will be a warm one – will they be resented for bringing the risk of Covid-19 with them, or welcomed for their spending power?

In Greece, at least – where the choice for local businesses, as in so many places, is caution or economic survival – it’s resoundingly the latter.