The Most Beautiful Churches In Greece

Aegean Sea | © hans-johnson/Flickr
Scattered throughout the country, including the mountain tops and isolated islets, churches are everywhere in Greece. Many are architecturally stunning, while others stand out in their simplicity. Here is a small list compiling some of the most beautiful sacred places in Greece you should visit.

Steeped in history, the island of the Apocalypse is a beautiful area, and one of its gems is the Holy Monastery of Patmos, founded in 1088 by Holy Christodoulos. Perched on top of the mountain, the monastery not only dominates the main town on the island but also the island itself. The site was home to an Early Christian church where an ancient temple dedicated to Goddess Artemis used to stand. 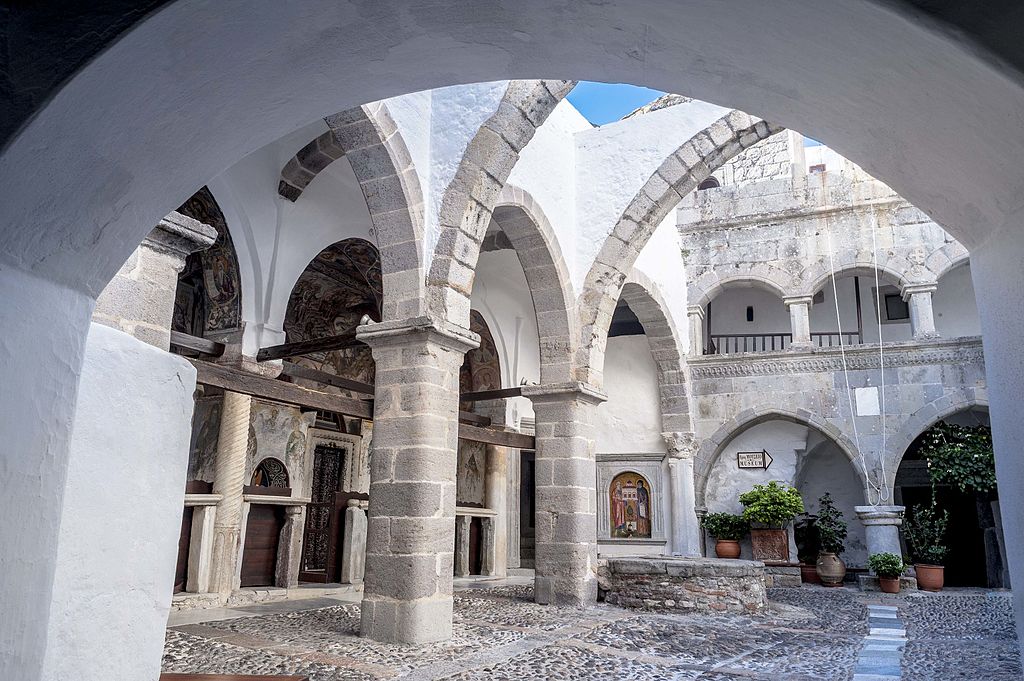 The Church of the Seven Martyrs – Sifnos

Church
Church of Seven Martyrs, Sifnos | Church of Seven Martyrs, Sifnos
They call Sifnos the island of 336 churches, and even if it may be an urban legend, the area is no doubt filled with little chapels and monasteries. Located in a picturesque setting, the Church of the Seven Martyrs is situated near the small village of Kastro, on top of an islet. This beautiful Cycladic-style church is one of the most photographed locations on Sifnos, and for a good reason. Its white and blue dome stand out against the crystal blue waters of the sea.
More Info
Open In Google Maps
Kastro, 840 03, Greece
View menu
Visit website
Visit Facebook page
Send an Email
Give us feedback

The Church of Panagia Ekatontapiliani – Paros

Church
Inside of Panaghia Ekatondapiliani | Inside of Panaghia Ekatondapiliani
The imposing Church of Panagia Ekatontapiliani (or the Church of 100 Doors) is situated in Parikia, on the Cycladic island of Paros. Considered to be one of the earliest Byzantine churches in Greece, it was built in the middle of the 4th century. A legend states that there are actually only 99 visible doors, with the hidden, locked 100th door set to appear and open only when Constantinople becomes Greek again.
More Info
Open In Google Maps
Paros, Paros, 844 00, Greece
+302284021243
View menu
Visit website
Visit Facebook page
Send an Email
Give us feedback

The Church of Panagia Megalochari – Tinos

Church, Building
The Church of Panagia in Tinos | © JFKennedy/WikiCommons
Known as the ‘protector of Greece,’ the Church of Panagia Megalochari is located on the island of Tinos. It was constructed on top of a hill where people found the icon of the Virgin Mary, believed to be the source of miracles. Dedicated to the Annunciation of the Virgin Mary, the church is the most popular pilgrimage in Greece, with many devout pilgrims entering the church on their knees.
More Info
Open In Google Maps
Leoforos Megalocharis, Tinos, 842 00, Greece
+302283022256
View menu
Visit website
Visit Facebook page
Send an Email
Give us feedback

The Church of Agia Anna – Amorgos

The little chapel of Agia Anna is built on a rock by the sea, near the monastery of Hozoviotissa, also featured on this list. Located on Agia Anna Beach, a small rocky beach, the chapel is known for its simple traditional style. 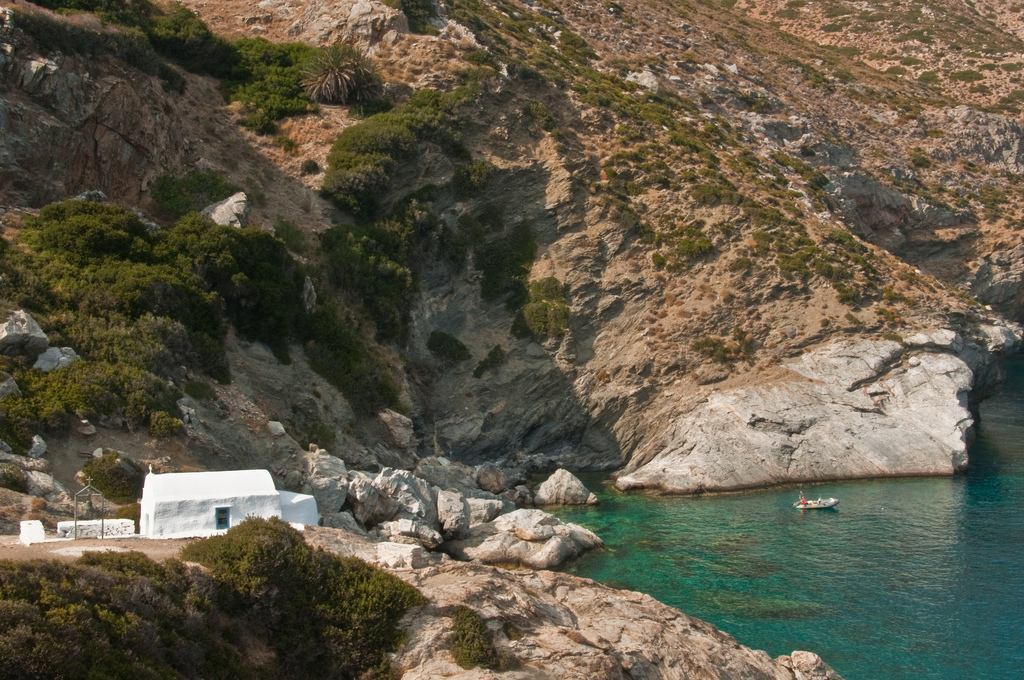 The Monastery of Hozoviotissa – Amorgos

Next on the list is the Monastery of Panagia Hozoviotissa, one of the most important Byzantine monuments in the Aegean. The impressive yet unusual 11th-century structure is built into the face of a cliff, 300 meters above the sea, where a miraculous icon of the Virgin, patron saint of the island, was found, and it attracts thousands of pilgrims who visit the place of worship for prayer and devotion. Because of its narrow architecture (the width of the building is only five meters), the locals dubbed it the ‘single-wall monastery.’ Even if you’re not religious, you are bound to be amazed at the beautiful scenic location. 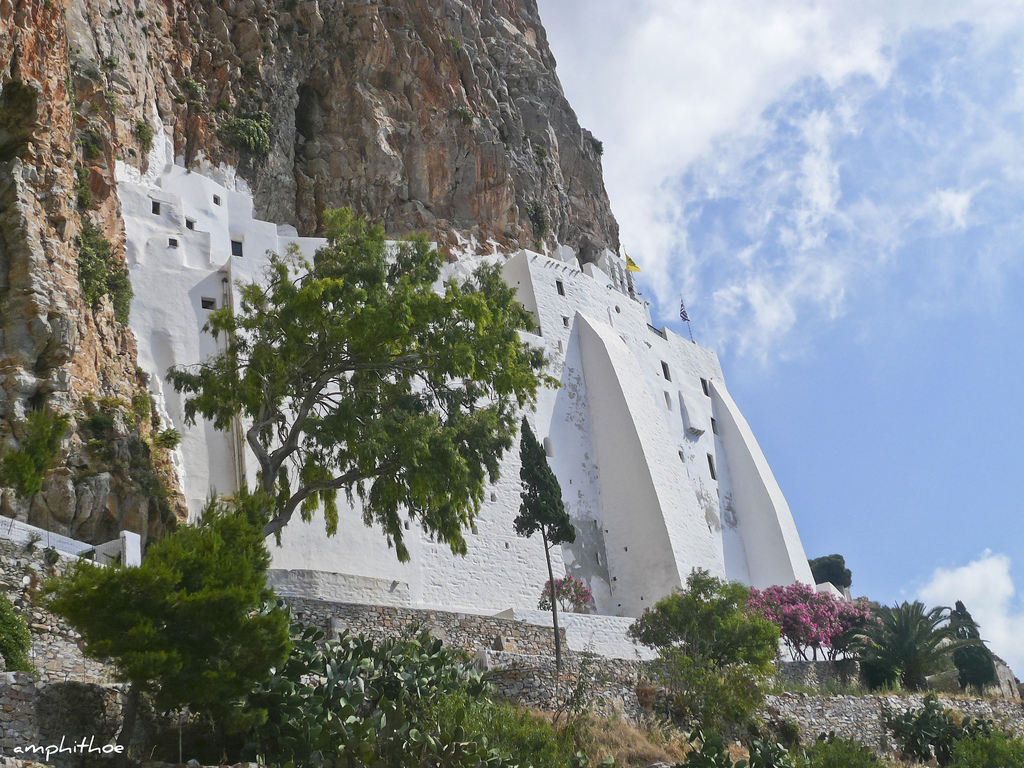 The Church of Agios Isidoros – Chios

In the northern portion of picturesque Chios, near Sykiada, lies the magnificent little chapel of Agios Isidoros. Set on a bay with a small pebbly beach, it is without a doubt one of the most photographed places on the island. The chapel was built on the ruins of an Early Christian temple, and the interior is just as stunning as the location. The mosaic floors represent three different construction phases, and various sculpted architectural elements are still standing today. The chapel hides a crypt where the holy relics of Agios Isidoros and Agia Meropi are kept. 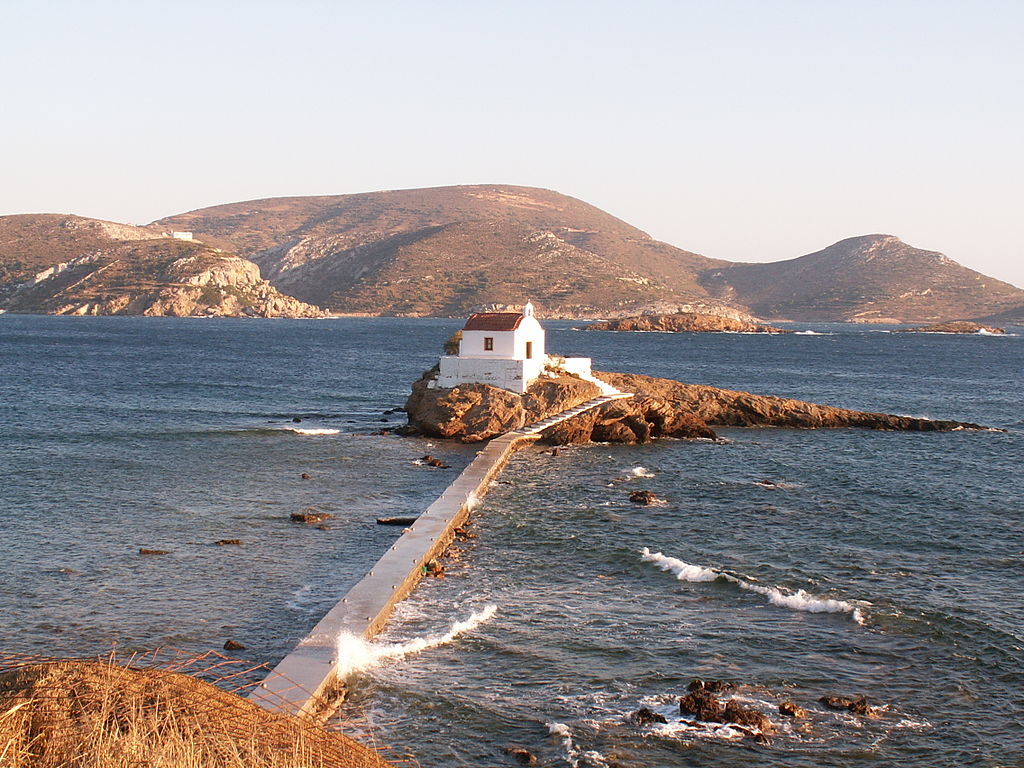 On a little peninsula in the middle of the man-made Lake Doxa, in the Corinthia Region, stands the charming church of Agios Fanourios. In the past, the Monastery of Agios Georgios stood there, before it was relocated to higher grounds. From some angles, it appears as though the humble temple is floating on the lake, and though it is smaller in stature, the little church undoubtedly has that je-ne-sais-quoi, making her one of the most beautiful churches in the country. 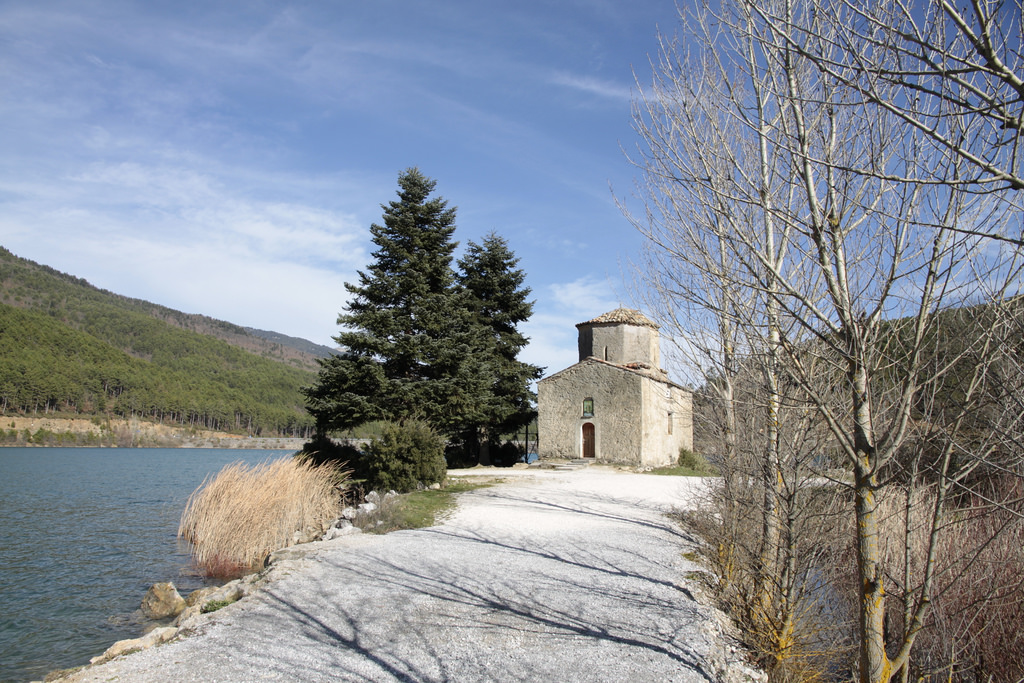 The unassuming church of Agios Ioannis enjoys a majestic and quiet location in Skopelos. And even though the movie Mamma Mia helped put it on the map, the small church has always been a top attraction on the island. Perched atop a cliff near the village of Glossa, the intimate structure is not easy to access. Visitors have to climb 106 steps to reach it, but they are always rewarded for their efforts; the impressive vistas from the church is worth every single step. 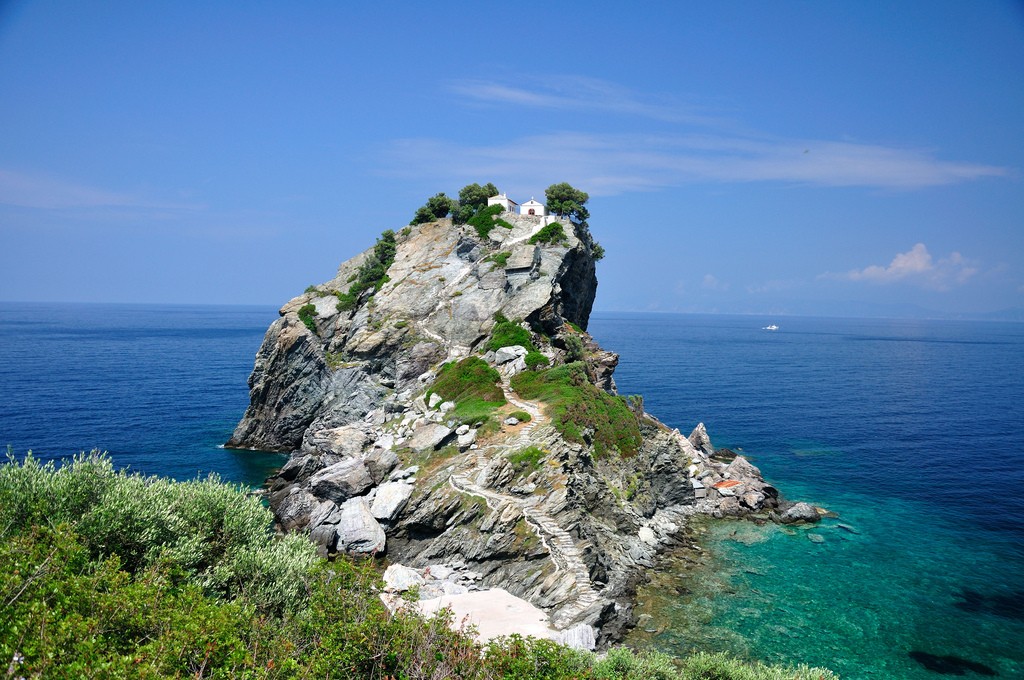