The Most Beautiful Churches And Religious Sites In Lesbos

The Greek island of Lesbos is famous for its historic churches and monasteries. These monasteries were founded by monks that fled the Roman (Byzantine) capital of Constantinopole in the 9th century in the midst of the Iconoclastic Controversy. Today, Lesbos is a popular destination for religious pilgrimages and for those who like to combine summer holidays with exploring cultural attractions. Below we have listed a few of the most important churches and religious sites on the island.

In the main port of Lesbos, the holy church of Agios Therapontas’ prominent location near the pier makes it one of the most recognisable buildings of the town. Built upon an old hospital that featured an older temple dedicated to the same saint, this spectacular building is the biggest church in Lesbos. It was inaugurated in 1935 and it combines different architectural elements of its time such as Baroque, Rococo, Neoclassical and Gothic. It is well worth entering the church to admire its beautiful altar and the icons. 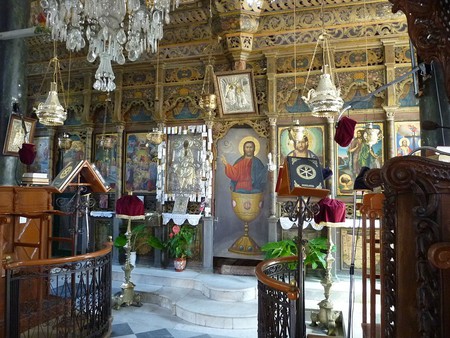 This small church is built on an imposing 40-meter rock in the village of Petra and it is dedicated to ‘Panagia’ (Mother Mary). The icon of Panagia is considered miraculous and attracts numerous religious pilgrims every year. Legend has it that a captain of a ship that was anchored in front of the rock in Petra decided to build the church after his icon of Panagia went missing one night. An unexplained light “like a star in the sky” pointed to the top of the rock, which he climbed to find her there. After three days of the incident repeating every night, the message was clear that a church dedicated to the mother of Christ must be built on the rock.

Built initially in 1170AC by monks, Panagia Agiasou was rebuilt in 1806. This beautiful church in the mountain village of Agiasos is famous for its miraculous icon of Panagia. (Mother Mary holding the Son). The story of the icon dates back more than 1,100 years ago, when it was brought to Lesbos by a priest named Agathon who had fled the Roman (Byzantine) city of Constantinopole. Agathon, which until then served at the royal court at the city, became self-exiled during the events of the Iconoclastic Controversy. After 12 years in the Christian community of Palestine, he decided to travel to Lesbos where he brought with him the icon from Jerusalem in 803. Panagia Agiasou is considered to be miraculous and one of the most important pilgrimages in Greece. 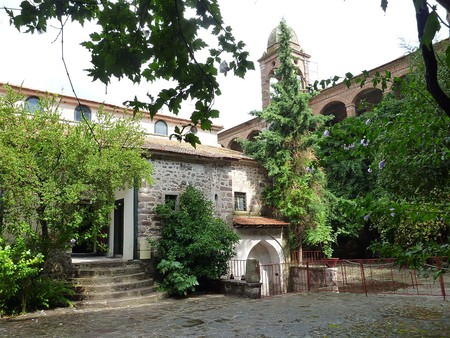 This spectacular Byzantine monastery was build in 1526 and historically has played a major role supporting the financial and social development of the island. The monastery was built upon the ruins of another monastery, which was destroyed by the Ottomans around the year 1462, and of which unfortunately very little is known. The monastery today is a serene religious site with monks that take care of the picturesque surroundings, decorated with flowers and peacocks that roam free. It also has an on-site library with valuable Byzantine texts, and has even created a digital library that is open for all those who would like to access some of these unique texts.

Aghios Athanasios is a beautiful cathedral in the main city of Lesbos dated in the late 16th/early 17th century. Located in the centre of the old town of Mytilene, it has a prominent gothic bell tower which is visible from considerable distance. It is considered one of the most beautifully decorated churches on the island, with an extraordinary wood carved altar in its interior. The sacred relics of St. Theodore, who is believed to have saved the entire island from plague in 1836, are also found in the church.

Moni Taxiarchi (Archangel Michael) in the village of Mantamados is perhaps the most important monastery in Lesbos as the guardian angel of the island. The icon of the Archangel is one of the few embossed icons in the Orthodox world, and it inspires awe and admiration with his strict expression and big black eyes. According to the legend, Saracens pirates attacked the monastery and killed all the monks. Only one young monk survived with the holy intervention of Archangel Michael. To show his respect he mixed soil with the blood of the dead fellow monks and created the sculpture of the Archangel.