The Most Beautiful Beaches on Rhodes, Greece 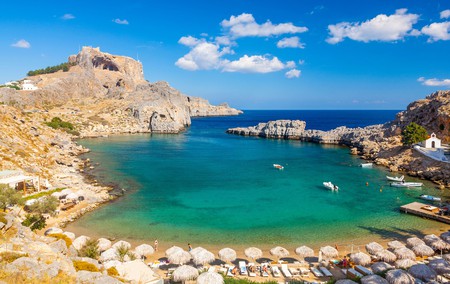 Rhodes boasts some of the most picturesque beaches in Greece, from the sandy shores of Faliraki to the windswept peninsula of Prasonisi.

The largest of the Dodecanese Islands, picturesque Rhodes is where world-class beaches, ancient ruins and lively nightlife sit side by side. Some of the beaches on the island front sleepy fishing towns of neat white houses cascading down to the sea, others sit beside tavernas and bars that come alive after sunset. Discover Culture Trip’s top recommendations of the best beaches on Rhodes. 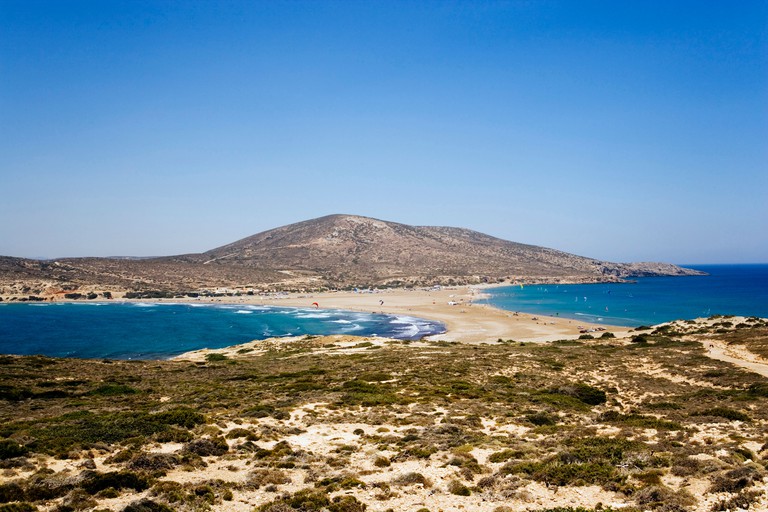 © Image Professionals GmbH / Alamy Stock Photo
Watch the kites dip and skim across the sky as you soak up the sun by the water. With the ocean on either side of a long spit of sand, this unique peninsula beach forms a causeway connected to Macheria at low tide. Located at the southerly tip of the island, the winds make it a pretty good spot for surfing and, more spectacularly, kitesurfing. Wetsuit and board hire are available in the summer. 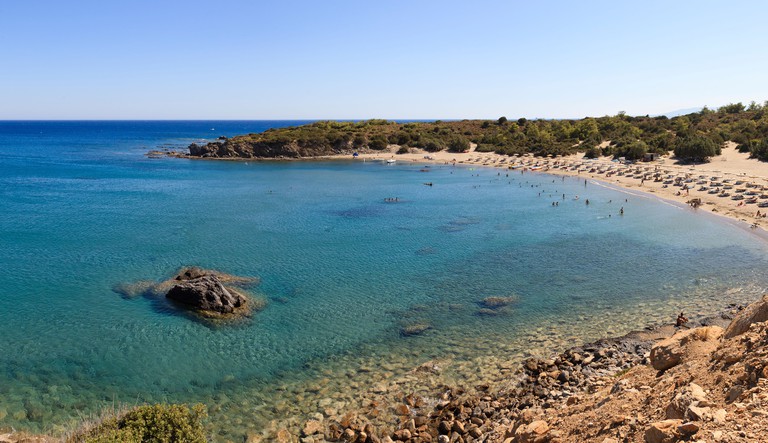 © Laszlo Szirtesi / Alamy Stock Photo
If low-key and natural are your main requirements for a beach, head to Glystra, a horseshoe bay of shallow aqua-blue waters surrounded by dunes. Weekends can get busy, but, in the week, there’s enough space for all. Hire a sunbed, and watch families, kayakers and pedalos take to the calm waters. Refuel at the little restaurant located right on the sands. 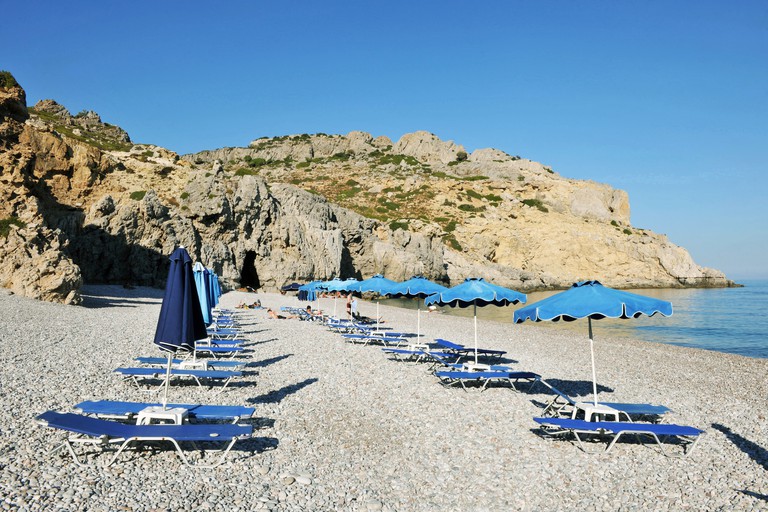 © Hackenberg-Photo-Cologne / Alamy Stock Photo
Swim to a sea cave beyond the reach of the sun, and watch the light play through the neon waters beyond. This Blue Flag beach on Rhodes’ east coast may lack sand, but it makes up for it in pure scenic beauty. The crystal-clear waters surrounded by towering cliffs and sea caves are the main draw; many day-tripping boats around the island stop by as this is a key swimming spot. Fill up on fresh fish at the little taverna. 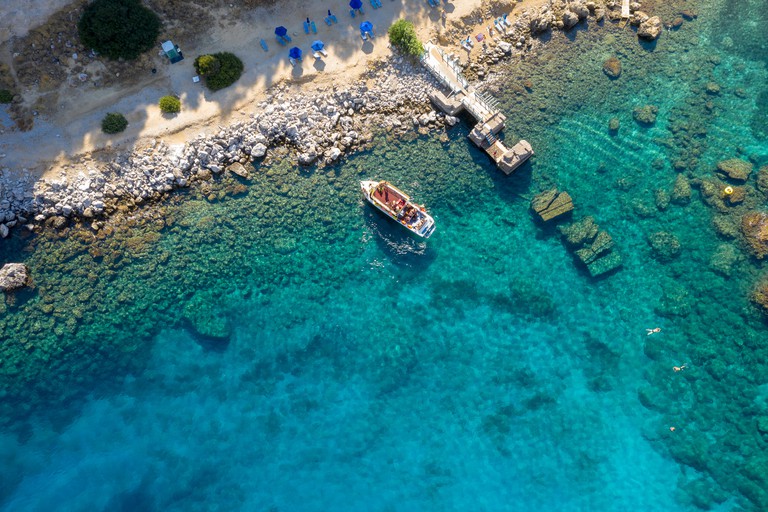 © Michele Falzone / Alamy Stock Photo
A slight whiff of controversy surrounds this much-loved beauty spot. When the actor Anthony Quinn filmed The Guns of Navarone in the early 1960s, he was so enamoured with this sheltered cove that he decided to buy it and turn it into an international centre for artists and filmmakers. However, the purchase was later annulled, while the case continued to be fought up until the early 2010s. As there is only a narrow strip of sand and rock for sunbathing, you’ll have to get here early to claim a space. Dip in the shallow emerald waters, surrounded by wooded cliffs and with not a building in sight. 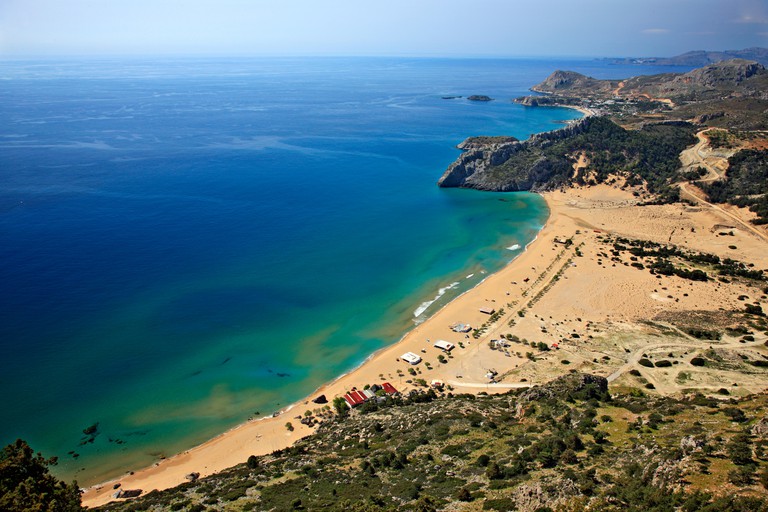 © Hercules Milas / Alamy Stock Photo
Take the penultimate turn on the road down to the beach to reach the monastery. The payoff for the 350-step climb to reach the Byzantine church are the views; look over Tsambika Beach, north over Kolymbia and across to Lindos. At Tsambika Beach itself, you’ll find a wide expanse of golden sand, meaning that, even in peak season, it doesn’t feel crowded.

Come to the most famous beach on Rhodes for people-watching. Oh, and the water is quite nice, too. Many of the neatly organised sun loungers are reserved for neighbouring hotels. However, there’s still plenty of space for those that come to soak up the sun by day and soak in the town’s famous nightlife once the sun dips. Chaplin’s Beach Bar is a favourite for cocktails with a view.

Pack your flippers and mask. Jordan Beach is a favourite snorkelling spot, thanks to its aqua-clear water. Rugged rocks surround this pretty and very private-feeling little bay, named for the simple but popular beach grill that serves hungry beachgoers. Bring shoes – you’ll need them to clamber over the shoreline. Make a day of it, and amble to Jordan’s Grill when it’s time to refuel.

Natural Feature
Facebook
Email
Twitter
Pinterest
Copy link
Share
Small but perfectly formed, the curving craggy cliffs surrounding St Paul’s Bay form a natural harbour. This means the sheltered waters are usually exceptionally calm, making it a favoured swimming and snorkelling spot. This sand and pebble beach is named for the exceptionally picturesque church built into the hillside beside the bay. In the summer, you’ll likely spot a wedding or two as you bask in the cooling waters.

If you want to see more of Rhodes, like one of the best bars in the city, you should first book a stay in one of the finest Greek hotels with Culture Trip. Once you’ve seen the best attractions Rhodes has to offer, hop over to Athens, and stay in a boutique hotel, or visit some of the historic sites in the capital.