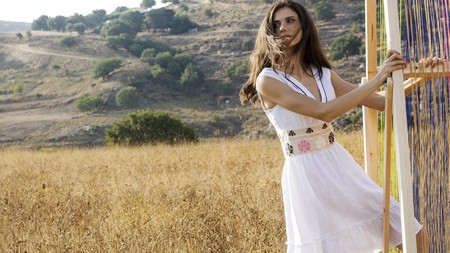 As they step on the treadles of their wooden looms, four textile designers from Greece prove that slow fashion is still alive. Using methods handed down to them through several generations, these weavers are urging travellers and modern fashionistas to invest in an ecofriendly future.

As sustainable fashion keeps on gaining ground on disposable couture, more and more designers are drawing on tradition and using natural resources to produce original pieces that respect their surrounding ecosystems. A number of Greek weavers are now using the ancient wooden loom, relying on an off-the-grid method of production to create unique clothes and accessories. Some will even teach you how to do it yourselves. 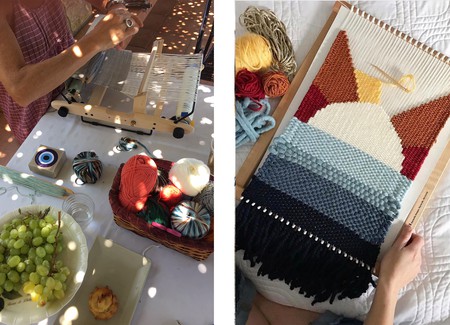 Homer says in his Odyssey, “… So by day she’d weave at her great and growing web- / by night, by the light of torches set beside her, / she would unravel all she’d done…” Penelope, the wife of Odysseus (or Ulysses), has come up with a clever plan to keep her suitors at bay, as she stoically waits for her long-lost husband to return. She promises to marry one of them as soon as a shroud she’s weaving on her wooden loom is complete. But each night, she unravels what she’s woven.

Just like in Homer’s Penelope, mastery of the loom was associated with women of the highest status in Ancient Greece. The vertical, warp-weighted loom they typically used is now at least 4,000 years old. With the appearance of more modern types of loom – such as the power loom – and eventually the sewing machine, weaving on the wooden loom lost its appeal. For decades, it was considered a lost art in Greece, practised only by a few senior women. Thankfully, some of those women passed it down to their daughters and granddaughters, helping keep the tradition alive.

Over the last few years, serious attempts have been made to revive the wooden loom in all its former glory, and at the same time, promote a slower, more sustainable way of making and understanding fashion. A number of Greek designers have turned to the loom to create unique pieces of clothing and accessories, relying solely on their physical strength which dictates the movements of the loom.

“The traditional wooden loom does not operate on electricity; it’s the weaver’s heart, mind, hands and feet that bring it to life. The whole process begins from a simple thread and ends with practically anything that can be thought of and designed,” says Anastasia Xenaki, an artisan working in Athens, who’s inherited the expertise and passion for weaving from her mother Eleni.

Together with business partner Petros Christoforatos, they have created LOOM%, a brand that hopes to acquaint people with Greece’s textile heritage through classic items with a modern twist. Using traditional weaving techniques, Xenaki incorporates customs and patterns from all over Greece into her homeware and accessories, while keeping the brand ecofriendly for the most part. 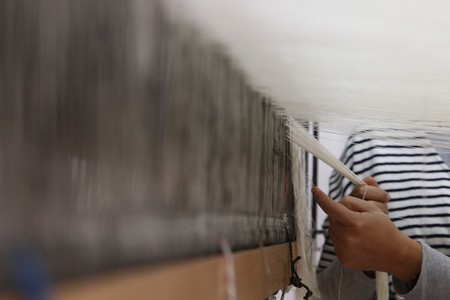 “All of the pieces are created with muscle power. We try to minimise our carbon footprint by using materials such as cotton, wool, flax and natural silk,” she says. “Our packaging is made of recycled materials and wood, while our next mission is to completely let go of animal leather, replacing it with plant-based and organic materials, such as mushrooms.”

Xenaki is not the only one making the most of her roots and the wooden loom. Designer Faye Chatzi was taught the craft a while back, by female weavers on the island of Mykonos, which is known for its rich weaving tradition.

She follows an ecological process from start to finish, collecting wool from sheep – without hurting them – then washing it and spinning it to form yarn. She weaves the raw materials on the loom or sews them onto fabrics of silk, cotton, linen or viscose, to create pieces like dresses, beachwear and shawls inspired by the Hellenistic period and the Minoan civilisation. Chatzi even makes the silk in house, after breeding the silkworms herself. Everything is done manually using old-school, entirely ecofriendly tools and techniques, just like the ones used in Ancient Greece. 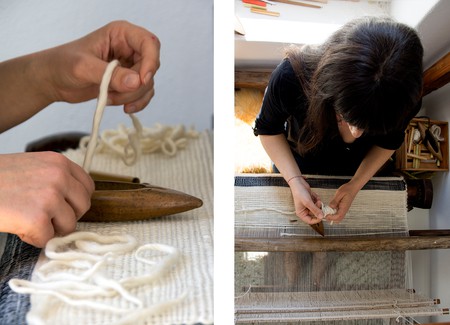 She sees weaving as a deeply meditative process. “I am always influenced by the sea, the rocks and the wind, entering a state of meditation whenever I interact with nature. That energy comes through in my designs as well. You can see the light of Mykonos reflected in my pieces,” she says.

Reusing materials or entire pieces to create new ones is a big part of these women’s work, based on their belief that slow and sustainable fashion can be so much better than fast fashion, in so many ways.

Coming from the Greek alpine village of Metsovo, Alexandra Bissa is one of those textile designers who believe that weaving on the loom has a place in fashion and will continue to have one, since “people need quality; they need to know that the items they are wearing are one of a kind – this can only be achieved through a slow process, by creating a specific number of pieces which people are going to make good use of, and not a mass of clothes which is going to end up in trash cans.”

Growing up, Bissa constantly found herself surrounded with her grandmother’s textiles which made her curious about weaving. Eventually, she asked her aunt Athena, one of the last remaining female weavers in Metsovo, to teach her the craft. “Even today, I turn to my grandmother’s textiles for inspiration,” she says, “always discovering something new. Not being able to weave using my own two hands seems unthinkable to me. Being part of every stage of the process is what defines me as a creator.” 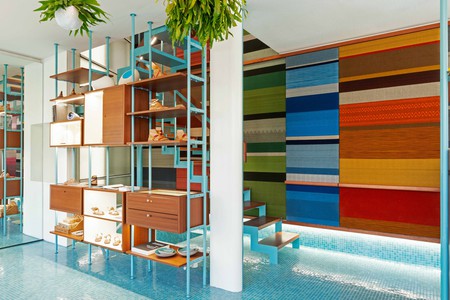 She now works from her studio in Athens, creating bespoke pieces using natural threads, which she finds in companies that share her own green mindset. “I choose the ones that care about their employees and which use modern techniques that protect the environment,” she says.

Another weaver embracing sustainability is Alexandra Theohari. The designer was taught how to work the loom by a group of nuns at the weaving studio of the Monastery of St Irene on the island of Crete. Soon enough, she founded her own brand, which was born out of her love for Crete. The island inspires her work through its long history, beautiful landscapes and the various patterns and images found on Cretan textiles from the 16th and 17th century – from peacocks and flowers to snakes and goats.

As she says, “KLOTHO [her brand] builds on tradition without altering its essence, but by giving it a fresh look.” In Greek mythology, Klotho is one of the Three Fates, or “Moirai”, who spins mortals’ thread of Life, connecting the past to the future.

Theohari takes pride in the brand’s zero-waste philosophy. “We only work on traditional wooden looms that rely on manual work and we make sure we’re reusing all of our leftover materials, incorporating them into our packaging or the lining of our clothes. Our threads are natural, made of cotton, natural fibres, flax or bamboo.” 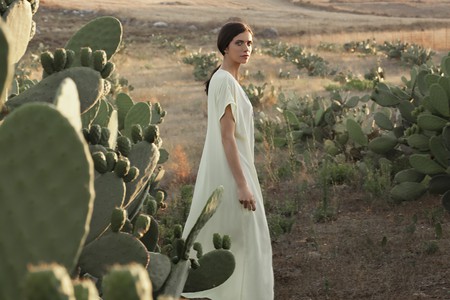 The message coming from all four women is clear: weaving on the wooden loom is an excellent way of protecting and giving back to nature while allowing weavers and consumers to truly connect with the items they’re making or buying, celebrating Greece’s textile heritage one thread at a time.

Some weavers also continue to pass their craft down to younger generations. Theohari and Xenaki teach weaving workshops, inviting schools and travellers from around the world to join them at their studios and learn all about the loom’s secrets, before creating their own textiles. Xenaki believes that “we have a long way to go until younger generations can fully appreciate the wooden loom, however the first steps have already been made and that’s a good sign. The loom is an endless source of creativity for those who know how to operate it.”

But how ‘sustainable’ can sustainable fashion be for its creators?

Producing one-off or bespoke pieces on a wooden loom means that each of those pieces requires a lot of time and effort, while the costs attached to all of the ecofriendly materials and procedures are, more often than not, quite high.

“If you want to maintain a brand of limited production, one that sells singular pieces which respect the environment and the people involved in their making, then you have to make your peace with the high costs,” says Chatzi. “It’s a matter of perspective and overall philosophy. In the end, people will reward you for it, but you know from the start that you will be addressing a smaller number of buyers who are cultured enough to understand your mission, and who will have the means to support it.” 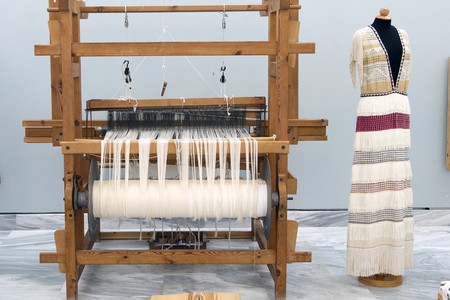 All strenuous efforts and high production costs aside, the feeling of serenity and fulfilment that comes from weaving on a wooden loom never wears off. Chatzi plainly describes it as “freedom”. Next time you’re in Greece and about to step into a department store, think of those ladies instead. Who wouldn’t invest in freedom?