The Greek Choreographers to Know About Now 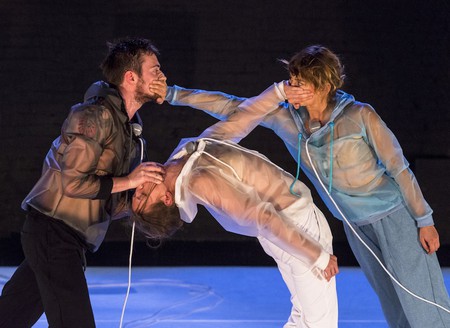 10,000 litres by Evangelia Kolyra at The Place, London | photo by Foteini Christofilopoulou

As the international narrative about Greece expands to celebrate the creative enterprise within the country, Culture Trip spotlights on the the most exciting Greek choreographers to know about this year.

Athens-born dancer Katerina Andreou is an exciting contemporary choreographer and dancer. With degrees from both the University of Law in Athens and the State School of Dance, Andreou was awarded the Prix Jardin d’Europe 2016 for A Kind of Fierce and has exhibited performances in France, Germany and America. Her works conveys a sense of spontaneity while being totally in control. Dance is used to explore the body as an instrument in isolation, to powerful effect.

Elpida Orfanidou was born in Berlin and grew up in Athens. The choreographer and dancer studied Pharmacy and piano at the same time as studying dance – the latter at Athens’s Grigoriadou dance school. Orfanidou’s brilliance is in her capacity to manipulate and create drama and tension from seemingly safe and innocuous spaces. Through direct discussions with the audience that are mixed with dance, an empty stage is transformed into an obstacle-ridden landscape. The physicality of her performances contains the friction and tension inherent in her questioning, probing and humorous approach.

London-based Greek choreographer Evangelia Kolyra is interested in conceiving performances that respond to structure. This can be both in terms of the performance space and by investigating more fluid structures of communication such as language. Kolyra often works with multiple performers, bringing dancers together to create complex, highly demanding and compelling modern works. Performances are dark and somewhat dystopian yet Kolyra’s works also offer lighter and more humorous threads. The result are immersive and fluid works which synchronise dancers into one powerful narrative.

A graduate from the State School of Dance in Athens, Iro Apostolelli is a choreographer, dancer and practitioner of alternative medicines. She co-founded the dance company Carnation with Agni Papadeli Rossetou in 2009. Apostolleli’s work is concise and focused, using dance to offer meditations on how the human body relates to space and time, as well as to each other.

Anastasia Valsamaki is a Greek choreographer who creates exciting, dynamic group works. A graduate from the Greek National School of Dance (KSOT) in 2015, Valsamaki has fast established an innovative vision in her work. Her work ‘Sync’ masterfully brought nine dancers together for a meditation on the body and community; how humans relate to each to other, and an investigation about the nature of collective experience.

Harry Koushos was born in Cyprus in 1988. His work is focused on the externalisation of the psychological impact of modern society on the individual. Performances are ambitious and visually impactful, combining clean, purposeful movement against theatrical stages. The synchronicity of the performers often convey a sense of ritual, bringing audiences into a communion with the dancers.

Iris Karayan is one of Greece’s most prolific and dynamic choreographers. She is a graduate of the Greek State School of Dance as well as Goldsmiths in London. After completing her training Iris Karayan quickly gained recognition for her work, including being awarded first prize at the Jarmila Jeřábková Award in the New Europe Festival in 2010. Her work is extremely varied, with recent projects including the performance within a sound installation (Moving parts, 2016) and the interpretation of work by choreographer Trisha Brown (Manual Solos, 2017). Karayan has shown widely across Europe, garnering acclaim for her emotive and imaginative vision.