The Best Towns and Villages to Visit in Santorini, Greece 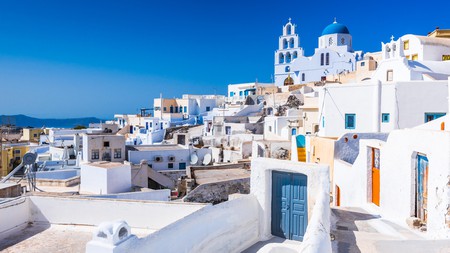 You know that typical view of the Greek islands? Blue-domed churches and white-washed buildings overlooking the glittering Mediterranean. That’s the Santorini streets – or more specifically the astonishingly pretty town of Oia. Discover more idyllic villages with our guide.

The Cyclades island of Santorini is probably known for its hillside villages that look like something from an Escher painting, turquoise waters and jaw-dropping sunset views. But below the surface, there’s a unique depth – from its long wine-making tradition to its smouldering active volcano. Here are the best towns in Santorini to explore on your next trip. 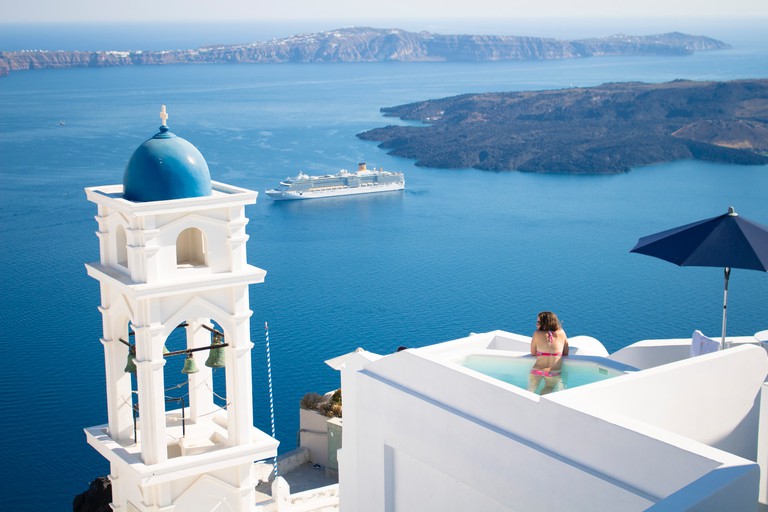 Photo by Hello Lightbulb on Unsplash
With its name meaning “view spot”, Imerovigili is known as one of the balconies of the island. Perched on a cliff, it offers unparalleled panoramics of the caldera and volcano. You can explore the remains of Skaros, a 13th century Venetian palace, before enjoying some of the local delicacies. The Skaros Fish Tavern is a great place to catch an epic sunset. Try the tomatokeftedes, made from the island’s small cherry tomatoes, and the grilled catch of the day. 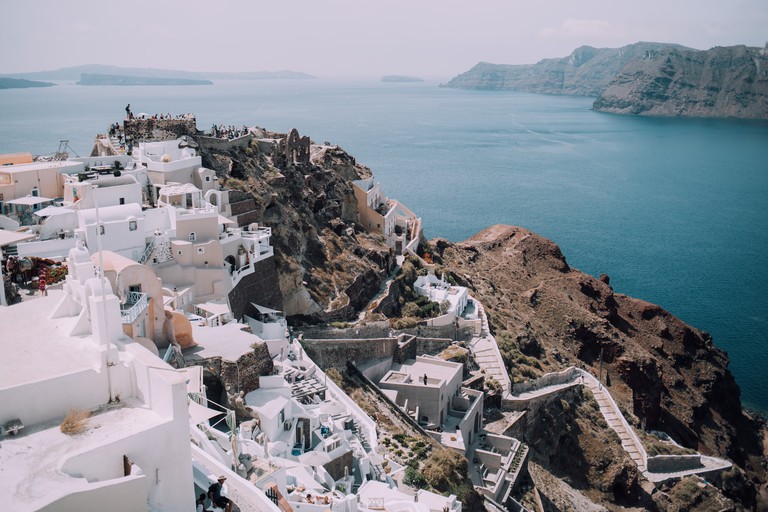 Photo by Charlie M on Unsplash
Formed of white-washed houses carved into the rugged cliff top and overlooking the vast caldera, it’s little wonder that Oia is the most photographed village in Santorini. If you can handle a steep climb back up again, then don’t miss Ammoudi, Oia’s tiny port which offers incredible views of the red cliffs and harbour. It’s also a great place for cliff diving, if you’re brave enough. For a unique experience, check out the Atlantis bookstore that’s cut into a cave. 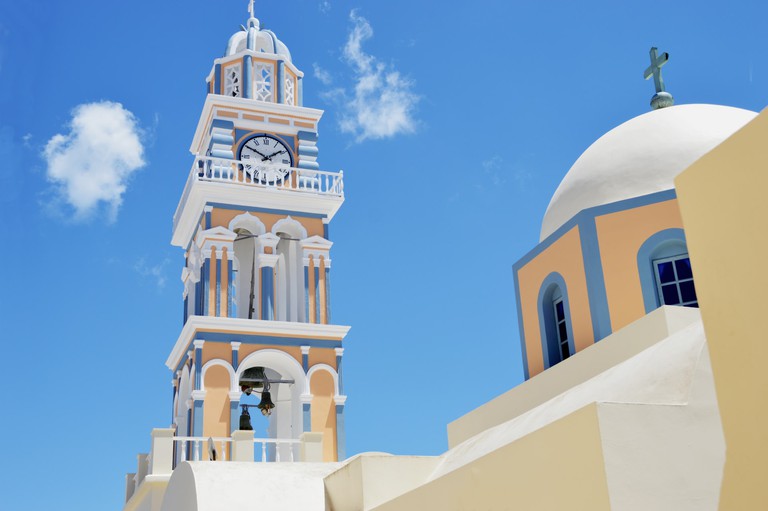 Photo by henry perks on Unsplash
Most of Santorini’s shopping can be found in Fira, the capital. It’s a brilliant place to stock up on traditional produce, quirky souvenirs and handmade crafts. Take the cable car – or a donkey – to the small port where you’ll find numerous restaurants and souvlaki stands. You can learn about the island’s culture in one of Fira’s museums or, for a different type of culture, sample the Santorini Brewing Company’s donkey beers. You’ll find the brewery on the road between Fira and Kamari. 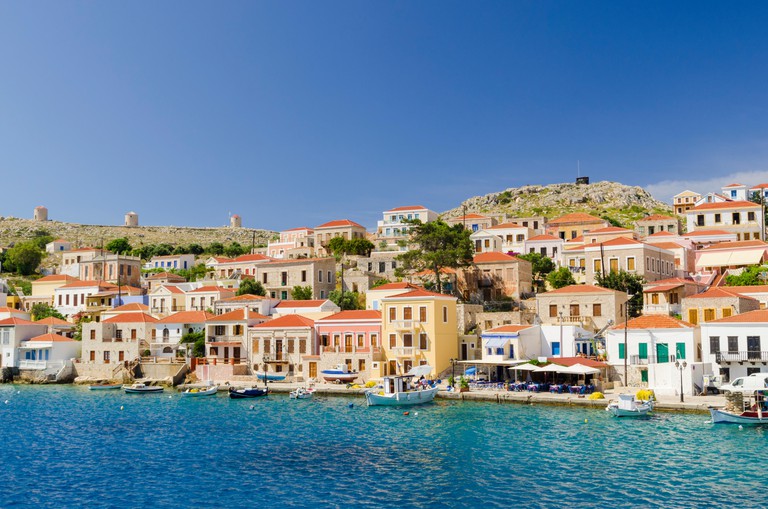 © AegeanPhoto / Alamy
Emporio is Santorini’s biggest village. If it’s whitewashed buildings, blue-domed churches and a tangle of narrow alleyways you’re after, you won’t be disappointed. Take a walk up Gavrilos Hill where you can see the ruins of eight traditional windmills. For an unusual stay, head to nearby Stunning Windmill House, a renovated mill with a pool. Don’t miss Emporio’s 15th century fortress, which looks as though it could slide down the hillside at any moment. 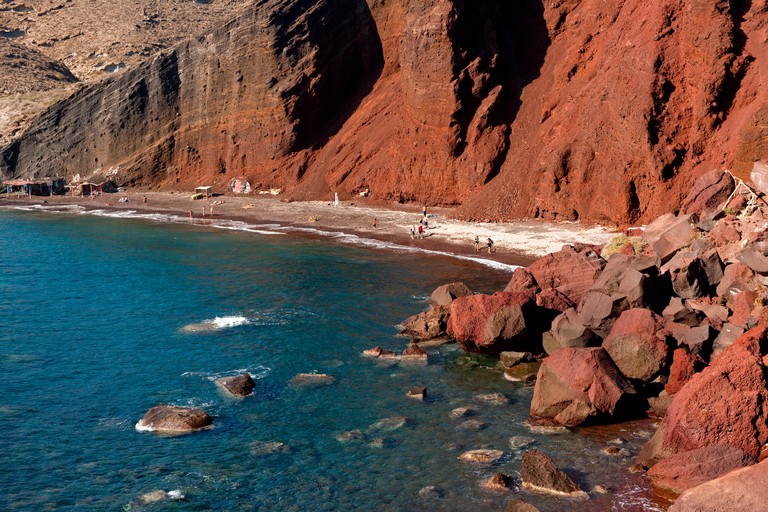 © Hackenberg-Photo-Cologne / Alamy
One for history buffs, Akrotiri was covered in volcanic ash in the late 17th century and is so well preserved it’s earned itself the nickname the Pompeii of the Aegean. The village also boasts the Red Beach, which looks like a scenescape from Mars. Don’t forget to check out those red rocks from under the water too, as there’s great snorkelling off the beach. Close by is Dolphin’s Fish Taverna, which offers fresh fish caught from the family’s boat that morning. 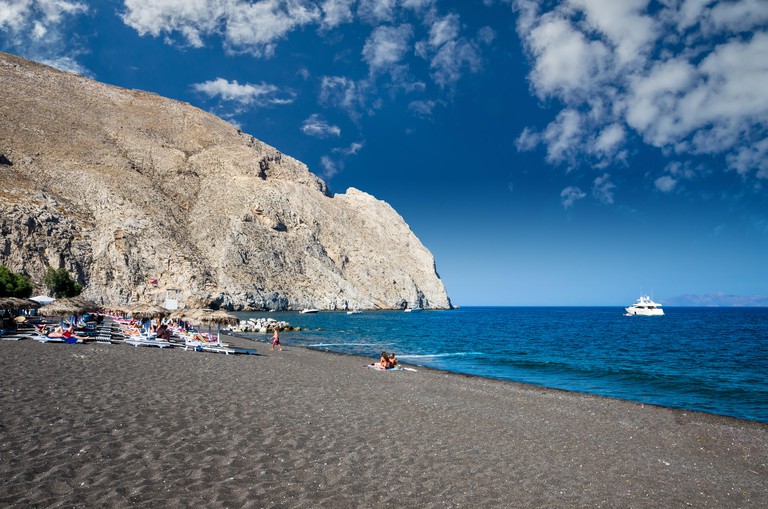 © Iosif Lucian Bolca / Alamy
Boasting several kilometres of black sand, Perissa, at the base of Mesa Vouno mountain, is home to the longest beach on Santorini. Step back in time when you visit the Museum of Minerals and Fossils, which has archaeological finds dating back 1.5 billion years. Looking for an adrenaline buzz? Perissa is the place to go for watersports in Santorini. Try flyboarding on a water-propelled jet pack for an unforgettable experience. 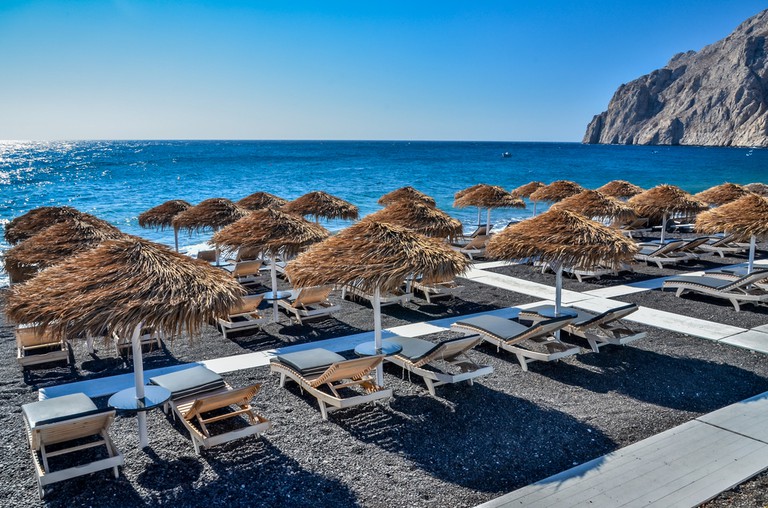 © FRANCU Constantin / Shutterstock
Kamari’s drawcard is definitely its long promenade, jam-packed with shops, cafes and lively tavernas, where you can enjoy traditional dishes and listen to live Greek music. Close by, in Vothonas, sip a cool glass of white at the Koutsoyannopoulos Wine Museum – it’s built into a cave, 8m (26ft) underground. The museum offers tours, tastings and the chance to buy a bottle of its renowned Nykteri wine. 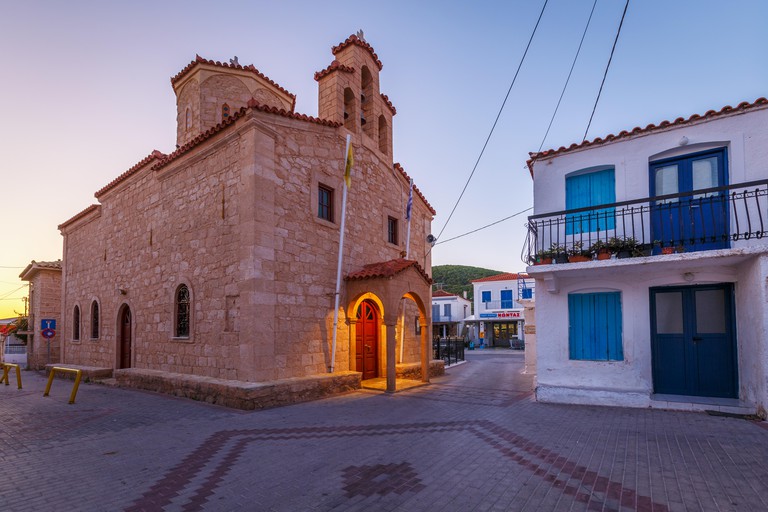 © Milan Gonda / Alamy
If you’re after a quieter, more chilled-out vibe, then look no further than Megalochori. In the centre of the village, there’s a tree-lined square, with plenty of restaurants and cafes – enjoy a leisurely coffee and watch the locals playing a traditional game of tavli (backgammon). Megalochori is set in wine country and home to the Gavalas winery, one of the oldest wineries on the island. Try their katsano or voudomato wines. 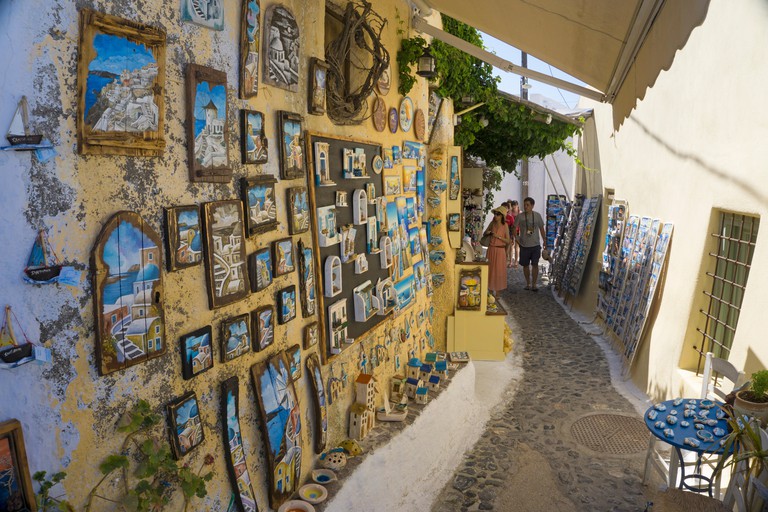 © Helmut Corneli / Alamy
The former capital of Santori, Pyrgos is a throwback to simpler times. At noon, the locals gather for ouzo and meze in the town square – there’s a real community feel to the village. If you can manage the climb, then Pyrgos Kasteli, a former Venetian castle, is worth a visit. In the evening, take a seat in one of the deckchairs in Franco’s Bar and enjoy a Bellini and some classical music as you watch the sunset.

This is a rewrite of an article originally by Ethel Dilouambaka.

Keep busy on the island with the best things to see and do in Santorini. Fill up in one of the top restaurants before heading to a cocktail bar to catch the sunset. For places to stay, discover these accommodation options for a local experience and book now on Culture Trip.