The Best Things to See and Do on Lefkada Island, Greece 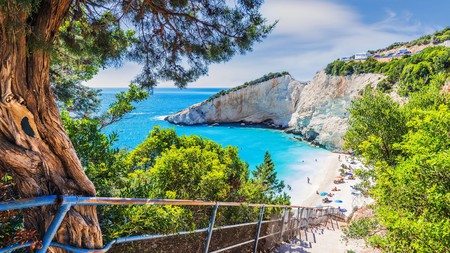 Getting to Lefkada Island is as simple as its laid-back way of life – where olive groves and vineyards supply local tavernas, and the shops, museums and restaurants in Lefkada Town keep visitors entertained.

Seeing as you can drive to Lefkada via a long “floating” bridge from the mainland, it’s surprising how unspoilt by tourism this Greek island is. Travel further inland, and you’ll discover sleepy mountain villages surrounded by farmland and vineyards, where local wines are gaining a growing reputation. This island is a burgeoning holiday destination for lazy beach days and time spent pottering between boutique shops, old-time restaurants and waterfalls. 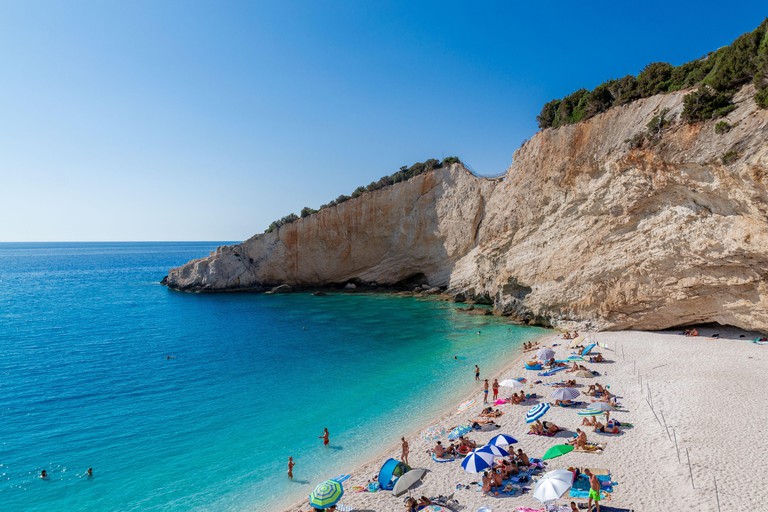 © Artur Kosmatka / Alamy
When you descend the slim staircase cut into the steep cliffs at Porto Katsiki, the view will feel like a dream. There’s an uncanny, milky quality to the bright blue waters, which meet sunbleached pebbles and chalky cliffs topped with unspoiled greenery. However, the beach’s reputation precedes it, so expect a bit of a crowd, especially in high season. As there are no facilities or parasols for rent, it’s best to go early or late to get a bit of natural shade from the cliffs and rocks. The hairpin bends on the drive to the car park are not for the faint-hearted, so consider taking a taxi.

Visit the Monastery of Faneromeni

In the far-northern village of Frini, this gleaming, whitewashed building with russet tiles and wooden shutters is an active monastery, where you’ll see monks en route to prayers. Visit for free (make a donation if you can) to see gilded mosaics and religious art, and get a feel for the monastic way of life. For kids, there’s a mini-safari on offer, too, with deer, parrots and turtles in enclosures in the gardens.

Seek out the magical Dimosari Waterfalls 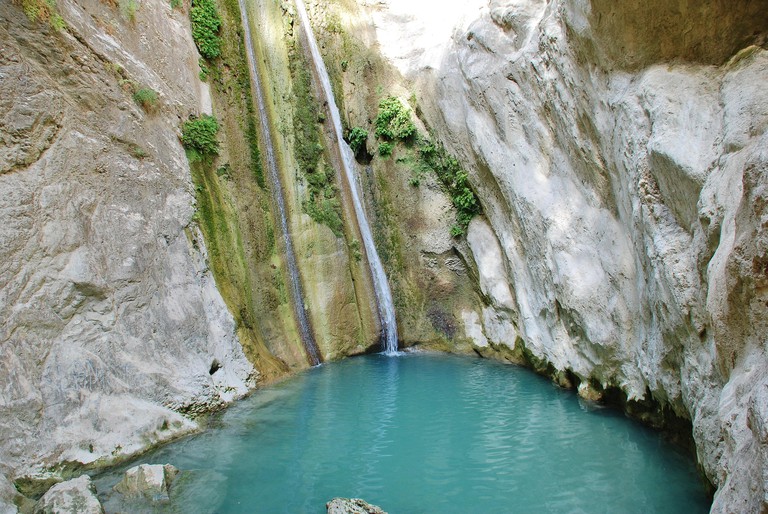 © David Fowler / Alamy
Overgrown with glossy ferns and hanging boughs, this slender waterfall and its shallow, pale-jade pool feel like a fairy’s dwelling. You’ll find them a 15-minute drive inland from the popular beach resort of Nidri. Take the short walk from the car park through a pretty trail of stone steps and citrus trees, and photograph the natural swimming pool from above; then, climb down the steps, and plunge in. There’s a small kiosk bar with shaded seating nearby, for a cold post-swim beer.

Drop by the Archaeological Museum in Lefkada Town

Museum
Facebook
Email
Twitter
Pinterest
Copy link
Share
With its chic, modern marina, chic shops and cosmopolitan restaurant scene, Lefkada Town is worth a day trip from your beachside base. While you’re here, stop by the Archaeological Museum, a small but perfectly formed culture fix, which you can enter for a couple of euros (£1.70). It shows treasures from the Middle Paleolithic era up until late Roman times, including a reconstructed ancient lyre, clay idols and stone and copper tools from excavations sites all over the island.

Venture out to Egremni Beach 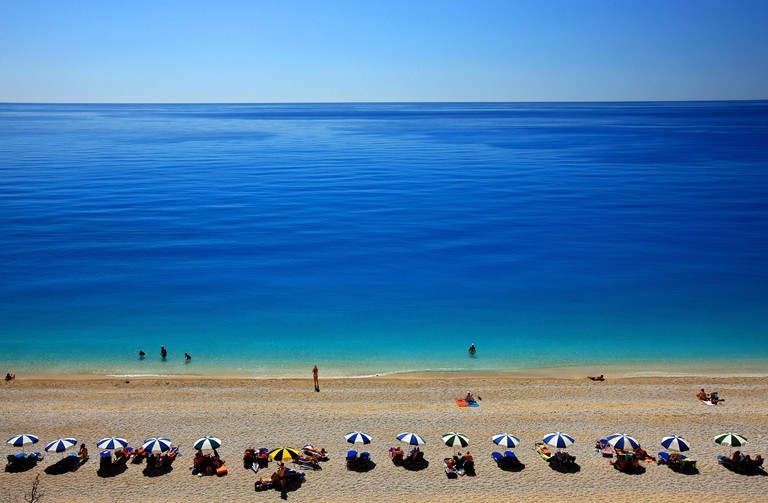 © Hercules Milas / Alamy
On the same wild, western peninsula as Porto Katsiki, this striking white shingle beach is set against electric blue waters – some of the most beautiful in Europe. As there are more than 300 steps to climb to get up and down, you’ll need a strong constitution, capable footwear and a bottle of water on hand. For anyone unable to make the steep climb, there’s a very civilised tourist boat that skims up the shore in style from Nidri or Vasiliki Beaches, showing a bit of the coastline en route.

Winery
Facebook
Email
Twitter
Pinterest
Copy link
Share
Though the Greeks have been making wine for thousands of years, their wine has only really hit the international mainstream in the past 10 years, with modern wineries around Athens and Santorini winning global awards for their bottles. Lefkada’s wine scene is still emerging, but the island is home to two distinct grape varieties: vertzami and vardea. Try them at this bijou winery, slightly inland from Poros in the south, which has free tastings and affordable bottles for sale.

Watch the sunset from Cape Lefkatas

The southwestern tip of the island pierces the Ionian Sea like a sword. At the blade’s point, jagged limestone cliffs are topped with thick forest and a little 19th-century lighthouse. The end-of-the-earth feel makes it a great spot from which to watch the sunset, turning the horizon red hot against an unobstructed, inky sea. It’s also the spot from where it is said the poet Sappho leapt to her death. Take the short walk from the car park to the lighthouse for the very best views. 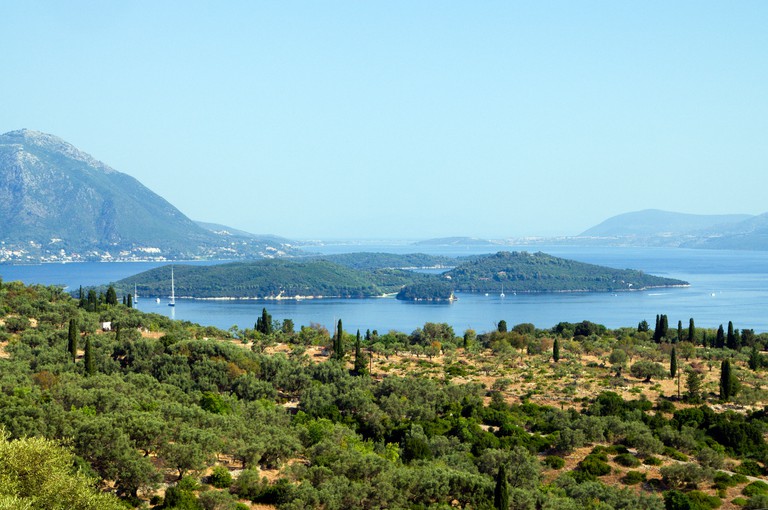 This tiny private island is an Ionian curiosity. Only 74 acres (30ha) in size, it was bought in the ’60s by shipping magnate Aristotle Onassis, who went on to marry Jackie ‘O’ Kennedy and throw impossibly lavish parties here for the world’s glitterati. It now has new owners, but you can still catch a day-trip boat from Nidri to paddle in the island’s jewel-bright shallows and spot the luxury villas and private marina hidden among verdant foliage and craggy coves.

To explore more of Greece, check out the best luxury hotels in Corfu and the best hotels in Astypalea. These are bookable with Culture Trip. During your stay, explore these must-see attractions in Athens, and relax on the best beaches nearby. Make sure you book a table at one of the best restaurants in Corfu to sample some delicious Greek cuisine.

This is an updated rewrite of an article by Ethel Dilouambaka.