EUROPE
/
GREECE
/
ZAKYNTHOS
/
Things to Do

The 11 Best Things to Do in Zakynthos, Greece 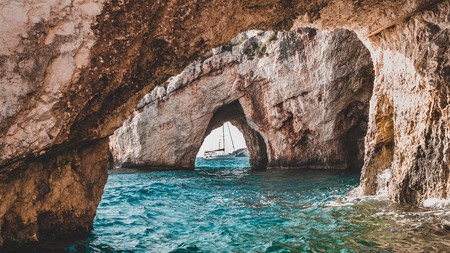 Zakynthos – also known as Zante – might be famed for its nightlife, but this lush island also has plenty to offer visitors looking for culture, nature and history.

The birthplace of revered poet Dionysios Solomos, the man who wrote Greece’s national anthem, Zakynthos offers no shortage of things to do. Home to a huge sea turtle population, this laid-back island surrounded by the deep blue Ionian Sea is awash with silky sand beaches, world-class diving sites and diverse architecture influenced by the Byzantines, Venetians, French and English. And since this was where the Subwing water-sports craze was created, you can expect plenty of high-adrenaline activities, too.

With some 12 spectacular dive sites beneath mirror-clear waters and the chance to meet unique marine fauna, ranging from endangered Mediterranean monk seals to massive sea turtles, it’s no wonder that Zakynthos is hailed as a diver’s paradise. If you want to see schools of barracudas, head for Marzelou reef; for bigger fish and tunnel formations, take a deeper dive at Elephant reef. Novice divers will be glad to know that they can hone their skills at Little Bay or Marathonisi.

The National Marine Park of Zakynthos, stretching from the Cape of Marathias to Gerakas Beach, is the best place to spot some of the island’s endangered wildlife. To get up close to turtles and monk seals in an eco-friendly way, book a day trip to Marathonisi, better known as Turtle Island, with the expert guides of Nefis Travel.

Insider tip: Make sure to know the “dos and don’ts” of visiting the turtles by reading up at the Exhibition Centre of the National Marine Park in Agios Ioannis. Top of the list: never disturb the turtles, or stay on the beach after sunset.

Rebuilt in the Venetian style after an earthquake destroyed many of the buildings in 1953, Zakynthos Town is a hotchpotch of elegant architecture, cool cafés and streets packed with boutique stores. Alexander Roma Street, for example, is crammed with jewellery stores and indie boutiques. After a little retail therapy on his namesake street, make sure you visit the 17th-century mansion of Alexander Roma (former president of the Greek parliament) near Solomos Square, which is packed with family portraits, works of art and period furniture.

Insider tip: if you’re here in August, don’t miss the festival dedicated to patron saint Dionysos, which coincides with a huge open-air flea market that lasts for over a week.

Get an adrenaline high

Zakynthos is the birthplace of the Subwing, the boat-towed underwater board invented by teen-genius Simon Sivertsen that lets you glide through the waves like a dolphin.

Apart from trying this super subwater sport at the Peligoni Club, adrenaline addicts can get their kicks base-jumping at hard-to-reach Navagio (aka Shipwreck) Beach, or flyboarding and parachuting above Banana Beach.

It might sound cheesy, but Zante’s cute little tourist train is a great way to sit back and see more of the island. After taking you out to see the main sights of Zakynthos Town, the red and yellow toy train plies various routes: to see ceramic makers in a local workshop, visit the laid-back Kalamaki beach resort or pay a visit to the city’s Venetian castle and a traditional perfume workshop.

Insider tip: look out for other little trains on the island, including the Trainaki leaving from Alykes Beach, which takes you to visit traditional mountain villages.

There’s a reason why turtles love Zakynthos’s beaches, but as long as you respect their space, those endless swathes of soft sand are great for humans, too. The pick of the crop is the iconic Navagio, or Shipwreck Beach – so called because of the rusted remains of the MV Panagiotis that washed up on the beach after a storm in the 1980s. You can reach this picturesque beach by taking a 30-minute boat ride from Agios Nikolaos, Zakynthos Town, Skinari or Porto Vromi.

For the best views over the harbour of Zakynthos Town and the distant beach-studded Vasiliki peninsula, hike the steep, winding road to Bohali Castle. Once you’ve wandered the ruined battlements of this 15th-century castle repaired by the Venetians, descend to nearby Bohali village, and order a beer and local meze snacks in one of the small cafés.

Insider tip: take water with you – it’s a thirsty climb, and there are no cafés at the top.

Zakynthos was dubbed Il Fiore di Levante (Flower of the East) by the Venetians, and even now if you visit one of the island’s parks, depending on the season, you’ll see brilliant carpets of wildflowers, or aroma-filled areas covered with wild herbs. The best of the bunch is Askos Stone Park, where you can wander out along wooded hiking trails and encounter wild animals, including endangered platonia deer.

Insider tip: call ahead and you might be able to take part in milking goats or another of the park’s activities.

Zakynthos’s picturesque coastline is dotted with limestone caves, but if there’s just one cluster of grottos you need to visit it has to be the Blue Caves – so called because of the sea’s breathtaking colour here. Only boats can reach these limestone caves near Cape Skinari, but many tours will visit on their way to Shipwreck Beach.

Insider tip: the best way to do it is to head out in one of the glass-bottom boats with the Potamitis brothers so that you can see every glittering detail, and try and get there before midday when the light is just right.

Escape the heat in cool museums

Birthplace of Greece’s national poet and boasting a rich ecosystem, Zakynthos has some great museums where you can escape the midday heat. In the village of Agia Marina, Helmi’s Natural History Museum is packed with rocks, fossils and stuffed animals representing the island’s wilder side. Poetry lovers, on the other hand, should make a beeline for the museum dedicated to local hero Solomos, who penned Greece’s national anthem in 1823. The museum is home to personal items belonging to the poet, but also a mausoleum containing his remains.

Insider tip: don’t miss a visit to the Museum of Zakynthos to see the model of the town as it was before that mega-earthquake hit in 1953.

Zakynthians have been producing world-class extra virgin olive oil for millennia – and the 2,000-year-old olive tree in the village of Exo Hora is living proof. Apart from health-giving oil, this food-loving island has plenty of local specialities that you should try, including sofigadoura, a kind of beef stew in a rich tomato sauce, and the egg-white and almond sweet treat mantolato.

Insider tip: if you want to learn (a lot) more about the local olive oil, head for Aristeon Ecological Olive Press, where you can try your hand at picking olives and even press your own oil during the autumn months.