The Best Things to Do in Santorini, Greece 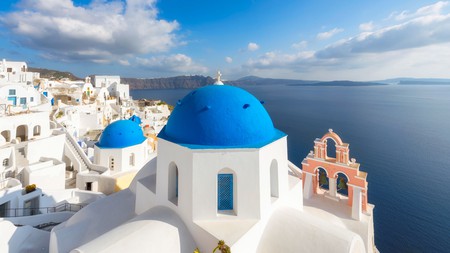 Swerve the crowds on this Cycladic island, where wine and sigh-worthy sunsets come as standard.

Santorini, also known as Thera, is one of the best-loved Greek islands. Currently shaped like a semicircle, Santorini was once spherical and called Strongili (meaning “round” in Greek), before a volcanic eruption broke it into smaller parts, about 3,600 years ago. Today, just above the volcano’s half-submerged, snapshot-summoning caldera, you’ll find a bustling Cycladic isle that looks like no other – laced with charming villages, black-sand beaches and panoramic sunsets. 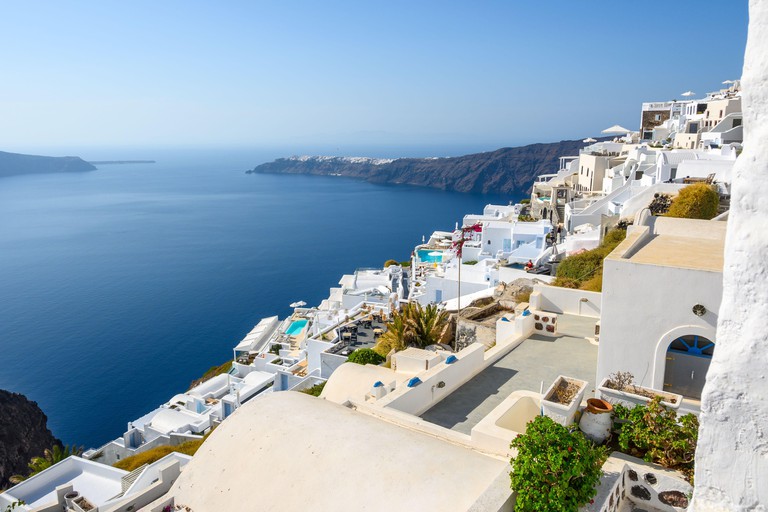 Following Santorini’s cobblestone pathways is the best way to discover its scenic settlements. Opt for walking instead of riding the lovely (but exhausted) donkeys. The hike along the rim of the caldera offers amazing views. Gaze at Oia’s white houses and domed churches, contrasting against the blue of the Aegean Sea, and take in the classic Cycladic beauty of Imerovigli, home to upscale bars, restaurants and boutique hotels. If you’re tired of walking, hop on a cable-car ride from Fira and swing above the volcano – low enough to almost feel the lava.

Watch the sunset in Oia 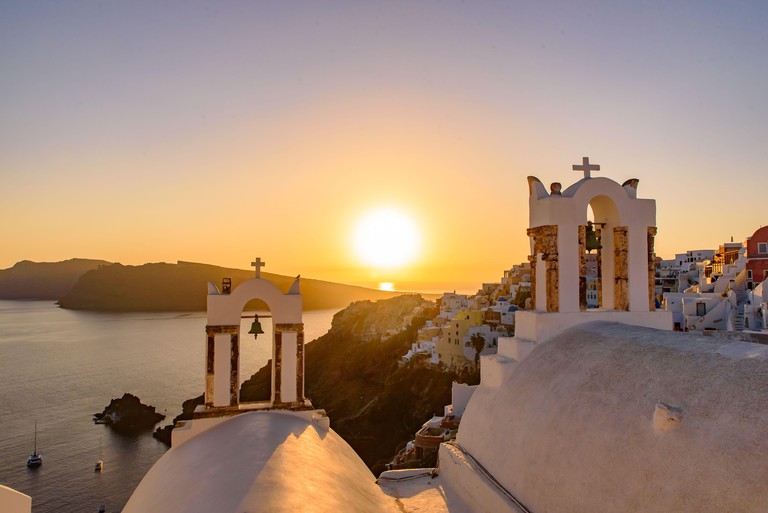 Even if you’re not one of the many hopeless romantics who flock to Santorini each year, the chances of remaining unmoved by the sight of the sun setting in Oia are slim. Sure, the cosmopolitan settlement may be the island’s most-visited town, but for good reason: its unrivalled sunset views. If you don’t mind crowds clapping as they watch the sun diving into the caldera, you might even find yourself in tears. You old softie. To skip the crowds, the sunset from Vlychada Beach, or the castle site in Pyrgos village, are just as enchanting. 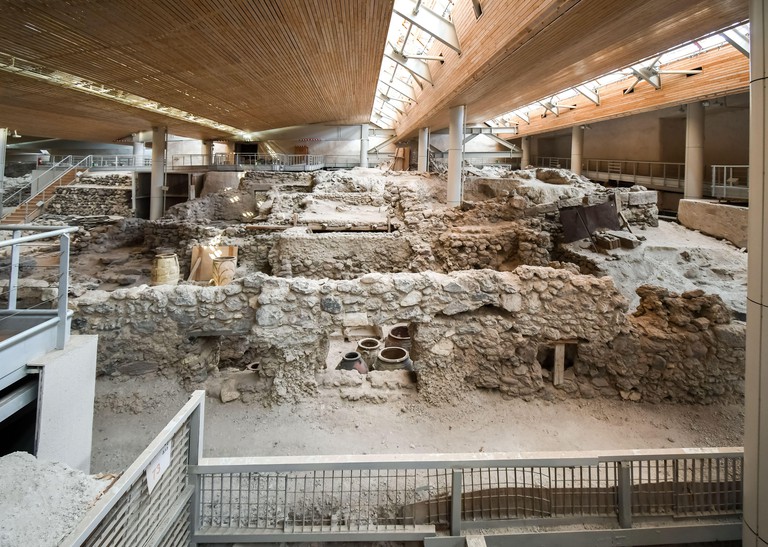 Inside the ancient bronze age Minoan ruins of Akrotiri on the island of Santorini Greece. | © Kirk Fisher / Alamy Stock Photo
Santorini brims with archaeological finds, especially in Akrotiri. The ancient settlement has been hit by earthquakes and a volcanic eruption in the 17th century, with the molten material ultimately preserving murals, artworks and relics in a village that’s very much worth exploring. Over on the east coast, on the Mesa Vouno mountain, you can also marvel at precious finds from the civilisation of ancient Thera. On this 365m (1,198ft) bluff, an entire Hellenic settlement is unveiled, complete with a theatre, cemeteries, markets, pagan temples, Christian churches and baths. 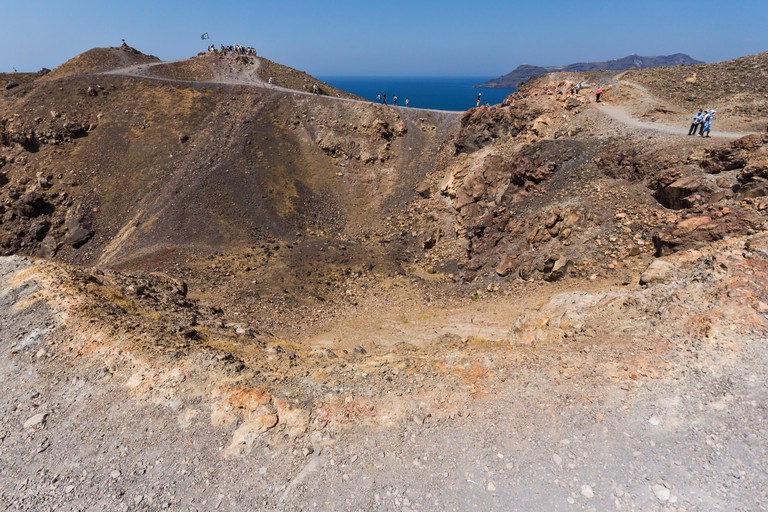 Just across the caldera cliff, the islets of Palea and Nea Kameni – once part of ancient orb-shaped Strongili – are living, breathing proof of the volcano that shaped Santorini and wiped out the Minoan civilisation thousands of years ago. Embark on a boat tour from Fira, and reach the heart of the volcano in Nea Kameni, where you will be so close to the crater that you can see the smoke and smell the sulphur. Other dormant craters exist all over Santorini and are constantly under surveillance by scientists. 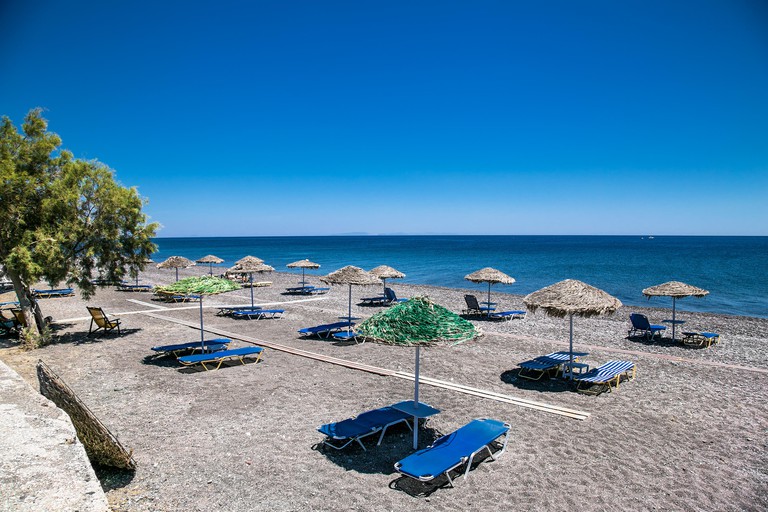 Sculpted by ashes and lava, Santorini’s beaches are among the wildest and most exotic in the Cyclades. Black sand and pebbles, pumice cliffs and rough caves are only some of their geological features. Whether you choose to swim in the crystal-clear waters of Monolithos Beach or the sulphur-filled hot springs of Palea Kameni, you’ll feel the presence of the volcano at every turn. 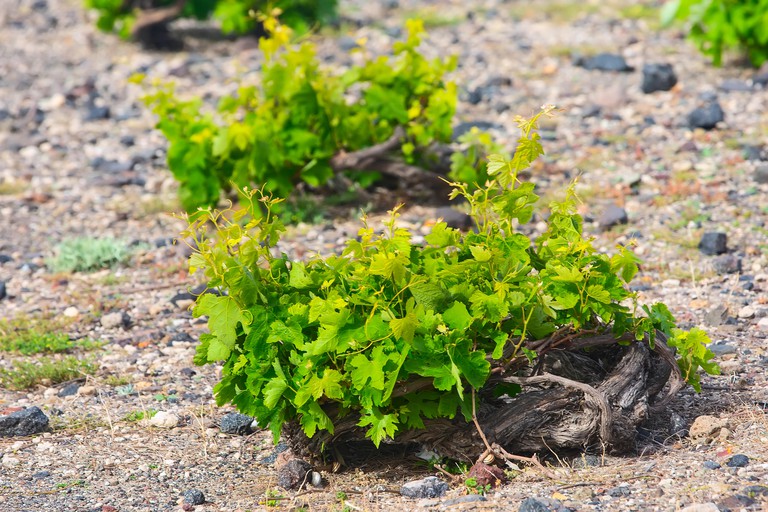 Thanks to its unique topography and climate, Santorini boasts a long tradition in viticulture. The Assyrtiko wine is the island’s main draw, followed by Athiri and Aidani – all deriving from white-grape varietals. A blend of the three – known as the bronze-coloured, sweet Vinsanto – is produced only here. Try it at a traditional winery or a bigger establishment like Santo Wines and Venetsanos. Alternatively, book a wine tour and drink in the experience to the fullest.