The Best Things to Do in Hydra, Greece 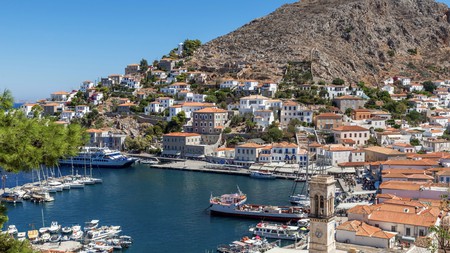 Fancy galloping through the waves on a horse, snorkelling through clear waters or trekking up a mountain for four hours? Hydra, about two hours’ journey from Greece’s capital, Athens, is your island. Here’s our pick of things to do on Hydra.

Hydra is just a two-hour ferry ride from Greece’s capital Athens and while it’s popular, you’ll find it a lot more serene than the mainland city. Cars are banned on this Greek island and instead, walkers, boats and even donkeys rein supreme. Narrow alleyways and stone mansions lend the place an old-world feel, which is on full display at Hydra’s variety of museums: the Byzantine Museum, the Historical Archive Museum and the National Historical Museum, to name a few. And, of course, the beaches are as gorgeous as any Greek hotspot. 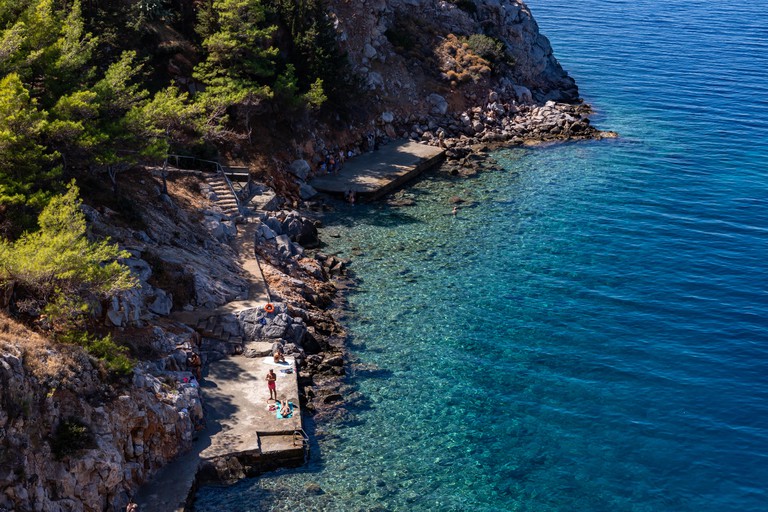 © Lisandro Trarbach / Alamy Stock Photo
Just 100m (330ft) from Hydra’s main town, known as Hydra Port, Avlaki Beach provides a bit of a respite from the slightly bigger crowds of Spilia Beach. This choice might not be as ideal for small children or people with mobility issues, since you’ll have to go down a steep flight of stairs to get to the sheltered cove. But the private, undiscovered feel of the small beach and bathing platform is worth it – as is the deep, clear water.

Bisti Beach is on the far side of the island, almost 10km (6mi) from the main town. It’s accessible by water taxi, which runs on a set schedule, or you can catch the put-put from in front of the clock tower. The shoreline, which gently slopes into shallow water, makes this beach a great choice for families with kids – and as an added bonus, it’s well-known for its snorkelling.

Hiking Trail
Facebook
Email
Twitter
Pinterest
Copy link
Share
Dream of seeing Greece by bumbling horseback? Now’s your chance, with Harriet’s Hydra Horses, a tour group you can use to book gorgeous treks to see the beaches, chapels and monasteries, the countryside and more. If you’re feeling especially daring (and need to cool off), don’t miss the bareback ride in the sea. The organisation boasts year-round availability and a trek for every age and ability level. For the real Harriet’s experience, make sure to call or text ahead – the trekking company is not affiliated with the horses found at the harbour. 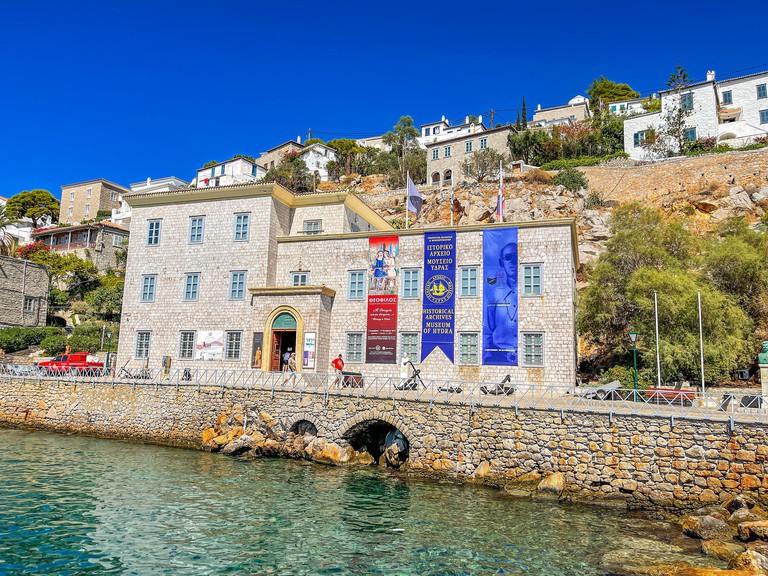 © PitK / Alamy Stock Photo
The best place to learn more about the rich history of this island is through the Museum of Hydra’s Historical Archive, which boasts about 20,000 original manuscripts, documents and books that will give you valuable insight into Grecian culture and tradition. Moving into the museum itself, you’ll find traditional dresses, weapons from multiple wars and even the figureheads of ships. This museum is right on the water, so make sure to catch the view after you’re done. 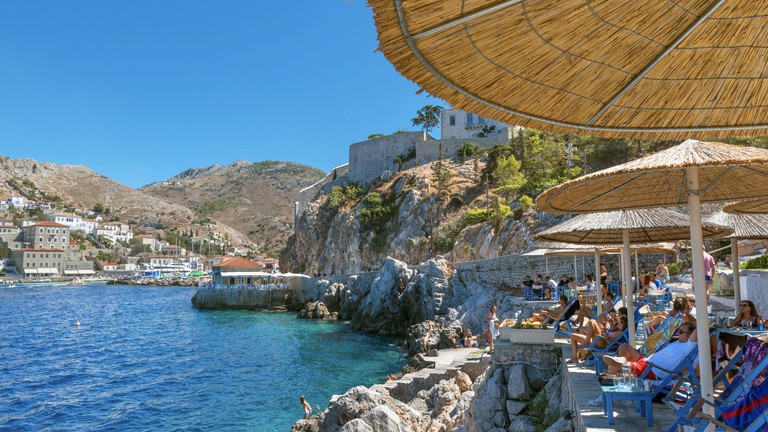 © Ian Dagnall / Alamy Stock Photo
Just five minutes’ walk from the port, Spilia Beach Bar is, true to its name, right on the beach, making it the perfect perch for a pre- or post-dip drink. Light and casual Mediterranean fare is served on a large stone patio, complete with massive straw umbrellas. Steps lead right down to the water, or you can watch fancy ships move out to sea.

Museum, Historical Landmark
Facebook
Email
Twitter
Pinterest
Copy link
Share
Originally a mansion occupied by a wealthy and powerful family during the Greek War of Independence, this stately yellow building was donated by the family to become the National Historical Museum. It still retains much of its splendour, and its exhibits fit with the theme of each room. Its contents include paintings by the Greek artists Periklis and Konstantinos Byzantios, as well as heirlooms belonging to the original family. 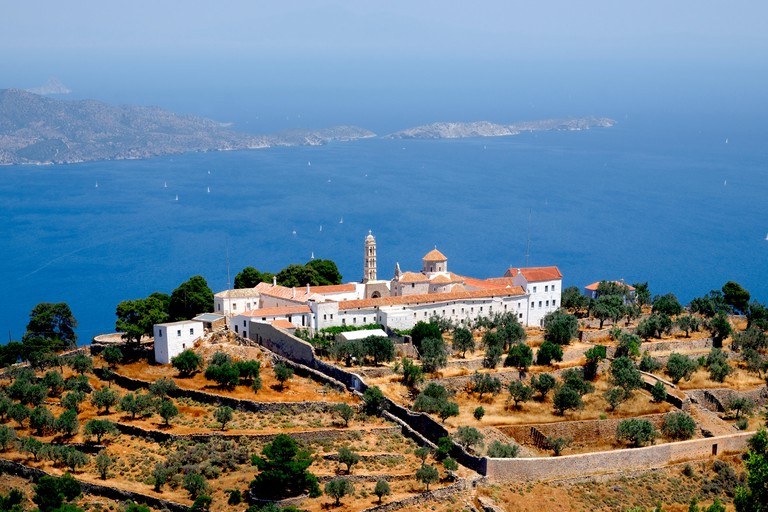 © Photo42 / Alamy Stock Photo
The Prophet Elias Monastery is 500m (1,640ft) above sea level and well worth the two-hour trek from the city centre. Established in 1813 by 13 monks, this is the only male monastery on the island and was actively involved in the Greek Revolution of 1821. If you would like to see the Agia Efpraxia nunnery as well, take the path for the nunnery when you reach a junction near the top – it’s a small detour.

Mount Eros is on the way to the Prophet Elias Monastery, so you can easily package them into one trip. The 20km (12mi) hike from the Hydra city centre will take about four hours – set out earlier rather than later in the day to avoid Greece’s most oppressive afternoon heat. Take the path to the monastery until you spot the sign and don’t forget to pause and enjoy the view, including of the wildflowers, along the way.

Not sure where to stay? Book one of the best hotels in Hydra now, curated for you by Culture Trip. Enchanted by the Grecian landscape? For more, take a trip to not-too-far-away Athens. Stay in one the best hotels in the capital, visit some must-see historical sites or chill out on the best beaches nearby, and end the day by sampling the best of the Athenian cuisine.