The 11 Best Things to Do in Crete, Greece 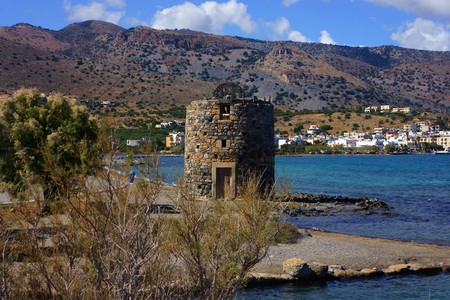 From exploring the Knossos Palace to hiking the Samariá Gorge and swimming in crystal waters, Crete has no shortage of activities to help visitors fill their itinerary. Here are the best things to do on the island.

It takes seven hours to drive from the west to the east of Greece’s megalo nisi (big island), but since the entire route is dotted with idyllic beaches, world-class archaeological sites, hip wineries and mind-boggling museums, don’t expect to do it all in one go. Here’s what you want to see and do on – and off – the main trail on Crete. 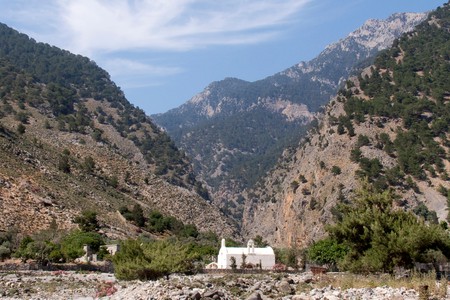 The Minoan civilisation flourished on Crete from around 3000 BC to 1100 BC, and there are plenty of wonderfully evocative sites that recreate the life and times of the island’s art-loving inhabitants. Pick of the crop is the Ancient Eleutherna site and museum, where you can gawp in awe at 7th century BC burial grounds and learn all about Minoan funeral rites.

Another must-visit is Knossos, the largest Bronze Age archaeological site on Crete, located just south of Heraklion. The palace complex was the seat of mythical King Minos and the mythical Minotaur.

Eleutherna is only 10 miles (16 kilometres) from the cave where legend has it Greek god Zeus was born, so make sure you hike to this breathtaking site. 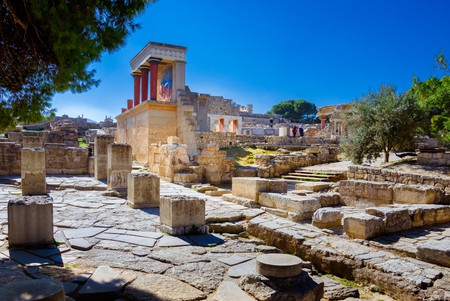 For really off the tourist path supping, drive high into the mountains to Vyzari for crisp courgette fritters (kolokithokeftedes) and other homemade goodies at I Strofi tis Gefseis.

Chill out at the beach

From the sandy stretches surrounding Rethymno, to golden swathes near Chania, Crete is a beach paradise. Best of the lot (and undoubtedly the most Instagrammable), has to be Elafonisi’s pristine pink sands and sweeping dunes that are separated from the mainland by a shallow lagoon.

At the other end of the island, beach bums will adore Vai, a sandy stretch surrounded by Europe’s largest natural palm forest – made famous when it served as the filming location for the “Taste of Paradise” Bounty ad in the 1970s.

If you love your sun and sand with a side of music, head for Matala’s horseshoe bay for the (free) rock, folk and jazz festival in June. 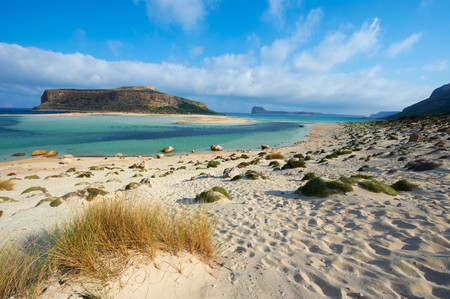 Chania’s war museum, with its personal accounts and artefacts from the Battle of Crete (including plenty of World War II tanks and guns), is also guaranteed to keep you engaged.

“Do not miss my favourite museum, it’s the one dedicated to our literary hero Nikos Katzantakis in Myrtia – he wrote Zorba The Greek amongst others – there are lots of rare photos and souvenirs from his travels,” says local café owner Manos Zervakis. 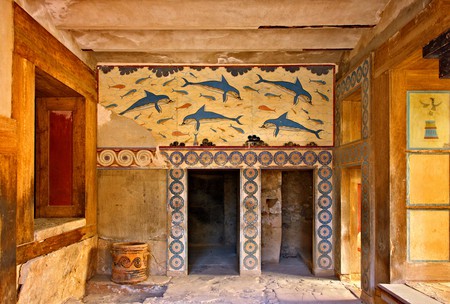 Hang out in a hip hotel

Recent years have seen an explosion of hip new hotel openings in Crete. If you’re seeking a boho vibe, it has to be Syntopia’s stylish poolside suites near Rethymno, but if you’re lusting after a chic feel choose a private pool suite at Abaton Island or check into an overwater bungalow at Stella Island, both near the bustling resort of Hersonissos.

If you fancy a more authentic alternative, check into Kapsaliana Village, a cluster of traditional stone-built village houses with its own restaurant serving organic local cuisine.

Visit the island of Spinalonga

Spinalonga, the leper island of Victoria Hislop’s best-selling novel, is just a short ride from the shop-lined streets of Agios Nikolaos with its ‘bottomless’ Voulismeni Lake. Head for neighbouring Elounda to hop on one of the traditional wooden boats that ply the route back and forth to this barren island in pretty Mirabello Bay, where Greece’s lepers lived in quarantine until the 1950s.

To get the best out of the trip – and hear lots of anecdotes – make sure you hire one of the professional guides: they are waiting when you get off the boat. 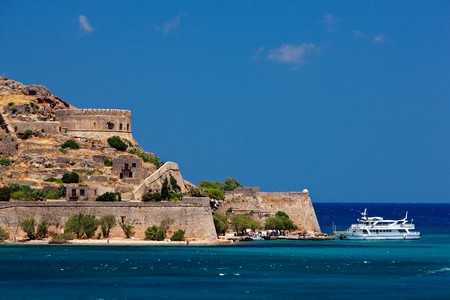 For top-notch adrenalin adventure pull on rock-sturdy hiking boots and hit the trail leading through Crete’s famous Samariá gorge. There’s a high-flung viewing platform, where you might spot kri-kri goats and huge griffon vultures, before descending into the 16km (10mi) long gorge, which only measures three metres (10 feet) across at its narrowest point.

For an off-the-beaten-track alternative, hike the cave-studded cliffs of the George of the Dead in East Crete’s Zakros.

“If you don’t want to do the whole Samariá hike – it takes five hours – you can take a boat to Agia Roumeli and just hike through the bottom end of the gorge,” says local boat owner Giorgos Stratakis. 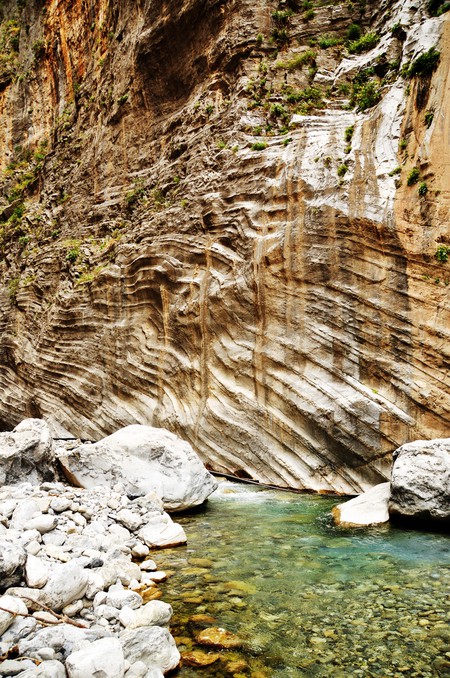 Hop on a boat

There are plenty of ferries and small boats puttering across Crete’s mirror-clear turquoise waters, but one of the best organised trips is the half-day excursion to Balos beach, known locally as the ‘Cretan Caribbean’ because of its pale pink sands and warm, shallow waters.

For a lesser-known alternative, head east to the tiny resort of Makrigialos and take a day trip to Natura 2000-protected Chryssi Island with its sweet-scented sea-daffodil-studded dunes and ancient Minoan sites.

Drinks and snacks on Chryssi Island are expensive, so if you’re on a tight budget bring some with you. 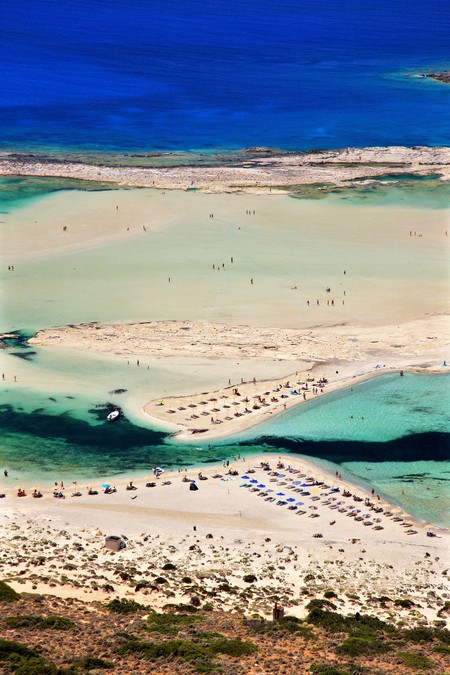 Crete’s capital Heraklion is loud and lively, but if you hanker for something more traditional head for Rethymno with its pretty port lined with cool cafés, fortress museum, and labyrinth of shopping streets. Another chic city with a retro feel, Chania’s Venetian Harbour buzzes with cool bars and happening cafés, while shop-lined backstreets are home to restaurants and clubs.

If you really want to chill far from the tourist hordes, head for the port town of Sitia and hang out in cafés near the port, or climb the ladder-like steps behind the harbour. 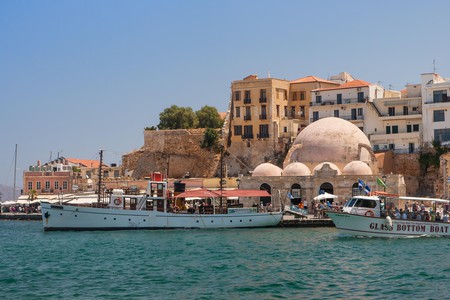 Head out on safari

You won’t see tigers or elephants on a Cretan safari, but exploring wild landscapes, following dusty off-piste trails and swimming in isolated, hard-to-reach coves is almost as thrilling.

Safaris in the west of the island explore traditional villages high in the White Mountains or discover hidden coves near stunning beaches such as Preveli, while eastern safaris travel to hotspots including the windmill-studded Lasithi plateau and rugged Ha Gorge.

Bring a change of clothes, plenty of sunscreen and a good hat for these four-wheel drive trips along dusty tracks. 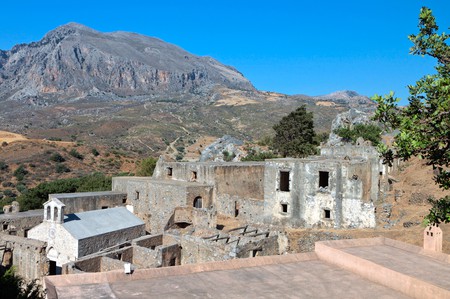 Preveli, located in southern Crete, is notable both for its monastery (Agios Ioannis Prodromos) and its beach | © PANAGIOTIS KARAPANAGIOTIS / Alamy Stock Photo

Go wild at a Cretan glendi

Cretan music is the island’s wild heart and soul, and you can’t know Crete unless you’ve been to a glendi (festival) and heard lyra (a pear-shaped, three-stringed instrument, played with a bow) and laouto (a long-necked instrument related to the lute).

In Heraklion make a beeline for Nyn Kai Aei, a club-like venue where some of Crete’s biggest music stars come to strum. For an authentic dose of local life try Veggera in the seaside town of Ierapetra, where you’ll sit on long wooden benches and sip raki as you listen.