Dramatic Landscapes and Decadent Desserts: The Best Things to Do in Corfu, Greece 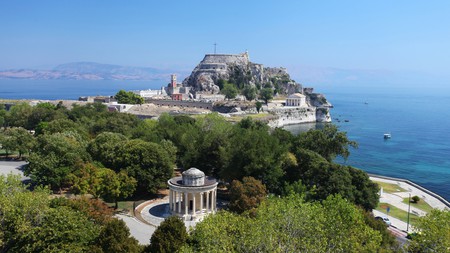 The Greek island of Corfu has a number of architectural and historical treasures to discover. | © Dan Breckwoldt / Alamy Stock Photo

From the rugged cliffs of its northern shores to the architectural diversity of its capital, Corfu has a wealth of history, natural beauty and cultural activities to offer visitors.

The Ionian island of Corfu, in northwestern Greece, is known for its stunning beaches. But with a rich culture reflecting periods spent under Venetian, French and British rule, Corfu is far more than just a beach destination. Discover the pastel-hued architecture of its capital, Corfu Town, with its imposing Venetian fortresses; the island’s distinctive cuisine; and a more contemporary side to local culture, centring on modern dance. Culture Trip spoke to three Athenians who return to Corfu time and time again for their tips on how to make the most of a trip to Corfu. 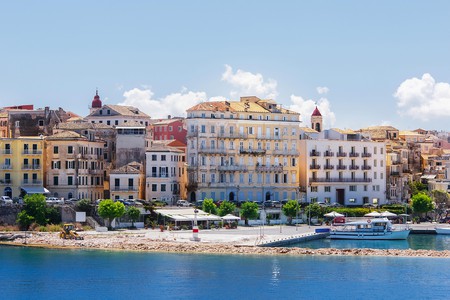 Soak in the diverse architecture of Old Town

The first thing Ioanna Paggalia (an Athens-based advertising photographer) does when she sets foot on her favourite island is to take her customary stroll through the streets of Old Town. “The labyrinthine alleys are dotted with small shops, cafés and restaurants, and unexpectedly open up to cobbled piazzas,” she says. “The funny thing is, even though it’s a familiar sight, I still find myself taking pictures of the hanging laundry and flowerpot-clad balconies.”

UNESCO certainly had valid reasons to declare Corfu’s historic centre a World Heritage site. Though mostly Venetian in character, both French and British additions have brought a raffish grandeur to the island’s capital. The buildings, churches, squares and gardens of Old Town are testaments to its storied past. Keep your eyes peeled for these architectural gems: Saint Spyridon Church, the Cathedral of St James and St Christopher, the Town Hall, Ionian Parliament and Ionian Academy. Make sure to pass through the charming Campiello neighbourhood before finding your way back to Spianada Square – the biggest town square in all of Greece. Then head westward toward the elegant arcaded arches of the Liston, which runs along one side of the Spianada. This Rue de Rivoli lookalike was constructed during the second bout of French rule (1907-14) and boasts a line-up of the island’s finest cafés offering front-row seats for some serious people watching. 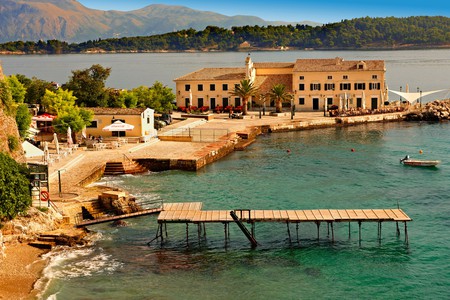 Get a feel for Corfu’s history of conquest and valour

Palaio Frourio (the Old Fortress) has had its share of sieges over the centuries, but things have been quiet since 1799, save the hordes of visitors. The grandiose Byzantine structure dating back to the sixth century was reconstructed by the Venetians in the 14th century to protect against repeated Ottoman attacks. The bastions were extended and the Contrafossa (moat) was formed, creating an artificial islet. Today Palio Frourio is a magnificent open-air museum, housing a line-up of interesting structures: the old British Barracks (Porta Soprana), the Savorgnan Bastion, Tower of the Sea, Tower of the Land, a British-built church resembling a Doric temple and the music department of Ionian University. Only parts of its premises are open to visitors, but it is well worth walking around the fortress and undertaking the gentle climb up to the lighthouse for superb views of the sea and Old Town. The general fortress area is free but there’s an entrance fee for the museum.

Pay a visit to Corfu’s very own Acropolis

Do not miss Angelokastro (the Castle of Angels), a Byzantine fortress located on the highest peak of Corfu’s shoreline (300m [984ft] above sea level). Go before midday, as it’s a steep 15-minute walk up a rocky path, best done before the heat of the sun fully kicks in. You’ll be richly rewarded once you’ve got your breath back and your eyes take in the panoramic view. Tickets are only €2 (£1.70) and there’s also a café at the entrance. The easiest way to get there is from Paleokastritsa village – just follow the signs.

Aline Stavritis, an Athenian lawyer, says her favourite area on the island is the northern coast. Northern Corfu’s lusher terrain, with its stunningly sculpted cliffs that plunge down to sandy beaches, tranquil bays and mystical coves, is famed for its dramatic landscapes.

From Paleokastritsa, Stavritis suggests you make your way further north toward one of two beaches (both about a 40-minute drive): Arillas Beach or Porto Timoni Beach. Arillas Beach is a tranquil, sandy spot where you can also enjoy a relaxed lunch at one of the tavernas nearby. There are sunbeds available and there’s rarely a crowd. “This is my go-to spot for a quiet day at the beach where I know I can get a quality lunch as well,” says Stavritis.

For the more adventurous beach seeker, walk down to Porto Timoni Beach after parking at the village of the same name. Blessed with beautiful crystal-clear waters, this beach is a little more of a challenge to get to, and you’ll need walking shoes for the rocky path down to the bay (along with water and a snack). If you decide to head toward the northeastern coast, Stavritis suggests the gorgeous beaches of Barbati, Nissaki, Kassiopi or Kerasia, and lunch at Le Grand Balcon in Pyrgi, which is less than a 10-minute drive from Barbati and Nissaki beaches. Its name is certainly fitting – the view from the balcony is magnificent. 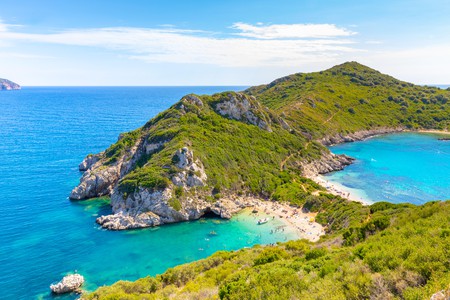 Another 20-minute drive north from Arillas Beach are two must-visit sites for anyone (particularly photographers) seeking out dramatic landscapes: the very popular Canal d’Amour (Channel of Love) and the more impressive, but slightly more difficult to get to, Cape Drastis. Both spots boast striking landscapes of weather-beaten rock formations. Warning: be careful who you go to Canal d’Amour with; legend has it that you’ll fall in love and be destined to spend the rest of your years together. A nine-minute drive from Canal d’Amour (or seven minutes from Cape Dratsis) will take you to 7th Heaven, a café with another mind-boggling view.

If dozing on a sunbed is not your idea of a day at the beach, then the action-loving enthusiast in you will have to head on over to one of the water sports venues that are scattered across the island. Check out the array of beginner and more advanced lessons from waterskiing to adrenaline tubes up north at Sidari Watersports. Paraglide 50m (164ft) above the sea at Corcyra Beach on the east coast, and try new wakeboard manoeuvres at Barbati Watersports on the northeastern coast. 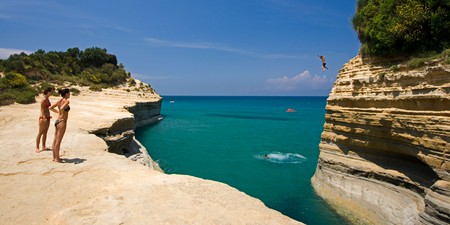 Garage Performing Arts Centre has been keeping Corfu dancing since 2012. Set up in a converted garage by the well-established dancer/choreographer duo Mary and Evangelia Rantou, this 60-seat venue plays host to both Greek and foreign dance productions, seminars and lectures but also offers modern dance and yoga classes. A 20-minute walk from Old Town, the space’s industrial aesthetic adds a modern, contrasting edge to the outskirts of the island’s capital.

Well-known Athenian cake and biscuit connoisseur Evita Papacharalambous says Corfu’s retro classics are a must-try. Guaranteed first-rate local ingredients (Corfu’s butter is known to be outstanding) can be found at the Periklis Alexis dairy store. The store has been whipping up decadent dairy concoctions since the 1950s, with perennial sweet hits including vanilla cream pudding, galaktoboureko (semolina custard in syrup-infused filo) and creamy rice pudding. Another old-school pit stop is patisserie Papagiorgis (running for over over 90 years), where you’ll be swooning over the house-made ice cream, mille-feuille (custard slice) and traditional Easter sweet bread, corfiot fogatsa. At Lazaris distillery and artisanal sweets, try the sikomaida (a pepper- and ouzo-infused dried fig and grape delicacy) and the island’s own bittersweet kumquat preserve.