The Best Things to Do for Free in Thessaloniki, Greece 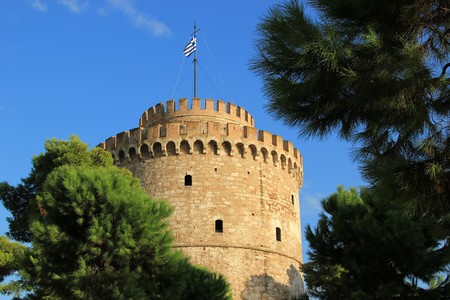 Are you visiting Thessaloniki? Great! This dynamic city has a lot to offer, whether you are looking for great eats, vibrant art or age-old monuments. And even if your budget is restricted, there are plenty of things to do in and around the city without having to spend too much. Here are the best things to do for free in Thessaloniki, Greece.

Thessaloniki boasts a beautiful coastal pedestrian area with the backdrop of Thermaikos Gulf, which spreads from the port to the Concert Hall. Whether you feel like taking a break from the city pleasures or opt for a relaxing picnic in a lovely spot, there are plenty of places to enjoy. Besides the seaside parks, Thessaloniki also borders the Seih Sou Forest, a green oasis located next to the Agios Pavlos district. Once you’ve decided where you want to go, you can grab some delicious sandwiches or a basket of tasty delicacies from one of the markets in town and head to your picnic spot. 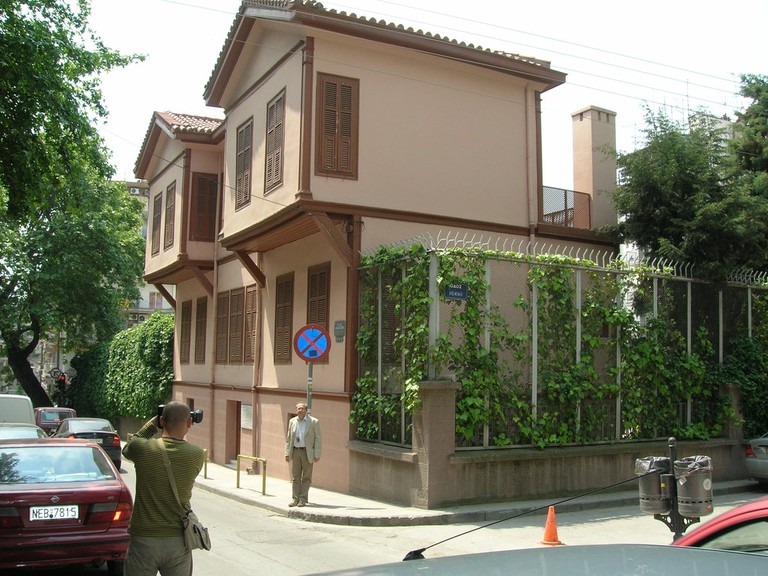 Discover a fascinating page of history with a visit to the Ataturk Museum, which is housed in the home where the founder of modern Turkey, Mustafa Kemal Ataturk, was born, in the suburb of Thessaloniki. The house, given to the Turkish State, includes most of the original furniture. The highlight of the museum is the room where Ataturk was born, located on the second floor.

It is not for nothing that Thessaloniki is known as the gastronomic capital of Greece. In fact, the city owes it rich and vibrant food scene to its mixed cultural heritage, the variety of local delicacies and food products and the innovative minds of its culinary stakeholders. To get a glimpse of this, visit one of its three must-see markets in the city, such as the Modiano and Kapani markets, as well as the market in Athonos Square. Home to a variety of vendors specializing in fresh produce, meat and fish, nuts, spices and other treats, these are the center of the wonderful culinary world of Greece’s second city. 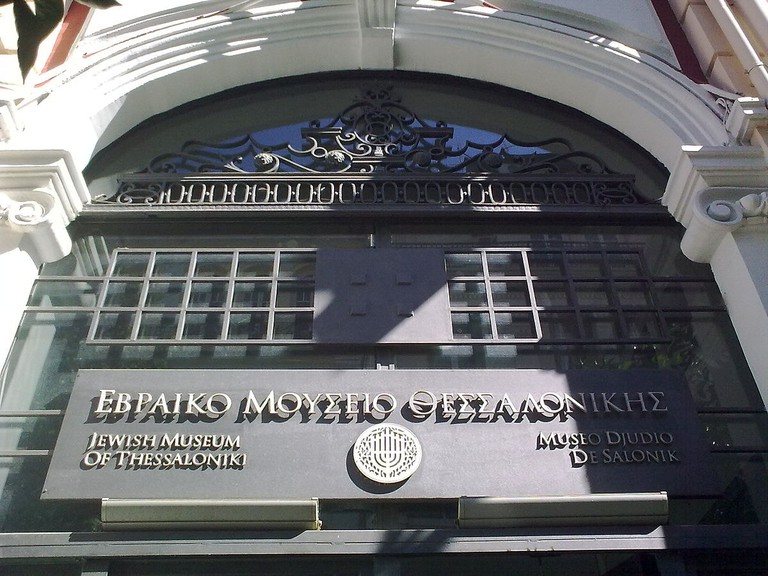 Sign at the entrance of the Jewish Museum of Thessaloniki | © Sam. SALTIEL / WikiCommons

Few people know that Thessaloniki was home to a large population of Jews in the late 19th and early 20th centuries, earning it the name of the City of Ghosts. Get acquainted with this forgotten past at the Jewish Museum of Thessaloniki, which includes a wide collection of historical artifacts and photographic exhibitions. As one of the most important places devoted to a major ethnic community that shaped the city’s modern identity, the Jewish Museum of Thessaloniki attracts visitors from across the world.

Since walking is the best way to explore Thessaloniki, have a go at one of the many free walking tours operating in the city. Just make sure to have a good pair of walking shoes and have a look at the free tours available. 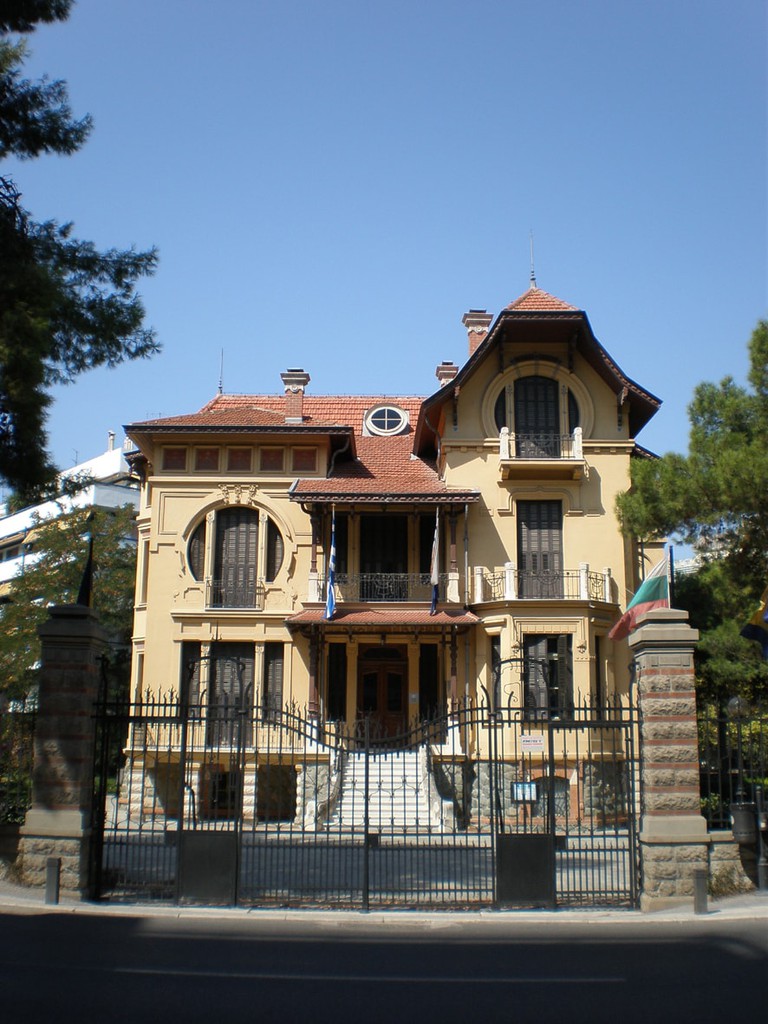 Home to over 1,000 works of art, the Municipal Art Gallery in Thessaloniki is one of the free attractions of the city. The gallery is housed in the stunning Casa Bianca—an example of Eclecticism architecture on Vassilissis Olgas Avenue—is split into several collections of works by foreign and Greek artists and organizes regular exhibitions of Greek talent.

Wander the narrow streets in the Old Town

One of the most popular experiences in Thessaloniki is totally free—unless you decide to have a meal or a drink at one of the many cafés and tavernas in the area. Thessaloniki’s Ano Poli (or Upper Town) is a little jewel of an area that escaped the 1917 Great Fire intact. As such, it boasts old houses with lush gardens and courtyards. While some constructions are in ruin, the area certainly deserves a visit. 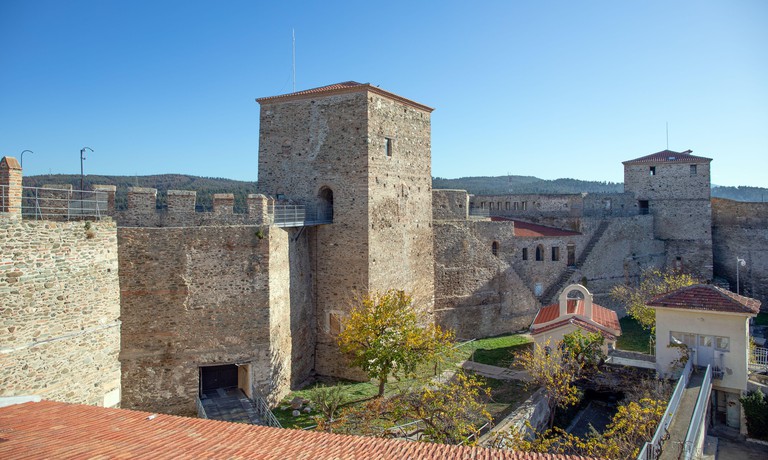 The Yedi Kule fortress, also known as the Heptapyrgion, or Eptapyrgio, is a true vestige of the Byzantine and Ottoman past in Thessaloniki. Part of the former acropolis complex of the city, it served as the garrison for the city guards and was converted into a prison, in use until 1989.

Create a personalized tour of the city’s top art galleries

Are you into art? Then you are in luck as Thessaloniki boasts a collection of impressive art galleries covering a vast area of art genres and styles. While you may have to spend a small sum for an organized art tour, you can definitely take the initiative to create your own art excursion. Take inspiration from our roundup of the top galleries in town and explore the fascinating art scene of Thessaloniki.

Inside the catacomb of Agios Dimitrios Church, Thessaloniki | © dimitrisvetsikas1969 / Pixabay

Dedicated to the patron of the city, the Church of Agios Dimitrios is one of the largest churches in Greece. A fine example of late Byzantine architecture, the church became a mosque under Ottoman occupation, and several of its mosaics and murals were destroyed. Agios Dimitrios is known for its blend of architectural styles, but probably the most striking feature is the underground crypt that has been preserved throughout the years. The church was rediscovered after the 1917 Great Fire and restored in 1988. Tradition has it that Saint Dimitrios was imprisoned there and died in 303 A.D. The crypt is thought to be part of a larger network of underground tunnels extending over the whole city.