The Best Running Routes in Athens

The Best Running Routes in Athens

Where to run in Athens | © hello_vihgnesh / Pixabay
Running is inexpensive and one of the easiest workouts you can do when travelling. Kill two birds with one stone and combine it with some exploring and sightseeing while in the Greek capital. So grab a pair of sneakers and workout clothes and follow us as we take you around the best running routes in Athens, Greece.

Building
The National Gardens entrance, by Syntagma | © Graham C99 / Flickr
Located next to the Parliament Building, the National Gardens is an excellent place for you to keep up with your running routine while visiting Athens. You will find lots of trees offering much-needed shade during the summer months and winding paths dotted with water fountains where you can quench your thirst. Next to the gardens is the Zappeion, which also has a green area where you can run on asphalt paths.
More Info
Open In Google Maps
1 Leoforos Vasilisis Amalias, Athina, 105 57, Greece
+302107215019
Visit website

Stadium, Architectural Landmark, Historical Landmark
The Panathenaic Stadium hosted the first Olympiad | © Thomas Gravanis / Culture Trip
Book Now
The beautiful marble stadium in Pangrati, located behind the National Gardens, may be another landmark to visit in Athens, but it also has a horseshoe-shaped path on the top of the stadium that is open to joggers. Offering breathtaking views of Athens and the Acropolis, the pathway’s entrance sits on Archimidous Street.
More Info
Open In Google Maps
Leoforos Vasileos Konstantinou, Athina, 116 35, Greece
+302107522984
Visit website

Undeniably one of the more scenic running routes that you will find in Athens is Dionysiou Aeropagitou, the pedestrian street going around the Acropolis all the way to Thisseio metro station. You can even extend your workout and run along the metro tracks on Adrianou until Monastiraki and then circle back. Of course, during peak season, the street becomes crowded easily, so your best bet is to run early in the morning or late evening. Feel like pushing yourself? Combine a lap around the National Gardens before crossing the street to run on Areopagitou. 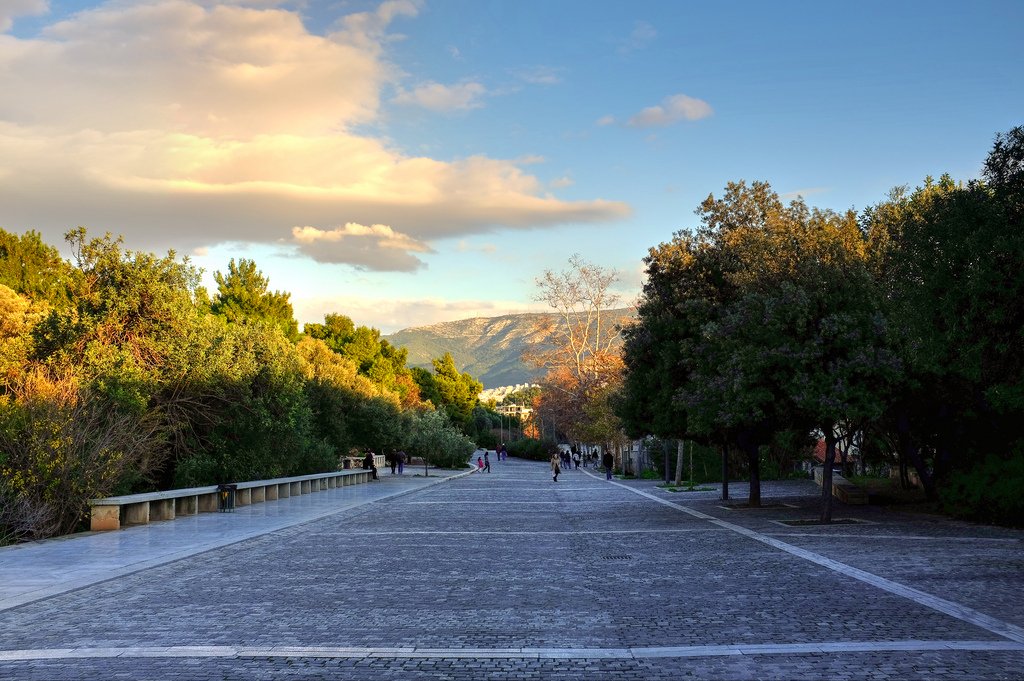 Dionysiou Areopagitou (near the entrance to Acropolis) | © Min Zhou / Flickr

Located off the Areopagitou pedestrian road, Filopappou Hill is also an excellent running spot. Lined with trees, the routes crossing the hill include marble-paved paths (lit at night) and dirt trails. There is also a water fountain by The Pnyx, where you can catch a breath and enjoy an uninterrupted view of the majestic Acropolis.

Another hill you can run on if you want something a bit more challenging is Lycabettus Hill, which features a series of trails and offers spectacular views over the city and the sea. Try to visit it in the morning as this locale is not well lit at night. The road circling the base of the hill, which is three kilometres (1.9 miles) long, is also a sought-after location with local runners, but unless you know how to handle heavy traffic, it is best if you to stick to the hill itself. 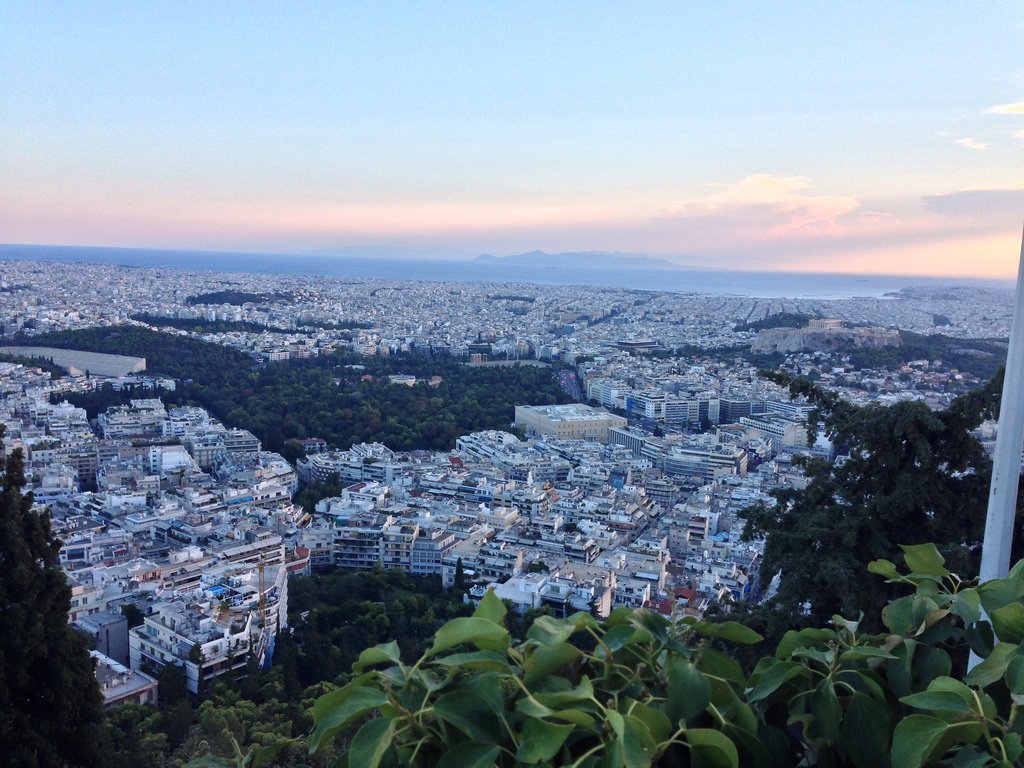 Park
The modern complex of the Stavros Niarchos Foundation boasts a vast park that is ideal for a run or jog. Take advantage of the park’s allées and paths and create yourself a multi-terrain route inside the green space. If you are staying in the areas of Tavros and Kallithea or even Paleo Faliro, you should definitely give it a try.
More Info
Open In Google Maps
364 Leoforos Andrea Siggrou, Kallithea, 176 74, Greece
+302168091000
Visit website

For those staying by the Athenian Riviera, the wide promenade that sits along Poseidonos Avenue and the tram is an ideal destination for a run and features a refreshing sea breeze. The summer months may mean there is a lot of foot traffic, but you should still be able to get in a good workout. With a distance of approximatively 16 kilometres (10 miles) from Kallithea to Glyfada, the promenade is one of the best and safe running routes you will find in the city.

Stadium, Gym
OAKA Olympic Stadium, Athens, Greece | © Tilemahos Efthimiadis / Flickr
While the 2004 Olympic Games complex in Marousi may be partially abandoned, it is still open to visitors, skaters and joggers. The peripheral road around the complex, which starts at Eirini metro station and passes along the Golden Mall before heading back to the station is perfect for running, as it is quite wide. However, you could also decide to jog inside the compound, where there are numerous trails and paths.
More Info
Open In Google Maps
Λεωφόρος Κηφισίας, Marousi, 151 23, Greece
+306986099129
Visit website

Hill Station
Hymettus is a popular spot for hiking and mountain biking | © CoinUp / Getty Images
At an elevation of 1,000 metres (3,280.8 feet), Ymittos is a favourite getaway destination for Greeks and tourists alike. Located in the northeastern part of Athens, the mountain is easily accessible via Kaisariani, Agia Paraskevi or Papagou. With a series of dirt trails and paths, the mountain is ideal for those into trail running, although you could also opt to run on the asphalt road, as there is little traffic. As a bonus, you will get to witness magnificent views over the city and the sea.
More Info
Open In Google Maps
Athens, 190 02, Greece
Book with our partner and we will earn a small commission.