The Best Restaurants in Syros, Greece 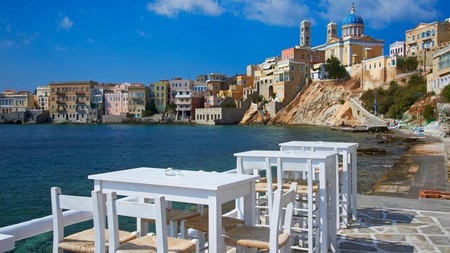 Syros is quieter and less popular with visitors than many of its neighbouring Greek islands – which include Mykonos, Andros and Tinos – so whether you’re dining at a taverna in the capital Ermoupoli or a French bistro in Poseidonia, you’ll find good value and authenticity.

Syros in Greece has managed to stay traditional and authentic while some of the islands surrounding it have become major tourist destinations. All of this is reflected in its landscape and in its eateries. Restaurants on Syros have a laid-back atmosphere, and offer local wines and quality Greek cuisine. But among all this tradition and nostalgia, there are also a few surprises that prove Syros is forward-thinking, meaning eating out on the island gives you the best of both worlds. 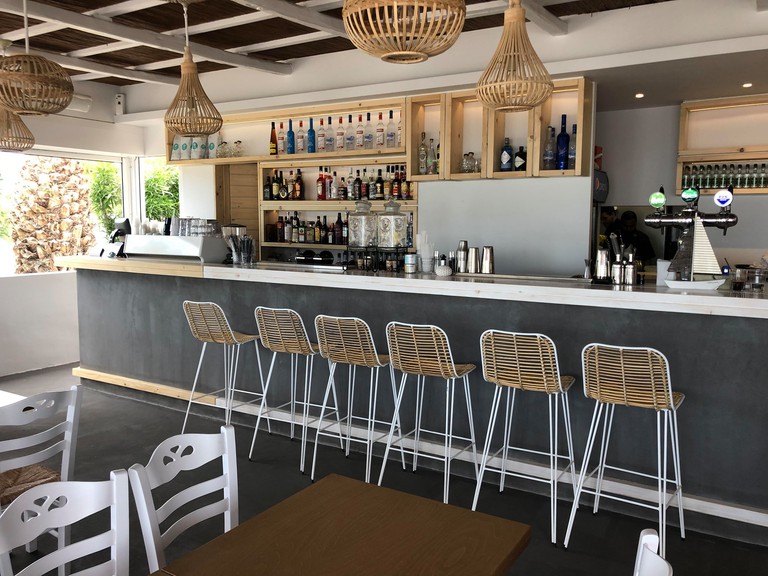 © De La Gracia
Right on Agathopes Beach, this self-styled beach bar is an open-plan, light and airy restaurant by the sea. The atmosphere is lazy and laid-back, and the seafood is fresh and plentiful. The restaurant also has a well-stocked bar, ironically not always found at beach bars. The cocktails are stand-out, but if you’re ordering seafood go for a bottle of cool, crisp white wine. The food is great here, the location is perfect and the staff are genuinely happy to see you. 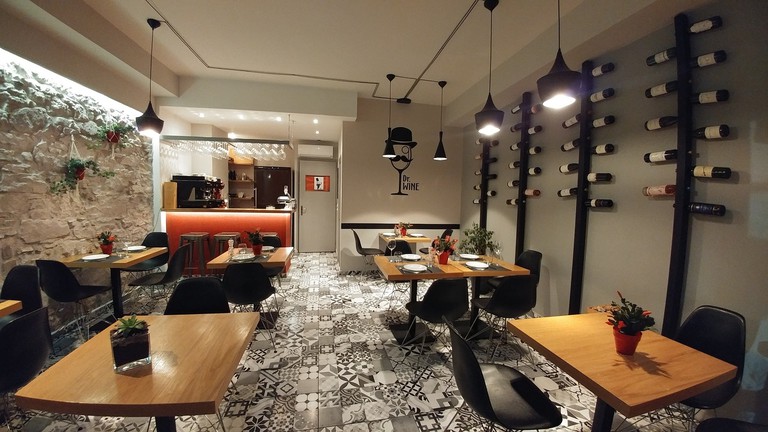 © Dr Wine
Don’t be fooled by the name of this Ermoupoli establishment. Yes, this is a wine bar and yes, the focus here is wine, but aside from the incredible wine selection and the knowledgeable staff who live and breathe wine, this is also a restaurant with some quality dishes on the menu. The atmosphere is relaxed, there’s a view of the sea and the restaurant has a very modern feel to it. Don’t worry if you don’t like wine – the food is enough to draw you in and there is also a good selection of beers. 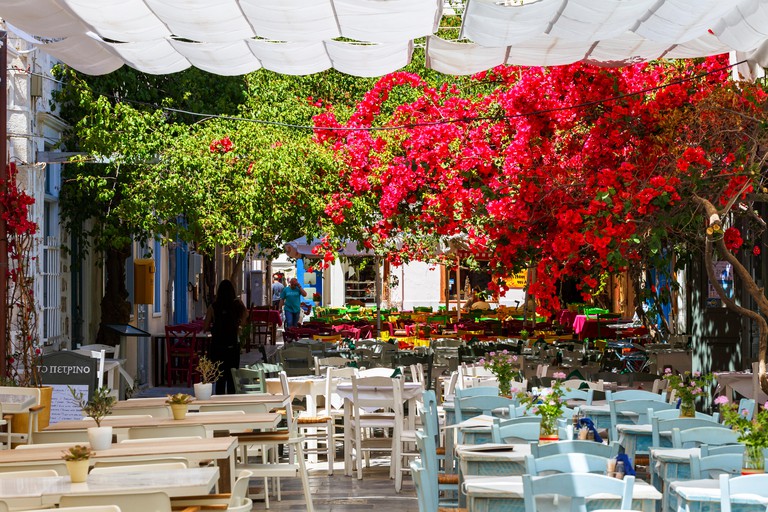 © Milan Gonda / Alamy Stock Photo
The parade seating you see outside this restaurant in central Ermoupoli often puts people off, as the expectation is high prices, but that’s not the case here. This is a no-frills restaurant that only has tables with cheap tablecloths clustered out in the pedestrian area because the place is so popular. The food here is traditional, homemade style, the portions are ample and it tastes of homeliness and comfort. 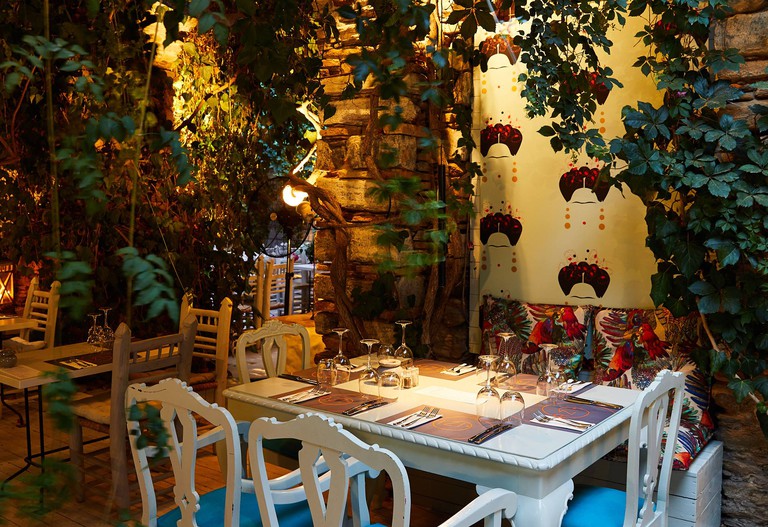 © Mazi
The “secret garden” element to this restaurant, tucked down an alleyway near Ermoupoli’s Miaoulis Square, brings the outdoors in and the inside out. Foliage is draped along the arches and ceiling of this characterful restaurant and outside the tables and chairs are of the same high restaurant standard as the inside. The menu is interesting and many of the dishes feature contrasting flavours, which, even if you think it doesn’t sound right on paper, really works. There’s a good selection of Greek wines, with an emphasis on the local bottles.

It might not look like anything special, but at Seminario, which is down a narrow street in the island’s capital, the food speaks for itself. Portions are large here, so if you’re not such a big eater, share your dish with someone else in your party. The atmosphere is easy-going and the staff can’t do enough for you. If you have a food intolerance or you’re vegan, this is the place to go. All diets are catered for with the same level of attention 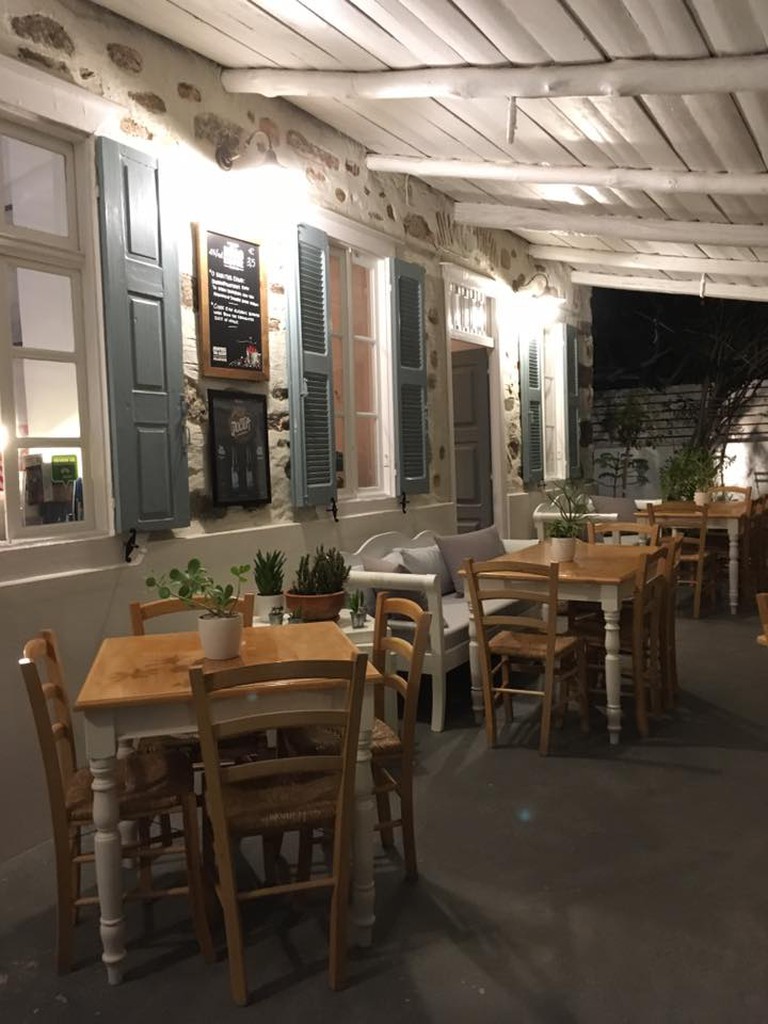 © Perroquet Tranquille
When you want a change from Greek food, head to Perroquet Tranquille in Poseidonia for some French cuisine. This bistro is unusual and brings a little corner of Provence to the Greek island. Start your day off with a French breakfast, try the charcuteries for lunch and enjoy a relaxing dinner of Mediterranean French cuisine. It’s also a great opportunity to try out some good French wines. This intimate French bistro is an unusual find on a Greek island.

If you’re looking for somewhere to stay after trying out one of these restaurants, you can now choose from the best hotels in Syros, bookable through Culture Trip. Alternatively, you could hop over to Mykonos and check out the most beautiful beaches on the island, followed by a meal at one of its top restaurants. Experience some of the best nightlife on the island, followed by a stay at a boutique Mykonos hotel.