The Best Restaurants in Milos, Greece 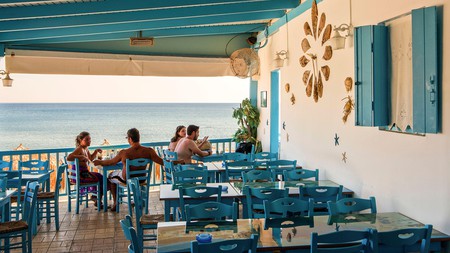 There are plenty of al fresco options when it comes to dining in Milos | © REDA &amp;CO srl / Alamy Stock Photo

Tavernas on first-name terms with local fisherman and a beachside spot that uses geothermal springs to slow cook pork are on the menu across the ruggedly beautiful volcanic isle of Milos.

A Greek island that curves around an ancient caldera, Milos features some of the most spectacular rock formations in the Cyclades. Inhabited since Neolithic times, it’s rich in historic remains, from the Roman-era catacombs to the Venus de Milo statue, which comes from here and now has pride of place in the Louvre. The craggy coastline of Milos loops via traditional fishing villages to showcase cuisine shaped by the sea and the rocky volcanic soil, too. Here are the best places to eat in Milos.

The staff at this harbourside restaurant in Pollonia are happy to guide you through their selection of Cycladic PDO (Protected Designation of Origin) olives, wine and cheese. Locally caught seafood features prominently on the menu, from feta-stuffed squid and the house speciality of stifado (stew) featuring octopus, tomatoes, onions, wine and Milos honey, to pasta with sea urchins and bottarga (cured fish roe). It’s hugely popular, so reservations at dinner are a must.

A particularly handy dining option if you’re visiting the Roman catacombs, this homey taverna in the hilltop village of Tripiti combines sunset views from its terrace with generous portions of seriously good home-style cooking. You’re away from the coast, so expect the likes of oven-baked veal and roast kid; equally good are the vegetarian mezze, such as the baked peppers stuffed with manouri (a local goat’s cheese), or the pitarakia (Milos cheese pie).

Sea splashes at your feet in the traditional fishing village of Klima, reachable via some hairpin bends from hilly Trypiti. Take in the syrmatas (colourful boat garages dug into volcanic rock) while you wait for Nikolas, the owner of this elegant taverna, to serve you. Fishermen bring him a fresh catch up to three times daily and seafood is the star here: grilled octopus, shrimp saganaki (appetiser), barley with cuttlefish ink – while vegetable side dishes are made from Nikolas’ home-grown produce.

On Milos’ south coast, overlooking the pebbly Paleochori beach, this casual restaurant makes use of the island’s volcanic origins. Stella Tseroni, the owner, uses geothermal springs next to the tavern to slow cook her dishes for hours in the sand at low temperatures, while her son invites you to watch as he digs up your meal. Don’t leave without trying the pork shanks, potatoes with spiced cheese, or fish baked with vegetables.

Run by Antonis and Georgios, the sons of the original owners, Pollonia’s quintessential seafood taverna has been locally renowned for years for the quality of its fish and seafood dishes. The fried cuttlefish with rosemary and the lobster linguine are firm favourites, but also look out for fried sea anemones (a delicacy that’s not available every day). The wine list – with its emphasis on Cycladic and organic wines – is worth browsing.

Perched on the cliffs above the Aegean and the brightly-painted syrmata (traditional fishermen’s houses) of Mandrakia village on Milos’ north coast, this ouzerie is an idyllic spot for a leisurely lunch. The mezze is the big draw here – the perfect accompaniment to local ouzo. All plates are best shared, and must-tries include smoked sun-dried mackerel, pitarakis (Milos cheese pie), grilled sardines and zucchini balls.

Across the bay from Adamas port, on the little-visited west side of Milos, this taverna is ample reward for the drive along dirt roads. Traditional Greek music plays in the background as you sit on the waterfront terrace, and contrary to expectations, the special here is not fish but the goat: slow-cooked in the large wood-fired oven. Tomato keftedes (deep-fried balls) and fried potatoes – both grown in the large garden behind the restaurant – are fine accompaniments, as is the house wine.

Near the boat dock in Pollonia, refined Gialos satisfies with one of the most contemporary, seasonal and creative menus on the island. Sit under the awnings, overlooking the harbour, and order the standout orzotto (orzo-made risotto) with cuttlefish ink, prawn tartare, or the chicken stuffed with sun-dried tomatoes. Gialos can also grill your steak exactly how you’d like it, and the desserts – including white-chocolate mille feuille with caramelised strawberries and a hot-chocolate tart – are equally good.

There are lots of things to see and do in Milos, including looking at some beautiful villages on the island. If you want to explore further make sure to stay in a boutique hotel or a budget hotel in Santorini, bookable on Culture Trip. In addition, check out the best restaurants on the island while you’re there.