Odysseas Elytis was one of the greatest poets of modern Greece. He was born in 1911 in Heraklion, Crete and by the age of three he and his family came to Athens. He came in touch with significant Greek painters, poets and authors who influenced his artistic expression. His significance was highlighted when he awarded with a Nobel Prize in Literature in 1979. Here we will approach some poems of this unique romantic modernist. 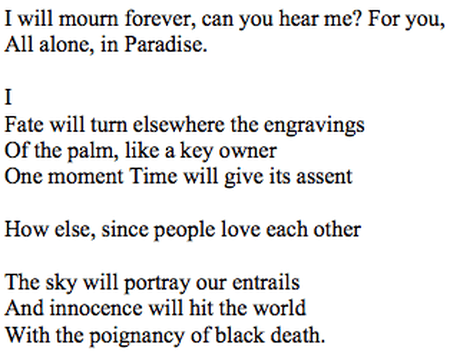 “The Monogram” was written during Elytis’ stay in Paris from 1969 until 1971 and was published in Greece in 1972. It is a love song full of emotion and lyricism, pictures, thoughts and symbolisms. The poem reflects the agony of the creator before the powerful and invincible element of time and his efforts to create a harmonic order through the eternal beauty.

from "The Axion Esti"

“The Axion Estin” is inspired by the memories of the 1940-1941 war, the German occupation, the Greek resistance and the Greek Civil War that followed. Elytis has a living experience of all these crucial phases of the modern Greek history and understands them as aspects of the timeless siege of Greece by the forces of Evil. Axion Esti was made into a song and was generally enthusiastically received by the Greek readers and the literature critics. This did not happen only due to its artistic value, but also due to its operation as a fundamental work that redefined the Greek collective unconscious by elaborating repressed experiences and myths from the modern Greek history. 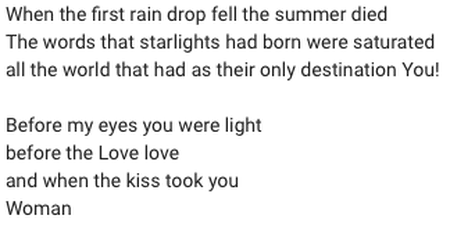 from "When the first rain drops of summer fell"

“When the first rain drop fell the summer died”

This surrealist poem mixes sounds and smells from the Greek reality. It focuses on the themes of absolute Love, woman, nature, death. It is a great sample of the incomparable talent of Odysseas Elytis, who mixes unmixable ingredients and creates deeply human pictures and emotions. 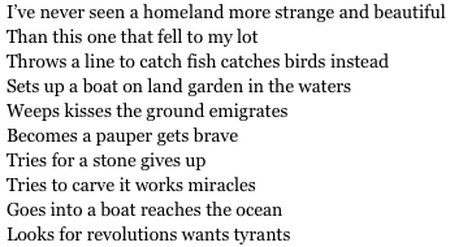 from "Beautiful and Strange Homeland"

This short, dense and ironic poem describes the Greek country, as well as the nature, the people and the animals. The always topical poem highlights the contradictory Greek psychological profile that can be summed up in the following single verse of the poem: ‘he cries, kisses the dirt, migrates’.

from "Marina on the Rocks"

“Marina of the Rocks”