The Best Cinemas in Athens, Greece

The Best Cinemas in Athens, Greece

Zefyros open-air cinema | © Bart van Poll / Flickr
Come winter or summer, a great activity to do in the evening to unwind and relax is to watch a movie. However, cinemas are virtually the same everywhere, so Culture Trip has compiled a short list of the theatres you should check out for a memorable experience. From old-fashioned, open-air cinemas to indie movie theatres and mega cinema complexes, here are the top cinematic venues to visit in Athens.

Cinema, Movie Theater
Vasilios Koutroumanos | Courtesy of Ciné Thissio
Thanks to its mild climate, Athens used to be home to many outdoor cinemas during the 1960s. Today, around 70 are still open, with a favourite among locals and visitors being Cine Thisio, built in 1935. With a unique location facing the Acropolis, the cinema is a perfect venue where you can relax and watch a movie while sipping your favourite beverage in the cool summer breeze. And when the temperatures drop a bit too much before the annual closing, blankets are available.
More Info
Open In Google Maps
7 Apostolou Pavlou, Athina, 118 51, Greece
+302103420864
Visit website

An ‘underground’ independent cinema room, Cinemarian regularly organises movie screenings, seminars, art festivals and tributes to famous movie directors. With ticket prices as low as 2.50 euros, the little theatre also has a small bar and a relaxed vibe, making it very special. It’s an excellent place to mingle with locals and learn more about the fascinating world of cinema. 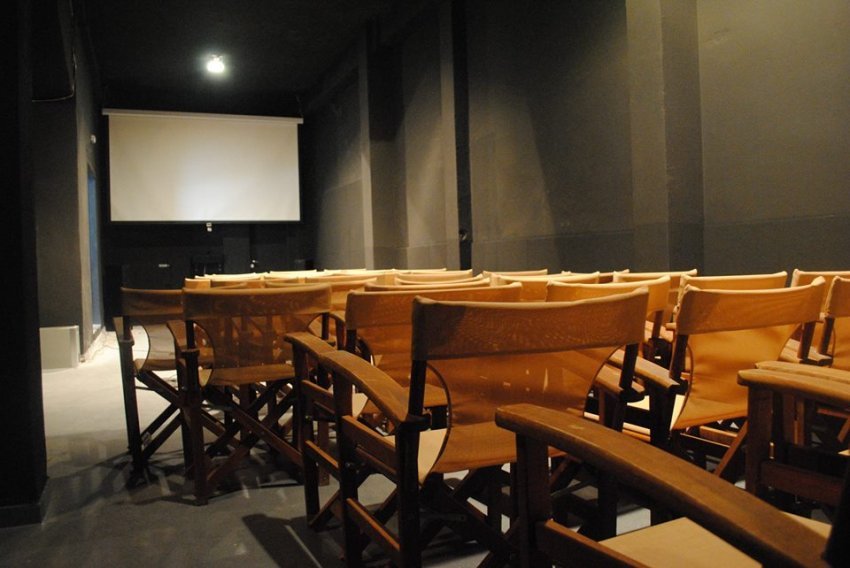 Cinema, Movie Theater
Cinema Mikrokosmos, Athina | Courtesy of Mikrokosmos Cinema
Mikrokosmos is a hybrid place that serves as a cinema and a bar. This one-screen movie theatre often hosts film festivals, tributes and other events, as well as a regular program of independent films, both Greek and international. But Mikrokosmos’ bonus point is its bar. Don’t expect the typical small concession cafeteria available in every cinema but rather a bar where you can have proper drinks. Indeed, you might forget all about that movie and simply mingle with the regulars at the bar.
More Info
Open In Google Maps
106 Leoforos Andrea Siggrou, Athina, 117 41, Greece
+302109230081

Cinema, Movie Theater
Cinema Athinaion 1 & 2, Athina | Courtesy of Athinaion CInemas
Located on Vassilisis Sofias and Alexandras Avenue, Athinaion Cinema is a small cinema like any other, but what makes it truly unique is that just like in the old days, the movie posters are hand-painted. Vassilis Dimitriou has been painting the cinema’s posters for over 50 years and claims to be the last one to do so in Europe. Whether this is true or not, there is no doubt that Athenians always check the cinema’s hand-painted posters when they pass in front of them.
More Info
Open In Google Maps
124 Leoforos Vasilissis Sofias, Athina, 115 26, Greece
+302112112222
Visit website

Cinema, Movie Theater
Zefyros open-air cinema | © Bart van Poll / Flickr
Zefyros New Art Cinema is an outdoor cinema where you shouldn’t expect any blockbusters. Rather, Zefyros is a hangout for cinephiles interested in classics, indie and art movies. Furthermore, Zefyros organises other cultural events you do not want to miss. After your movie, cross the street to eat at one of the two tavernas or end the night on a high note with a drink at Theio Thragi.
More Info
Open In Google Maps
36 Troon, Athina, 118 51, Greece

Village World Cinema at The Mall

Cinema, Movie Theater
If you are into multiplex cinemas, then Village World is for you. Of course, crowds pack the movie theatre during the weekends, so make sure you arrive early. At Village World Cinema, you get 14 rooms with Dolby surround sound systems, and three of them have 3D screens. Located near the Olympic Stadium in Maroussi, in northern Athens, the cinema is easily reachable by public transport and has a huge multi-level parking lot. But if you don’t feel like heading north to watch a flick, nothing to worry about – there are several Village Cinemas around Athens.
More Info
Open In Google Maps
35 Andrea Papandreou, Marousi, 151 22, Greece
+302106104100
Visit website