The Most Beautiful Villages in Crete, Greece 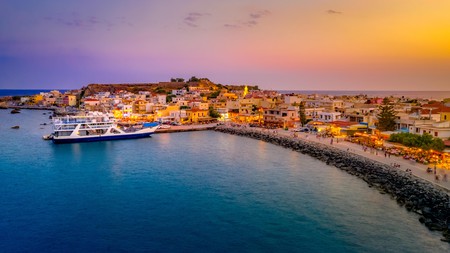 Whether you’re in Crete to relax on the Elafonisi shoreline, see the Palace of Knossos or simply spend your holiday taverna hopping, make sure to carve out time to visit the many beautiful villages in Crete. Here are the most picturesque.

Of course it’s part of Greece, but the island of Crete, out there on its own in the southern Aegean Sea, feels like its own country. The food is standout, as is the produce – crumbly local white cheeses, bitter and beautiful olive oil, sautéed lamb with wild greens and succulent snails, fish and seafood. The scenery is diverse and spectacular, with severe mountain ranges and gentle green valleys, up-for-it resort towns and tiny hamlets with near-silent secret beaches. If you crave peace and quiet, follow us to these villages, the island’s most beautiful. 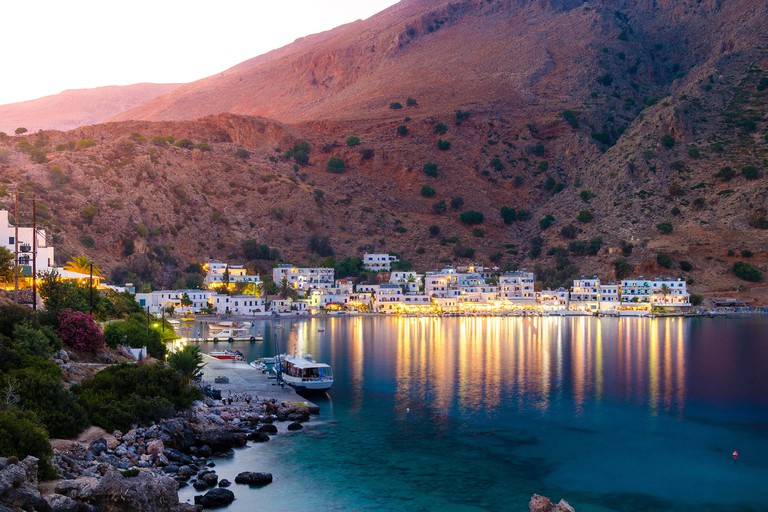 © Georgios Tsichlis / Alamy Stock Photo
The journey to Chora Sfakion – 90 minutes by bus from Chania – is memorably scenic, all fertile valleys, arid ravines and a long, final switchback descent overlooking the Libyan Sea. By the time you arrive in Chora Sfakion, you’ll be ready to lie back and do nothing for a week – which is handy, as indolence is this tiny settlement’s middle name. The Sfakians are known for their friendly demeanour, and the restaurants that line the port are interchangeably good; we recommend sampling a Sfakian pie made with fresh cheese and honey. The Three Brothers Taverna is as idyllic as Vrissi, the local beach it overlooks. And little boats ferry you west along the coast and back, to Sweetwater Beach, home to the Mermaid restaurant, run by the wonderful Yorgos.
Open In Google Maps
Hora Sfakion, Greece
Give us feedback

Architectural Landmark
Facebook
Email
Twitter
Pinterest
Copy link
Share
Map View
You’ll find Anogia among stunning landscapes in the west-central Rethymno region, near the ancient Ideon cave where – Greek mythology has it – Zeus spent his youth. Although razed in World War II, Anogia today is a happy, gentle whirl of outdoor cafes; pick a spot in Agios Georgios square under one of the shade-dispensing trees, which are as old as the town itself. At some stage make sure you tuck in to roasted lamb, as the Rethymno region is known for stockbreeding, and most of the cuisine around these parts is prepared using authentic local ingredients. As well as visiting the nearby Nida plateau, part of the Psiloritis range, you can check out the great museums in Anogia showcasing Cretan folk art.
Open In Google Maps
Anogia, Rethymno, 740 51, Greece
Give us feedback 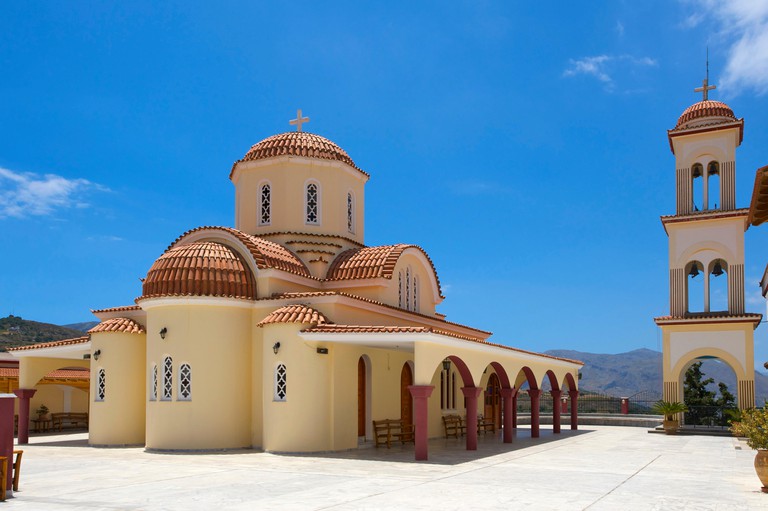 © imageBROKER / Alamy Stock Photo
Stop in the photogenic little town of Spili on your way to the better-known coastal city of Rethymno, 30km (19mi) further north. Even if you just sit for a coffee at one of the numerous cafes, you’ll probably end up exploring the place and wandering the cobblestone streets. There is a beautiful monastery plus plenty of quaint little shops selling dried herbs and other souvenirs to take home with you. Standing at the foot of Voriza mountain, the town is lush and green, and the climate is fairly temperate during the summer months compared to other parts of the island.
Open In Google Maps
Spili, 740 53, Greece
Give us feedback

Architectural Landmark
Facebook
Email
Twitter
Pinterest
Copy link
Share
Map View
Just east of Rethymno along the E75 coast road, Platanes has two selling points: a popular beach and easy access to its big-city neighbour. You might want to make Platanes your base for a Rethymno city break, as there are some gorgeous hotels and resorts here, with magnificent views of the vibrantly blue Aegean Sea. Platanes is abuzz with bars, pubs, taverns, cafes and restaurants serving regional treats. Look out for dakos – barley rusks topped with diced tomato and crumbly Cretan mizithra cheese. The place is also famous for sea turtles, which come ashore each summer to build nests and lay eggs.
Open In Google Maps
Platanes, Rethymno, 741 00, Greece
Give us feedback 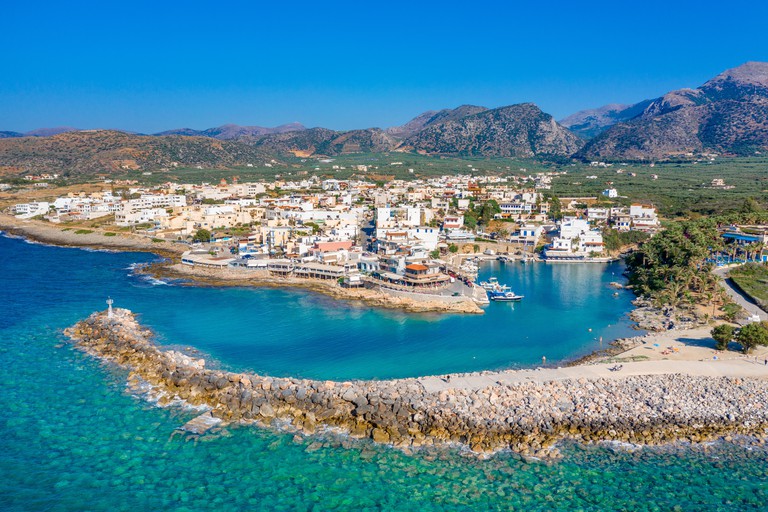 © Georgios Tsichlis / Alamy Stock Photo
Sissi is an unexpectedly lovely town off the E75, 45km (28mi) east of the capital, Heraklion. The highlight is the wonderful waterfront, and the idyllic little natural port is its lifeblood. It is rich in history, too, having played a significant role in the insurrectionist Cretan Revolt of 1866-69, when the islanders rose up against their Ottoman colonisers and unloaded their weapons from boats here. Today, fishing predominates. You’ll see men and women pulling in the catch and cleaning the fish that will resurface on your taverna table at dinner time – Sissi is famous for delivering some of the freshest, most flavourful fish and seafood in the Mediterranean.
Open In Google Maps
Sisi, 724 00, Greece
Give us feedback

Architectural Landmark
Facebook
Email
Twitter
Pinterest
Copy link
Share
Map View
Home to about 2,000 inhabitants, the southwestern coastal town of Paleochora is relatively large and well supplied with accommodation options. It overlooks a marvellously blue seascape, and is just the ticket if you’re looking to spend a few days on the beach. It’s also the start of a great beach hopping holiday, as between April and October a seasonal ferry service operates back and forth between here and Chora Sfakion several times a day, calling in at the coastal idylls of Sougia and Agia Roumeli. Pedestrian-friendly streets lined with whitewashed buildings invite you to wander and explore. In doing so you’ll uncover all sorts of bars, artisan shops and restaurants that you’ll return to again and again during your stay.
Open In Google Maps
Palaiochora, Greece
Give us feedback

Architectural Landmark
Facebook
Email
Twitter
Pinterest
Copy link
Share
Map View
The Matala shores have mythological significance, as Zeus is said to have emerged from the sea here, disguised as a bull. Despite this celebrated backstory – and the not inconsiderable size of the town – Matala remains an idyllic escape from the busier, more touristy areas of Crete. In fact, it has more in common with the quiet fishing villages of the island than it does with big resorts. The mood is certainly laid-back. Matala was a hotspot for 1960s hippies; Joni Mitchell stayed here and namechecked the place in the song Carey, on her 1971 album Blue. She is said to have stayed in one of the mysterious caves in the spectacular sandstone cliffs, which are believed to have held ancient tombs.
Open In Google Maps
Matala, 702 00, Greece
Give us feedback 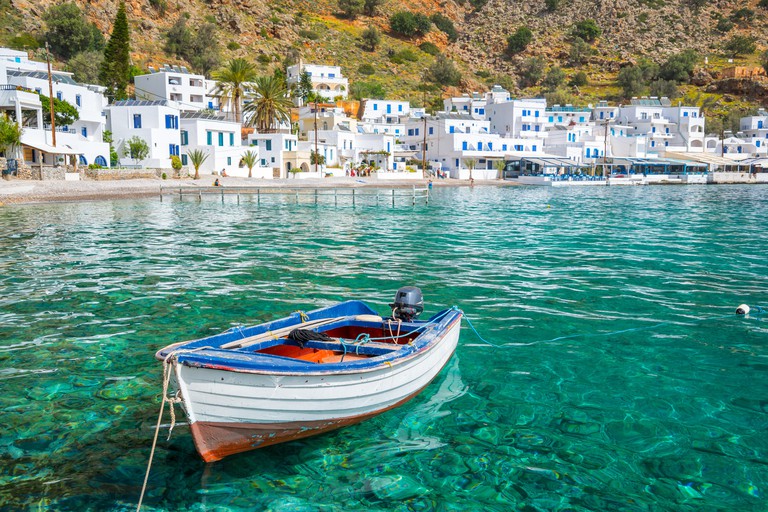 © Delphotos / Alamy Stock Photo
Loutro enjoys regular daily ferry links to Chora Sfakion, a 20-minute voyage east along the coast, so we suggest getting to know both locations if you’re in the region. With no access by road, the place is a traffic-free, narrow ribbon of whitewashed hotels, apartments and homes with blue window frames and shutters circling an improbably transparent bay, all hemmed in by tawny mountainous slopes. It is perfect for a day trip, but we say stay: Loutro is truly romantic as the late-afternoon sky ripens to peachy sunsets and you sip an aperitif at one of the bars on the water’s edge, before picking a taverna for a balmy al fresco dinner. There’s a pebbly beach here, but our advice is to hop on one of the regular ferries that dock outside the Daskalogiannis Hotel and make a day of it on remote Sweetwater Beach or diminutive Marmara Beach. Each has a great restaurant.
Open In Google Maps
Loutro, Greece
Give us feedback

Architectural Landmark
Facebook
Email
Twitter
Pinterest
Copy link
Share
Map View
Episkopi is a small agricultural village along the Mousselas river valley, about 20km (12mi) from Rethymno, with great swimming on fine beaches and lovely green surroundings. The main product is olive oil, which is reason enough to make the detour to what is one of the older Crete towns, with a name that means diocese in Greek. You can’t fail to notice the various Byzantine churches – often still functioning, with remarkable frescoed interiors – as you wander the streets. You might ultimately decide to stay here rather than in busy Rethymno, as it is peaceful and there are plenty of decent accommodation options.
Open In Google Maps
Episkopi, 700 08, Greece
Give us feedback

Architectural Landmark
Facebook
Email
Twitter
Pinterest
Copy link
Share
Map View
More developed than many villages in Crete, former fishing settlement-turned-resort Agia Pelagia has everything you need for a relaxing holiday, while not being too big for its boots. There are few Cretan pleasures lovelier than sitting at a terrace table, beside the perfect circular bay, and drinking a cold, clean white wine with your sea bass dinner. On the north coast, about 30 minutes’ west then north from Heraklion (and served by bus), it has several beaches within easy reach. Despite the proximity to the island capital, and the splendidly clear, calm sea, the resort doesn’t suffer from overcrowding in summer, which is the time to be here, as in winter the place all but closes down.
Open In Google Maps
Agia Pelagia, 715 00, Greece
Give us feedback

Half an hour along the coast from Chania, this historic village encapsulates the crumbling charm of Crete. Old stone buildings line narrow winding streets shaded by giant eucalyptus trees, their trunks whitewashed and tacked with posters for local businesses. From terraced cafes spill the sounds of clinking glasses and laughter, and you can take an atmospheric post-lunch amble among the historic Vamos ruins, among them the ancient olive press with half-destroyed ceiling arches. And, from the highest point, the sparkling blue sea beckons you down to the beach.

Open In Google Maps
Vamos, 730 08, Greece
Give us feedback 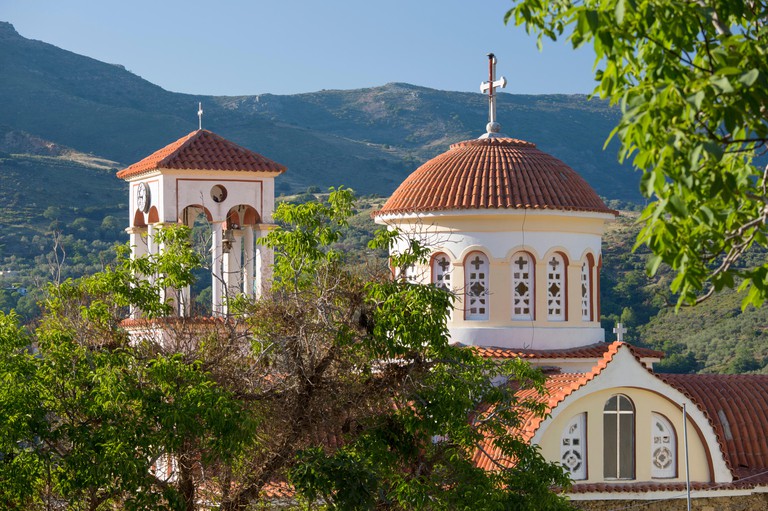 © David Tomlinson / Alamy Stock Photo
This is a blink-and-you’ll-miss-it place in the west of the island, emerging by surprise after several switchbacks through olive groves. It’s no more really than a single road, lined with a handful of charming shops, restaurants and cafes, so you won’t need a lot of time to explore. But there’s a beautiful old church on the top of the hill with a flaking, frescoed ceiling and a cute gift shop run by a lovely old couple, which sells traditional Cretan arts and crafts as well as olive oil and honey.
Open In Google Maps
Elos, Greece
Give us feedback

Narrow streets of whitewashed, sugar cube houses with cobalt-blue shutters; balconies blazing with geraniums, bright-pink oleander and hydrangeas; street corner cafes buzzing in the shade of perfumed fig trees – this little coastal village is the epitome of Greek prettiness. And that’s before you hit the beach, a long swathe of putty-coloured, shingly sand, washed by cool, spring-clear waters. After working up an appetite in the sea, pad along the promenade to eat fresh, succulent octopus at the Beach Cafe Restaurant, washed down with a cold Mythos beer.

Open In Google Maps
Myrtos, 720 56, Greece
Give us feedback