The Best Restaurants on Patmos, Greece 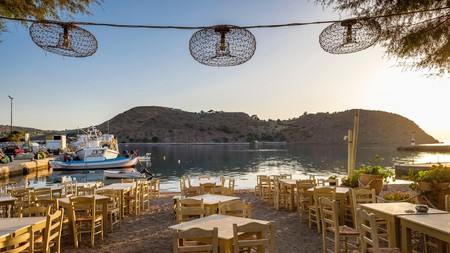 Being able to watch the sun sink into the Aegean while you’re feasting on wonderfully fresh seafood, home-style mezze platters and crisp local wines is one of the great pleasures to experience on the Greek islands – and the dining scene in mellow, mystical Patmos is no exception. Low-key beachfront tavernas, buzzy ouzeries in hilltop hamlets, and elegant farm-to-table family restaurants are just a few of the treats on our list of the best places to eat on Patmos, many of which spotlight their own home-grown produce.

A farm-fresh culinary adventure awaits at the intimate and hugely popular restaurant and tapas bar Benetos on Sapsila Bay, where Benetos and Susan Matthaiou deliver Mediterranean-Asian creations at a handful of summer-only tables overlooking the Aegean. Local seafood and vegetables plucked straight from the surrounding organic gardens fuel season-inspired dishes such as lobster-laced pasta, fried goat’s cheese and calamari dipped in a lemon-and-ginger sauce. The home-baked bread, creative cocktails and elegant Greek wines add to the appeal.

With blue-washed tables perched right by the sea on pebbly Lambi Beach (one of the prettiest strands on the island), this seafood-fired taverna is a long-running favourite stop along the north Patmos coast. Spreads of fuss-free Dodecanese sharing plates, piled high with crisp fried-cheese saganaki (appetizer) and stuffed vine-leaf dolmades (stuffed vine leaves) give way to platters of super-fresh local fish, served grilled and drizzled with just a squeeze of lemon. 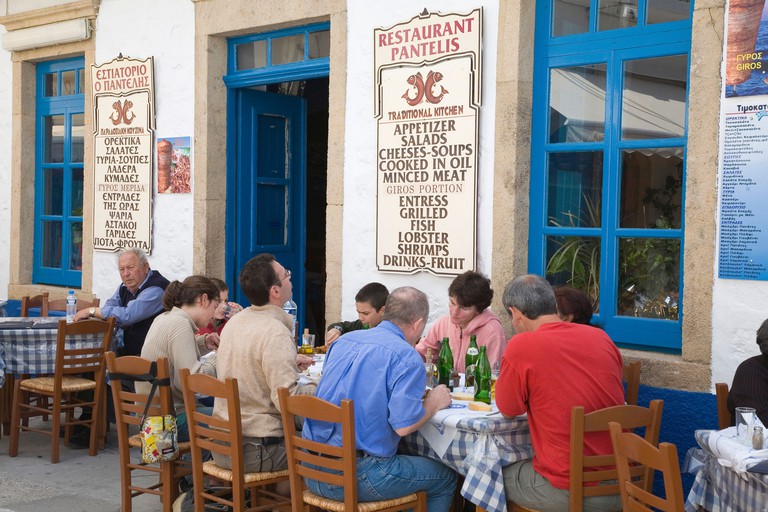 © Odyssey-Images / Alamy Stock Photo
One of the original tavernas on the island, tucked just behind the port in Skala, lively Pantelis revolves around traditional Greek recipes dished up in a charmingly rustic setting and has been going strong for around half a century. Meaty stews, freshly grilled squid and home-cooked magirefta (casserole-style dishes) grace the menu, and there’s often live music – all enjoyed at streetside tables decorated with fresh flowers.

Restaurant, Mediterranean, Greek, Vegetarian, $$$
Facebook
Email
Twitter
Pinterest
Copy link
Share
At Ktima Petra, beautifully fresh home-grown produce from the family’s own farm creates some of the most exciting traditional cooking on Patmos. The shady terrace on the edge of pebble-studded Petra Beach, over on the southeast coast, makes a dreamy island setting for feasting on skilfully prepared Greek staples – bowls of velvety fava dip (broad bean), crunchy salads topped with oregano-dusted feta, and slow-cooked meats from the wood-fired oven.

For blissful seclusion, hike half an hour, or boat over to the no-frills seasonal taverna on gold-dusted Psili Ammos Beach, near Diakofti on southwest Patmos. Shaded by flowering tamarisks, this protected cove within a nature reserve is one the most scenic corners on the island – perfect for a long, lazy lunch after a dip in the Aegean. Dig into feta-loaded Greek salads, platters of zingy tzatziki or stewed goat with hand-cut chips on the vine-covered terrace.

Some of the finest fresh seafood and mezze plates on Patmos are served with flair under shady tamarisks at this top taverna on the beach in Skala. With tables right by the water, the setting is a delight, while must-try dishes (both traditional and contemporary) swing from the signature octopus with fava beans to island favourites, including flambéed saganaki cheese, langoustine spaghetti and chips fried in olive oil, with a dusting of oregano.

Sky-blue trim and strings of dangling octopus set the scene at superb family-run taverna Pantheon, in the shadow of the whitewashed 11th-century Monastery of St John the Theologian in Chora. No surprise, then, that star plates here include perfectly grilled octopus; but there are also delicate courgette fritters, fava beans topped with a drizzle of lemon, and other classic temptations. Crowd onto one of the street-terrace tables, or settle into the wood-beamed dining room.

For a contemporary spin on Greek cuisine, book in at the romantic Pleiades on Sapsila Bay, where respected Corfu-raised Italian chef Ettore Botrini has devised a creative menu that celebrates the Aegean onto which the restaurant gazes. Reimagined Greek salads burst with home-grown produce, the fresh seafood follows Patmian tradition, and it’s all paired with house-mixed cocktails and wines from the mainland. The sunsets over the pool here are magical. The restaurant is part of Eirini Luxury Hotel Villas.

Tamarisk trees, aqua waves, a lovely pebble cove and a chapel on an offshore isle set a dreamy Greek backdrop for typical island cuisine here. The little whitewashed taverna on Livadi Geranou Beach, on northeast Patmos, has a popular terrace overlooking the waves, where you can devour plates of fresh grilled fish, Greek-style tzatziki and crispy courgettes, along with local wines or a drop of tsipouro (raki).

Known for its standout Cretan specialities, this beloved Patmos old-timer rolls out classic mezze platters on a view-laden terrace gazing out across the harbour in Skala. Rustle up a bottle of house wine, and linger over home-cooked dinners of grilled squid, filled dolmades (vine leaves) and stuffed courgette flowers – until the live music (and ouzo rounds) kick off later on. It’s a cheery place that gets packed, so you’ll want to book ahead.

Beyond the restaurants, there’s plenty to see and do on Patmos, but, if you want to explore more of Greece, you should check out some of the beautiful beaches near Athens. The capital also boasts a great range of hotels and boutique hotels that are bookable with Culture Trip, as well as the opportunity to try some authentic Greek cuisine.

This is a rewrite of an article originally written by Chrisa Theodoraki.