The 10 Best Restaurants in Mykonos, Greece 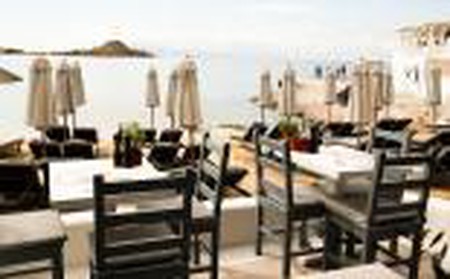 Mykonos, one of Greece’s most beautiful islands, was ruled by the Romans, Venetians, and the Ottomans before coming under Greek control in the 1830s. This complex history has resulted in an exciting contemporary cuisine, which the island’s restaurants delight in sharing with curious foodies. Updating our previous guide, here are 10 of the best local restaurants where you can soak up the finest of Mykonos’ culture and cuisine.

Avli tou Thodori boasts one of the finest locations in Mykonos, situated on the Platis Gialos beach – one of the most popular and beautiful pieces of coastline on the island. The winner of a TripAdvisor Certificate of Excellence for 2014 based on consistently excellent customer feedback, Avli tou Thodori offers classic Greek dishes to diners. You can choose from traditional appetisers including fava beans, hummus, fried zucchini, feta wrapped in filo pastry, and grilled halloumi cheese. Main courses include locally caught grilled octopus, steamed mussels, or grilled calamari or sardines – or if you are feeling a little more carnivorous then try the pork or chicken souvlaki. 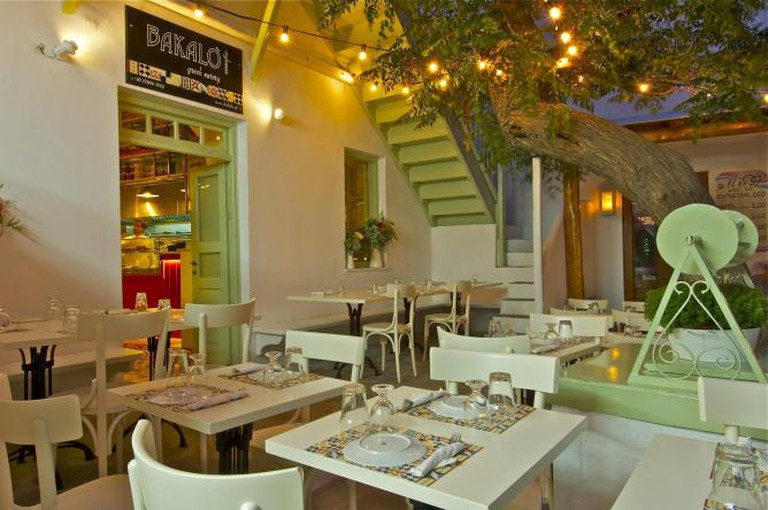 Bakalo | Courtesy Bakalo
Bakalo is set in a traditional Mykonian house that dates back to the 18th century with a courtyard garden. Located in the Lakka neighbourhood in the Old Town on Mykonos, the restaurant serves traditional-style food made using local ingredients and produce from neighbouring islands. On the menu, you will find dishes such as Mykonian spiced cheese with peppers, Cycladian cheese dumplings with tomato and lemon dressing, marinated octopus from Syros, and baked mushrooms stuffed with pork and gruyere cheese from Naxos.
Open In Google Maps
Mykonos Town, 846 00, Greece
+302289078121
Visit Website
Give us feedback 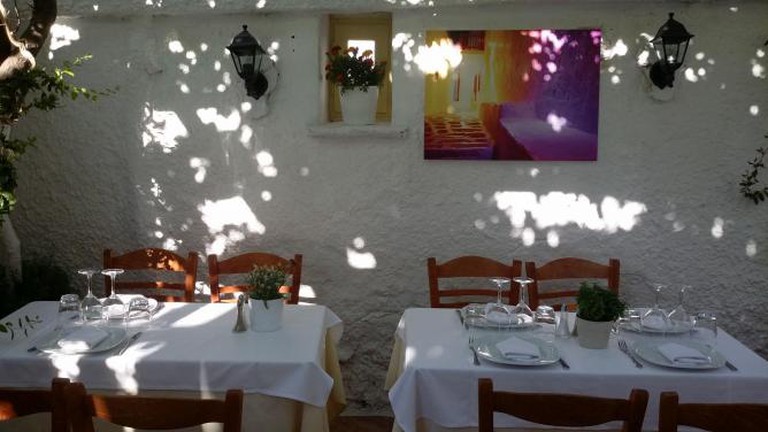 Courtesy Eva's Garden
Eva’s Garden Restaurant is a little harder to find than most Mykonos restaurants, tucked away in Goumenio Square, but the search is most certainly worth it for the high- quality classic Greek fare served. The dining area is a rooftop terrace with hanging vines with views of the Aegean in the near-distance. The menu is traditionally Greek, though the selection of seafood is extensive – you can choose between grilled sea bream, salmon, swordfish, shrimp, or opt for a lobster. Alternately, there are plenty of meat dishes on offer too, including veal and chicken fillets, chickens served with cashew nuts, lamb with lemon sauce, and pork souvlaki.
Open In Google Maps
2 Kalogera, Mikonos, 846 00, Greece
+302289022160
Visit Website
Give us feedback

Restaurant, Seafood, Mediterranean, Sushi, $$$
Facebook
Email
Twitter
Pinterest
Copy link
Share
Map View
Based on the spectacular Agios Ioannis beach to the south of Mykonos Town, Hippie Fishis a bar and restaurant that offers diners an extraordinary view of the Aegean all the way to Delos on the horizon. The architecture of Hippie Fish combines traditional Cycladeanwith more modern touches, and the food is similarly traditional Mykonian with some contemporary elements thrown in. Hippie Fish is also where the classic film Shirley Valentinewas filmed at the end of the 1980s starring Tom Conti and Pauline Collins, when the restaurant was called Sunset. On the Hippie Fish menu are dishes such as Mykonian mostra, a mixture of rusk, tomatoes, and kopanisticheese, risotto with cuttlefish, and Kydonia cockles.
Open In Google Maps
Mikonos, 846 00, Greece
+302289023547
Visit Website
Give us feedback

Avra in Mykonos Town is just around the corner from the Aegean Maritime Museum and a few minutes’ walk from the Old Port of Mykonos. You can dine inside, on the rooftop terrace, or in a traditional secluded courtyard garden and sample the cuisine of Chef Nikos, who has over two decades of experience preparing excellent Greek cuisine. On the menu, you can sample classic dishes including halloumi wrapped in bacon, wild mushrooms with a squeeze of lemon, and octopus sautéed in white wine to start, and then traditional Greek favourites such as pork fillets served up with honey and thyme sauce, and lamb roasted with fresh rosemary and garlic. 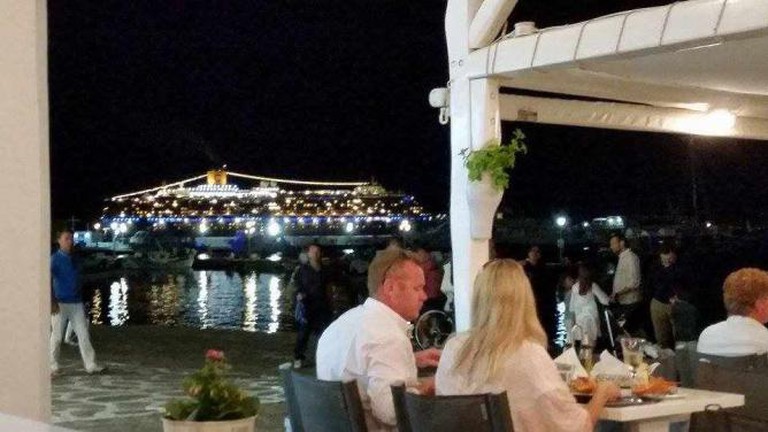 En Plo | Courtesy of En Plo
The Karavaki Restaurant is part of the Vencia Boutique hotel in Mykonos Town. The luxury Vencia Boutique hotel is four-star rated and the restaurant is another to have won a Certificate of Excellence following consistently excellent customer reviews from amongst the users of TripAdvisor. The restaurant is open to all visitors to Mykonos rather than simply the patrons of the hotel, and in the short space of time that Karavaki has been open it has become a favourite amongst locals for special occasions and amongst visitors to Mykonos for late-night dining, where an exceptional meal is required before heading home. The location is set back from the centre of Mykonos Town so provides stunning views from the restaurant terrace out over the Old Town and into the cerulean Aegean.
Open In Google Maps
Mikonos, 846 00, Greece
+302289023665
Visit Website
Give us feedback 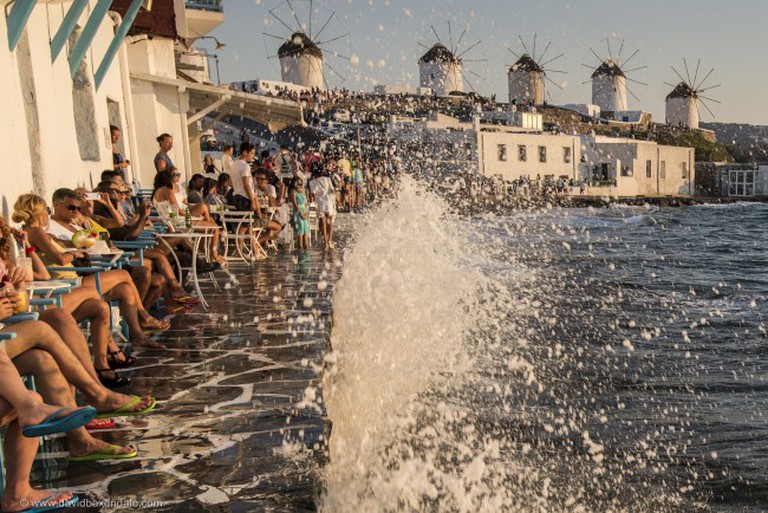 Bars in Little Venice, Mykonos | © David Baxendale/Flickr
Not far from the Folklore Museum of Mykonos, Kastro’s was the leading cocktail bar in Mykonos for 37 years before becoming a restaurant serving first-rate Greek and Mediterranean inspired cuisine. Based in the Little Venice area of Mykonos Town, diners at Kastro’s provides diners with wonderful views of the iconic Mykonos windmills built by the Venetians from the 16th century onwards and now an emblem of the island. The menu features great dishes such as chicken in moschofilero wine, pork escallops served with caramelised strawberries, lobster medallion with black truffle, beef fillet with shrimps in a lobster sauce, and lamb souvlaki with a peppermint sauce.
Open In Google Maps
Mikonos, 846 00, Greece
+302289023072
Visit Website
Give us feedback

Restaurant, Mediterranean, Fusion, Vegetarian, $$$
Facebook
Email
Twitter
Pinterest
Copy link
Share
Map View
M-Eating is set in an old house built early in the 20th century on Kalogera Street in Mykonos Town. The chef and owner Panagiotis Menardos has trained in the kitchens of five-star hotels across the Mediterranean, soaking up the tastes and techniques necessary to produce the finest cuisine. You can dine at M-Eating inside the restaurant, in the wonderful garden, or out on the veranda on summer nights. The cuisine focuses on contemporary approaches to local dishes using excellent fresh produce from both land and sea. On the menu you will find tempting dishes such as red mullet, seabass, croaker fish fillet with a bouillabaisse sauce, veal fillet, pancetta with pork neck, and smoked quail.
Open In Google Maps
10 Kalogera, Mikonos, 846 00, Greece
+302289078550
Visit Website
Give us feedback

Restaurant, Mediterranean, Vegetarian, Vegan
Facebook
Email
Twitter
Pinterest
Copy link
Share
Map View
Olla Mykonos is a smart and sophisticated bar and restaurant in the Little Venice area of Mykonos, in the labyrinthine winding alleys of the Old Town. The cuisine is inspired by Greek and Mediterranean cooking and ranges from starters and entrees, to tapas, pasta, and risotto dishes. Amongst the starters are mini octopus skewers served up with lemon rakomelo liquor, an assortment of mushrooms sautéed with aromatic gorgonzola cheese, or mastelo cheese from Chios and balsamic cream and cherry tomatoes. The entrée courses include seabass with fennel in the traditional Mediterranean way, a mixture of grilled vegetables with Mykonian tirovalia cheese, and beef tagliata with rocket, tomatoes, and Kalamata balsamic vinegar.
Open In Google Maps
Mitropoleos, Mikonos, 846 00, Greece
+302289077177
Give us feedback

Restaurant, Greek
Facebook
Email
Twitter
Pinterest
Copy link
Share
Map View
White Star is the premier restaurant on Mykonos. With a Michelin Star, White Star is run by the celebrated chef Lefteris Lazarou, who provides a new take on classic Greek dishes and an indulgent wine list featuring excellent vintages from Greece, France, and across the New World. The desserts are made by specialist patissier Dimitris Chronopoulos to round off an extravagant dining experience. Located in Lakka Square, not too far from the Old Port of Mykonos, the menu contains curious and innovative dishes including sea urchin salad, soup with cuttlefish ink, salmon with seaweed, cabbage leaves stuffed with minced shrimp, mussels with cauliflower mousse, classic lamb rack, and beef ragout with tagliani cheese.
Open In Google Maps
Mykonos, Greece
Give us feedback
Give us feedback