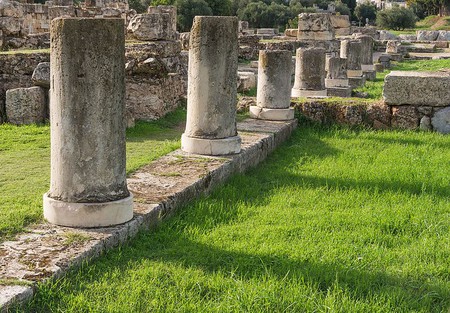 Columns of the Pompeion in the Kerameikos, Athens, Greece | ©Jebulon/WikiCommons

Sappho’s Fragment 31, entitled “Jealousy” by a number of translators, is part of our summer poetry series, dedicated to making the season of vacation lyrical again. As you can expect, the piece is a lovesick lament, an ode to the anxiety of attraction.

Of all of the legendary Ancient Greek poet’s estimated 10,000 works, only 650 survive today, most of which in fragments. Lucky for us, this particular piece was saved by being quoted in an ancient work of criticism, the 1st-century On the Sublime, which described it as the epitome of aesthetics.

Although it was translated many times over the past few centuries, including by the likes of Lords Byron and Tennyson and, more recently, by Anne Carson, not all have been particularly faithful. Sherod Santos’s recent piece however does stand out, not least because of its final verses.

He must feel blooded with the spirit of a god
to sit opposite you and listen, and reply,
to your talk, your laughter, your touching,
breath-held silences. But what I feel, sitting here
and watching you, so stops my heart and binds
my tongue that I can’t think what I might say
to breach the aureole around you there.
It’s as if someone with flint and stone had sparked
a fire that kindled the flesh along my arms
and smothered me in its smoke-blind rush.
Paler than summer grass, it seems
I am already dead, or little short of dying.