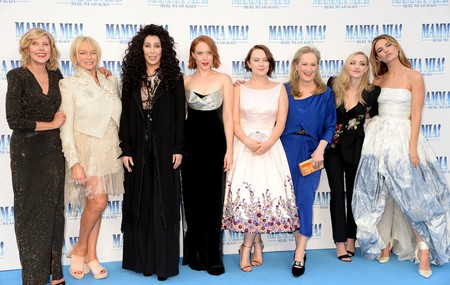 Mamma Mia! Here We Go Again brings Mediterranean island vibes, family feels, and classic ABBA jams to the silver screen this weekend. Not only do ABBA’s timeless disco hits fuel this star-packed sequel, the band’s notorious flamboyant style is inspiring summer trends that promise to be de rigueur all the way into fall.

ABBA has made an indelible mark in fashion. From white platform gogo boots to outrageous bell sleeves, flared bodysuits, and sequin embellishments, ABBA’s contribution to ‘70s and ‘80s fashion embraced excessive glamour that has come to define the aesthetic of contemporary pop music. 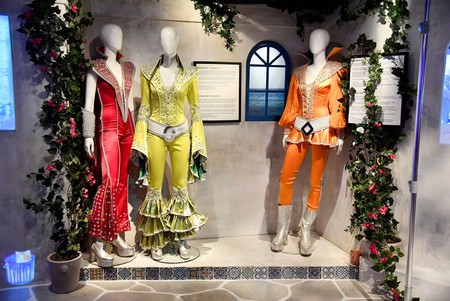 From Roberto Cavalli’s electric prints to Moschino’s colorful body-conscious knitwear and Gucci’s sequined patches that celebrate pop culture iconography, ABBA’s influence on modern designers is not only palpable, but trending. Here are five fabulous bangers from the film’s soundtrack and summer looks they inspire.

Lily James, who plays a young Donna in the ‘70s on the fictional island of Kalokairi (filmed on the Greek island of Skopelos) rocks outrageous flared jeans and a metallic top to perform the title track with her best friends and fellow Dynamos.

Sophie (in a role reprised by Amanda Seyfried) leads the ensemble performance of “Dancing Queen” wearing a crocheted poncho that’s more boho than disco. But who could forget the version that plays when the credits roll in the first film? Donna and the Dynamos (played by Meryl Streep, Christine Baranski, and Julie Walters) in all the sequins and glitter will not be outdone.

3. “The Day Before You Came” — Performed by Meryl Streep

This ballad has fans worried that Donna meets an untimely end in Here We Go Again. (No spoilers here.) Rather than speculate, celebrate the melodic vocals with a look that brings together two totally wearable ABBA-inspired trends: ruffles and platforms.

In the role of Ruby, Donna’s mother (played by Cher) performs the ABBA hit “Fernando” as a duet with love interest, Fernando (played by Andy Garcia). Capture ‘70s glam with a halterneck jumpsuit and rose gold mules that pay homage to the original disco diva herself.

A young Donna (James) shows off her pipes in this classic ABBA ballad. Being young and in love on the coast of the Aegean Sea is something to celebrate. Catch these vibes with a nautical striped bustier inspired by the Bella Donna hotel staff uniforms, paired with a metallic skirt that’s perfect for the discotheque. The unexpected melange of elements capture the whimsical spirit of Kalokairi.