Reasons Why You Should Visit Sifnos, Greece 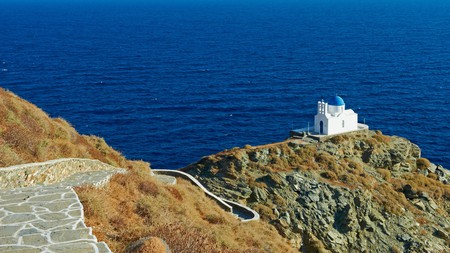 There’s more to humble Sifnos than first meets the eye – or should we say stomach? Known as a foodie’s paradise for decades, traditional Greek food and speciality dishes don’t get better than they do here. Recover from indulgence at one of Sifnos’ many beaches or, if you’re feeling adventurous, try your hand at sailing, snorkelling or horseback riding. Climb the rugged hills to ancient Mycenaean sites, visit a monastery with a miraculous legend and see the most picturesque clifftop church in the Aegean. Finish with a wander around medieval walled village Kastro and you’ve found a Greek adventure as varied, exciting, historic and delicious as they get.

Because it's a foodie paradise

Restaurant, Greek
Facebook
Email
Twitter
Pinterest
Copy link
Share
In 1926, Greece’s first celebrity chef Nikolaos Tselementes wrote a cookbook about Sifnos. Ever since, it’s been on the map as a global destination for foodies – and rightly so. Along with typical Greek dishes like moussaka and souvlaki, always done to perfection, try island specialities like two-day chickpea broth or lamb in red wine. Many of the dishes, including the latter, are cooked in clay pots made uniquely on the island thanks to the clay-based soil. It’s said they give the food a special flavour that you won’t get outside of Sifnos. Travelling in September? Don’t miss the big three-day food festival, named after Tselementes. 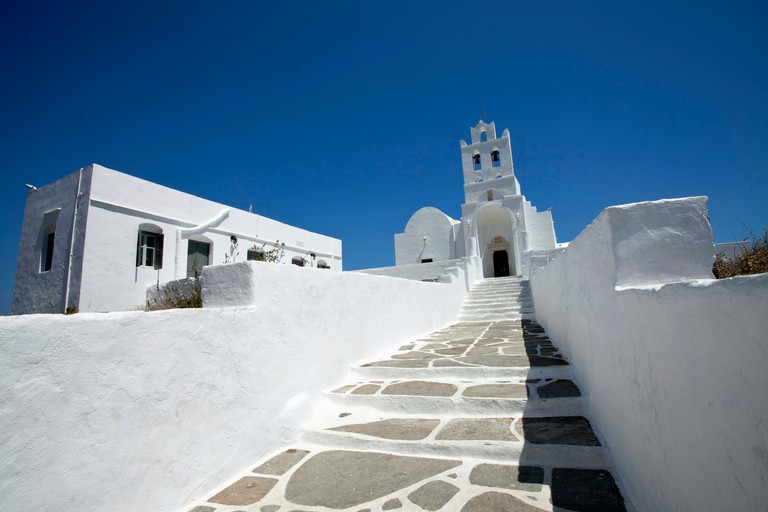 © Eye Ubiquitous / Alamy Stock Photo
On a craggy outcrop overlooking the Aegean, find the peaceful Monastery of Chrissopigi, which originated in the 16th century. It hosts the Panagia icon, which fishermen found floating in the sea and locals believe to be miraculous. Stories say that the monastery is located separately from the island thanks to miracle intervention during a pirate invasion, when a nun prayed to the Virgin Mary for help and the island was split, sending the pirates cascading into the sea. Think of the local legend as you ascend picturesque white steps to the main chapel, waves lapping beside you.

And this picturesque clifftop church

Church
Facebook
Email
Twitter
Pinterest
Copy link
Share
It’s one of the most picturesque sites to be found anywhere in Greece: white, blue-domed Seven Martyrs Church, silhouetted peacefully against the endlessly blue sky. Climb the winding cliffside steps to this humble wonder, pausing to appreciate the sacred beauty before snapping a picture for your memories as waves crash up against the rock. Want to explore more beautiful churches? There are 366 across the island. Pop your head in to see the ornate treasures inside each.

To hike to this medieval walled village

High above Apollonia, find historical Kastro, inhabited since prehistoric times. There are discoveries at every turn once you enter through the lozies (stone arcades that were once sealed for protection) and wind your way through cobbled streets and archways, past ancient pillars and the ruins of medieval castle walls. Admire the white block houses, their balconies and shutters popping with bright colour and their courtyards dripping with flowers. The tavernas, coffee shops and rooms here are authentic and the sea views are just magic.

Though Sifnos only has three museums, they’re all worth a visit. Within Kastro, you’ll find a historic blue-shuttered building that houses the Archeological Museum. Pass through the wide arch to explore findings from island excavations including architectural remains and Hellenic sculptures. Elsewhere, in Apollonia’s main Heroon Square, the Folklore Museum teaches the life and times of Sifnos locals, from the Mycenaean ages until now. It’s fascinating with traditional dress, swords and tools used throughout agricultural history. Lastly, ensure you check out the religious museum at the Monastery of Panagia Vrysiani, near Exabela village – it has rare books and impressive Byzantine icons.

And some of the Cyclades’ best ancient sites 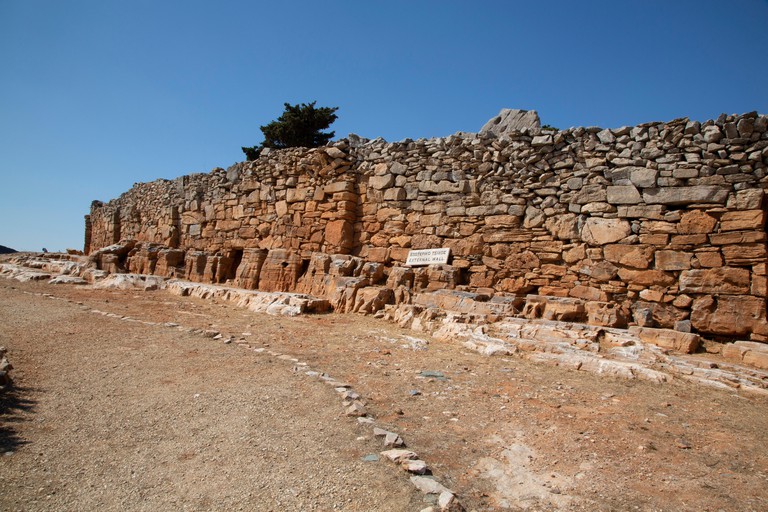 © Niall Ferguson / Alamy Stock Photo
One of the Cyclades’ best Mycenaean sites lies here in humble Sifnos. The Mycenaean Citadel of Agios Andreas was excavated in the 1970s, uncovering a large section of wall that surrounded an acropolis and ruins of five buildings thought to be houses. Learn about the 12th-century BCE settlement at the museum here before soaking up views from the hilltop. Elsewhere, near Platis Gialos Beach, visit the Aspros Pyrgos, or White Tower: one of the remaining watchtowers from a complex series of 57 that protected the island in ancient times.

Because there’s a beach for every mood

Natural Feature
Facebook
Email
Twitter
Pinterest
Copy link
Share
When it comes to beaches, Sifnos has it all. Fancy a day of seaside tavernas, cocktail bars, sunbeds and watersports? Head to the main beach of Platis Gialos, where the atmosphere is as sizzling as the souvlakis. Or if you want remote, raw nature, spend a day at Apokofto: a small, sandy beach with a peaceful monastery view and a couple of unobtrusive tavernas. For something different, head to northern Heronissos, a quaint fishing village with a small tree-dotted beach that has perfect swimming water, a handful of tavernas and a traditional pottery shop selling unique homeware.

To have a big adventure 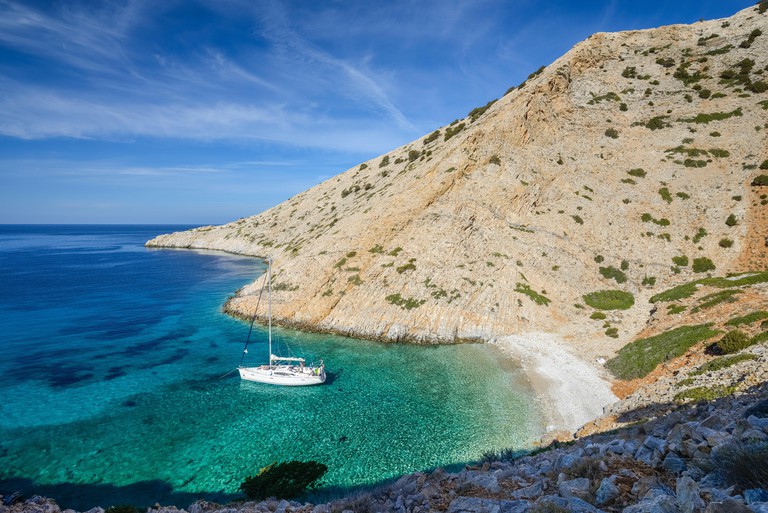 © Image Professionals GmbH / Alamy Stock Photo
Though Sifnos is peaceful, the island is home to its fair share of adventure opportunities. Try sailing the Aegean – you can hire a boat or take a group tour – snorkelling to spot sea life or swimming between coves when safety permits. On land? Sifnos Horseriding will take you on guided mountain trail tours so you can get to know rural Sifnos on horseback. Rest after your adventures with a lazy afternoon in an idyllic taverna.

Watch movies under the stars

Summer in Sifnos sees the return of this gorgeous open-air cinema. At the donation-led Cine Dragatsi in Artemonas, films are shown on a big screen in a picturesque floral courtyard. As the stars sparkle overhead, indulge in cinematic bliss with a cup of local wine in hand and a backdrop of twinkling Sifnos.

There are lots of things to see and do in Sifnos, complete with a hotel stay bookable through Culture Trip. Beyond Sifnos there are some great beach options near Athens, as well as a number of rooftop bars and boutique hotels for your trip.