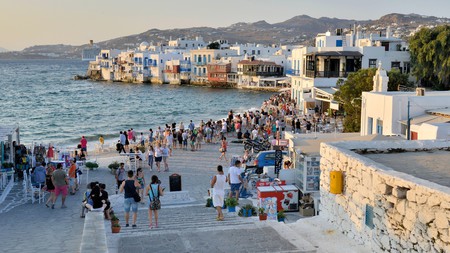 Floating proudly in the Aegean Sea, Mykonos is best known for its intense nightlife, yet its cobbled alleyways hide a myriad of treasures. Between superb sunset views and crystal-clear waters, you’ll find innumerable things to do – from making friends with pelicansto marvelling at whitewashed churches. We round up all the highlights below.

Take a Selfie With the Pelicans or the Windmills

Mykonos’s mascot used to be a friendly pelican named Petros. From the ’60s through to the ’80s, tourists would literally chase down Petros for a picture. Today, even long after the bird’s death in 1985, pelicans are still considered the emblem of the island, making for the ultimate selfie companions. Only three can currently be found on Mykonos, so you’ll need to look hard to spot them. Alternatively, up your Instagram likes with a selfie next to the iconic whitewashed windmills that date from the 16th century. 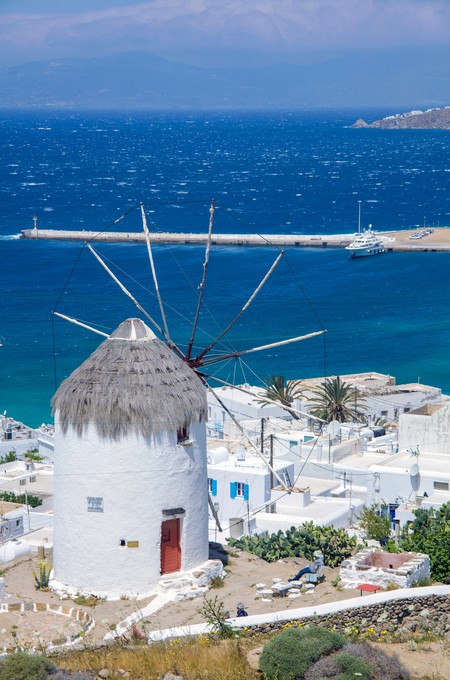 From crowded, vibrant beaches such as Elia and cosmopolitan celeb-magnets such as Psarou, to more isolated spots like Agios Sostis, Mykonos’s shores appeal to all types of travellers. Most of them boast long stretches of white sand, along with deep-blue or turquoise waters. Recline on a lounger, go swimming or try waterskiing – the latter is best enjoyed at Kalafatis Beach. For an extra-secluded experience, pass by Fokos; found on a rocky bay in the northern part of the island, this beach is frequented by a few nudists and, oddly, horses – horse riding is super popular here. 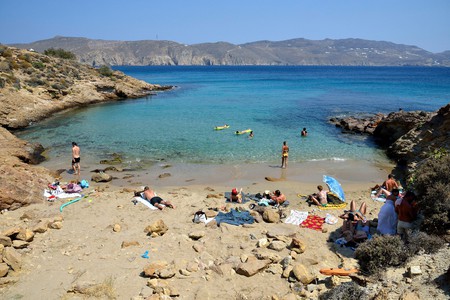 Take in the Sunset Views From Little Venice

Developed by rich merchants and captains during the 18th century, the quaint Alefkantra, also known as Little Venice, is one of the prime spots in Mykonos to enjoy a glorious sunset. The area takes its name from the Italian city thanks to its romantic waterfront, which is lined with elegant white houses and restaurants with cute outdoor seating, and sits less than a metre above sea level. Catch those last rays of sun passing through balconies and wooden window boxes as you’re tucking into a mouthwatering Greek salad – island life at its finest. 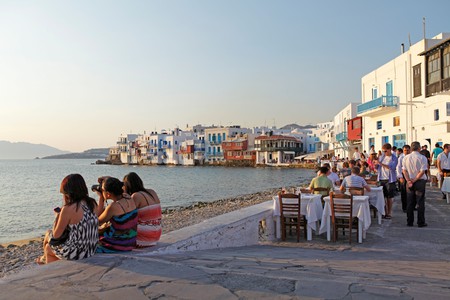 Drink ouzo at the Old Port

A favourite pastime among Mykonians is drinking with friends. Join the locals on Sundays and gather at the picturesque Old Port for some fine ouzo. This strong distilled spirit is usually accompanied by a variety of luscious seafood, known as pikilia. Aim to sit at Bakoya’s, opposite the fish market, which is probably the only traditional tavern left on the island. Local sausages, fried squid and sea urchins are some of the flavourful offerings on the menu. Drink slowly and eat loads, or the ouzo buzz could hit hard. 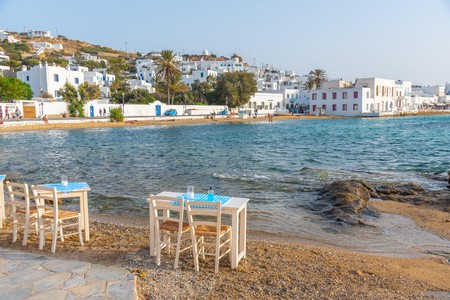 Splurge on a Designer Outfit on Matogianni Street

The heart of the island beats on the cobbled Matogianni Street in Mykonos Town. This is where Greek and international celebrities idle away amid bright bougainvillea and high-end boutiques. Peruse souvenirs or splurge on that irresistible pair of shoes from upscale stores like Louis Vuitton and Hermès and get a taste of the Greek fashion scene at a number of sophisticated local shops. When it’s time for a break, grab a delicious souvlaki to go or stop by the many restaurants and bars which stay open until the early hours. 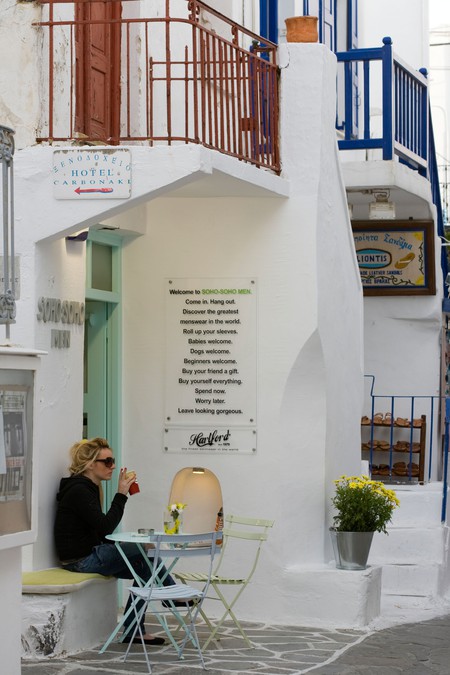 Mykonos might not be famous for its art scene, yet aficionados and creative types are sure to fall in love with the island’s galleries. Founded in 1994 and comprising three rooms, Rarity Gallery is among the greats, displaying paintings, sculpture, photography and installations by international artists – both renowned and up-and-coming. Dio Horia is another to keep in mind; it hosts exhibitions and champions young talent. This gallery also organises events and pop-up installations in other places around Mykonos, too. 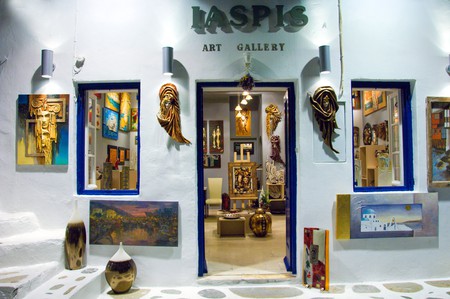 Marvel at the Beautiful Architecture

From the classic Cycladic houses of Mykonos Town to the pretty churches, the island’s architecture is charmingly understated. A great example is the town hall with its minimalist facade. Admire the authentic Mykonian style in Lena’s house – a 19th-century, middle-class home which has been turned into a museum – and make sure to visit the magnificent churches; the whitewashed Monastery of Paleokastro, dotted with red doors, and the all-white Church of Panagia Paraportiani are among the must-sees. 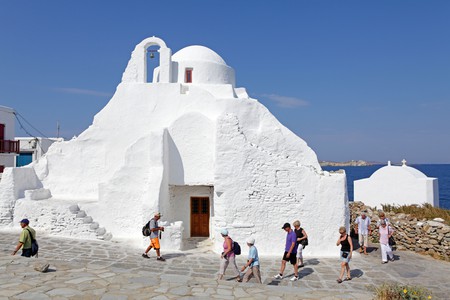 Escape the busy centre and visit one of the oldest and most attractive villages in Mykonos. Sitting a few kilometres away from Mykonos Town, Ano Mera is an excellent choice for those looking to spend some quiet time in the more unspoiled part of the island. Here you can converse with animal-owning locals who cultivate their own products. The crowning jewel of the village is the 16th-century monastery of Panagia Tourliani, which has an elaborate dome and wood carvings crafted by Florentine artists. In the main square next to the monastery you’ll find a number of restaurants; the most popular is To Steki Tou Proedrou. 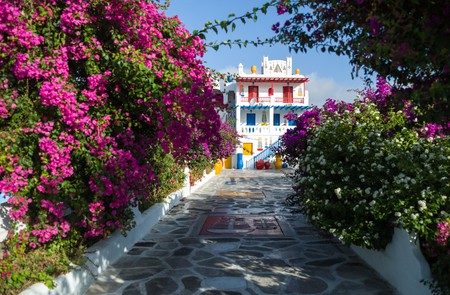 Mykonos has some fascinating history and traditions, worth exploring in its various museums. A few minutes away from Paraportiani, you will find the Folklore Museum, displaying amazing collections of Mykonian furniture and ceramics next to historic manuscripts and photographs. Pass by the Archaeological Museum close to the port for precious vases dating to the 17th century, as well as sculptures, ceramics and jewellery, and don’t miss the Aegean Maritime Museum next to Lena’s house; it exhibits replicas of rowing and sailing ships from prehistoric times until today, along with a rich collection of maps. 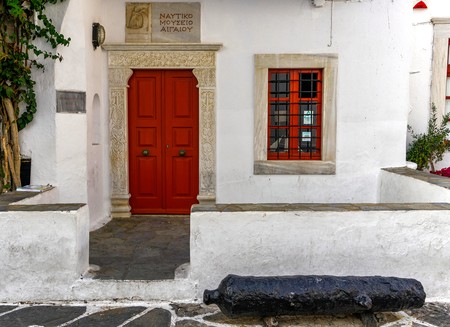 Hop on a Ferry to the Unesco-Listed Delos

For more history, take a day trip from the Old Port to the nearby islet of Delos, a Unesco World Heritage site considered one of the most important archaeological sites in Greece. According to Greek mythology, Delos is the birthplace of two gods, Apollo and Artemis. You are sure to feel the divine spirit when walking among astonishing ancient ruins such as the Terrace of the Lions, dating to the 7th century BCE, or the Temple of the Delians. There’s also a small archaeological museum on site, hosting valuable statues and mosaics that have been recently excavated. 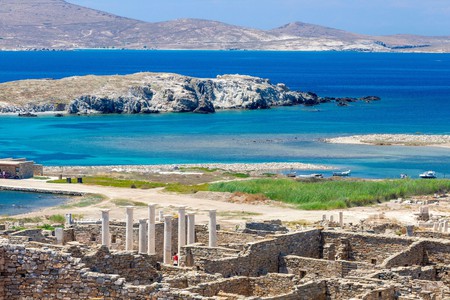