Meet the Artist Who Illustrated Two of the Most Renowned Greek Travel Books, "Mani" and "Roumeli" 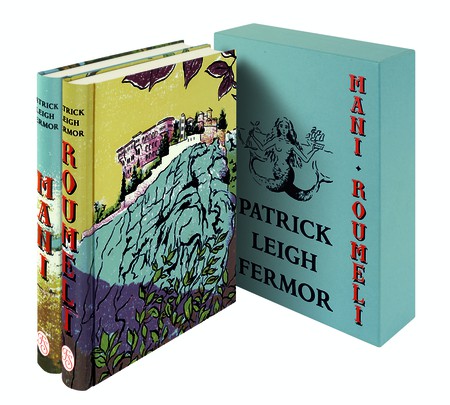 There are two sides to Patrick Leigh Fermor: The scholar, whose prose could often veer on the playful, meticulous and poetic, and whose prodigious memory gave him a unique command of foreign languages (and proved an invaluable help for his autobiographical writing), and the dashing—and daring—adventurer, whose exploits around Europe in the 1930s and in Crete during the war gave him as much human material as any travel writer could ever want. Mani (1958) and Roumeli (1966), accounts of his treks across the two Greek regions, naturally feature his first side more than his second, even if the journeys described are more arduous than your typical Hellenic holiday. The works contain some of Leigh Fermor’s most inspired writing, and their lengthy digressions on subjects as diverse as Byzantine history or traditional dirges make for a uniquely knowledgeable read.

The Folio Society’s beautiful new editions of Mani and Roumeli, sold together under the same slipcased design, include photos from his wife Joan, taken while she accompanied her husband on these trips. They also feature illustrations by Katyuli Lloyd, both inside (between chapters) and on the covers, giving added depth and relief to his writing. Besides her obvious artistic talents, she has the enviable quality of being both Greek and British, as well as intimately familiar with Leigh Fermor’s work. Needless to say, we could not do without contacting her about it. 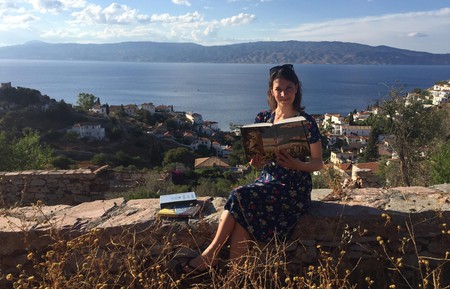 Culture Trip: What attracted you to this project, and how did you get involved?

Katyuli Lloyd: How I got involved in the project was quite serendipitous really. I had been in touch with Sheri Gee, the Art Director at The Folio Society, last April after graduating from my MA. We then met in May at the V&A 2016 Illustrator of the Year Awards (I had been shortlisted for my illustrations to Virginia Woolf’s novel Flush). We had a brief chat and she then wrote in September asking me if I’d heard of Leigh Fermor and whether I would be interested in illustrating his travel books on Greece.

I was instantly attracted to the prospect since the books are about a country which I know well and love, and it’s a sort of adopted homeland for our family. Incidentally, Sheri had no idea about our family connection to Greece, nor of my grandparents’ friendship with him, nor of my own adoration of his writing when she asked me. I had been a big fan of his since my grandmother had taken my sister to stay with him when I was still at school.

CT: Could you tell us a little about that family connection?

KL: Yes, so, my family—originally Russian emigres—have lived in Greece since the 1930s. It was after the war that my grandparents (my Russian grandmother, Lily Mak, and my French grandfather, Christian Heidsieck) and Leigh Fermor met. Athens was small and fairly intimate and was attracting an interesting crowd. Leigh Fermor had of course spent most of the war on Crete.

Around 1948—9, my grandparents decided to move to the island of Ydra (or Hydra) to try to escape some of the memories of the horrors of the war, and to work as potters in the village of Kamini (they were the first “foreigners” to move to and live permanently on the island). It was during the 1950s that Nikos Hadjikyriakos-Ghikas, the Greek painter, gathered together writers and artists to his mansion, high up on the mountain above that same little fishing village. My grandparents spent many a balmy evening on the terraces and in the halls of the Ghika mansion. John Craxton painted there. And it was here that Leigh Fermor wrote much of Mani.

In January 2005, I met Leigh Fermor for lunch at Dumbleton with my sister and Magouche Fielding, Xan Fielding’s widow. His books were still very fresh in my mind, and when I met him and shook his hand, I couldn’t believe that I was shaking the same hand that had held the staff that had steadied him as he walked across Europe! Paddy told us his own memories of our grandparents. 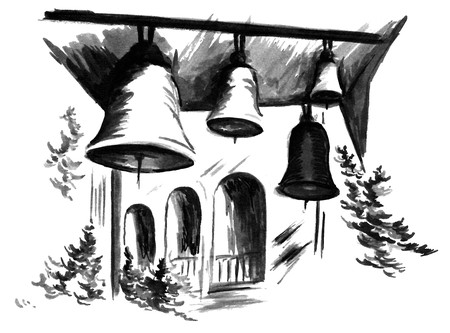 An illustration from Roumeli | Courtesy of Katyuli Lloyd

CT: What do you like most about his writing? Or, rephrased if you prefer: What does his writing mean to you?

KL: I first read Leigh Fermor’s books when I was 17 going on 18, the same age he was when he started his walk across Europe [in 1932—1933, the writer traveled, alone, from the Netherlands to Istanbul]. Therefore, I was naturally attracted to the sense of adventure and spontaneity with which his writing is imbued. His writing is informative, lively, punchy, but it’s also dreamy and anecdotal; his adventures push boundaries and his writing also pushes one’s knowledge of the English language!

CT: How did you go about illustrating these books?

KL: After I was given the commission, I quickly decided that I had to get out to Greece to do some observational drawings. In the short time-frame I had, I couldn’t do both Mani and Roumeli, so I just settled on visiting the Mani. It is also the slightly more location-specific of the two books, since Roumeli deals a lot with the Greek character and also includes a section on Crete, as well as Paddy’s own hopes and fears for Greece’s future.

In the Mani, I made as many sketches as I could, intending to work them up into final artwork back in England. I was also aware that my illustrations were to supplement the beautiful photographs taken by Joan Eyres Monsell (Leigh Fermor’s wife) which, to the uninitiated, give a glimpse of that forbidding and awesome Greek landscape. There is a strong symbiosis between her photographs and Leigh Fermor’s writing, so when I made my trip her images were very much at the forefront of my mind. I didn’t want to illustrate anything that Joan’s photographs already covered, and was conscious of wanting my illustrations to complement her work.

I was also keen to make a map for Mani, for, although John Craxton had made one in 1966 for Roumeli, he hadn’t produced one for Mani in 1958. 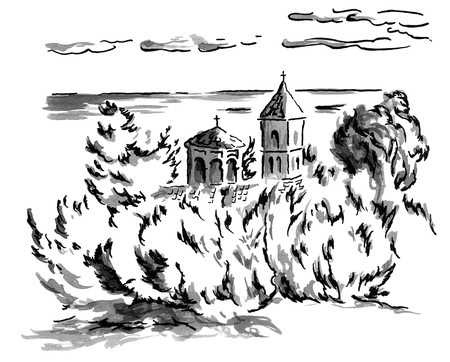 An illustration from Mani | Courtesy of Katyuli Lloyd

CT: What do you think the role of illustration is in a work like this?

KL: Illustrations should, of course, give a glimpse into the heart of the work and make it attractive and accessible before reading—who doesn’t flick through a book in a bookshop and leaf through the glossy illustrated center pages?! However, the role of illustration in works like these is also to open up the books to a new audience and refresh the work. Both Paddy’s writing, as well as Greek history, can be pretty intimidating stuff. I adore John Craxton’s old book covers: they were iconic and synonymous in my mind with everything I associated with Paddy (I’m also privileged enough to say that I also shook his hand—the hand that held the brush that painted the landscape!). But Greece can be such an enigma to people (perhaps it’s down to the alphabet), so I would hope the illustrations break down any misconstrued ideas of the books being unfathomable or cryptic. I wanted to make pretty clear book bindings, easily decipherable landscapes that the reader could feel they had just chanced upon. Along with Joan’s beautiful and recently digitally remastered photographs, I hope the books as a whole are as clear and inviting as mid-August Argo-Saronic waters!

CT: Is there another author, or a particular work, you would really want to work with next?

KL: I like classic literature and the interwar period. I would love to work on some Durrell books, and I’ve had my eye on two in particular, by both Lawrence and Gerald, for a while…