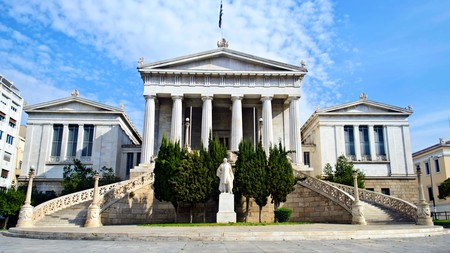 There is no denying that Athens boasts a rich cultural and literary past, but did you know that modern literature also claims a strong foothold in the day-to-day life of the city? Immerse yourself in this literary walk designed to help you discover the landmarks scattered around the Greek capital.

The National Library of Athens

Building, Library
Facebook
Email
Twitter
Pinterest
Copy link
Share
Map View
On Panepistimiou Street in downtown Athens, three stunning buildings – known as the Athenian Trilogy – stand out. The National Library, University of Athens and the Academy are considered to be the heart of the intellectual life in the city. Designed by Danish architect Theophil Hansen – who also designed the Zappeion building – the imposing library is constructed from marble and adorned with Doric columns. Comprising a vast collection of books and archives, it was established in 1902 with the aim of preserving Hellenic intellectual heritage.
Open In Google Maps
32 Omonoia, Athina, 106 79, Greece
+302103382541
Visit Website
Give us feedback

Building
Facebook
Email
Twitter
Pinterest
Copy link
Share
Map View
In the early 1900s, the Stoa Arsakeiou was built and considered part of the Arsakeio Mansion, a two-story building in a Neoclassic style with a touch of eclecticism. The complex is home to many shops and coffee shops, including the Book Archway (Stoa Tou Vivliou), a centre of culture and intellectual pursuits where bookstores offer works from 60 publishing houses – both Greek and foreign – and host many cultural events, such as the annual European Literary Walk.
Open In Google Maps
5 Pesmazoglou, Athina, 105 64, Greece
+302103253989
Visit Website
Give us feedback

Bar, Cafe, Greek
Facebook
Email
Twitter
Pinterest
Copy link
Share
Map View
Poems & Crimes is a cute little bookstore and also the headquarters of Gavriilidis editions. The store has a wide collection of books about art, psychology, Greek and foreign prose, international poetry, philosophy and much more. On the ground floor, there is an all-day café, bar and restaurant where you can comfortably settle with your favourite book and a drink. The second floor is used to host events such exhibitions, readings and music performances.
Open In Google Maps
17 Agias Irinis, Athina, 105 51, Greece
Give us feedback

Restaurant, Cafe, Greek, $$$
Facebook
Email
Twitter
Pinterest
Copy link
Share
Map View
Zonar’s café is one of the most luxurious and iconic dining spots in town. During the 1930s, this was the place to spot the local and international literary elite (such as Jorge Luis Borges, Lawrence Durrell, Evelyn Waugh and Henry Miller), as well as artists, actors and other influential figures. Literary debates were often hosted here and, though it has been entirely renovated, its pre-1950s charm has been perfectly preserved. Zonar’s café maintains its prestigious reputation with artistic flair.
Open In Google Maps
9 Voukourestiou, Athina, 106 71, Greece
+302103251430
Visit Website
Give us feedback

Building, Museum
Facebook
Email
Twitter
Pinterest
Copy link
Share
Map View
The Nikos Hadjikyriakos-Ghika Gallery – often referred to as simply Ghika Gallery – is part of the Benaki Museum. Hadjikyriakos-Ghika was an influential artist, and visiting his studio allows visitors a rare insight into his life. The museum explores literary and cultural history and the studio is no disappointment. Serving as a cultural hub – artistic figures such as John Craxton and Patrick Leigh Fermor and other writers and artists resided here during their visits in Athens – the studio features a particularly impressive one-walled bookshelf which spans two levels.
Open In Google Maps
3 Kriezotou, Athina, 106 71, Greece
+302103615702
Visit Website
Give us feedback

Building
Facebook
Email
Twitter
Pinterest
Copy link
Share
Map View
The 19th century was a golden age for literature in Greece. One foreign figure who contributed largely to this legacy was Austrian diplomat and writer Anton Prokesch von Osten, who was the Austrian ambassador to Athens from 1834 to 1849. With a passion for art in general, von Osten turned the Austrian residence into a centre where European cultural figures visiting Greece could meet to discuss literature, politics, art, history and language. The building, located on Fidiou street, is now in a derelict state, but its contribution to Athenian cultural history should not be underestimated.
Open In Google Maps
Athens, Greece
Give us feedback
Give us feedback