Is This the Oldest Drinking Game in the World? 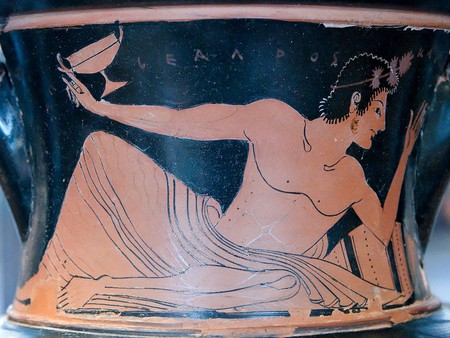 You’re probably familiar with beer pong or flip cup, but have you ever played kottabos? This ancient drinking game was reportedly one of the most popular pastimes during Greek symposia (drinking feasts) and required some level of dexterity.

Symposia were the equivalent of our modern-day cocktail parties, with guests and hosts reclining on low couches instead of standing. They involved conversation, poetry, some sort of entertainment with dancing girls and sometimes even courtesans – and of course, plenty of drinking. But these parties also included some fierce competition, in the form of kottabos, which is probably one of the oldest drinking games known to man.

A symposium scene (fresco taken from the north wall of the Tomb of the Diver (from Paestum, Italy, c. 475 BC)) | © Public Domain / WikiCommons

Thanks to extensive studies and research, historians found out that there were two ways of playing kottabos. The most common form involved participants reclining in a square or circle around the room, competing to knock down a small disc called a plastynx, which was carefully placed on top of a tall metal pole located in the middle of the room. They did this not with darts or balls, but rather by throwing splashes of leftover wine from their kylix, a circular vessel with handles on both sides.

In the second version, which is less common, there was no metal stand; rather, participants, in the same formation, threw the content of their kylix into small dishes floating in a larger bowl of water. The one who managed to fill and, therefore, sink the most small dishes won. Given the shallowness of the kylixes, it is certain that technique was essential in order to win.

From excavation and archaeological finds, historians were able to understand that in both variations of the game, participants would insert two fingers inside one of the vessel’s handles and toss their wine in a motion similar to a javelin throw. 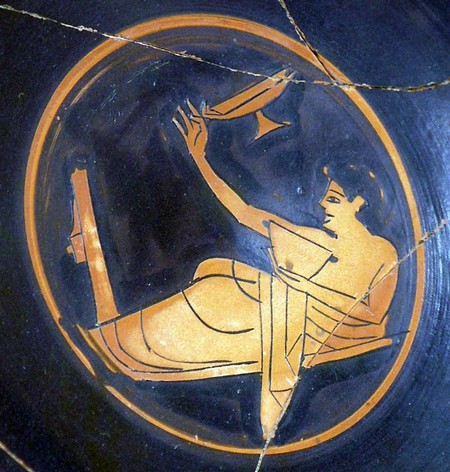 There is no doubt that the game would end in a mess, with all participants (and the floor) probably drenched in wine. However, kottabos was apparently the height of fashion, and wealthy Greeks even went to the extreme of building special rooms in their homes to ensure that all participants were positioned perfectly around the pole.

According to various sources, both men and women, most likely courtesans, played the game. The winner would often get sweets, a small valuable token or sometimes even sexual favours. One particular aspect of the game was that a player would often dedicate their throw to a lover (or someone they desired to be their lover), implying that if successful, they would be lucky in love.

Kottabos’ popularity slowly faded around the 4th BC for unknown reasons, though one could imagine that the cleaning involved must have been a limiting factor.

So, if you want a bit of friendly competition at the next cocktail party you are attending, why not do like the ancient Greeks and play some kottabos?