How to Make the Most of 48 Hours in Zakynthos, Greece 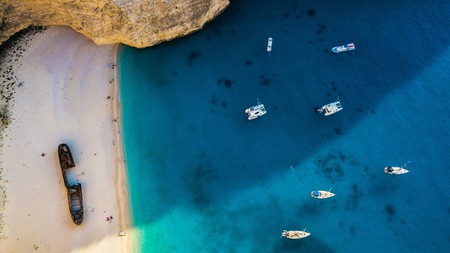 Venetian castles, pristine beaches and buzzing nightlife are just some of the reasons to visit Zakynthos. The Greek island’s abundant history, nature and foodie delights are sure to dazzle even the most demanding traveller. Discover how to make the most of it with this 48-hour guide.

Fiore di Levante (flower of the east), is a very apt description for Zakynthos (also known as Zante). The term was coined by the Venetians, who took over the Ionian island from the 15th to the 18th century. A catastrophic earthquake in 1953 burned most of it to the ground. Zakynthos was rebuilt from scratch and today the island still echoes its former Venetian glory. Two days in Zakynthos include a National Marine Park, charming villages, historic churches and cocktails by the water.

Although local buses will transport you to many of Zakynthos’s highlights for a small fare, renting a car will help you make the most of your time on the island.

Then again, some of Zante’s most impressive beaches can only be accessed by boat. These include Navagio, which should be at the top of your to-do list. Its main attraction, the abandoned MV Panagiotis ship, stands in awe-inspiring contrast with the scenery of the sandy shore, dramatic cliffs and turquoise waters. To get there, either join a boat tour from Zakynthos town or Agios Nikolaos, or rent a boat from Porto Vromi. The former will keep you busy for eight hours straight, along with a visit to the marvellous Blue Caves, a series of sea caves ideal for seabed exploration. Either way, make sure you pack a light snack as the beach is secluded and there’s not much scope for buying supplies there.

If you make it back to town at a reasonable hour, have a late lunch at the traditional Zakynthian taverna Varkarola. Listen to authentic Zakynthian songs called kantades, while enjoying a variety of traditional dishes prepared by chef Lily. Don’t forget to try Tsi Nonas (grandma’s in the Ionian dialect), the restaurant’s signature dish. “It is, in fact, our grandmother’s recipe. People love the dish thanks to the delicious, tender meat,” says owner Haris Amanatidis.

After your meal, take a walk around town and marvel at some of the island’s Venetian-style buildings. One such example is Agios Dionysios, Zakynthos’s biggest and most-ornate church. Dedicated to Saint Dionysios, the island’s patron, the church houses the saint’s remains, while the museum next door details his life and the church’s long history.

On a hill right above Zakynthos town, lies the island’s Venetian castle. It’s worth admiring what’s left of the landmark, which stands as a vivid reminder of the time Zante spent under Venetian rule. The hill is home to the quaint village of Bochali, perfect for long walks among the pine trees or for gazing at the bright-lit port of Zakynthos from up high. A few steps further, Strani Hill is where acclaimed poet Dionysios Solomos was inspired to write Greece’s national anthem, upon hearing the cannonades coming from the city of Mesologgi during the Greek War of Independence. Take in the splendid views at dusk and you might just feel as inspired as he did.

You can’t leave Bochali without tasting the famous desserts at Latas. This traditional café, in operation for more than six decades, serves all kinds of local delicacies, including the Zakynthian frygania – made with layers of lemon-and-cinnamon-infused rusk, vanilla cream and whipped cream.

Night – Sip cocktails by the sea

If you choose to stay in Bochali a bit longer, have a drink on the hill, at the super-chic Movida. Apart from breathtaking views towards the town, the bar-restaurant serves some of the most amazing cocktails on the island, such as its Smoked Vida blend, a mix of Del Maguey Mezcal Vida, fresh lime, cinnamon syrup, mango, agave and mint.

Alternatively, have a strawberry daiquiri by the sea at Freddie’s beach bar in Tsilivi, only a quick drive away.

Morning – Start the day with pancakes and culture

Start your day with breakfast in the centre of Zakynthos Town. An indulgent plate of pancakes at Base Café, complete with irresistible toppings such as white chocolate and strawberries, will be just what you need before diving deep into the island’s history.

Your journey back in time begins at Agios Markos Square. The tree of liberty was once planted here, symbolising the island’s liberation from Venice. This is where the Museum of D Solomos and Eminent People of Zakynthos also stands, housing the mausoleum of poets Dionysios Solomos and Andreas Kalvos, along with personal items belonging to distinguished Zakynthians. “It features invaluable exhibits, such as Solomos’s imposing statue in the entrance hall, the poet’s original manuscripts and works by sculptor Georgios Vroutos,” says the museum’s director, archaeologist Katerina Demeti.

A few feet away, the Byzantine Museum of Zakynthos at Solomos Square displays important Byzantine artefacts, as well as a mock-up of pre-earthquake Zakynthos. If you’re craving coffee or a quick snack, the square boasts a handful of Italian-style cafés. Remember to walk down the commercial Alexandrou Rwma street, if only for some window shopping, before going to the beach.

Afternoon – Hang out with the sea turtles

Gerakas Beach is, no doubt, worth the 30-minute drive from Solomos Square. Part of the protected National Marine Park of Zakynthos, Gerakas is where you can witness the hatching of a loggerhead sea turtle, while lying on the golden sand. Grab a bite at one of the restaurants nearby or, better yet, get in the car and brave one last ride to somewhere much more exciting.

On the other side of Laganas Bay, there’s a dreamy little island, perfect for relaxation. But before crossing the bridge that connects Zakynthos to the islet of Agios Sostis, it’s worth exploring the seaside resort of the same name. The area is easily accessible by bus, with plenty of restaurants to choose from. To recharge, pop by Scloubou’s Tavern for an early dinner and try the exquisite rabbit in red sauce.

Right before crossing that bridge to paradise, make one last stop at Andriani Kladi’s Pottery Studio & Cafe in the nearby village of Lithakia. Feel free to admire Andriani’s unique ceramics, before tasting her sister Sissi’s homemade frygania. “I’ve been making ceramics for 23 years now,” says Andriani. “But it can get quite lonely, so I wanted to create a space where I could interact with people while sharing my art. That way, you can look at the pieces or sit at the café, or even take a ceramics class if you wish.”

A natural extension of Laganas, connected to it via a quaint wooden bridge, the islet of Agios Sostis was part of the mainland until 1633, when it got separated by a strong earthquake. Today, it remains one of the most charming parts of Zakynthos, stunning visitors with its lush vegetation and clear waters. A variety of bars, cafés and restaurants make it ideal for a fun night out. End your day with a cocktail on the beach and join a DJ party at Cameo Island club, surrounded by astounding nature.