How Pirates Shaped the Design of This Greek Island 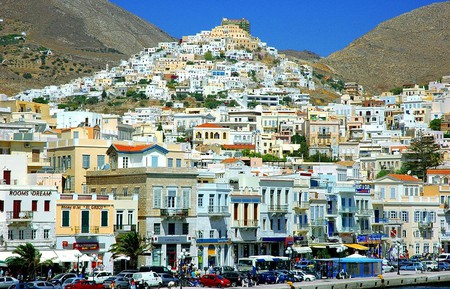 The Greek islands may be famous for their iconic architecture and beautiful scenery, but some of them have a more sinister history than others. Culture Trip explores how pirates invaded the Greek island of Syros and helped shape the way that it looks today.

‘There is not much to see and even less to know historically’ – this was Lawrence Durrell’s summary of the Cycladic island of Syros in his survey of the Greek islands. Unimpressed by the town, Ermoupolis, which he deemed to be ‘bald and graceless’, he hopped back onto the ferry and quickly moved on to explore other Cycladic islands. Life or history beyond the port of Syros was barely mentioned.

Poor Durrell – in his haste to cast judgement on the island, the revered author failed to look beyond the obvious. Instead of looking at who the island inspired (Byron and Melville, amongst others), he should have investigated how it came into existence in the first place. 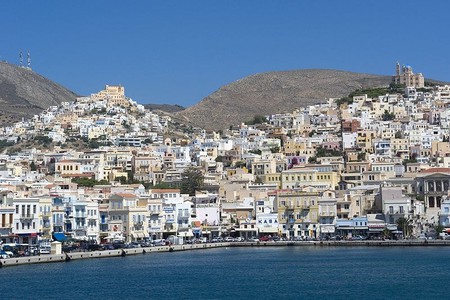 Indeed, Syros is an island of great and important cultural significance in Greece. Renowned for its central role in the maritime industry, it was first used by the Venetians as a primary port for trade routes to the East. Even today, from Syros, visitors can explore the wealth of the Aegean while still being connected to the mainland.

On arrival at the island’s port, visitors are immediately confronted with two distinguished hills. To the left lies Ano Syros, headed by a Catholic Church. To the right is the Orthodox Church. Ano Syros is one of the island’s oldest areas, full of traditional Greek winding alleyways and whitewashed houses. It is unlike the main Ermoupolis town and exists for a fascinating reason: pirates.

Although the Aegean Sea today is full of super yachts and commercial fleets ferrying tourists between Instagrammable whitewashed villages, for centuries, pirates terrorised these same waters. The constant invasions became the scourge of the Cyclades, and neighbouring islands such as Naxos even paid a pirate tax to protect the inhabitants. 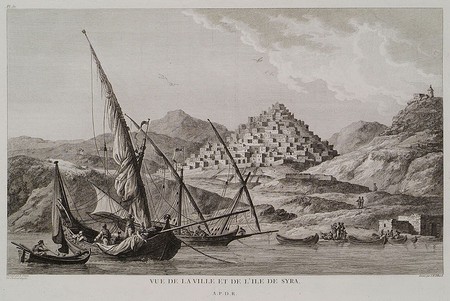 The port of Syros in the 1700s, before Ermoupolis became the main town | © Marie-Gabriel-Florent-Auguste Comte de Choiseul-Gouffier / WikiCommons

Syros was an island that found itself constantly under attack by Saracen pirates. To counter the constant attacks, the islanders moved farther up the hill, creating a fortified settlement that would protect them from unwanted visitors.

At first, it was simply that. However, when the Venetians arrived in 1200, they created Ano Syros as it is now: an amphitheatre-type village full of narrow winding streets where villagers could hide from their enemies. Ano Syros had main points of entry that could be sealed against invaders too. From Ano Syros, you can survey the whole harbour and surrounding area, making the hill an excellent vantage point from which to spot incoming pirates. Even today, visitors can only navigate the windy cobbled passageways by foot. When walking through these streets in the soft afternoon light, it’s easy to revel in the tranquillity of the place. The magic of this historic safe haven has continued to be preserved. 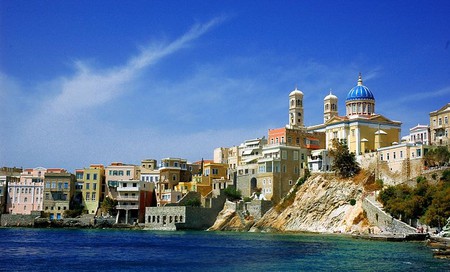 It wasn’t until the 1770s that Syros was transformed into the island visitors are familiar with today. The island at the time was under the patronage of Sultan Abdul Hamid, who gave Syros as a present to his niece who instilled economic prosperity. Fifty years later during the Greek War of Independence, refugees from islands across the southern Aegean arrived in Syros and settled underneath Ano Syros, giving birth to the modern and prosperous town of Ermoupolis. The seafront was even filled in to make more room for houses.

So, next time you visit Syros, beware of Durrell’s flippant judgement. Instead, explore the full extent of the island’s history – and make sure to sample the delicious food on offer at the Ano Syros tavernas while you do.