‘If something is well-made, it grows and ages with you; it becomes part of you. Once we begin appreciating better quality, the need for novelty wears off,’ posits Stamos Fafalios over email. It’s the end of the Sustainable Fashion event in Athens, and I’ve contacted him to find out how Greek designers are coping during these austere times.

Fafalios is director of Atopos cvc, an Athenian organisation that specialises in archiving and curating strange or unusual pieces, with an emphasis on exploring the relationship between fashion and the human form throughout the ages. As such, sustainability has come to play a central role in their thinking, and it’s an idea that is also fast infiltrating the creative mindset of designers in Greece.

The new approach is surprising, because the numbers for Greece’s economy aren’t good. Sustainable manufacturing typically demands funding and finance, and in spite of minor growth in the latter part of 2016, the unemployment rate in the country is at 23% (the highest in Europe); the national debt stands at €320 billion (around £271 billion); consumption and exports have fallen by 6.4% and 7.2% in the second quarter of 2016; and since 2009, the poorest 20% of Greece’s 11 million inhabitants have experienced a reduction in their disposable income of 42%. It’s hardly an optimistic scenario. Businesses in Greece typically need fast cash, and slow, local fashion has historically not delivered substantial or immediate revenue. Yet in the face of entropy, a sustainable approach to fashion in Greece is offering an interesting and adaptable economic model that could set an agenda for long-term economic recovery.

Fashion in flux: the challenges of austerity

Fashion was one of the first industries to suffer when the crisis began in 2009. In 2011, production of clothing had dropped by 25.8% as consumers stopped buying, and the retail industry rapidly shrank. In 2017, the situation looks similarly fragile; in particular the widening gulf between prices charged by brands and low consumer discretionary spending. This is unsurprising in light of the 2016 austerity measures, which included an increase in VAT to 24% (making this the sixth VAT revision since 2010, where it was originally 19%). Money for nonessential items is scarce. 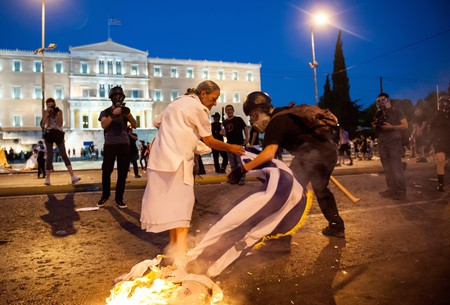 In retail and fashion design, the burden has fallen on small businesses that struggled to adapt to changing circumstance. Unlike major global conglomerates such as Zara and H&M, small retailers do not have the international reach to swallow losses and sustain their operations during difficult times. Similarly, while H&M has invested in its online offer in Greece, independent stores that lack a digital presence or savvy marketing departments find themselves at a nearly insurmountable disadvantage.

Externally, the fashion industry (along with the rest of the industries in Greece) is also struggling to show that the country is open for business. While domestic policies currently pursued by the government are not favourable to external trade, the media also performs a negative role by presenting a necessary yet singular narrative of instability and decline – unhelpful when trying to attract foreign business. Tonia Fouseki, CEO of Athens Xclusive Designers Week, says via email, ‘Currently there has been a worldwide ‘bombarding’ by the international media regarding the intense Greek crisis and economic issues. As a result, the effects on the national fashion industry have been dire, driving several designers to lower down their activity.’ 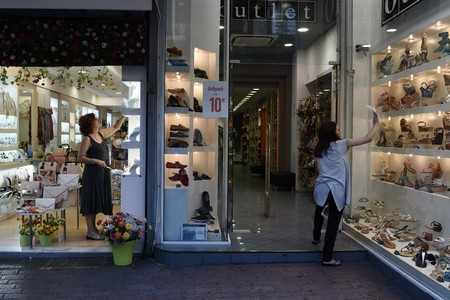 Slow shifts in this sphere are beginning to unfold. One of Germany’s biggest contemporary art fairs, Documenta 14, will also take place in Athens for the first time this year with the title ‘Learning from Athens’. The move is a welcome recognition of the capital’s creative potential – and one that could shape a new Greek narrative in the foreign press. ‘Greece is a traumatised area,’ explains Yorgos Tzirtzilakis, a consultant at the DESTE Foundation for Contemporary Art. ‘The issue now is how to utilise this sudden interest in the country so that we offer something new and not just rely on this notion of trauma. That is the real challenge.’ Indeed, the sudden interest could just as quickly fade, creating an ‘Olympic Effect’ – that is, a sudden economic depression after an artificial stimulus – with long-term consequences more damaging than any short-term positive effects.

Yet within this fragile nexus of designers, retailers and customers, change and innovation are happening. Greek fashion is beginning to pivot towards a more local, sustainable model that could revolutionise the way in which businesses progress as austerity continues. ‘The current economic climate in Greece has encouraged a new, young, and creative talent to emerge, not just in fashion but also in other disciplines,’ Stamos Fafalios explains later on in our exchange. ‘Less greed, more sustainability, more ecological awareness, and much better working conditions mean that ‘fashion’ might begin doing itself a service.’

Whether or not fashion has the ability to self-soothe will come down to the capacity of designers, retailers, customers and fashion executives to adopt a sustainable model across multiple platforms and parts of the industry, via a two-pronged approach. First a system that takes greater social – and environmental – responsibility for the impact it has on itself must be introduced: to pay workers fairly, to provide healthy working conditions, and to recycle and source materials that don’t pollute the environment. The second is economic sustainability: to create a system which uses a sustainable mindset to feed financial resources back into the economy, thereby engendering economic growth amongst local communities in Greece.

Made in Greece and the Fashion Revolution: is Greece’s future sustainable?

In many ways, it’s already happening. At Athens Xclusive Designers Week (AXDW), which takes place from the end of March to the beginning of April after the ‘star’ shows (New York, London, Milan, Paris), over 25,000 visitors descend on central Athens to witness the latest in domestic talent – and also to raise money for charity. Now in its 11th year, AXDW fosters the idea of ‘fashion with a conscience’, and money raised through the combination of catwalk shows, talks, and events has been donated to charities such as Make-A-Wish Foundation, Women in Need, and the Pink Ribbon Foundation.

While AXDW represents fashion as a service in a charitable form, the event also showcases the latest in Greek fashion design and highlights new ways designers are thinking. Tonia Fouseki tells me that the economic crisis ‘has led Greek designers to re-evaluate the way they work and to make greater efforts to penetrate not only Greek but also the international fashion markets.’ She adds, ‘Designers and successful brands are seeking creative and inspirational methods, managing on several occasions to even create an international reputation by creations that capitalise on traditional Greek aesthetics and history, as well as local fabrics and textiles like silk, rich colours, and even traditional methods of garment production.’

Where designers have identified demand for ancient techniques and traditional aesthetics, businesses are thriving. Greece’s notable designer exports include Mary Katrantzou, Ancient Greek Sandals, Angelos Bratis, Zeus + Dione, and Sophia Kokosalaki, all of whom draw aesthetic and design inspiration from their heritage. ‘It was evident to me that connecting the sandals to ancient Greece would be a great idea,’ says Nikolas Minoglou, co-founder of Ancient Greek Sandals. ‘It’s in the brand’s DNA to use the traditional techniques of sandal-making that have existed for centuries in Greece,’ adds Christina Martini, the other co-founder of the brand. Now sold around the world, the success of Ancient Greek Sandals highlights the effectiveness of marrying local skills with international audiences.

Zeus + Dione, a relatively new brand borne out of the economic crisis, is another example. ‘Every day another shop would close, there would be stories of frustrated people in the papers, of jobs being lost,’ says co-founder Mareva Grabowski of the brand’s origins. ‘It was the end of the world as we knew it.’ Instead of despairing, the pair looked to traditional techniques as a means of reviving the Made in Greece ethos. Today they work with artisans from across the country: silk is crafted for the brand in Soufli, shirts are embroidered in Argos and Metsovo, and dresses are knitted in the Cyclades and Attica. ‘We could have turned to foreign manufacturers,’ adds fellow founder Dimitra Kolotoura. ‘It would have been easier and cheaper to produce our products in other countries, but that was not what we wished for. We wanted to create jobs in Greece, and at the same time, promote the traditional know-how of artisans.’

Greek consumers’ desire for clothing value can be seen in the fact that jeans, children’s clothes, and sportswear have, according to reports from Euromonitor, been the most resilient in terms of sales recently. The volume of denim production actually rose by 4% in 2016. While Greek shoppers may look to make an impulse ‘fashion’ purchase from a cheap high-street store, they also want clothes that will deliver longevity and versatility. ‘[Greek consumers] have become more selective and conscious of ‘brand equity’,’ Tonia Fouseki notes. As such, the new generation of designers can use locally-made designs to speak to consumers in the domestic market – those who are willing to invest in quality, but still want value. And that’s a rare combination among fast-fashion brands. 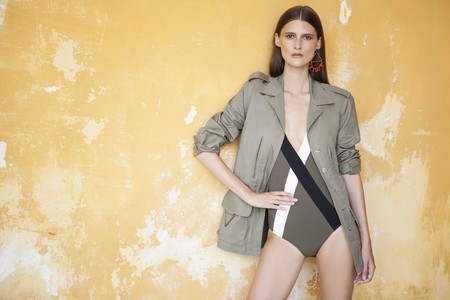 Local production also enables Greek brands to offer an authenticity edge over its competitors – a brand advantage among young consumers who value sincerity as much as quality.

This combination of a local, sustainable model coupled with a nimble way of distributing narrative means that Greek fashion is poised to rejuvenate a flagging industry – Zeus + Dione are already growing 100%–110% year on year, according to the Guardian – and emerge as a model for others to follow.

In the Greek food industry, for example, this would involve adopting an approach that prioritises using local produce in restaurants, a mindset that has already been adopted by chefs such as Alexandros Kardasis of Athiri, a Michelin-starred restaurant that mixes traditional Greek cuisine with an innovative approach to local ingredients. The menu boasts only local Greek wines, the extra-virgin olive oil comes from ancient Olympia in the Peloponnese, and their suckling pig arrives directly from Aggelopoulos Farm in Koropi. Other businesses have started even earlier in the production chain; Radiki encourages restaurants to buy locally and experiment with new seasonal greens. ‘Every human action must have the most minimum ecological impact possible,’ says Radiki in their company manifesto, insisting that timely consumption must be the highest priority.

Thus the Greek fashion industry finds itself in an exciting position, at a time when expectations were wholly to the contrary. ‘Our stoic philosophers used to say “ouden kako amiges kale”,’ Fouseki muses, ‘or, “everything bad might always bring something good in the end.” ’