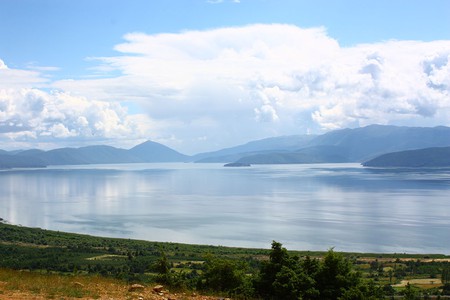 Lake Prespa, which lies on the borders of Greece, FYROM and Albania. View from Slivnica Monastery in FYROM | © Rašo/WikiCommons

After nearly 30 years of disagreement, Athens and Skopje seem to have finally reached an agreement on the name of FYROM (the former Yugoslav Republic of Macedonia), a move that allows the country to enter the EU and NATO. But don’t celebrate just yet, the road to ending this three-decade-long dispute includes more than a few obstacles.

The origin of the issue

When FYROM got its independence from the former Yugoslavia in 1991, the small country chose the name Macedonia, which angered Greece who has its own region of the same name in the northern part of its territory. The name, according to Greece, reveals FYROM’s territorial ambitions, who since then has been blocking its adhesion to NATO and the EU. In 1995, a temporary agreement was reached under the auspices of the United Nations, with Macedonia taking the name Former Yugoslav Republic of Macedonia, or FYROM.

On June 12 2018, the two nations seemed to reach an agreement on the name the Republic of North Macedonia, or Severna Makedonija in Macedonian. As Macedonian Prime Minister Zoran Zaev announced during a live television broadcast, the two countries have finally agreed on a name, after 27 years of dispute.

Hopefully, by the end of June of this year, FYROM’s inclusion within the European Union may be discussed at the European Summit, as the agreement is thought to be concluded by the end of this week. Besides the new name, it has been established that FYROM’s spoken language would be called Macedonian, with a side note stipulating that the language has Slavic origins. Furthermore, a change to the Macedonian Constitution will be necessary, more specifically the text concerning the protection of Macedonian minorities beyond the territorial boundaries. Now, the Macedonian Parliament must ratify the agreement; which may be harder than it seems, given the presence of strong nationalists within the chamber. After this ratification, a national referendum will be held in FYROM so that the citizens may vote on the proposed name.

On the Greek side, once the agreement has been ratified, the Greek government will send a letter to the EU and NATO to show its support for the adhesion of the Republic of North Macedonia to the two international organizations. The decision has already angered many Greek nationals, who manifested across the country a few months ago against the use of the name Macedonia. However, Greek politician Aléxis Tsipras has praised the event in a recent speech, stating that it was a great victory and a historic moment for the two nations.

While reaching a solution that fully satisfies both nations may be difficult, we can only hope that this long dispute may be over soon – bringing positive outcomes on both sides.