Feasting in Greece: Why Thessaloniki Should Be Your Next Culinary Getaway 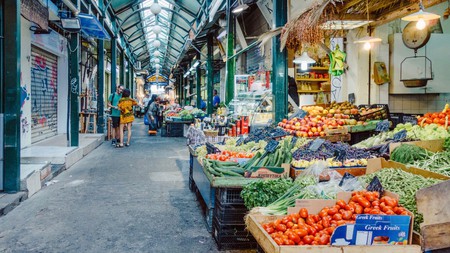 It may be Greece’s second city, but it’s first on the list for foodies – here’s why Thessaloniki’s culinary scene is not to be missed.

“The crisis definitely helped in a way,” says Danai Spania. It’s not something you often hear about a financial disaster. But Spania, a culinary tour guide at Grekaddict in Thessaloniki, sees a shining future for her city despite the economic struggles it has endured. “Personally, I grew up with a positive mindset and I feel that here, there is a small change for the better.”

The change she’s referring to is on the city’s ever-evolving culinary scene, and how Thessaloniki’s revitalised version of Greek food has been pulling in visitors from around the world. Its diverse cultural heritage, proximity to the sea and ingenious chefs have made Greece’s second city far from second best. Traditional street food such as gyros and souvlaki are treated with all the reverence of a gourmet meal, and restaurants continually refine, reinvent and reimagine Greek staples. 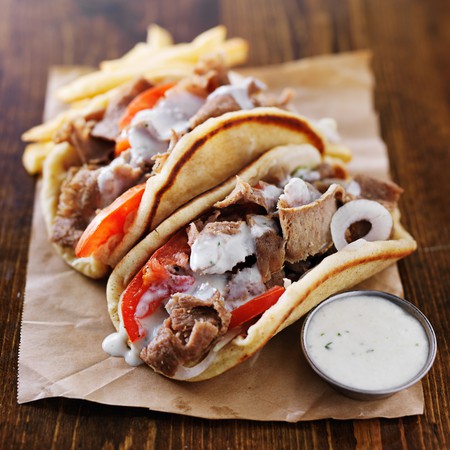 “Thessaloniki is considered to be the gastronomic capital of Greece,” Spania says. “It’s a crossroads of flavours and a metropolis of tastes. Nowhere else in Greece can someone find so many different flavours combined on the same table.” The city hasn’t been awarded its first Michelin star yet, but it’s surely only a matter of time.

“Food is an intrinsic part of what shapes Thessaloniki’s identity,” says Thodoris Skoutakis of Marketing Greece. “The city has been influenced by successive conquerors and the arrival of refugees of various origins and from different places. The coexistence of the Turkish, Jewish, French and Greek communities resulted in a multitude of dishes; the city cuisine borrows techniques, ideas, products and moods.”

Through Thessaloniki’s storied past and intermingling of the city’s diverse communities, a distinct cuisine has been born, focussing on local ingredients and authentic flavours. On the waterfront, restaurants such as Mamalouka make use of Greece’s abundance of fresh fish to serve up contemporary cuisine. 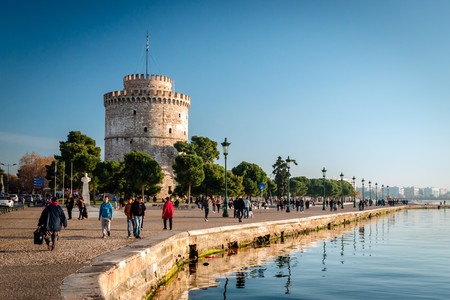 But the question remains: what, exactly, should you eat when visiting Thessaloniki? If you’re looking for a quick snack on the go, opt for a koulouri. A type of bread ring, it’s usually covered in sesame seeds, although bakeries around Thessaloniki sometimes experiment with varieties studded with raisins or nuts.

“For me, Thessaloniki is pastry paradise,” says Spania, and one dish that’s definitely best eaten sitting down, with plenty of napkins at hand, is bougatsa. This flaky pastry comes in sweet and savoury varieties, featuring myriad fillings such as cheese, mince and sweet cream. “There are so many flavours; my advice would be to get half a portion with feta and half with custard cream,” Spania suggests. Follow your nose to find the freshest, and closest, bougatsa place – the most popular is Bougatsa Giannis, near the White Tower. However, wherever you go, make sure you go early, as the shops usually bake a batch every morning and run out quickly. 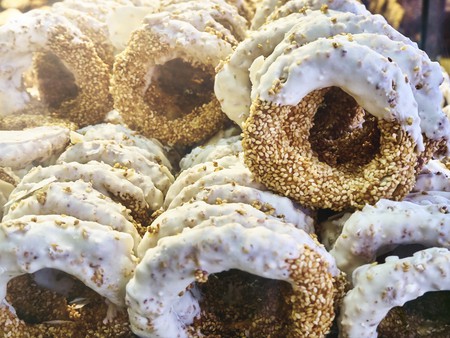 When eating out, Spania recommends forgoing a main of your own and instead opting to share dishes. “You should definitely go to some mezedopolio [mezze place], ordering six or more small plates with a group of friends, along with some wine, tsipouro [a type of Greek spirit] or retsina [a type of Greek wine infused with pine resin].” Eating is a communal experience in Thessaloniki; head to a bar such as Mezen and gather your nearest and dearest to sample as many tiny plates as you can of stunning Greek cuisine.

And make sure you leave room for dessert; baklava and halva are both ubiquitous in the city, and a bite or two of each will provide a satisfying finishing touch to a good meal. Trigona (triangles of syrup-drenched, cream-filled, crunchy pastry) should only be attempted if you’ve got a particularly sweet tooth, or are able to share with a friend. Head to Trigona Elenidis to try what many believe to be the original – and certainly some of the best – trigona in the city, but only if you’re ready for the cream-induced stupor that will follow. 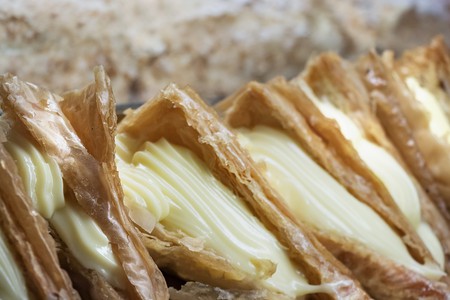 If you’re looking for an edible souvenir to take a taste of Thessaloniki home with you, you can’t go wrong with Olicatessen. This chic shop is based in Ano Ladadika, one of the city’s oldest neighbourhoods, and harkens back to the days before the supermarkets took over. Owner Alexandros Stefanidis focusses on sourcing artisanal products from across Greece, supporting small businesses and showcasing authentic ingredients. Jars of locally produced honey and olive oil shine on the shelves among pottery cups and plates, all crafted by Greek artisans. Interestingly, many of the artisans who fill the shop’s shelves had previous careers as bankers, lawyers and businesspeople before the economic crisis hit and offered them a chance (as Spania suggests) to switch careers and follow their culinary passions. Jars of dolmades (stuffed vine leaves), packets of Greek seasoning and teas to aid aches, pains and insomnia all make great gifts that will leave you remembering Thessaloniki long after the taste of bougatsa fades. 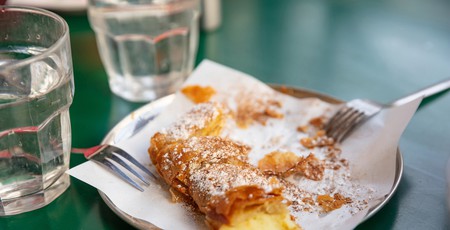