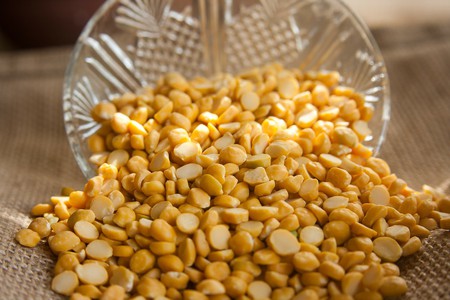 Various cultures around the world have a version of puréed beans or legumes. Lebanon, Israel, Egypt and the Middle East have hummus, bissara is highly celebrated in Morocco, and the national bean dip in India is dal. In Greece, the star is fava, a hummus-like purée made with yellow split beans, which does not actually contain fava beans. Here is a bit more about this tasty and creamy dish.

Fava, a common item in a taverna, is a delicious purée of split peas served alongside meat, fish or vegetable dishes. People often mistake it for a purée of fava beans, also known as broad beans or English beans. And though it is possible to do a purée with broad beans, it doesn’t taste as good as fava.

I think old gets a bad rap these days. There is something so homey about using the same colander my mom used for my entire childhood. #splitpeas #fall #handmedowns #reduce #reuse #recycle #fairtradebrigade

Looking like a cross between a lentil and a pea, split peas have been cultivated since Antiquity. And for good reason: these small peas are packed with isoflavones, vitamin B, protein, soluble fiber and virtually no fat. It is said that the legume was cultivated in Greece as early as 6000 BC and that it was common to see vendors in the streets of Athens vending hot split pea soup.

#yellowsplitpeas ready to be milled.

Nowadays, the split pea is grown everywhere in the country, but Santorini is most famous for their cultivation. Indeed, according to excavations done in Akrotiri, an ancient settlement destroyed following a volcanic eruption on Santorini around about 1627 BC, the split pea plant has grown on the island for more than 3,500 years. The rich volcanic soil and intense sun are perhaps the reason why the yellow split peas from Santorini have acquire the Protected Designation of Origin label by the European Union.

The dish is available all-year around but definitely during Lent as one of the best fasting-friendly dishes, as the devout refrain from eating meat, fish, dairy or eggs.

Here is a recipe sourced from saveur.com should you want to try this tasty dish for yourself.