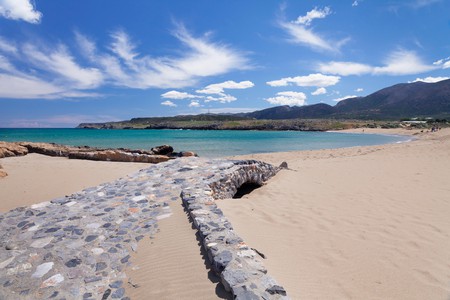 Rich in history and famed for its dynamic foodie scene, Thessaloniki has a number of beautiful beaches on its doorstep – from Agia Triada to Afytos. Escape the city and combine exploration of ancient history with a seaside getaway on a trip to Greece’s second city.

Greece is renowned for its beaches, and there’s no need to choose between a city and beach break – many stellar swimming spots are accessible within a one-hour drive of the centre of Thessaloniki. From the conveniently located Agia Triada to the tranquil coves of Halkidiki, Greece’s northern capital does not disappoint when it comes to places to sunbathe and enjoy the crystal-clear waters of the Aegean. A number of nearby beaches are even accessible via public transport, making it easy to combine sightseeing and sunbathing. Just bear in mind that, thanks to the beaches’ proximity to the city, other people might have had the same idea. For a day on the beach in solitude, be sure to make the trip on a weekday.

Thinking of a Greek getaway beyond Thessaloniki? Join Culture Trip’s eight-day adventure for island hopping from Athens to Santorini for an epic experience with like-minded travellers.

Agia Triada may not be the most picturesque option, but it is the nearest to the city – perfect for a quick getaway. The beach is well organised, with a range of restaurants and bars lining the sandy stretch. If you have a car, you can reach Agia Triada within 30 minutes. Alternatively, you can hop on the 72 OASTH (city) bus from the bus station at IKEA.

A lesser-known option, even among local residents, is the beach in the coastal town of Angelochori. Although there are not as many nearby amenities as, for example, Agia Triada, the Riviera Beach Bar is a one-stop shop for all your beach day needs. Sunbeds are free, provided you order something from the menu, which is reasonably priced and features both Greek and international dishes. Angelochori is a 35- to 40-minute drive from Thessaloniki by car, or about 90 minutes via the 72A city bus from IKEA.

Situated near the town of Epanomi, Potamos Beach is the gateway to the Thermaic Gulf and the Aegean. By virtue of the beach’s position on the open sea, the waters at Potamos are stunningly clear; in addition, the beach’s southwestern aspect reveals a breathtaking view of Mount Olympus over the horizon. As the prettiest beach near Thessaloniki, Potamos is particularly popular among city-dwellers during the weekends. Potamos is only 40 minutes away from the city by car. Thankfully, there is also a summer bus line (70) that connects the centre of Thessaloniki directly with the beach from 1 July.

Moving southeastward, towards the Halkidiki peninsulas, you’ll find the wide Nea Kallikrateia beach. The bustling town and its golden sandy beach are particularly popular among local families, with many Thessalonikians choosing the area for their seaside holiday homes. The beach was awarded a Blue Flag in 2017 and is fully equipped, with sunbeds, restaurants, bars and water sports facilities lining the shore. Nea Kallikrateia is a 40-minute drive by car from Thessaloniki. Alternatively, you can reach it by KTEL (intercity) bus, which leaves approximately every 45 minutes from Thessaloniki’s KTEL Halkidiki bus station.

It is practically impossible to separate the Flogita and Nea Plagia beaches, which lie right next to each other a short distance from the entrance to the first of Halkidiki’s peninsulas, Kassandra. Both beaches are dotted with palm trees, connected by a long cobblestone promenade. They have Blue Flag status and are well organised, featuring restaurants, bars and full access for visitors with limited mobility. The beaches are lined with parks and green space, making them ideal for families with children. Flogita and Nea Plagia are around 45 minutes away from Thessaloniki by car and are also accessible via the KTEL (intercity) bus, which leaves approximately every 45 minutes from Thessaloniki’s KTEL Halkidiki bus station. 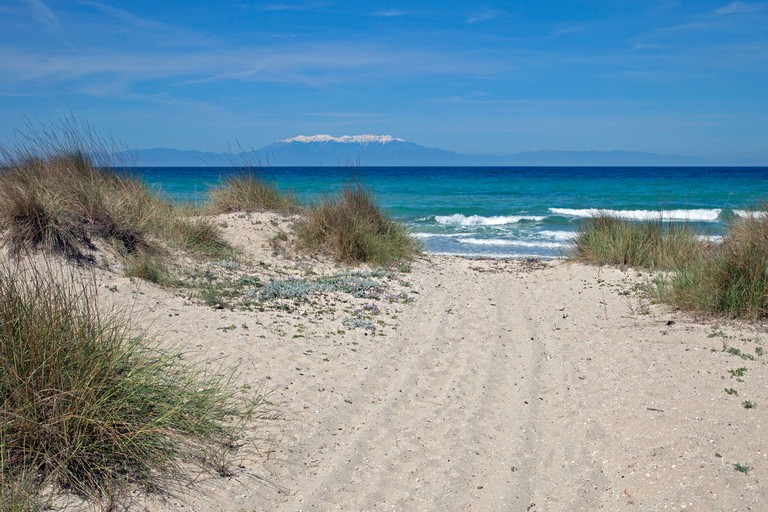 Perched along a 7km (4mi) stretch of white sand, Sani is one of the most stylish beaches to be found within an hour of Thessaloniki and is known for its chic restaurants and boutiques. Set within a dense pine forest, here you will find an awe-inspiring combination of luxury and natural beauty, with unparalleled views of the Aegean and Mt Olympus. If you are in need of a little pampering, don’t hesitate to visit the nearby Sani Resort for a spa day. Sani Beach is an hour away from Thessaloniki by car, on the first “leg” of Halkidiki, Kassandra. 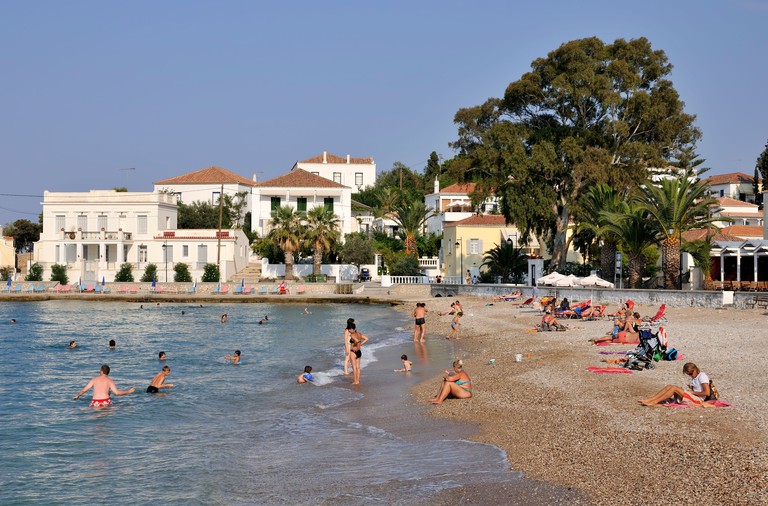 Known for its popular harvest festival in early September, Agios Mamas is a quaint village with a wide sandy beach and shallow, clear waters overlooking the Toroneos Gulf. Just a one-hour drive from Thessaloniki, between the first and second peninsulas of Halkidiki, Agios Mamas is exceedingly popular among Thessalonikians and, as such, has all the amenities you might need. For history buffs, the nearby ancient Olynthus archaeological site is definitely worth a visit. You’ll find artefacts from the Neolithic Period on display, as well as the oldest Bronze Age cemetery found in the region. 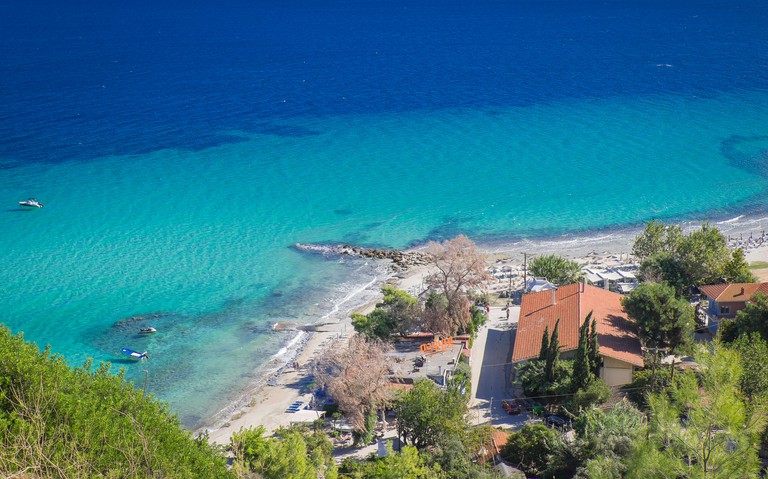 Whether you like lively beach bars or are looking for some seaside solitude, you can’t go wrong with Afytos Beach. This long, sandy beach sits beneath a charming village of the same name and offers views of the Toroneos Gulf and Sithonia (the second leg of Halkidiki). The waters are shallow and crystal-clear, making it a perfect choice for families. Afytos Beach is an hour’s drive by car from Thessaloniki, and can also be accessed by bus from Thessaloniki’s KTEL Halkidiki bus station. 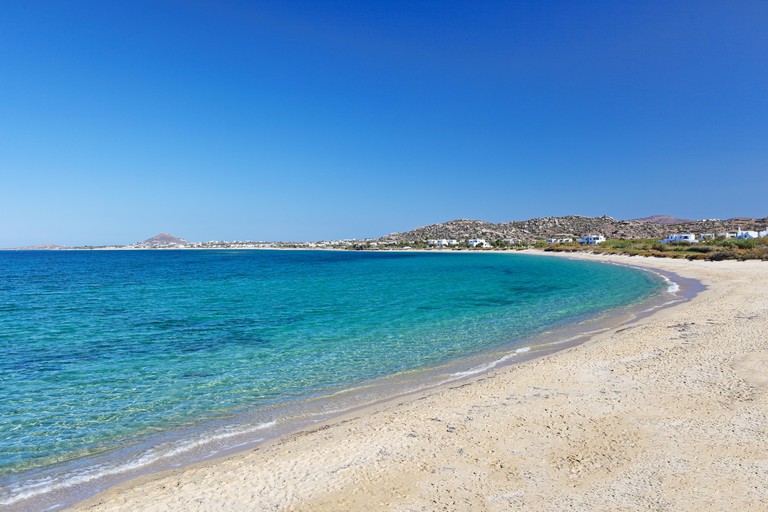 Though Halkidiki is far and away the most popular choice for a day at the beach from Thessaloniki, travel in the other direction (westward) to discover a host of other idyllic spots. Resting on the foot of Mt Olympus, Plaka Beach is arguably the area’s best-kept secret. Hidden within a picturesque cove, this pebbly stretch is perfect for combining a summer day trip to the sea and the legendary mountain. Plaka is situated 90km (56mi) southwest of Thessaloniki and can be reached within an hour by car. The picturesque village of Litochoro, on the eastern slopes of Mt Olympus, is only a few minutes’ drive away, while the nearby Enipeas River canyon offers another enticing option for hiking enthusiasts.

Thinking of a trip to Greece but short on time? Join our five-day Mini Trip to Athens and Serifos – you can explore the capital with our Local Insider, then hit the beach on a picturesque island.