Ancient Greek Sculptures That Everybody Should Know 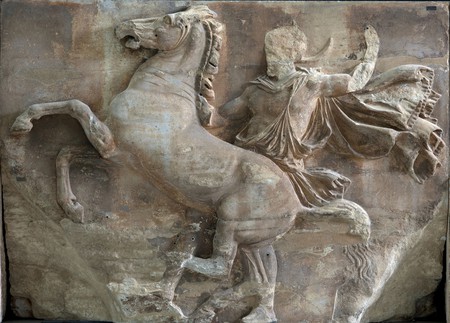 The legacy of Ancient Greek sculptors remains powerful today. Visitors from around the world travel to pay homage to the precise forms and the masterly command of the materials that these original sculptors were working with – often seemingly immovable hunks of marble and bronze. Here are some of the most famous works by renowned Ancient Greek sculptors that you need to know.

These classic forms are abundant in Ancient Greek history, and they remain integral to understanding Ancient Greek sculpture. Kore and Kourai were simple, human-like figures who often wore peaceful, transcendent smiles and featured accessories such as hats or vases.

The sculptures were placed over tombstones during funeral rites and offered as sacrifices during religious rituals. How ornate and decorative a statue was reflected the social standing of the individual offering it.

Visiting both the Acropolis Museum and National Archaeological Museum in Athens helps to understand the wealth of diversity amongst these statues. A notable highlight amongst many is The Peplos Kore, a woman who stands out for the detail and realism of the sculpture. She was first named ‘Peplos Kore’ as archaeologists originally believed she was wearing a minimalist, peplos dress. However, later research has identified that she is the only one to be dressed in this way, suggesting that the figure may be a goddess.

An impressive statue from the classical era, Discus Thrower by Myron depicts a man in the midst of throwing a discus. The original bronze statue was lost, but copies of the sculpture remain, most notably the one on display in the National Roman Museum in Rome.

Myron depicted the athlete in action, his body twisted and muscles stretched to the most extreme position. The Athenian sculptor created the transience and skill of athleticism, how a true athlete can master his craft and achieve the impossible in a fraction of a moment. The whole sculpture evokes a moment of tension, the expectation before the release of the discus. Myron was considered one of the first sculptors working at the time to create such lifelike depictions in bronze and marble; this work is a testament to his impressive skill. 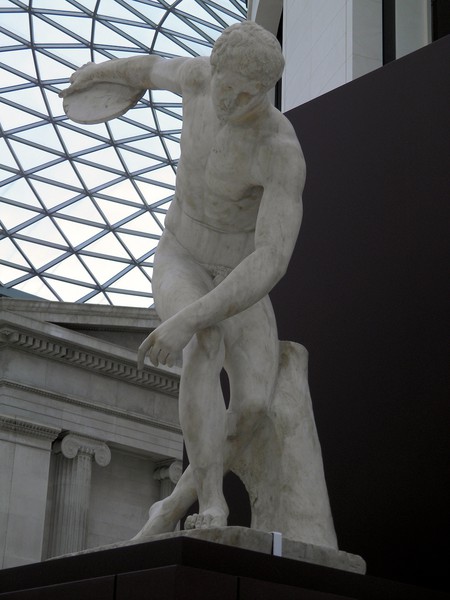 The Acropolis is a locus of many of the most impressive and notable Ancient Greek sculptures, and visitors will discover that the Ancient Greek sculptor Phidias is to thank for many of these designs. During the reign of Pericles (495-429 BC), Athens enjoyed years of artistic innovation, and the creative scene in the city flourished. Pericles favoured Phidias as a sculptor, and he was commissioned to create the Parthenon at the Acropolis alongside numerous other works in the city.

One project that stands out amongst his many impressive works is the Parthenon Frieze, an ornate depiction of the Great Panathenaia – a large festival that paid homage to the goddess Athena. The Frieze comprises 115 blocks, and each tells a separate story from the festival, rendering it a true narrative masterpiece carved into marble. 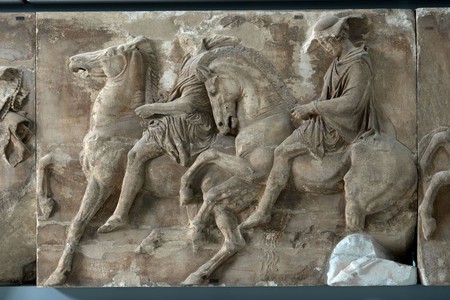 The towering figure of Athena that stands in the National Archaeological Museum is a humbling piece of work. Considered to be the most loyal reproduction of Phidias’s original sculpture, made in 438 BC, this version was created between AD 200 and 250 and is thought to be about 12 times smaller than the original.

The work sees Athena dressed in the traditional Attica Peplos dress and wearing a crown adorned with three crests. In her palm, she holds Nike, goddess of speed and strength, while her shield features the king Erichthonius who, according to Greek mythology, was born from the earth and ruled by Athena. As a testament to Athena’s power, this imposing sculpture is near unparalleled. One can only imagine the fear and reverence the much larger original would have evoked. 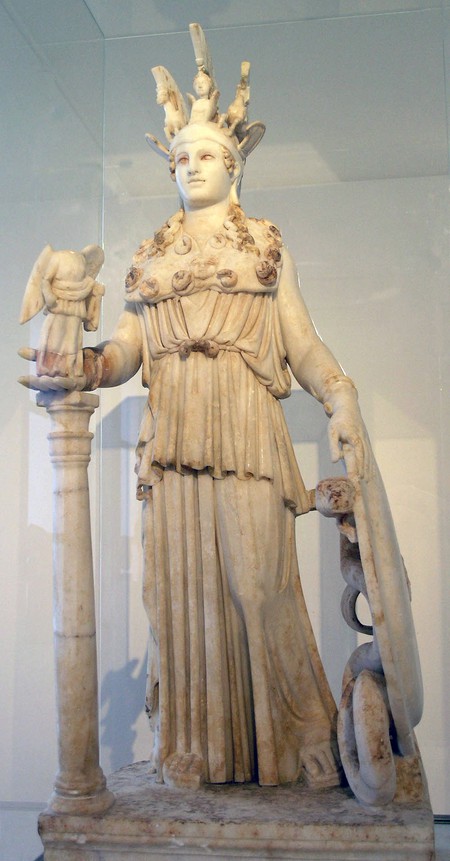 Another work by Polykleitos, the ‘Spear Bearer’ is a peak example of classical Greek design. The Ancient Greeks pursued the image of perfection in the human body through mathematically precise proportions. The renowned sculptor aimed to investigate the idea of perfection by rendering the most accurate version of the human body, where every part was exactly in proportion to the others. The result is a mesmerisingly vivid depiction of the male form, one that set a precedent for other Ancient Greek sculptors to follow.

Indeed, Polykleitos is reported to have referred to the sculpture as The Canon – an invocation for the work to act as a template for others to measure their own proportions and precision of approach by. Although the original bronze version was destroyed, a marble copy created by the Romans that was found in Pompeii still exists in good condition today. 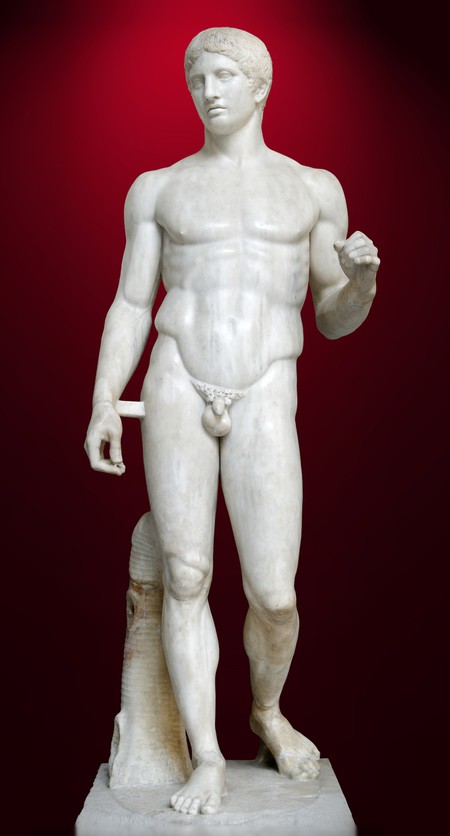 Another famous sculpture by Polykleitos, The Diadoumenos sees the sculptor again pay homage to mathematical precision in the production of lifelike human forms. The original sculpture depicts an athlete with a ribbon in his hair, suggesting victory and celebrating the prowess of the male form. Romans were especially taken with the beauty of this work, with the original sculpture reportedly reproduced in marble 25 times. 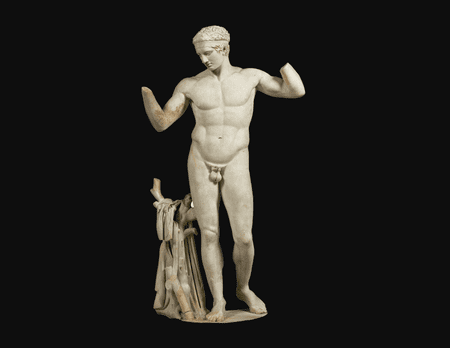 Marble statue of an athlete binding his hair (diadoumenos), found on Delos, Cyclades. Copy from about 100 BC of an original from 450-425 BC. | © National Archaeological Museum of Athens

Created by the sculptor Pythokritos, the Winged Victory of Samothrace is renowned as an example of design from the Hellenistic period and continues to spark strong emotions from visitors who visit it at the Louvre.

The woman is created from Paros marble, while the platform she stands on features marble found on Rhodes. Depicted as if manning the helm of a ship or in mid-flight, the Winged Victory of Samothrace effervesces with energy as her clothes pull and fold around the body. The forceful drape of the clothes suggests they are responding to an external force, such as wind, evoking energy and a feeling of triumph. It has also been noted that Pythokritos’s work is also an early example of a sculpture being used to represent broader themes of justice, vengeance and peace. 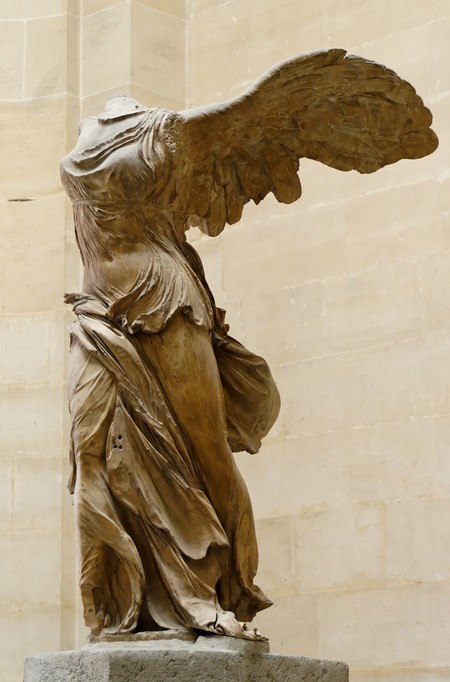