Amazing Day Trips to Take Around Skiathos by Boat 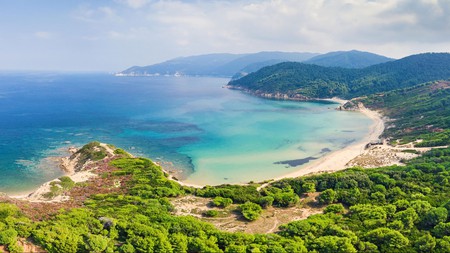 The beaches Mandraki, Elias and Agistros are among the finest on Skiathos | © Constantinos Iliopoulos / Alamy

Feel like you’re the star of your own show on the Greek island of Skiathos, best known for being one of the filming locations featured in the hit Hollywood musical Mamma Mia. Movie fame aside, the island has more than 60 gorgeously rugged beaches backed by steep white cliffs and thick pine forests as well as plenty of rickety tavernas and cosy bars in sleepy seafront villages. To see some of the island’s best-kept secrets, it’s best to hire a boat. Here we reveal some of the best sailing trips to embark upon around this special island.

Explore the coastline around the Greek island of Skiathos by chartering a motorboat or yacht with SamBoat. 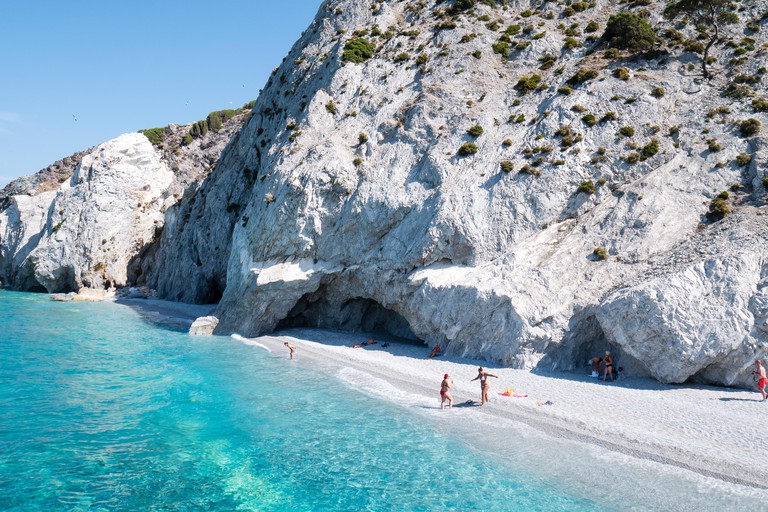 This knock-out of a beach is only reachable by boat from the port at Skiathos town and sits on the northeastern tip of the island. Expect wide sugary sand framed by soaring white cliffs. What makes this spot really unique is the natural rock bridge which spans the sand and arches over the crystal clear sea. The magnificent “blue” and “black” caves are located just before Lalaria and are definitely worth a visit. Be warned, there’s not a hint of a beach bar along this strip so take refreshments ashore. 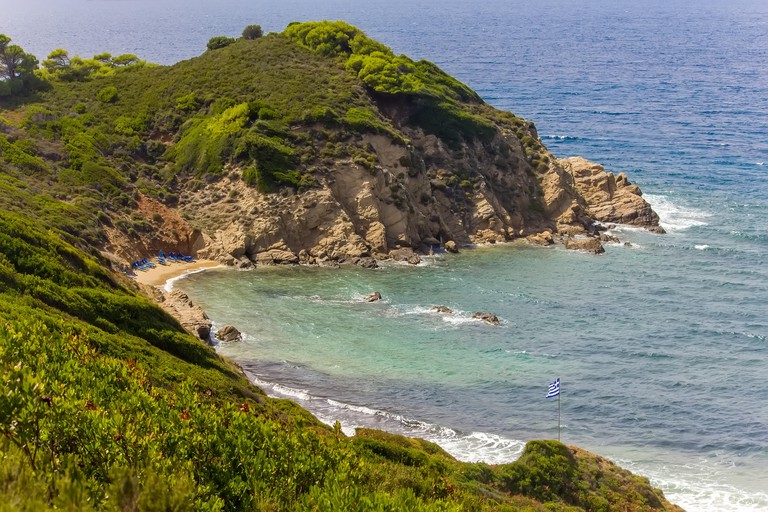 This calm beach sits on a stretch of unspoilt coastline close to undulating hills carpeting the Koukounaries ecological park on the west coast of the island. It’s roughly 15km (9mi) west of Skiathos Town. The golden sands are superbly soft and the waters clear. There are no watersport rentals on the beach but there is a shack-like taverna where you can stack up on snacks and drinks. As the beach is sheltered by pine trees and off the beaten track, it attracts the odd nudist. 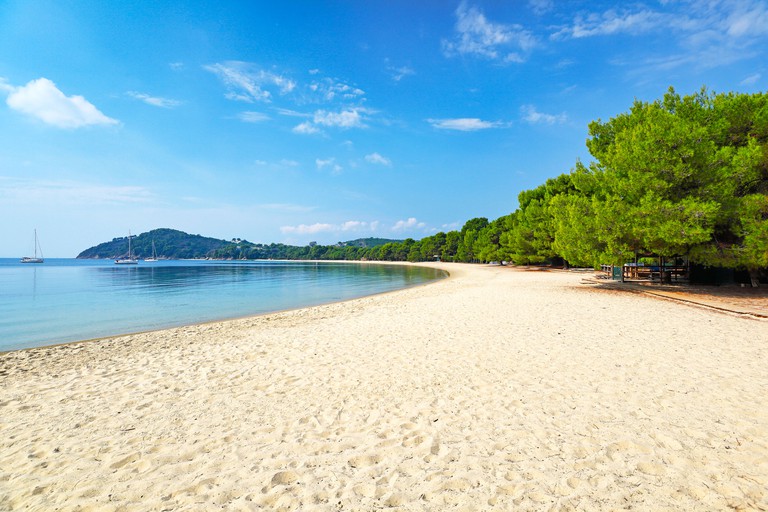 This is the best-known beach in Skiathos but this stretch of sand never gets overcrowded even in the summer months. Sail into the bay and alight with fragrant pine trees scenting the air and sands as soft as talc underfoot. Thanks to its paradisiacal appearance, Koukounaries has been voted the most unspoiled natural beach of the Mediterranean. Despite its untouched guise, the beach has good amenities with restaurants and small hotels peppering the shoreline. There are also watersports on offer, a beach bar and sun loungers for rent. 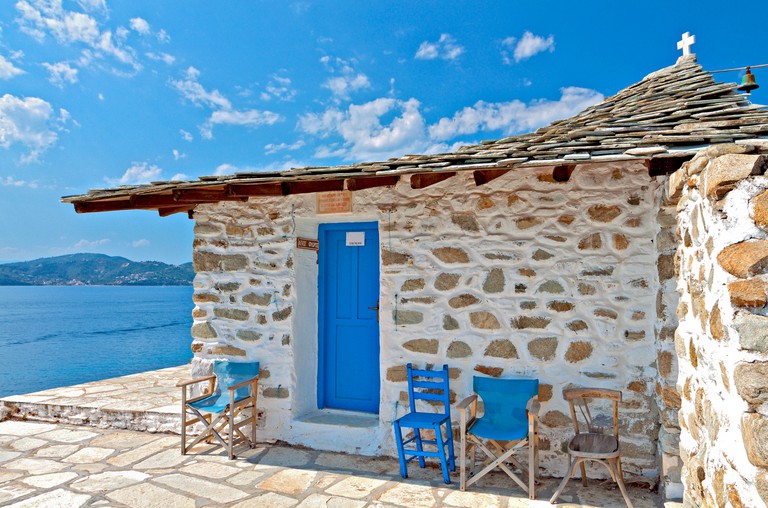 Stand beneath the clock tower in Skiathos town and you’ll get a clear view of Tsougria Island. It’s only a short ride over to this outcrop with the boat ride costing around €10 if you don’t have your own vessel and cruises regularly stop there. When you arrive, bask on one of four sandy beaches or hike up the island’s rocky ridge where you’ll be rewarded by panoramic views of Skiathos and nearby Skopelos. Tsougria is uninhabited but during summer a slickly-styled beach bar opens on the northwest coast. 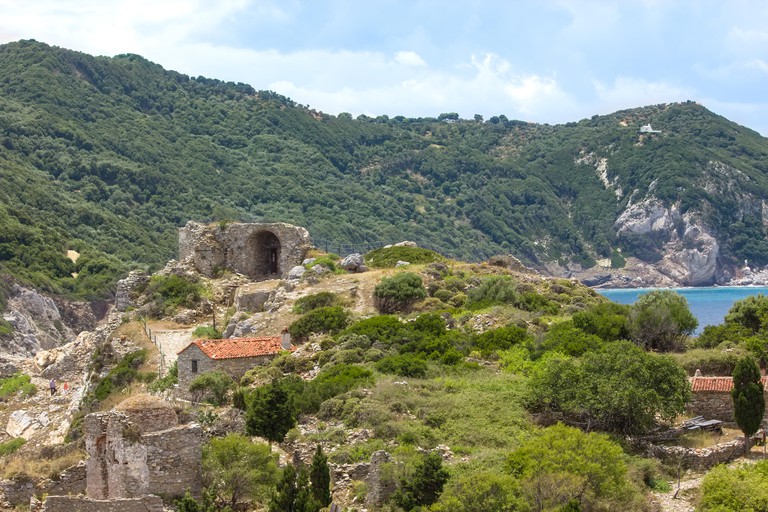 The easiest way to access this 14th-century abandoned castle on the northern tip of Skiathos is by boat from the town. From there it’s a strenuous hike upwards. The castle was restored after Greek independence from the Ottomans in the 1830s and has moved location more than once to avoid raids by pirates. The gate and drawbridge give this fortress a fairytale feel, while a mosque and three churches are other attractions that sit on the site. The largest church, Agios Nikolaos, is open to the public. 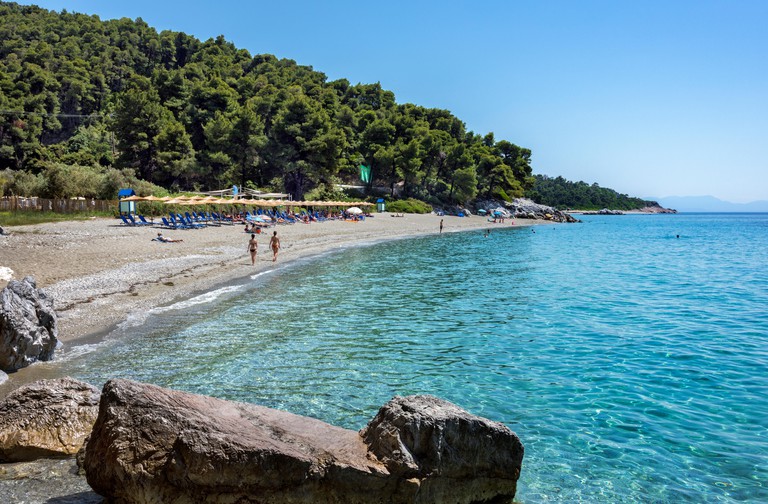 You may recognise the island of Skopelos as a Mamma Mia filming location. If you think Skiathos is green, wait until you see this place. Set to the east of Skiathos, and accessible by boat in around 80 minutes, more than half of the island is covered by virgin pine forest. Olive and almond trees also grow here, while honey is another local product. If you venture into the main town you’ll find a mix of charming tavernas and bars. Or if it’s a spot of relaxation you’re after, the island’s 70km (43mi) of coastline offers tree-lined shingle and sandy beaches including Kastani beach which also served as a Mamma Mia backdrop.

Wander through the narrow cobbled streets of Skopelos town to Rodi, an elegant courtyard restaurant festooned with orange trees and wildflowers. The menu features classic Mediterranean dishes with a twist. Meaty highlights include spiced lamb tagine and pork chops with citrus sauce and caramelised apples. The local cheeses are another must-try and all of the dishes are flavoured with herbs and greens picked from the kitchen garden. After dinner head to Mercurius for a fill of the best cocktails on the island.

With a fine collection of golden beaches, evergreen pine forests and olive groves, this idyllic location is well worth marking on your Skiathos sailing itinerary. The best thing is the Punta peninsula is only a few minutes from Skiathos Town and very close to the airport. Drop anchor at the gorgeous windswept Lazareta beach for a lazy day of sunbathing and swimming with Greek snacks back on board to keep your energy levels up. 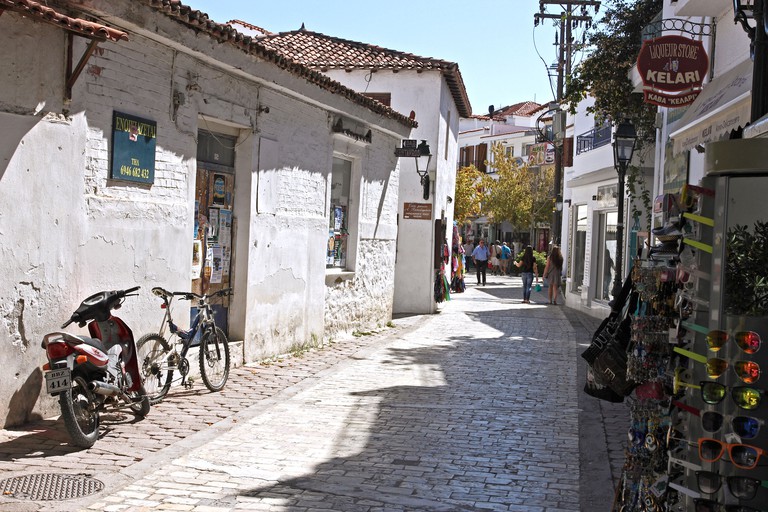 The lively main street in Skiathos old town is the perfect place to let your hair down after a day at sea. Before you decide on where to have dinner, stock up on local delicacies and products to take home from the upmarket Ergon deli which also has outposts in Athens, Thessaloniki and Mayfair, London. Nicos is a limoncello-hued taverna popular with locals and serves delicious grilled seafood. Meanwhile, the best spot for sunset cocktails and a view over the harbour and Aegean sea is The Windmill.

Pretend you’re on the set of Mamma Mia by chartering a yacht through SamBoat to explore Skiathos.