A Wellness Guide to Santorini, Greece 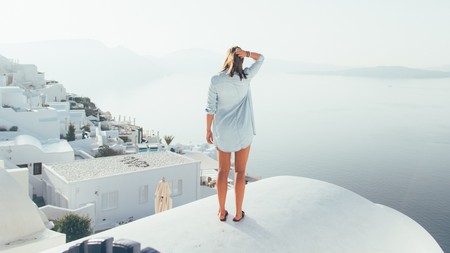 Beyond its iconic whitewashed houses, Santorini has plenty of options for health and wellness seekers. From health-giving treatments at local spas to the flavours of local cuisine, discover Santorini’s wellness credentials.

Famed for its spectacular sunsets and once home to the nature-loving Minoans, this world-renowned volcanic atoll basking in the southern Aegean Sea draws millions of visitors each year, and is an ideal health and wellness destination.

Archaeological finds at the ancient site of Akrotiri have established that the Minoans were already were eating the olive oil, seeds, fresh seafood and pulses that are the basis of the famed Mediterranean Diet, and which can still be found in many of the island’s traditional dishes. But food isn’t the only healing factor on this picturesque Greek island: with countless hiking paths and yoga spaces, along with several mineral-rich thermal springs and countless award-winning hotel spas, there’s something here for every taste.

Fill up on the Mediterranean diet

Alternatively, seek out Kali Kardia, a family-run taverna in the middle of nowhere where they make the best creamy split pea purée fava and pseftokeftedes (bean fritters) on the island.

You might think it’s hard to get off the beaten track on one of the world’s most popular Greek islands, but Nikos Boutsinis of Santorini Walks says differently. “There is a network of about 60 miles (100km) of paths in Santorini, and hardly anyone’s walking on them,” he says.

Nikos’s walking tours take hikers out along deserted tracks to discover the island’s abandoned Byzantine churches, near-deserted hamlets and vineyards where vines grow in the tight, nest-like circles that protect them from wind and heat. “This is a side of the island that visitors rarely see,” he says.

Santorini might not be renowned for its beaches, but there are a few that are really worth discovering. One of these is Kolumbo, but there’s no public transport to reach this endless black sand beach fringed by cliffs, and you’ll have to walk the last few hundred metres on foot. The best way to discover the island’s pristine seascapes is to charter a small motorboat for the day and buzz over to Akro Mavro Vouno, or “The Black Mountain”, an isolated black sand and pebble beach near the Akrotiri Lighthouse that is the perfect place to soak up some rays in peace.

Packed with antioxidants, red wine (consumed in moderation) is renowned for its health-giving properties. With that rich volcanic soil and lava-hot climate, it’s hardly surprising that wine has been made on Santorini for thousands of years. Mesa Gonia is a tiny hamlet where the Roussos family have been producing wine since 1836. Here, you can visit the low-vaulted canava wine cave and the oak barrels where the wine is fermented, then taste some of the family’s wines, including the fruity purple Caldera Roussos and Santorini’s syrupy sweet Vinsanto wine.

Crowded Oia might be renowned for its spectacular sunsets, but if you stroll along the tiny cobbled path which leads around the caldera rim to Imerovigli, the views are just as spectacular, but you wont need to use your elbows to see it. The lighthouse on the remote southwest end of Santorini is also a fabulous place to watch the sun dip behind the island’s volcanic crater, but if you really want to escape the crowds, take a boat from Ammoudi port to the small island of Thirassia just opposite and experience what Santorini was like several decades ago.

Check into a cool hotel

Although Pyrgos was the island’s capital up until the 1800s, tourists rarely stop in this hilltop village which is home to Carpe Diem, a hip boutique hotel haven with panoramic views. Another laid-back spot that’s close to the sights but away from the crowds, Omma Santorini sits on a narrow spit of land high above the caldera and has an eye-catching infinity pool and a cave-like spa perfect for pampering. Couples seeking more privacy should check out Canaves Oia Epitome, a sumptuously luxurious boutique hotel with villa-style accommodation near the tiny fishing village of Ammoudi.

Soothe the soul with music

With recent studies showing that music improves mental and physical well-being, Symposion by La Ponta, a cultural centre set in an old winery in the Santorini hamlet of Megalochori where owner musician Giannis has created a thrilling immersive experience combining music and mythology, is a healing journey in itself. “We take you back to the origins of Greek myth and music,” says Giannis, who plays everything from an Apollonian lyre, to a 2,000-year-old Greek version of the bagpipes called the tsambouna. “Guests are also welcome to join us in a musical instrument-making workshop,” he says.

Get pampered at a spa

Spa therapy has been a vital part of Greek life for thousands of years, and philosophers ranging from Aristotle to Plutarch mention the health benefits of water therapies, massages and medicinal diets. Superb facilities at the caldera-view Santo Maris hotel, which is one of the best spa hotels on Santorini, include sauna, steam bath and cryotherapy treatments, along with a range of massage therapies. For the best pampering in glorious privacy at this Oia hotel, which was recently named Greece’s Best Resort Spa in the World Spa Awards, book the spa therapy villa, which has its own couples treatment beds.

Doing yoga or meditating on sultry Santorini is a great way to connect with the unique spiritual vibe of this island that was created, according to ancient legend, by Euphemus, the son of Poseidon. Veronika’s yoga centre Caveland is situated in a beautifully renovated cluster of caves, which is now a hip hostel. “We offer classes in yin, nidra, hatha and dru yoga,” she says. “Santorini is a wonderful place to do yoga because the island has such a long history,” she adds.

Alternatively, head for Anassa Yoga where Ionna Tsotra gives lessons in her light-filled yoga studio looking out over the mountaintop village of Pyrgos.

Seek out the sulphur springs

Known since antiquity for their healing properties, Greece’s hot springs are packed with healthy minerals ideal for soothing body and mind. The best way to experience Santorini’s volcanic healing springs is to take a catamaran cruise across the caldera to the volcanic island of Nea Kameni, which was formed after an eruption in the 1570s. Here, you can swim in the (rather fragrant) sulphur springs, before wrapping yourself in a body mask made from mineral-rich mud.

Alternatively, hike the dusty trail that leads from the Boutari winery in the village of Megalochori to Thermes Beach, to discover the blood-warm springs that have bubbled up in this secluded spot since Minoan times.