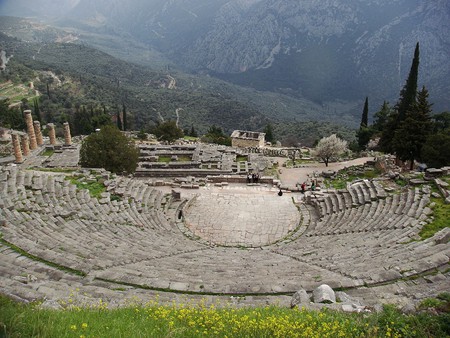 The Theatre of Delphi from above, with the base of Temple of Apollo | © Challisrussia/WikiCommons

Considered to be one of the most important archaeological sites in Greece, the sanctuary of Delphi, a famous ancient oracle, is located at the foot of Mount Parnassus and was a major cultural and religious center during its time. Read more about this stunning sanctuary where people from near and far used to come to consult the oracle.

Dedicated to the god Apollo, the sanctuary of Delphi was home to a famous oracle who gave predictions to people and ancient authorities, and it was considered to be the center of the world. According to mythology, it was the point where two eagles – one from the east and the other from the west – that were sent by Zeus met. The history of the sanctuary can be traced back to ancient myths, which state that the place was the lair of a dangerous serpent named Python, who was killed by Apollo. 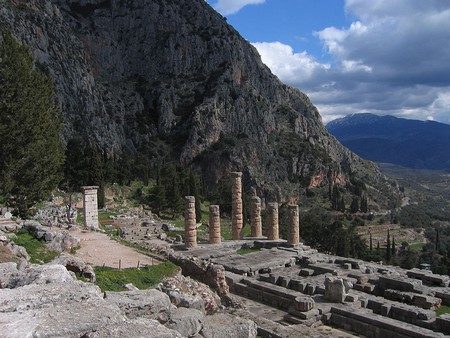 Delphi was also home to the Pythian Games, ancient competitions which took place every four years in honor of Apollo. Aside from the usual athletic events, it also included poetry and musical contests. In fact, when the games were held for the first time in the 6th century BC, they only included musical competitions, with athletic games being added over time. The Pythian Games completely stopped in the 4th century CE.

Though the occupation of the sanctuary can be traced back to the Neolithic period, the majority of the ruins still standing today date from the 6th century BC, which corresponds to the most intense period of activity at the site. The first stone temples, belonging to Apollo and Athena, were built towards the end of the 7th century BC. Literary and archaeological records show that other gods, including Artemis, Poseidon, Dionysus, and Hermes, were also linked to the sanctuary. 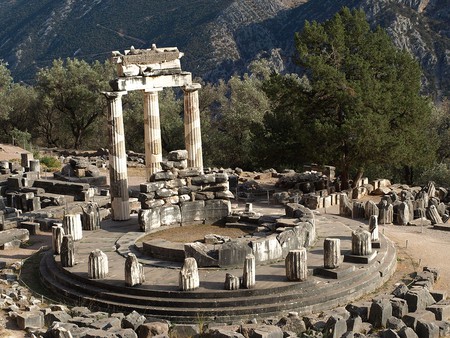 Tholos at the Athena Pronaia | © Mr.checker/WikiCommons

But Delphi is perhaps better known for the Pythia, a priestess who would answer questions put forward by those who came to consult her after a ceremony was executed. Rising to worldwide fame during the 8th century BC, the oracle, given by the priestess in a gas-induced state of ecstasy, was interpreted by a group of priests and put into elegant hexameters. Exerting a strong influence throughout the Greek world, the oracle was consulted before major undertakings, with individuals, city-states, and foreign dignitaries traveling from around the world to seek advice from her.

Though its use diminished considerably with the rise of the philosophical movement of Rationalism in the 3rd century BC, the site was mostly destroyed by Byzantine emperor Theodosius I in 394 BC. And the rise of Christianity saw the site demolished even further. It was only in 1891 that archaeological research started, headed by the French School of Athens, with the blessing of the Greek government, and from then on, many things were discovered, including the two Delphic sanctuaries. The Treasury of the Athenians was the only monument to be reconstructed completely, which took place from 1903-1906, and the Altar of the Chians, the temple of Apollo, and the Tholos were all partially restored.

The Delphi Archaeological Museum, at the foot of the impressive complex, is definitely worth a visit as it houses an outstanding collection of artifacts from the site.